Accessibility links
A Lot Of Sound And Fury In 'The Infernal' Mark Doten's debut novel has some beautiful writing in it, but critic Jason Sheehan says the book suffers from too much verbal and typographical trickery, and not enough actual story.

A Lot Of Sound And Fury In 'The Infernal'

A Lot Of Sound And Fury In 'The Infernal' 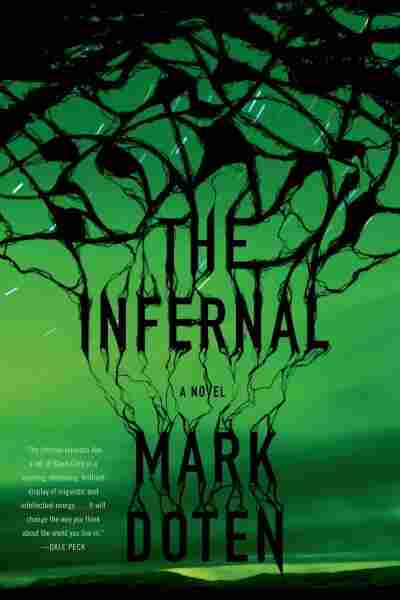 I feel that it would be appropriate here to discuss Mark Doten's novel, The Infernal, in fragments, incomplete sentences, blocks of text walled off by line breaks, and nonsense. I want to do this because that's what he did in the writing of it — a trick that (maybe) looks clever at first glance, but isn't.

I feel that to shatter my lines with insertions of randomly-generated junk characters would be apt. To run pages through a vertical shredder and reassemble them like bad photocopies. And why? Because Doten does that, too. This whole book isn't just peppered with typographical hijinks, it's shotgun-blasted with them. A riot of caps and wingdings which I would love to say merely got in the way of him telling a story, save for the fact that there is no story to get in the way of.

Or, being generous, let's say that there are many stories, told from many different viewpoints, all winding together and tangled and going nowhere. All pull and no motion.

The Infernal is, ostensibly, a book about the War On Terror. A post-9/11 novel of global war, global politics and generalized madness. There is a meta-narrative which (I think) is about an interrogation machine capable of magically tearing the unvarnished truth from the cells of its victims.

In the beginning of the book, it is attached to a badly burned boy found on some battlefield or another, and this boy (for reasons never actually explained) begins spouting the stories of dozens of strangers. Of Condoleezza Rice and Paul Bremer, a wounded soldier back from Iraq, Osama Bin Laden, Mark Zuckerberg, Nathan Myhrvold and Mark Doten himself (which, right there, should tell you all you need to know about the meta-ness of this whole bonkers experiment).

Oh, but wait! These are not their actual stories but invented, insane caricatures. Rice as the foundling, crippled sister of Bremer, Bin Laden as some sort of cave-dwelling mystic, Zuckerberg and Myhrvold as videogame players (or characters?) in possession of a doomsday weapon.

And I know what you're thinking. That sounds funny, right? It's not. Wacky and profane? No. Doten also weaves in discussions of the Singularity, total information awareness, PTSD, torture and rendition, Green Zone politics, race and terror, which all might've been daring and vital — wrapped up as they are in a treatise on the literal and figurative insanity of our modern age — but aren't. What they are is cluttered. The book is a mess. A deliberate one, but still a mess.

There are those who might see bravery in this sort of experimentation — in considering only the artifact of the book and not its potential reception by the fickle public — but that's not bravery, its bravado, which is a very different thing. Oftentimes being straight and forthright in the face of a difficult topic is the bravest of all possible options, and one which Doten doesn't for a moment consider.

And look, I love the weird. Probably more than I ought to. I give full credit to those who want to tell their tales in original and absurd ways. I cut my teeth on Mark Leyner and was an only somewhat grudging fan of Ben Metcalf's Against The Country, but The Infernal seems to be built on the basis of obfuscation for the sake of style, which is almost never the right way to go.

Worse, I know for a fact that Doten can write. There are pieces of this sprawling monster that are lovely and honestly horrifying. The story of the wounded soldier, though fully and unapologetically insane, works as an excellent short story, nearly devoid of gimmickry. The idea of the interrogation machine and the way it operates is a cool one, just poorly deployed. And there are runs of words in there which hang together as well any modern author's attempt at bringing some structure to the madness of our age. I just wish he'd had the spine to play things a little straighter. To reign in his most excessive literary impulses and just tell the goddamn tale.

But The Infernal as a whole is just one of those books too in love with its own internal conceits; a novel written not for readers but for those who love to argue about the novel-as-object more than they love the words. It's an elbow-patch book, fodder for lit professors, likely attractive to those young enough (or cynical enough) to believe that oddness and iconoclasm equals genius, but that just ain't me.

I love stories, but I do not love this modern notion that plot doesn't matter and characters don't matter and story doesn't matter and nothing, in the end, matters so much as authorial intent. That's all poison to me. And while Mark Doten is far from responsible for this, his is the book in front of me; his non-story a glittering, racing-striped, jumbled-up, bedazzled, shouty and over-proud avatar of the style.

I don't hate it, I'm just sad for it. It's a novel born into a terrible age, cursed by urges toward a fresh art that almost never lead anywhere good, and so full of rage and mockery that it chokes to death on its own innovation.