Accessibility links
Police Are Learning To Accept Civilian Oversight, But Distrust Lingers More than 200 civilian review boards investigate police misconduct in cities across the United States. Reformers say they're essential. But officers tend to be wary of them. 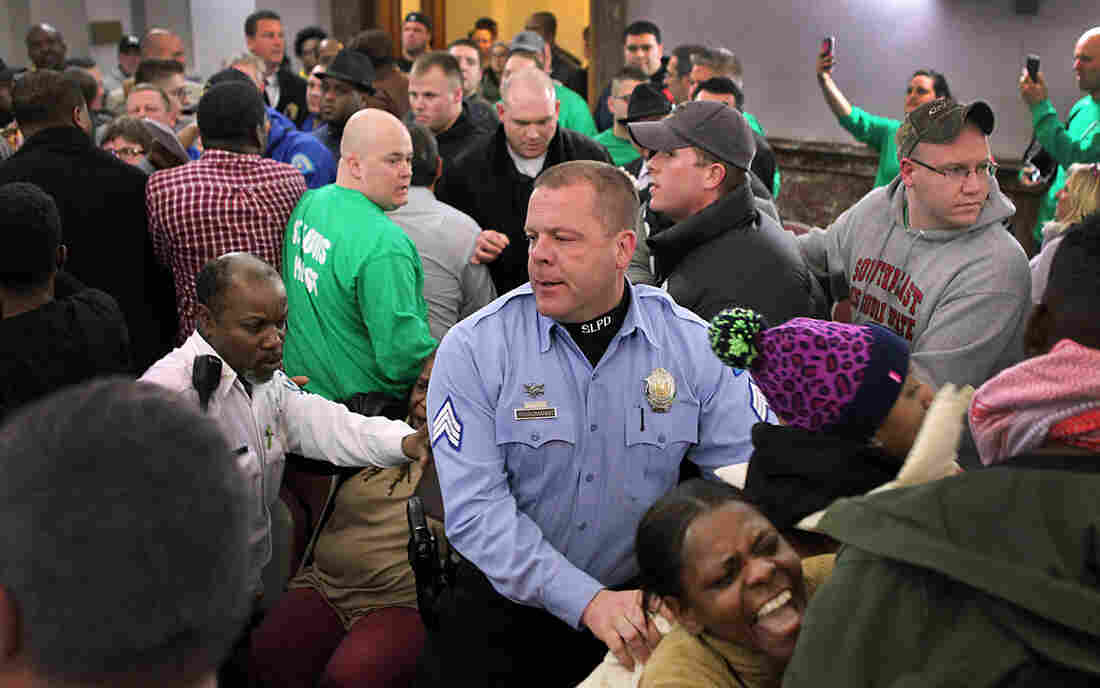 Late last month, a scuffle cut short a St. Louis Board of Aldermen meeting where a committee was to discuss a proposed civilian review board for the city's police force. Robert Cohen/Courtesy of St. Louis Post-Dispatch hide caption 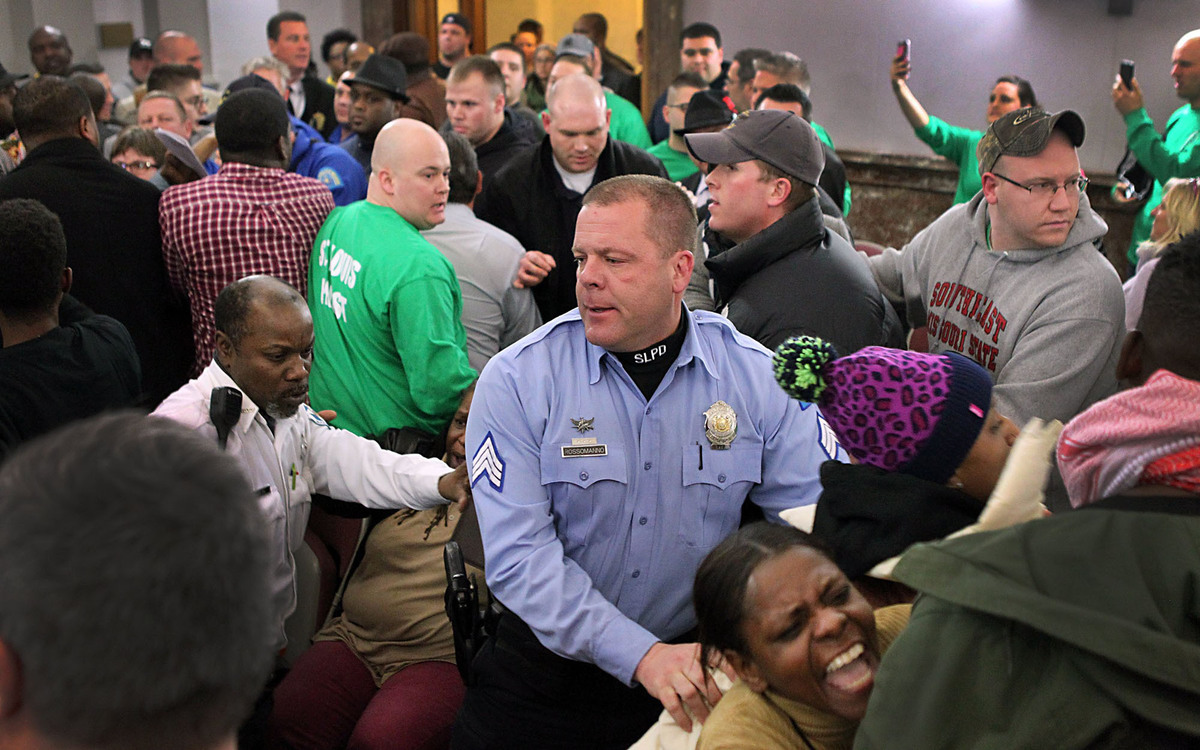 Late last month, a scuffle cut short a St. Louis Board of Aldermen meeting where a committee was to discuss a proposed civilian review board for the city's police force.

Late last month, during a meeting of the St. Louis Board of Aldermen, a shoving match broke out among members of the public — some of them off-duty police officers.

The cause of the tension was a proposal to create a new civilian oversight authority for the police. Advocates of police reform like civilian oversight, but police officers say the boards are often politicized and unfair to them.

The concept of civilian police oversight isn't new. In 1965, New York Mayor John Lindsay proposed including civilians on a review board as a way to address complaints from minority groups about police misconduct. But the move backfired; the police union and conservatives such as William F. Buckley rallied against civilian oversight, and voters later defeated the idea in a city-wide vote, returning the board to police only. It took more than two decades for civilian oversight of police to be restored in New York.

The idea fared better in other cities. In Kansas City, Mo., the Office of Community Complaints was the brainchild of a personal injury lawyer named Sid Willens. He says his eyes were opened to the problem of police accountability in 1965, when he tried to get justice for a client who'd been badly beaten while handcuffed. Willens says the police department's internal investigation simply confirmed the officer's version of what happened. "It's like having the fox guard the chicken house," Willens says.

Willens proved that his client had been mistreated — and in the process, he concluded that the Kansas City police needed what he called an "ombudsman," an independent entity to address complaints. The department resisted at first, but in 1970 gave in.

"Once the cops got used to it, it worked," Willens says. "And it's still working, because what you're doing is simply trying to do what every business tries to do, [which] is get rid of the rotten apples. And there are very few overall."

Today there are more than 200 civilian oversight entities around the country, though their powers to investigate and punish officers vary. The entities are usually the product of contentious negotiations with police unions, which tend to distrust them.

"You need to have an appropriate mindset towards policing," says Jim Pasco, the national executive director of the Fraternal Order of Police. He believes civilians just aren't qualified to judge whether a cop followed a department's rules governing use of force.

"The fact of the matter is, an officer has to make a split-second decision involving life or death," Pasco says. "And the civilian review boards tend to, by definition, be made up of civilians who have no particular experience or insight into what went through that officer's mind, what the circumstances were and how desperate things can become in that nanosecond."

Pierce Murphy, the director of Seattle's police oversight entity, the Office of Professional Accountability (OPA), doesn't agree. "I don't think it necessarily takes having been in a squad car or walked the beat to be able to take the evidence, weigh it and decide whether the rule is followed or not," he says.

Murphy's office investigates police misconduct. While police sergeants work for him, he's a civilian, and he's the one who decides whether to pursue a case. The city is now trying to put even more distance between the OPA and the police department, in response to Justice Department pressure for reform.

Murphy has moved his office two blocks away from police headquarters. This way, he says, "People don't have to go to the police department if they want to complain about the police."

These days, when federal authorities investigate a city's police department, one of the main things they insist on is a civilian review of complaints. It's a philosophy that's in ascendance again in the post-Ferguson landscape, but it's one that officers continue to resist, not just in St. Louis, but in other cities as well, such as Newark, N.J., which announced the creation of a review board last month.

In St. Louis, after the shoving match, a Board of Aldermen committee gave preliminary approval for the creation of a civilian oversight authority. The full board may vote on it in April and May. Mayor Francis Slay told reporters he supports the bill.