Accessibility links
Review: Of Montreal, 'Aureate Gloom' New ideas permeate the band's 13th album, on which every song finds a way to surprise. Mastermind Kevin Barnes mixes a love of rock, funk and disco with unexpected ways to expand the brain. 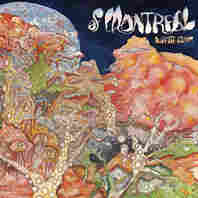 In a recent interview, Of Montreal mastermind Kevin Barnes described Aureate Gloom, the band's 13th full-length album, as "sort of all over the place musically," which is really something for an artist whose style has been scattered and spastic from the start. When other indie-pop bands were trotting out rudimentary songs, Barnes was writing elaborate suites about parades full of imaginary characters and sentient bees. Since then, he's exploded in directions that somehow make sense of affinities for Prince, David Bowie, Sly Stone and countless weirdo psychedelic bands from the '60s and beyond.

"Bassem Sabry" opens the new album with a flare of electric guitar worthy of Black Sabbath before launching into... well, disco, of course. Swerves of that sort are to be expected from Of Montreal, but there's something increasingly rawer and edgier about Barnes' changes of mind. When he sings, "Every leader is a cellophane punk / If you hear me, say 'Yeah!,'" the only reasonable response is to sneak past the desire for that to make sense and scream along in solidarity instead. So many bursts of words race by in the first song alone — "cycloptic brooding," "sedition," "the mutinous tramp of cold voltage" — that it's best to relax into the realm of the evocative and let ideas fire as they trigger and fade.

So many ideas permeate Aureate Gloom, no song of which goes without at least a few surprising moves. "Empyrean Abattoir" starts off lithe and tightly coiled, with just a bass line and some suspicious drums, before jump-cutting into raw garage-rock aligned with The Creation on the soundtrack of a Wes Anderson film. The parts of "Monolithic Egress" that aren't floaty and light are dark and gnarled, with occasional deep-echo effects on the vocals to lend a sense of menace. Guitar lines in "Like Ashoka's Inferno Of Memory" invoke leads by Led Zeppelin, a heavier allusion than usual for Of Montreal, while other tracks tend toward Sonic Youth or even, in "Chthonian Dirge For Uruk The Other," thudding punk bands on the Amphetamine Reptile label.

In case you read past without pausing to take it in, it's worth taking another look at that last song title. Mull it over; let it settle. There is precisely one band that likes rock and funk and disco so much while also opening up the brain space where a title like "Chthonian Dirge For Uruk The Other" might make sense.