Accessibility links
Review: Moon Duo, 'Shadow Of The Sun' Visceral yet dreamy, the band's third album plumbs ever deeper into droning psychedelia. Moon Duo's influences are easy to spot, but the music feels like part of a continuum rather than a pastiche. 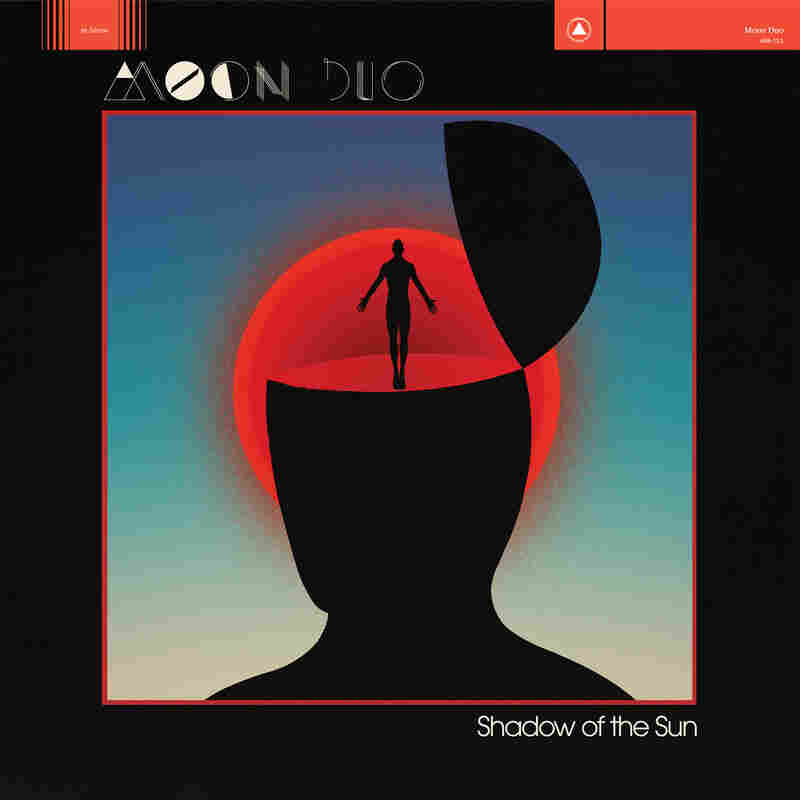 Shadow of the Sun Courtesy of the artist hide caption

Many traditionalist bands look to breathe life into old riffs, but Moon Duo seems to put more thought into it than most. The band's third album, Shadow Of The Sun, is another collection of cyclical songs based on the simple, repetitive riffs of singer-guitarist Ripley Johnson and singer-keyboardist Sanae Yamada (with the assistance of, alternatively, a drum machine or auxiliary drummer John Jeffrey). That approach has never been a drawback; Moon Duo's previous albums are visceral yet dreamy, and Shadow Of The Sun follows suit beautifully. What makes this the best Moon Duo record to date is the way Johnson and Yamada have plumbed ever deeper into their droning, elemental psychedelia.

This is druggy music, but there's nothing flowery about it. In "Wilding" and "Zero," propulsive beats and an eerie atmosphere are sweetened by sugary whispers. "In A Cloud" is more mesmerizing; Johnson and Yamada seem to want the title to be taken literally as their voices drift languorously across a spacious, aching soundscape. The kerosene-drenched hymns kick back in with "Thieves," a spiky, off-kilter shiver of chilled menace. But it's also the album's least compelling song: Moon Duo's music works best when it's hypnotic, and the stuttering tension of "Thieves" breaks the spell, while lacking the chant-like hooks that help make the rest of the record so alluring and fresh.

Still, there's a haunting familiarity to much of Shadow Of The Sun. Yamada's cascading, carnivalesque keys in "Night Beast" recall The Seeds, while the throbbing pulse of "Wilding" alludes to both Suicide and Spacemen 3. Neither track suffers from these obvious touchstones; in fact, the influences Moon Duo flaunts throughout Shadow Of The Sun make it feel like part of a continuum rather than a pastiche. Most thrillingly, "Slow Down Low" evokes the throbbing romanticism of early Jonathan Richman as filtered through Can's krautrock; even the song's name seems like a playful response to The Modern Lovers' "Roadrunner."

Granted, most of these inspirations jell perfectly with Moon Duo's mantra-rock methodology. The band shakes things up, however, in "Ice," a shimmering, cinematic oscillation of synths that pretends Giorgio Moroder produced The Stooges' self-titled album — and somehow makes that odd combination work. But the album's most startling moment comes when "Animal" rears its head. A feral, fuzzed-out anthem crawling with ghosts and cobwebs, it hearkens back to the '80s death-punk of 45 Grave. Moon Duo wears its pedigree proudly on its sleeve, but thankfully, Shadow Of The Sun doesn't coast on the past. Instead, it reinvents it for a hectic future where the best form of meditation might just be the drone of a blissful riff.