Accessibility links
Catching A Southern Coyote, Then Letting It Go In The Name Of Science Coyotes in the Deep South live among a mosaic of agricultural fields and woods but little wilderness. A new study uses tracking collars to understand how these animals thrive in three Southern states. 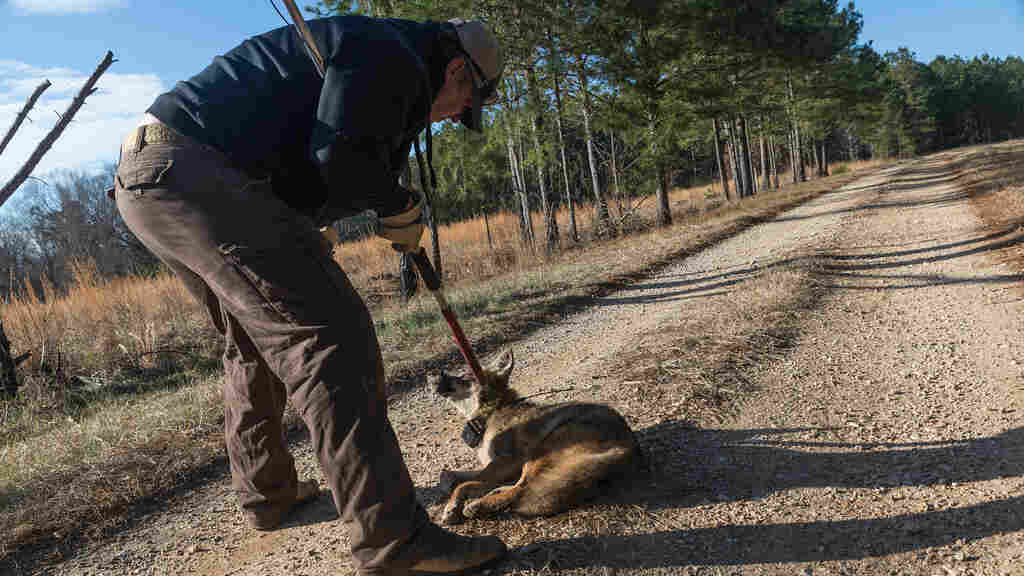 Professional trapper Dan Eaton starts to release a coyote after it was fitted with a GPS collar. University of Georgia biologists will track the animal for two years as part of a study of Southern coyotes. Grant Blankenship/Georgia Public Broadcasting hide caption 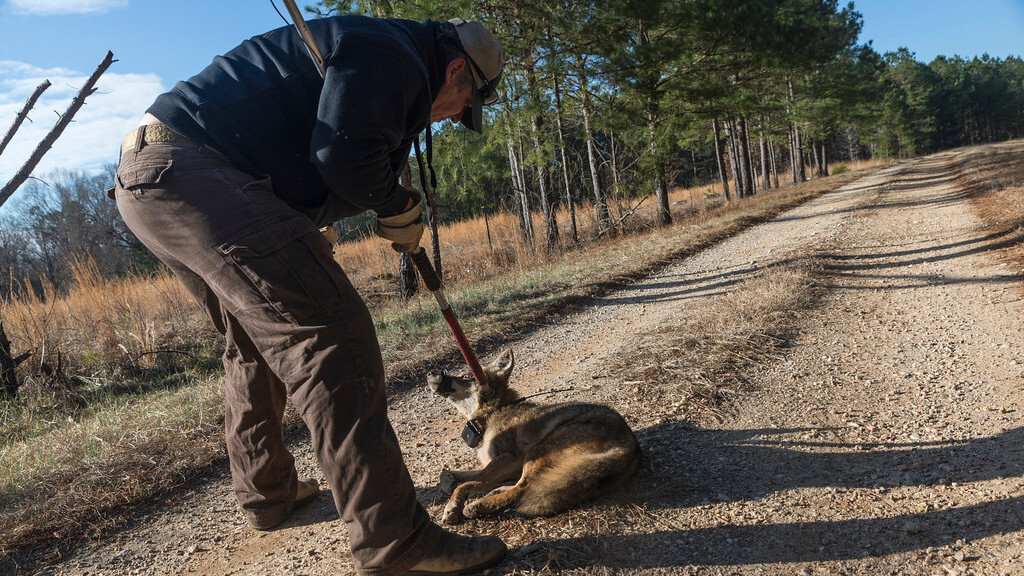 Professional trapper Dan Eaton starts to release a coyote after it was fitted with a GPS collar. University of Georgia biologists will track the animal for two years as part of a study of Southern coyotes.

The hunt for coyotes starts in Dan Eaton's truck.

Eaton is a professional trapper. He's been doing it for a long time — since he was 10 years old — so he's nonchalant about the dead beaver in the truck bed that he sometimes uses to attract coyotes.

On a recent day, Eaton heads to a trap line set on private hunting land outside Augusta, Ga.

"Everybody wants you to trap coyotes for free until you tell them you're collaring them and letting them go," Eaton says.

He's been releasing coyotes lately to include them in a new University of Georgia study aimed at understanding how coyotes live in Georgia, South Carolina and Alabama. Biologists want to know how coyotes are thriving in the South and how they are different from those in the West and North.

Many landowners want people to be the only deer hunters around. They want coyotes gone, so they don't have to compete with them.

"I told them after the study I'll come back, and if they're still on their property, I'll catch those coyotes and take care of them," Eaton says.

The first couple of traps are a bust, but after driving through a muddy hole, Eaton finds a success.

The coyote works silently to free herself. The trap holds but doesn't crush her foot.

Eaton readies his choke stick, which looks like what dog catchers would use. Then he calls to the animal.

"Come here buddy," he says, zipping up the coyote's neck with the choke stick.

Then he takes the animal back up the road to meet the biologists. They take blood samples, weigh and measure the coyote and fit her with a tracking collar. 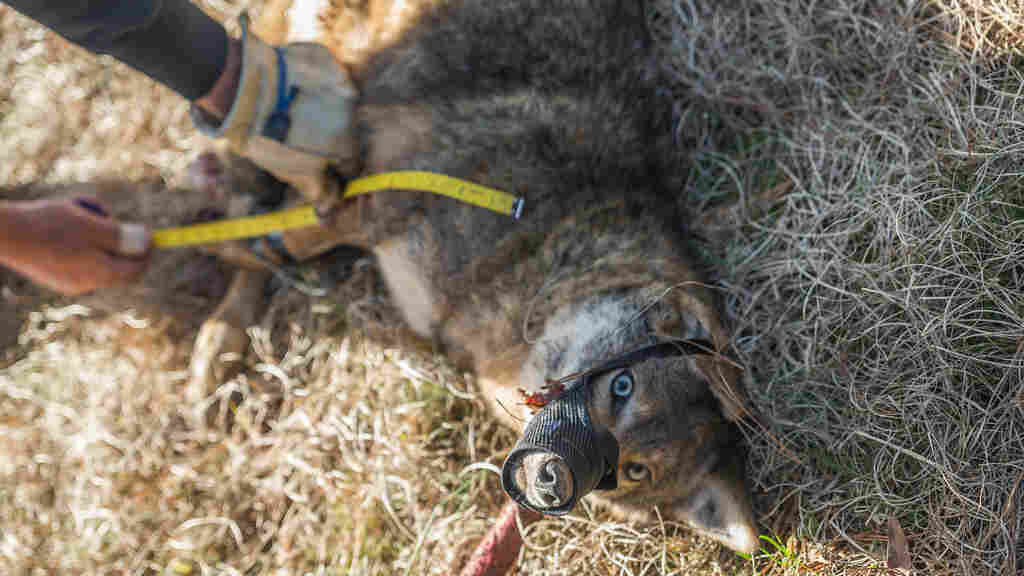 A coyote trapped outside Augusta, Ga., is measured before being fitted with a GPS collar and released to be tracked for two years. Grant Blankenship/Georgia Public Broadcasting hide caption 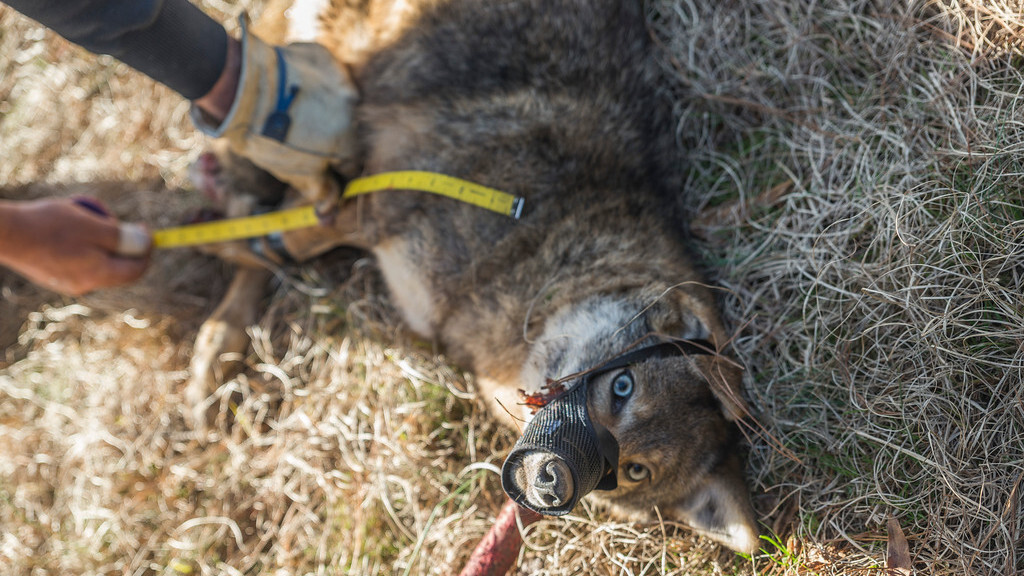 A coyote trapped outside Augusta, Ga., is measured before being fitted with a GPS collar and released to be tracked for two years.

"That's actually the collar transmitting to the receiver here, and that beep sequence just notifies us that the collar has initialized and is functioning properly," says Will Gulsby, one of the biologists leading the study.

Through all of this work, the coyote lies motionless and silent except for her labored breathing.

"They understand that they've been beaten," says biologist Michael Chamberlain, who is also leading the study. "So they've kind of lost the battle."

This coyote is one of about 160 that researchers want for the study. The study will be a bit smaller than a similar one taking place in Chicago.

"The idea with this study is to expand it to a much broader landscape," Chamberlain says.

Every coyote in the study will have a GPS collar. Biologists hope to learn how the animals navigate this broader landscape of agricultural fields and woods, but little wilderness. They also hope to discover how coyotes hunt, whether alone like they do out West or in groups like wolves.

The trapper and the biologist find the coyote they just caught to be about average. She's an adult female and weighs about 30 pounds.

After a few last checks of the GPS collar, Eaton carries the coyote up the road for release. She's calm at first, but finally fights back when her feet hit the ground.

Eaton unzips the choke stick, and she leaps into the air, sprinting back into the woods.

But she stops about 30 yards past the tree line.

"I've watched them many times," Chamberlain says. "They'll stop and stare back at you, and then they'll go about their way."

And sure enough, she looks back from the woods and then she's off. If all goes well, researchers will track her for the next two years with that GPS collar.