Accessibility links
Little-Known Laws Help Sex Trafficking Victims Clear Criminal Records "I'm not ever going to forget what I've done," says a woman once convicted of prostitution. "But, at the same time, I don't want it thrown in my face every time I'm trying to seek employment." 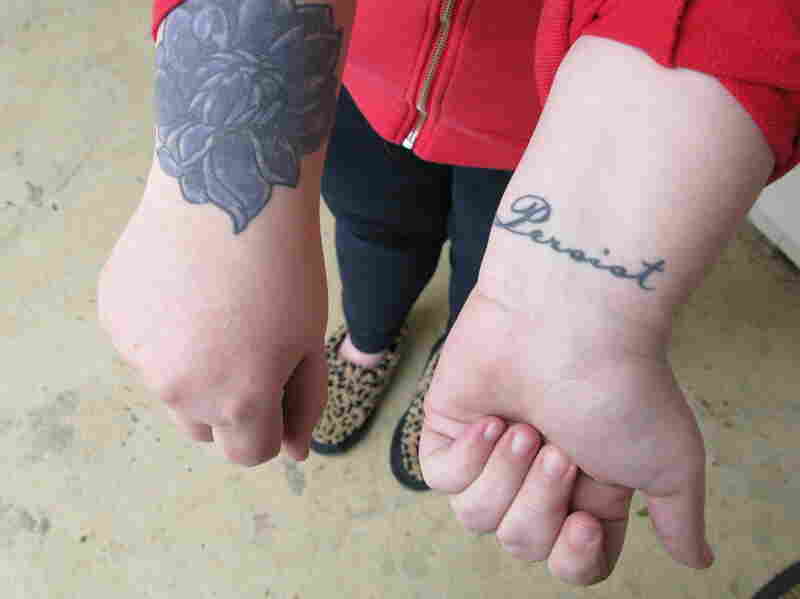 This woman, who has had her prostitution charge wiped away, says she got the lotus tattoo to cover up the brand of a former pimp. "Once they put their name on me, I was their property," she adds. She says she got the word "persist" tattooed as a reminder to keep moving forward. Evie Stone/NPR hide caption 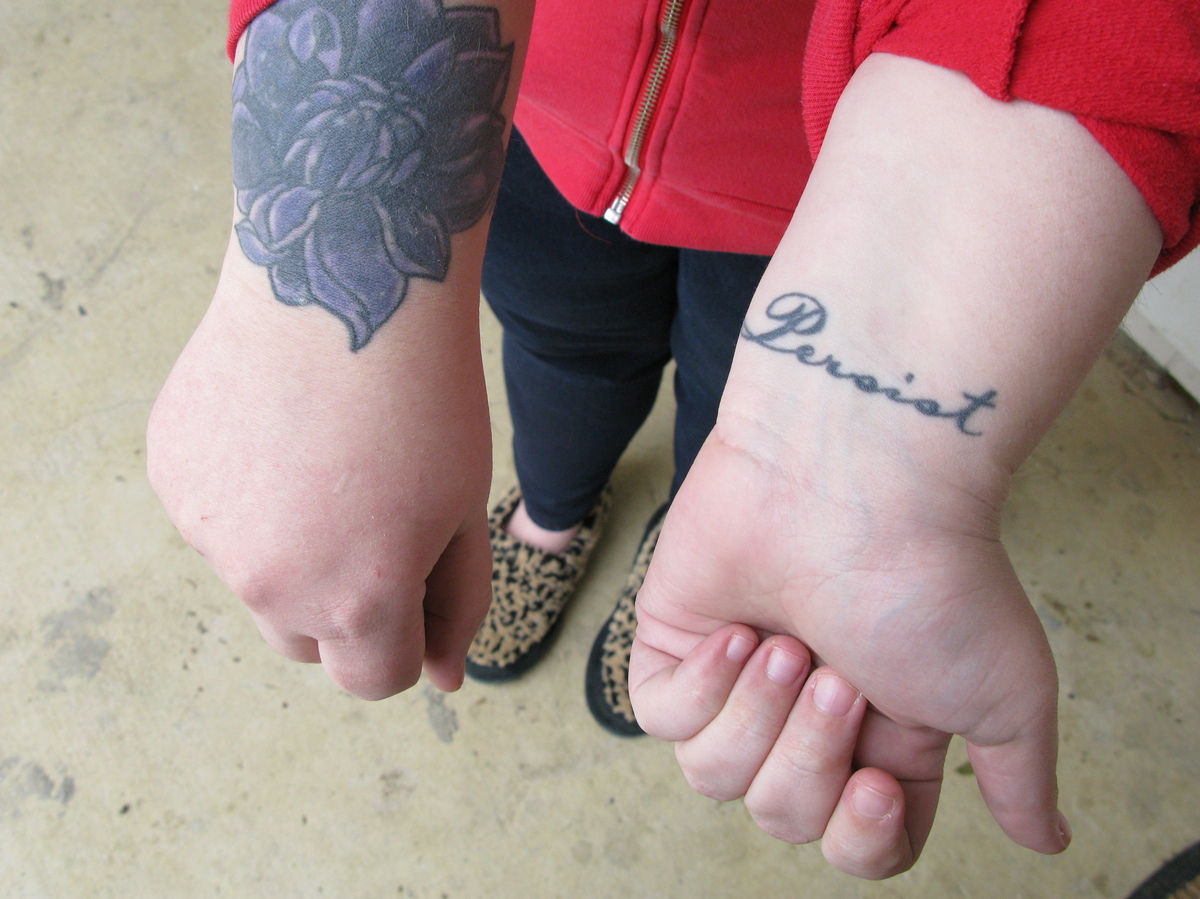 This woman, who has had her prostitution charge wiped away, says she got the lotus tattoo to cover up the brand of a former pimp. "Once they put their name on me, I was their property," she adds. She says she got the word "persist" tattooed as a reminder to keep moving forward.

Advocates for women arrested on prostitution charges want the justice system to adopt a different approach. They say instead of being locked up, many prostitutes should actually be considered victims of human trafficking. And they're starting to offer those women a way to clean up the criminal records left behind.

One of them lives in an apartment not far from Dallas. Inside, a 24-year-old woman pushes up her sleeve to show off a tattoo of a lotus flower. The deep purple ink covers up an older mark.

"If you look closely, you can still see the diamonds," says the woman, whom NPR is not identifying. "So it said M and a P because that's what his name was, and it had a chain of diamonds around it."

M.P. was her pimp. That earlier tattoo: a brand, to show the world she belonged to him. She has another mark on her back, from a different pimp.

"Once they put their name on me, I was their property," she adds.

The woman says she spent her teenage years forced into prostitution. It was brutal.

"My skull has been cracked, all of my ribs, front, have been broken. Black eyes, you know, regular getting beat up," she says.

Those injuries have healed. But she was a convicted prostitute. And that criminal record was harder to get rid of.

Recently, with the help of volunteer lawyers and a little-known law, the woman with the flower tattoo convinced a Maryland judge to help, to wipe away her conviction on prostitution charges.

It's a process known as vacatur. And it's now an option in 20 states for people who can persuade a judge that someone forced or coerced them into selling their bodies.

Jessica Emerson is a lawyer who helped the 24-year-old clear her record.

"This is justice," Emerson says. "It's finally giving these individuals their lives back."

Emerson is leading the way in Maryland, where the vacatur law has been on the books for years but, she says, used just twice.

"If you are not addressing their criminal record, you are sending them back out into the world with a bull's-eye on their back," Emerson says. "Because the second they go and try to get a job, the second they try to apply for safe housing, they're going to have a roadblock."

And the pimps use that to their advantage, says Bradley Myles. He leads the Polaris Project, a nonprofit that fights human trafficking.

"Traffickers use the criminalization of a victim as another way to gain power over that victim and remind them of the hopelessness of their road back," Myles says.

Back in Texas, the young woman with the lotus tattoo explains how it all began. She says she was raped by a stranger when she was just 11 years old. For the next two years, she acted out — running away and fighting with her parents. Then one day, she was walking to a friend's house, and a man in a Mercedes waved her over to his car.

"If you are not addressing their criminal record, you are sending them back out into the world with a bull's-eye on their back."

"He took me to get my nails done, he took me shopping, I got my hair done and we partied," she recalls. "And he gave me a pill which was Ecstasy. And then he started giving me more pills, then forcing the pills on me, and told me that I wasn't going to be going home."

Eventually, the girl and her pimp were arrested. But police told her mom she might never get back on track.

"I just kept running away and every time I ran away I'd end up in another pimp's arms," the woman with the tattoo says.

Then, four years ago, a police detective arrived at her hotel room near Baltimore, Md., part of a sting operation targeting pimps and prostitutes working near the airport. It wasn't her first arrest. But it was, she says, the first time a police officer treated her like a person.

"He told me that he saw something in my eyes and started asking me about my life," she says, "and I started telling him."

That man is Detective Dan Dickey in Anne Arundel County, Md. He's a member of a federal task force that finds and prosecutes sex trafficking.

"We actually came across this case by just doing surveillance on a local hotel," Dickey says.

After the arrest, he recalls, "I went and visited her, had a conversation with her and then actually called [a person at] one of our nonprofits that we work with and told her, 'This girl's in jail; she's willing to hear what you have to say.' "

Someone from that local group talked with the young woman. They gave her a place to stay after she got out of jail and connected her with the help she needed to get away from her pimp for good.

Eventually she moved back to Texas, to be near her family. She had a baby boy last year. Now she's trying to get back into school.

"I want to provide my son with a good life," she says. "It might not be the most extravagant. I don't want to be rich. I just want to live a better life than I have lived."

Taking prostitution charges off her permanent record was a big step in that direction.