Accessibility links
Even Pickaxes Couldn't Stop The Nation's First Oil Pipeline The debate over Keystone XL is nothing compared to the battle over the nation's first commercial oil pipeline. It transformed how energy was transported forever — but not without sabotage and threats. 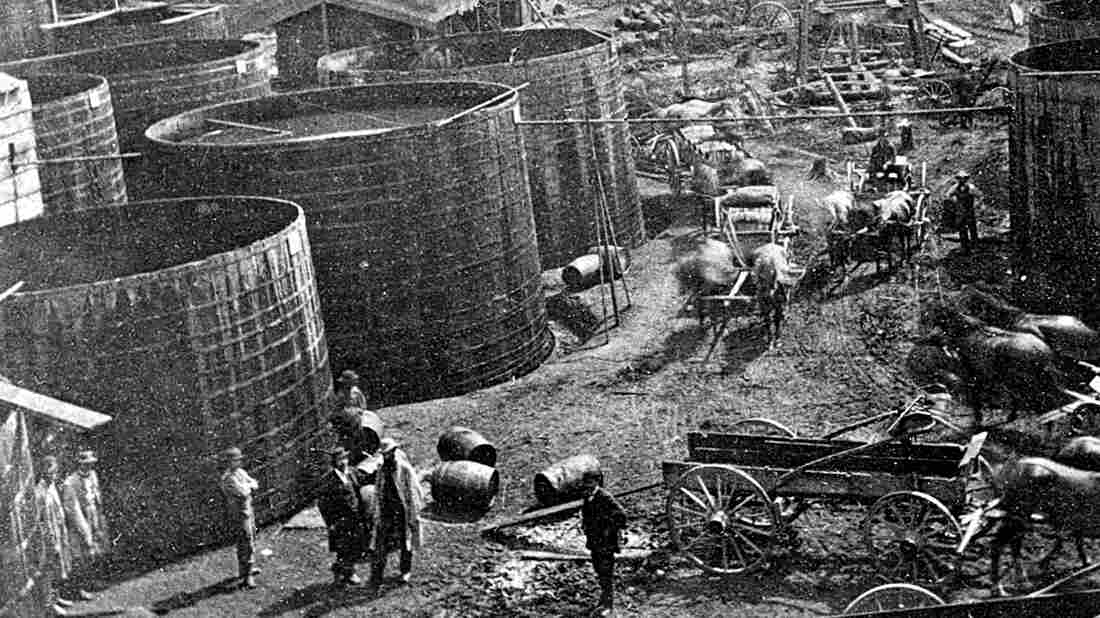 Tanks holding oil in Pithole, Pa., in 1868. Samuel Van Syckel built his first pipeline over just five weeks in 1865. At 2 inches in diameter, it was tiny by modern standards — but it was an engineering marvel. Drake Well Museum/Courtesy of PHMC hide caption 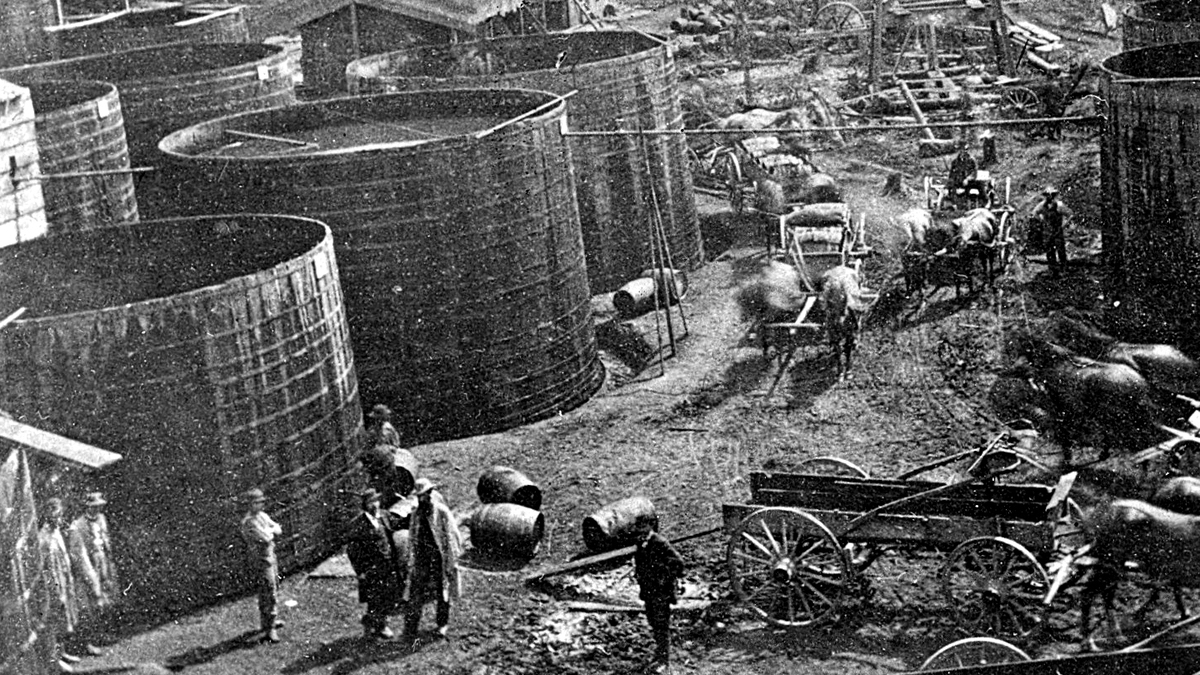 Tanks holding oil in Pithole, Pa., in 1868. Samuel Van Syckel built his first pipeline over just five weeks in 1865. At 2 inches in diameter, it was tiny by modern standards — but it was an engineering marvel.

His pipeline transformed how oil is transported — and it would change the modern world, too — but not before a battle that makes the debate over the Keystone XL pipeline look meek by comparison.

In January 1865, the place where this all happened, called Pithole, was nowhere, really — just a patch of wilderness in the foothills of the Appalachian Mountains. Then drillers struck gushers at three wells and everything changed.

By September, an estimated 15,000 people moved to Pithole. And soon, Van Syckel had constructed his 5 1/2-mile pipeline.

A Place Called Pithole, And An Opportunity

Walking the snowy grounds of what used to be Pithole City, Sue Beates, curator of the nearby Drake Well Museum, points out the sites where old Methodist and Presbyterian churches once stood.

But there was more to Pithole than religious devotion, she explains. "There were hotels, a jewelry store, drug stores, houses of ill repute, lots of saloons, parlor dens of all sorts, billiard parlor dens — that sort of thing." 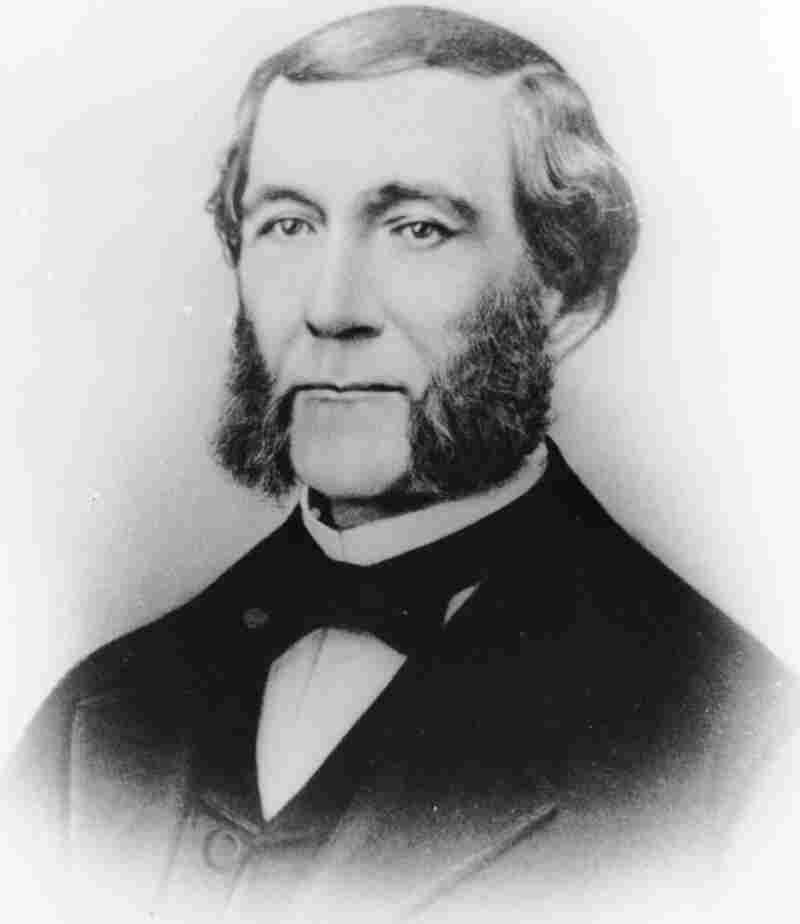 Before Van Syckel's pipeline, transporting oil cost as much as, or more than, the oil itself. He eventually lost his pipeline to the bank after making several unwise bets. Drake Well Museum/Courtesy of PHMC hide caption

Van Syckel had come to the region as an oil buyer, a middleman. Like everyone else, he was there to make his fortune. But there was a big obstacle to the Pithole boom.

"Once people were there, they discovered it was one thing to bring oil out of the ground — but it was an entirely different thing to try and get it to market," says Christopher Jones, a historian at Arizona State University.

"The main way oil was transported during the first several years of the industry was by teamsters," he says. But this was long before the labor union by the same name.

"These were men driving wagons pulled by horses, and they would collect the oil in large barrels — 300-pound barrels of oil — that they would load up on their wagons, and drag them over the various roads," Jones says.

Roads filled with up to two feet of mud, Beates notes. The work was incredibly tough, but the teamsters made it pay.

"They definitely had a monopoly on it," Beates says. "Oil was selling for maybe $5 a barrel, [$3] of which went to the teamsters."

So the cost of moving the oil was as much as, or more than, the oil itself. Van Syckel saw an opportunity.

"He had a mechanical aptitude and a vision for doing things that exceeded most of the other people who went there," Jones says.

Or to be more exact, the first oil pipeline that "didn't leak like a sieve," Beates adds.

Van Syckel's pipeline was wrought iron and 2 inches in diameter. That's tiny by today's standards, but it was an engineering marvel. One challenge, Jones says, was preventing ruptures.

"Making sure that the joints were securely enough welded that, even with the pressure to push the oil through the pipelines, that that pressure didn't split the pipes apart and ruin the pipeline," he says.

The topography along the route was also a challenge, Beates says.

"You can see the steep hills that it had to go over, which is why there were steam pumps to help push the oil up over the hills," she says. "Then it could gravity feed down the next [hill] and then steam-pump-pushed back up the next hill all the way to Miller Farm, to the railroad." 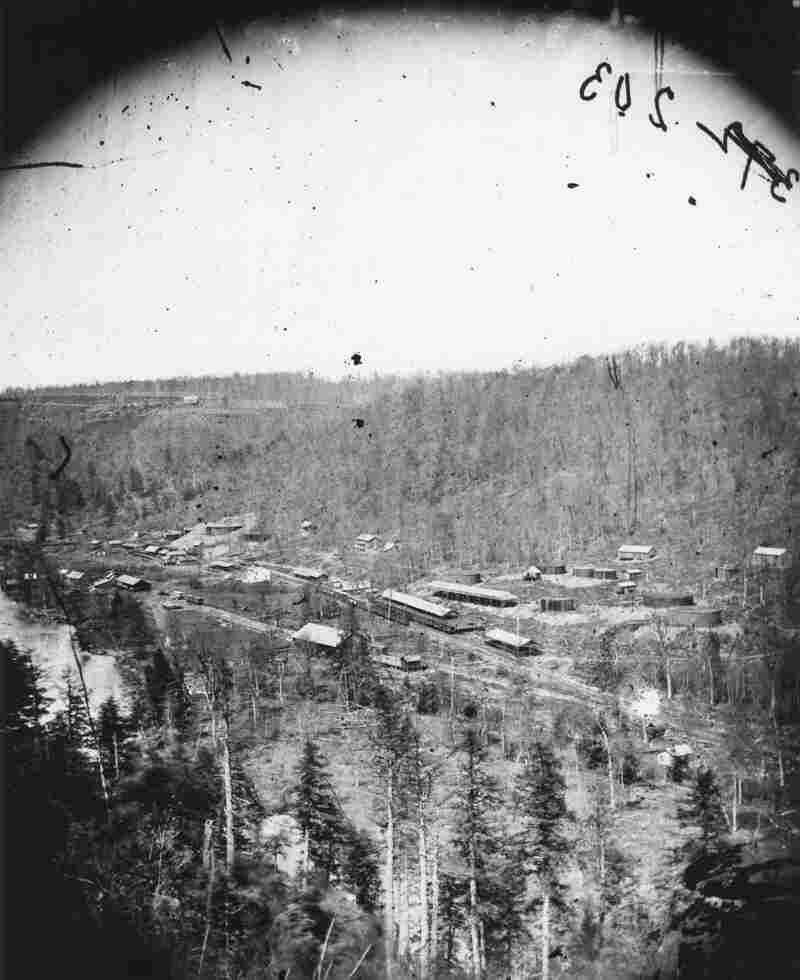 Miller Farm, the terminus of Van Syckel's pipeline, in 1868. The oil was pumped to Miller Farm and then transported by railroad. Drake Well Museum/Courtesy of PHMC hide caption 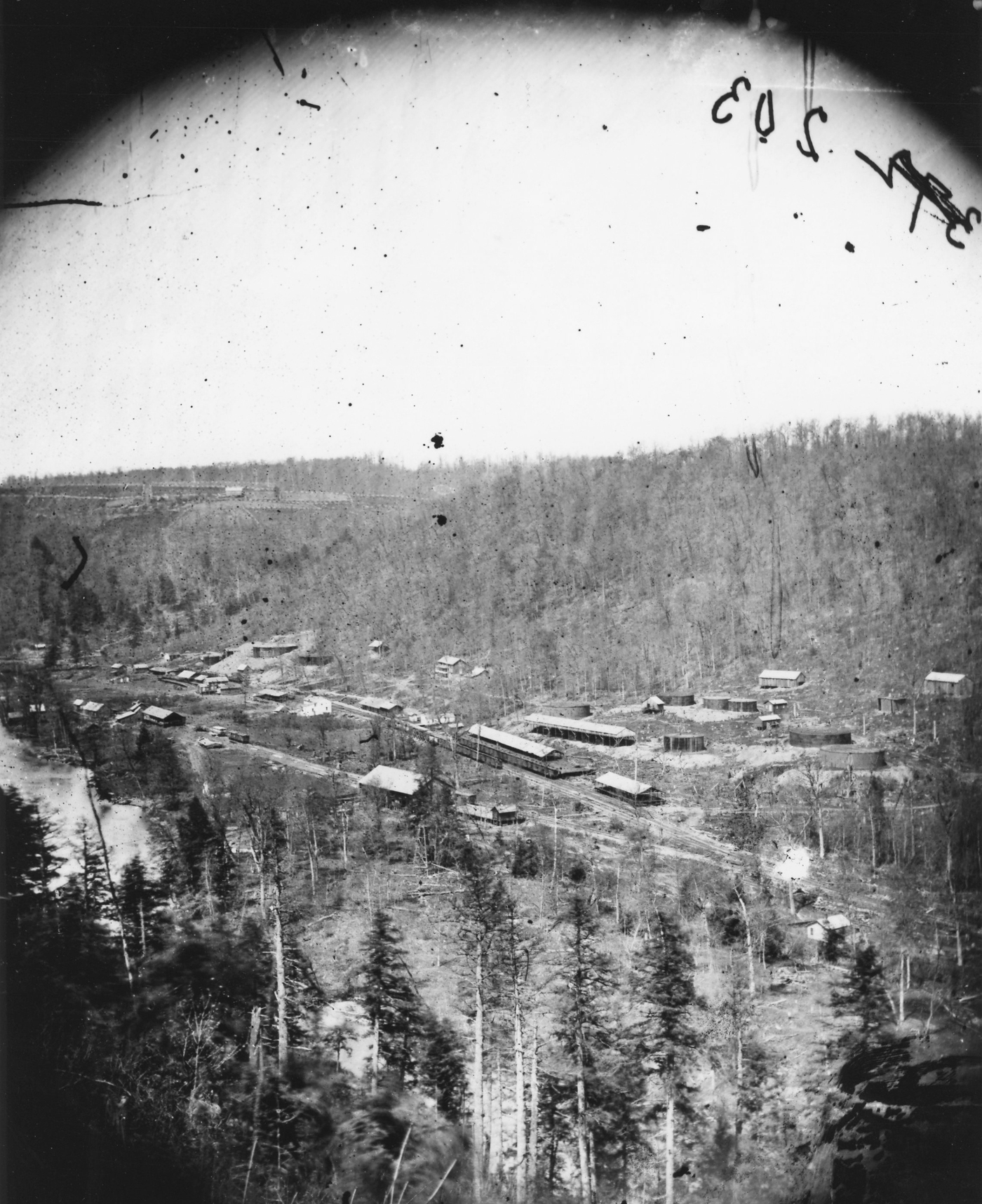 Miller Farm, the terminus of Van Syckel's pipeline, in 1868. The oil was pumped to Miller Farm and then transported by railroad.

The engineering worked fine. But the teamsters — those rugged guys who hauled wooden barrels of oil with teams of horses — weren't too happy with Van Syckel's pipeline.

"So as soon as the pipeline was completed, several of the teamsters in the middle of the night went to various sections of the 5-mile pipeline and ripped it out of the ground and pulled the pipe apart so it stopped working," Jones says.

Beates adds, "They took pickaxes and horses and chains and pulled the pipe apart."

There were threats and fistfights, but Van Syckel rebuilt his pipeline. And this time, he enlisted the sheriff and his own security team.

"By hiring his own armed force to patrol the line, he ended up defeating the teamsters — and they stopped trying to sabotage his line," Jones explains.

And just like that, a new technology would make an entire line of work obsolete.

"It's estimated that 500 teamsters were put out of business in five weeks," Beates says.

Within a couple of years, she says, hundreds of pipelines crisscrossed western Pennsylvania, the birthplace of the American oil industry. "Wherever there was a big oil strike, there would be a pipeline to transport the oil to a railroad," Beates says.

And what about Van Syckel? After making some unwise bets, Jones says, he lost his pipeline to the bank. Later, the ingenious Van Syckel developed some new methods of refining oil.

But within a decade, someone else would emerge to dominate refining, pipelines, rail shipments — almost the entire oil industry. His name was John D. Rockefeller.