Accessibility links
Not Just Eating Bugs For Money! A Story Of 'Survivor' And Strategy What's the actual appeal of Survivor for people who have been watching it for almost 15 years, through what will soon be 30 seasons? Believe it or not: strategy.

Not Just Eating Bugs For Money! A Story Of 'Survivor' And Strategy

Not Just Eating Bugs For Money! A Story Of 'Survivor' And Strategy 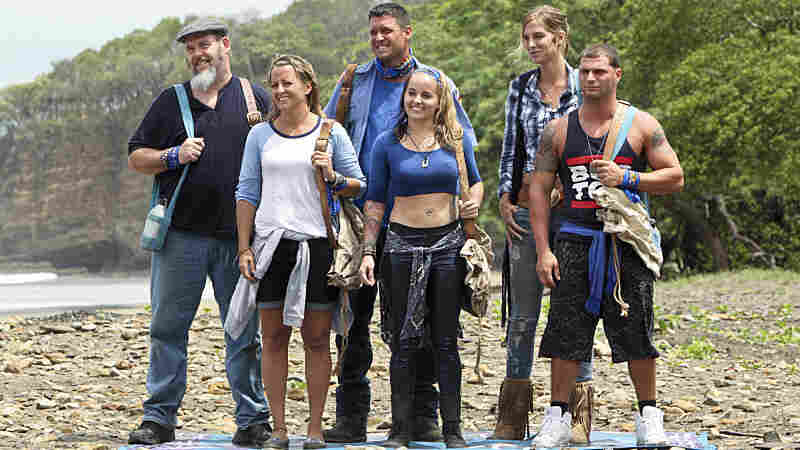 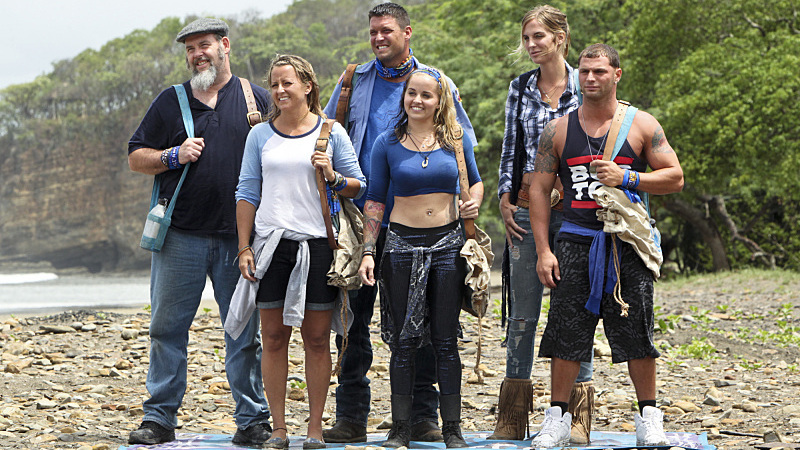 The "Blue Collar" tribe assembles on the premiere of Survivor, season ... 30.

The most famous scene in the first season of Survivor, back in the summer of 2000, involved the castaways, who were very hungry indeed, catching and cooking a rat, then tentatively picking meat off the bones. There was also a challenge that involved eating grubs as quickly as possible. This pretty much sealed the fate of the show's reputation early on among people who didn't watch it: it was essentially one big show called Eating Bugs For Money, and its pleasures were purely exploitative, so low of brow that nothing was visible except the bottom of the barrel.

This was a distortion, of course, as are most reputations held by non-viewers of most television shows — and most notions of anything held primarily by people who lack firsthand knowledge.

Wednesday night, in honor of the thirtieth — THIRTIETH! — season of Survivor, which kicks off with a 90-minute premiere, let me tell you about my favorite tribal council in Survivor history, plunked in almost the precise middle of the show's run, in the mostly unheralded fourteenth season, set in Fiji. (They call it Survivor: Fiji, I call it Survivor: Nice People vs. Jerks.)

The setup was this: There were nine people left, roughly divided into two four-person teams with one person in the middle. On one side (we'll call them Team Earl) were Earl, Cassandra, Boo and Yau-Man. These were the ones I liked. On the other side (Team Alex) were Alex, Edgardo, Mookie and Dreamz — who were all arrogant young dudes who called themselves "The Four Horsemen" (apparently not knowing this made one of them "Pestilence"). The floater was Stacy, a person nobody really entirely liked, but everybody obviously wanted to win over to their side, because if they did, they'd have a 5-4 advantage and could knock off the other team one person at a time.

The wrinkle: this was after the show had introduced "hidden immunity idols," which were little necklaces hidden around camp that had to be found using a series of clues. If you found one, you could keep it a secret, or you could tell other people (but nobody could steal the idol from you if they found it in your stuff, and it seems like you had to hand it over before tribal council if you wanted somebody else to use it, though I'm not sure whether that's the case). If you had an immunity idol, you could play it at tribal council to save yourself after everybody voted, but before the votes were announced. Meaning that (1) people had to vote not knowing who might be holding onto one, and (2) you had to play it not knowing whether you needed to — not knowing whether anyone voted for you. Any votes for someone who had played an idol would be thrown out, and whoever got the next most votes would be voted off.

Still with me? Starting to see how there might actually be strategy involved here?

Okay. So. At this point, each team had in its possession one idol to use, which they could hand to whomever they wanted, based on who might need it. In theory, see, if you could guess which of your members the other team was voting for, you could give that person the idol and have them play it, and then all the other team's votes would get neutralized and you would zap them instead — and this would work even if they had a 5-4 advantage, because if you can get all their five votes not to count, as long as your four votes — or three votes, or even two votes — still count, you decide who gets booted out of the game.

Team Earl successfully recruited Stacy, so they had the 5-4 advantage. HOWEVER, this was also the first time Dreamz (this is what he called himself; I don't write this stuff) found out for the first time that his team, Team Alex, had an idol kicking around, which Mookie had at the time, and he wondered why they hadn't told him before. (In other words: "That's great news! Buuuuuut, the fact that you didn't tell me earlier makes me think we're not really friends.")

So Dreamz, whose allegiances were always constructed from the sturdiest mounds of mashed potatoes, decided to defect to Team Earl also, and he brought along the bonus of telling them that Mookie had the idol. Therefore, they should not vote for Mookie, they should vote for Alex, they decided. BUT THEN, Alex decided that he felt like they might vote for him, so he got Mookie to give him the idol. Dreamz — whose was now basically a spy for Team Earl — came back and told them that he saw Mookie slip the idol to Alex, so now they should not vote for Alex, they should vote for Mookie.

Here was Team Earl's dilemma: either Dreamz was telling them the truth, in which case they should vote for Mookie, or Dreamz was lying and spying for Team Alex to fool them into voting wrong — see? — and Mookie did still have it, and they needed to vote for Alex. Mookie or Alex? Mookie or Alex?

Stacy — the member of the team nobody had originally particularly wanted — found the simple, elegant solution: vote off Edgardo. She successfully identified this as not a real dilemma, because the two choices they were considering weren't the only choices. Vote for Edgardo, and for heaven's sake don't tell Dreamz, because if he is a spy, he'll just go back and tell them and they'll give the thing to Edgardo.

So as we went to tribal council, Team Alex (not including Dreamz) was going to vote for Cassandra, believing they'd have four votes for her (Mookie, Edgardo, Alex and Dreamz), which would trump the five votes for Alex (Boo, Stacy, Earl, Yau-Man and Cassandra) once Alex plunked down the idol he got from Mookie. Five members of Team Earl (Boo, Stacy, Earl, Yau-Man and Cassandra) knew they were voting for Edgardo.

And poor old Dreamz, who made all this possible, believed he was part of a six-vote majority going for Mookie.

The votes were cast! Jeff Probst asked if anyone wanted to play an idol! Alex got up and handed over his idol, making him immune from the vote! And the best part: ABSOLUTELY EVERYONE believed that at this moment, everything was going according to plan. There is not a single face at this tribal council that does not look smug when Alex plays his idol. Alex himself, an arrogant attorney who would later give one of the most embarrassingly indignant speeches ever about having been voted off, looks like he's about to close his eyes and reveal that one eyelid says "BOO" and the other one says "YAH."

Here's Alex, shooting a look at the other team like, "Sorry, bro, YOU CAN'T GET ME!" 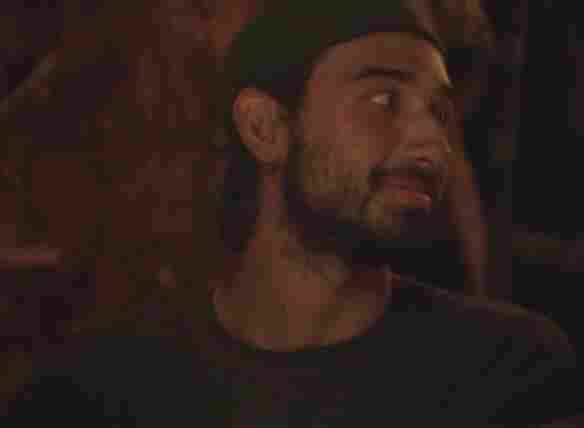 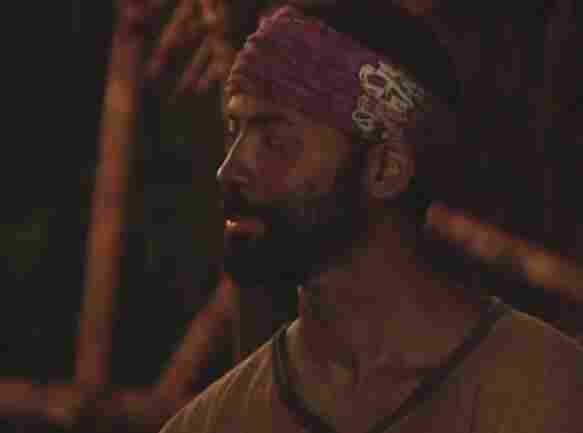 So Probst starts by reading the Cassandra votes. One, two, three, four. Everybody still looks happy. Then he reads Dreamz' vote for Mookie, and Dreamz looks happy.

And then he reads the first vote for Edgardo, and the greatest sequence of facial expressions maybe in the history of television ensues. Edgardo's face deflates. Alex's face deflates. Earl grins and nods. GAAAAAAH IT'S STILL SO GOOD.

There's a reason I told you this long, involved, exclamation-filled story. This is a story of watching a couple of people who aren't very likable lose a million dollars, fair and square, because they got outfoxed. Don't get me wrong — I wouldn't ever wish any actual harm on any of these people; it's just television. But much like it's fun to watch a fantastically great athlete and person beat an athlete who seems like a jerk in a contest that's just a contest and doesn't actually hurt anybody, it's really fun when unappealing contestants lose through their own folly, and the more full of themselves they are in the run-up to their vanquishing, the more they talk about how much they're controlling everything, the better it feels.

Yes, you have your "it's all fake!" people, and of course, these things are edited and storylines are created. But I've met a certain number of people who have been on these shows, and never have I thought, "Wow, my feelings were the result of careful editing, because this person is not the way they appeared on television at all." Nor have I ever had one say, "You know this other person who was on the show with me? Really not the way they appeared at all; that was manufactured by the show." People are more complicated than they seem, sure, but that applies in any setting — people you know only at work are more complicated if you see their home lives. All perspectives on other people are limited and lacking in nuance when they occur at a distance, whether it's on television, on the internet, or in person.

And people do watch for the fights and the bug-eating; that happens. But me, I watch for this actual gameplay, where folks actually try to figure out how to win a game with a lot of moving parts. And much as I wish they'd stop tinkering with the format, I will be back, for the ... thirtieth time.