Accessibility links
Book Review: 'The Turnip Princess' By Franz Xaver von Schönwerth, Translated By Maria Tatar Once upon a time, a historian went hunting for fairy tales. He found hundreds, but his collection was long thought lost. But now they've been found, and several are reprinted in The Turnip Princess.

It's All Charm and Wolves In 'The Turnip Princess'

It's All Charm and Wolves In 'The Turnip Princess' 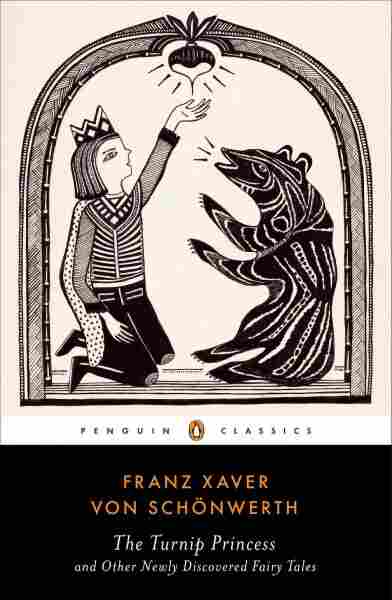 The Turnip Princess and Other Newly Discovered Fairy Tales

Long ago in far Bavaria, Franz Xaver von Schönwerth went hunting for fairy tales. However, the collection disappeared, and his work was thought lost forever. Then in 2009, cultural curator Erika Eichenseer discovered five hundred of them in what one assumes must have been the deepest, darkest, most perilous basement of a municipal archive, and all those stories came to life again.

Folk tales are a shared genealogy. To read them is to recognize where one story descends from another, to learn the preoccupations of the storytellers and their communities, to make note of universal tales whose concerns are eternal, and to see where trade across borders has shared as many ideas as miles of road. They are a map of what we hold dearest and pass down, and to discover new tales is to piece together long-lost family.

This glimpse of Schönwerth's body of work provides a uniquely Bavarian oral tradition that can take its place in the wider canon, cheek by jowl with spiritual (and geographic) cousins the Brothers Grimm. In the hands of renowned folklorist and scholar Maria Tatar, these seventy-two stories come to life with a snappy matter-of-factness, racing with palpable energy through fantasy landscapes that always feel close to home.

Reading through these stories means stumbling into familiar faces: clever tailors and evil mothers-in-law, vain but goodhearted young men, virtuous girls who do as they're bid. Many of the stories are short enough that themes begin to emerge beyond just the story types Tatar has sorted: Evil is almost mundanely ubiquitous, an unavoidable presence that walks hand-in-hand with all the marvelous coincidences within these stories. If a set of talking swans insist you let a giant breathe fire on you and then kiss twelve tortoises, there's no point asking why; if your friends leave you at the bottom of a well, might as well wander around until you find a magical garden. The land of stories is crawling with princes; it's crawling with evil, too. Not much point questioning either.

Fairy-Tale Adaptations: It's Ever After, All Right

Some of the stories in The Turnip Princess emerge from that shared, foggy history of pagan lore and local superstitions: third children and magical objects abound, there are several wise and helpful birds, and if you meet an old beggar on the street, you'll give them whatever they ask for if you know what's good for you.

Some tales come from more immediate concerns than tales of the supernatural or even of heroism, and tend to be charmingly pointed: "The Little Flax Flower" tells of a pretty girl who paid no attention to her farming, and a plain girl who worked hard and spun beautiful cloth, and — wouldn't you know it — when the prince rides up (there are always princes, even in the fields), he wastes no time claiming that industrious girl for his own.

Still, reassembling enough story elements will eventually garner you a few new monsters, and there are a few stories here that stand out starkly in their unexpectedness and their rough-edged sting. In "The Wolves," a princess berated by her husband for childlessness declares only adulterers have more than one child at a time — and then gives birth to seven boys in seven days. As this is a fairy tale, she sends them all into the woods to die. They come home again, of course, but the story's a reminder that even the casual ruthlessness of fairy tales still has the power to impress.

Tatar provides commentary on each tale in the book's appendix — an act of politeness as much as continuity, preserving the intrusion of the modern perspective for after the spell's worn off. It includes both scholarly information and more anecdotal discussion, an enjoyable breakdown of story mechanics and a guide to that folktale family tree that traces both the pragmatism and the magic of the old tales, from the first talking bird to the last "And if they have not died, they are living happily today."