Accessibility links
Not My Job: Drummer Marky Ramone Gets Quizzed On Marky Mark Marky Ramone, who has just written a memoir called Punk Rock Blitzkrieg, will see if he can correctly answer three questions about Marky Mark and the Funky Bunch. 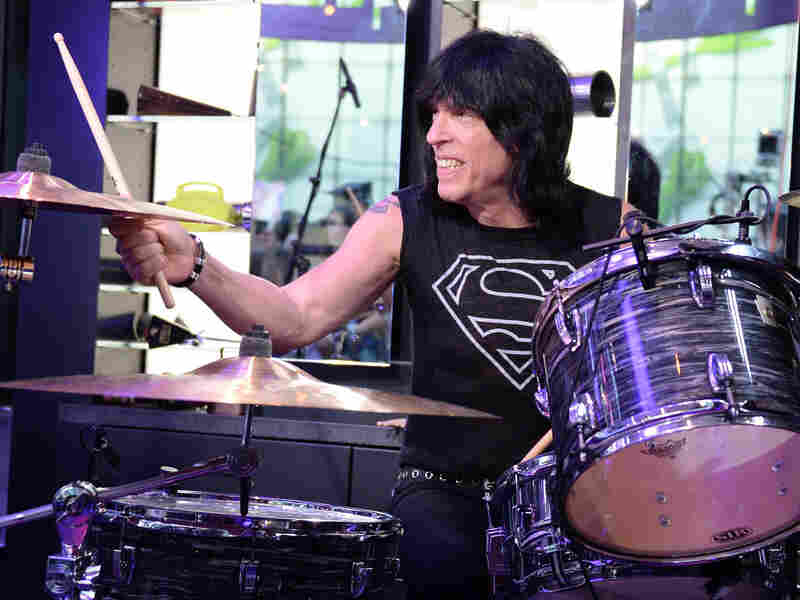 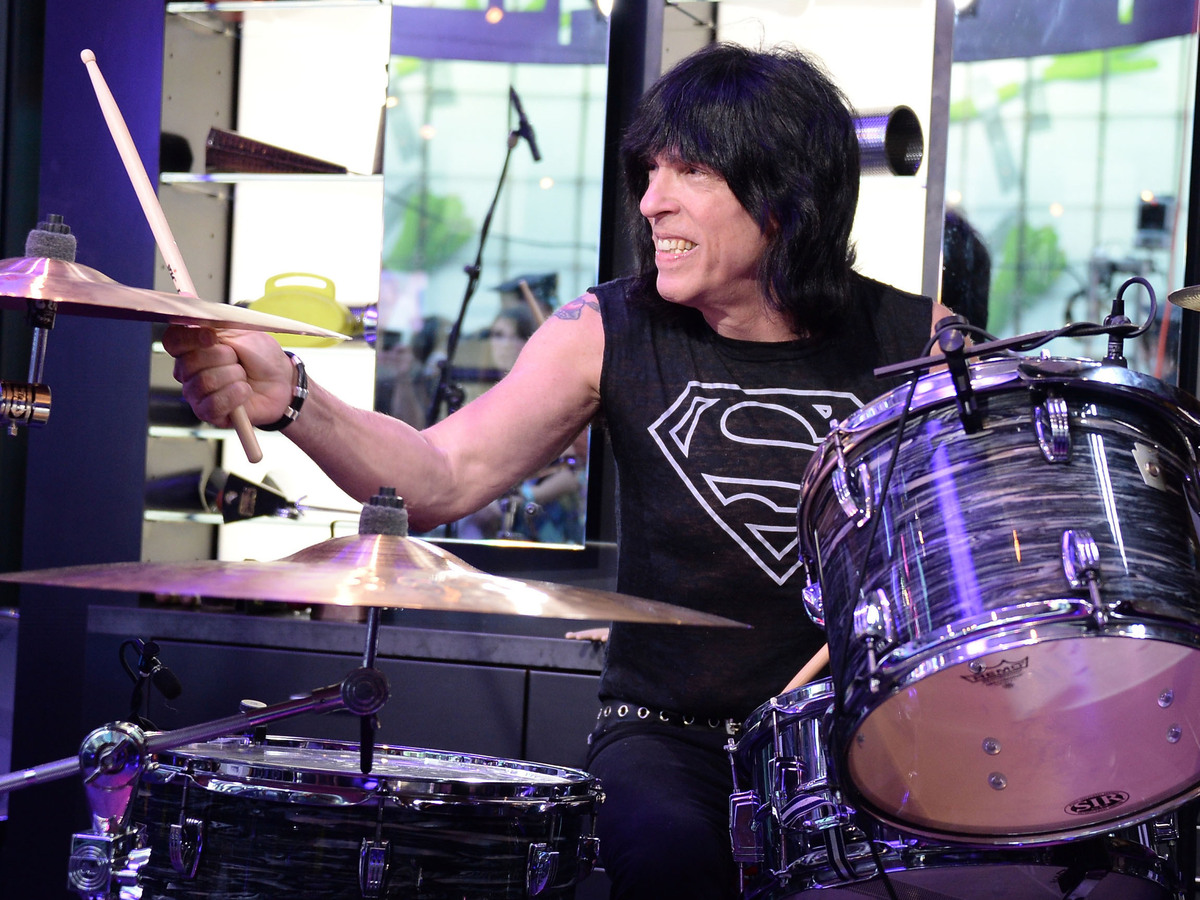 Forty years ago, Mark Bell — a Brooklyn kid who was pretty good at the drums — was invited to join the punk band the Ramones. One name change, many records, tours and death-defying adventures later, Marky Ramone has written a memoir of about his career, Punk Rock Blitzkrieg: My Life as a Ramone.

The other Mark(y) famous for his contribution to pop music was Mark Wahlberg, back in the days when he was Marky Mark. We'll see if Ramone can correctly answer two out of three questions about Marky Mark and the Funky Bunch.

And now the game where we reward somebody who's had a long, fulfilling career with a short few minutes of something else. It's called Not My Job. So 40 years ago, Mark Bell was a Brooklyn kid who already had success playing the drums when he was asked to join the seminal punk band, the Ramones. One last name change and many records, tours, and death-defying adventures later, Marky Ramone has written a memoir of his days with that and other bands. Marky Ramone, welcome to WAIT, WAIT ...DON'T TELL ME.

RAMONE: All right, how are you?

SAGAL: So let's start from the beginning. Your name was not originally Ramone.

RAMONE: We just wanted to, I guess, sound alike - a gang or a bunch of brothers. So that was the whole idea of using the name Ramone.

SAGAL: Right. The New York scene - music scene - in the late '60s and '70s, which you were a part of, it seemed like everybody was starting a band, hanging out together downtown. It just seemed like you were in the middle of this insane scene.

RAMONE: Well, yeah. We were very grateful that we had a place like CBGB to play because at the time, nobody wanted to bank on that genre of music that we call punk. A lot of the stadium rock was you'd look at one of their albums. They had about six songs on them opposed to 14, which is what the first Ramones' album had on them. And they were short and sweet two- minute songs. And they wanted to go back to the original intent of rock 'n roll. So that's why when the Ramones started and Blondie and Talking Heads and Television, Patti Smith, Richard Hell - wanted to bring back rock the way it was intended to be with like Little Richard, Chuck Berry, Jerry Lee Lewis, Elvis Presley, all those guys.

SAGAL: Yeah. And you were - you were just like four guys - drums, bass guitar, and lead vocals. I mean, it's amazing...

SAGAL: Yes, to put it mildly. Sometimes no tuning at all, to be fair.

RAMONE: No tuning at all.

SAGAL: It was kind of crazy. I mean, watching you guys must have been an incredible experience playing those shows.

SAGAL: The concerts, as well - one of the things you write about in the book, which I can't quite get over is that your audiences were enthusiastic - the kids in those days...

SAGAL: ...Sometimes expressed their enthusiasm for you guys playing by spitting on you.

RAMONE: Oh, that was just wonderful.

RAMONE: Anyway, believe it or not, that was their show of appreciation. So, I mean, everyone has their own style I guess.

SAGAL: Did you guys get used to that where you were like, wow, they didn't really spit on us tonight. I wonder what we did wrong?

RAMONE: Well, I'll tell you. I was in the back, thank God, and my cymbals protected me, but they did rust from...

RAMONE: Anyway, yeah that was called garbing (ph). That was an English term and it originated there. And we didn't like it coming from America because we didn't understand it. And, of course, we didn't like it. But believe it or not, that was their way of showing their appreciation.

SAGAL: A lot of musicians we talk to on the show - I say, oh, what about the rock 'n roll lifestyle? And they go oh, it's all overblown, really. We were in bed by 10. You guys lived it.

SAGAL: Yeah. I have to - I mean, I have to say to say - and I know your band mates are no longer with us, but at the same time, I'm amazed you guys survived as long as you did given some of the stories you tell.

RAMONE: Yeah, it is. We were definitely freaks of nature.

RAMONE: Well, not for me.

RAMONE: For the bass player who was known to indulge.

RAMONE: And they knew we were filming there. And the next thing we know we'd go to the fence and sign autographs. And we would get all these drugs thrown over the fence - pills, pot, anything. And Dee Dee, our bass player would just put it in his pockets, and then he would put his hands in his pockets and start taking them. He didn't even know what they were.

SAGAL: I got to ask you one last question before you play the game. You tell a story later in the book - you go into rehab 'cause you had your own problems with some substance abuse. You get out, you're clean, and you decide to go to work as a bicycle messenger?

RAMONE: Yeah, I was advised by a psychiatrist to do other forms of work which involved physical labor to stay in shape. I had a drinking problem for a while, and they said stay out of the music business and just do different things. It definitely kept me in shape.

SAGAL: I can imagine. But my question is, you're a bike messenger in Manhattan. You show up with a package. You're wearing your spandex and your helmet. You walk in at some law office - and did anybody ever look at you and go, Marky Ramone?

RAMONE: One guy - one guy recognized me when I was pushing a cart down Broadway. And he said Marky, what are you doing? I go pushing a cart.

SAGAL: Ask a stupid question, you get a stupid answer.

RAMONE: And that was it.

SAGAL: Speaking of stupid questions, we are delighted to have you here.

SAGAL: And we have asked you here, Marky Ramone, to play a game we're calling...

SAGAL: So the other Marky, famous for his contribution to pop music was Marky Mark, which is what the actor Mark Wahlberg used to call himself before he grew body hair. Answer two out of three of these questions about Marky Mark and the Funky Bunch and we'll give Carl Kasell's voice to one of our listeners on your behalf. Bill, who is Marky Ramone playing for?

SAGAL: Wow, Luxembourg. Who knows? They could've been spitting on you back in the day.

SAGAL: So Marky Mark, for those of you who don't remember, was a brief sort of - I guess it was almost a novelty act with Mark Wahlberg. Much like their leader Marky Mark, members of the Funky Bunch had their own nicknames, including which of these? A, Hector the booty inspector; B, Marvin the band accountant; or C, Ziggy Miggy Riggy Piggy Iggy?

RAMONE: I would say the first one.

SAGAL: You'd be correct. Hector the booty inspector was an important part of the Funky Bunch.

BRIAN BABYLON: He still - he still calls himself that.

FELBER: Although in fairness, he is now a proctologist.

SAGAL: Next question, in addition to two best-selling records, Marky Mark and the Funky Bunch are also known for what achievement? A, setting a record for the use of baby oil in one music video; B, creating what many experts say is the worst videogame of all time; or C, developing a new kind of Sharpie called Marky Mark's Marky Marker?

RAMONE: I would say number two.

SAGAL: You're going to say number two? Creating the worst videogame of all time?

SAGAL: You are correct.

SAGAL: Videogame for the Sega system was called Make My Video, and the player gets to assemble various clips and make a Marky Mark video, which you don't - which you can't save, apparently. So it was very terrible. All right, let's see if you can go perfect here. Marky Mark or Mark Wahlberg, has been a successful musician, model, and now, of course, a very famous actor and producer. He has said his ultimate goal was to be a professional golfer but he says he has now given that dream up. Why? A, 'cause quote, "no pro golfer has gone on to be president; because B, quote, have you seen the pants those guys wear; or because C, he's a terrible golfer?

RAMONE: I would say B.

SAGAL: You would say B, that he doesn't want to wear the pants the pros wear?

SAGAL: I actually think he would not wear those pants. He's a fashionable guy, but the answer was C. He has admitted that his dreams of becoming a professional golfer will not work out because he doesn't play golf well enough.

SAGAL: Bill, how did Marky Ramone do on our quiz?

KURTIS: Marky was on his way for WAIT WAIT glory, but you fell short by one. You're still a winner with two out of three.

RAMONE: That was pretty good.

SAGAL: Marky Ramone was, of course, the drummer for the legendary band the Ramones. His new memoir, which is an amazing piece of pop cultural history is called "Punk Rock Blitzkrieg: My Life As A Ramone." It's out now. Marky Ramone, thank you so much for talking to us. What a pleasure.

SAGAL: In just a minute, Bill smokes a doobie with his rabbi. Call 1-888-WAIT-WAIT to join us on the air. We'll be back in a minute with more of WAIT WAIT ...DON'T TELL ME from NPR.