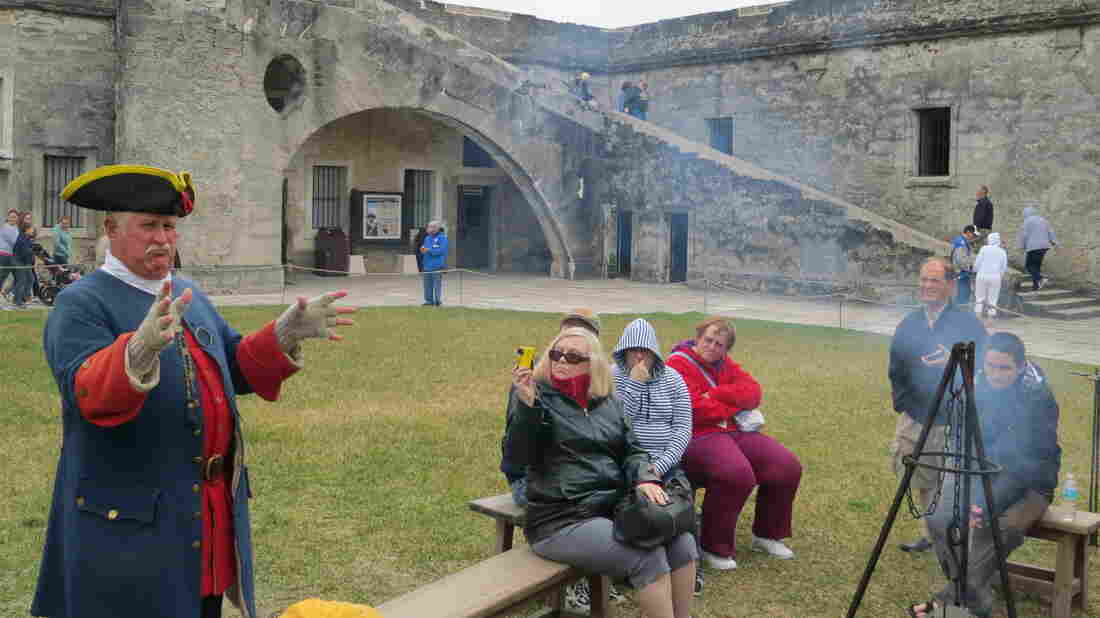 Park Ranger Mike Evans at the Castillo de San Marcos says the Spanish were roping cattle and pruning their citrus groves in St. Augustine before the British even set sail for Jamestown. Peter Haden/NPR hide caption 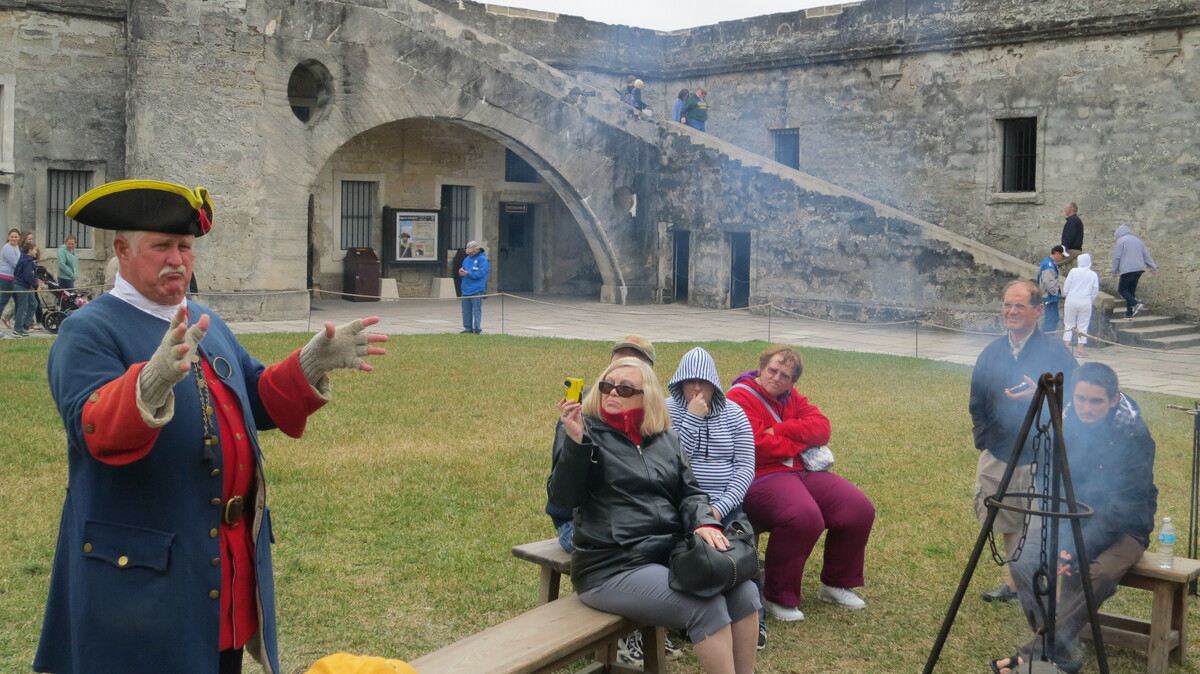 Park Ranger Mike Evans at the Castillo de San Marcos says the Spanish were roping cattle and pruning their citrus groves in St. Augustine before the British even set sail for Jamestown.

Clyde and Corrita Warner came to St. Augustine on vacation from Louisville, Ky. They know their history.

"Well, I knew that this started before the Pilgrims landed and before Jamestown," says Corrita. "You know, this area was first."

St. Augustine treasures being the first — and oldest — city in the United States. So when the area around Jamestown, Va., adopted the title "America's First Region" a while back, the gloves came off.

On Saturday, residents begin a yearlong celebration to honor St. Augustine. Founded 450 years ago, it's the oldest city in the United States.

"You don't have to be much of a mathematician to know that St. Augustine was settled first," says Richard Goldman, executive director of the city's Visitors and Convention Bureau. "Jamestown was about 42, 43 years later, so for Jamestown to claim to be where the country began just doesn't settle well with history."

There's plenty of history in St. Augustine. The original Spanish fort, the Castillo de San Marcos, was built in the 17th century. Now a national monument, the castillo was built of crushed coquina seashells that the Spanish found here. Light and porous, the coquina walls proved to be compressible, absorbing cannonballs like Styrofoam might absorb BBs. That construction helped it survive for so long.

Park Ranger Mike Evans says the Spanish were roping cattle and pruning their citrus groves in St. Augustine before the British even set sail for Jamestown.

"Bless their hearts," Evans says of Virginians. "I mean, the Virginians have Robert E. Lee and George Washington and Thomas Jefferson, and that's fine, you know. But here — we introduced the oranges to the New World!"

Spanish explorer Ponce de Leon landed at St. Augustine and claimed La Florida for the King of Spain in 1513. According to legend, he was searching for the fountain of youth.

Now, visitors at the Fountain of Youth Archaeological Park in St. Augustine can enjoy a bottle of water from a spring on the property — "Proudly sipped for over 500 years," boasts the park's website.

It's not known if Ponce de Leon actually discovered the spring, but the Fountain of Youth park does contain the 1565 landing site of Pedro Menendez de Aviles, who was sent by the Spanish to set up a colony to dissuade the French from claiming the territory. Menendez de Aviles established St. Augustine, making it the oldest continuous European settlement in the United States.

But Jamestown, and southeast Virginia, are the location of a number of significant firsts, says Paul Levengood, president of the Virginia Historical Society.

No doubt, Virginia brought a lot of Europe to the table. But here in Florida — during this celebration of St. Augustine as the country's oldest city — leaders know who really came first.

Kit Keating, director of the Fountain of Youth park, finds Jamestown's claim to be the first somewhat amusing.

"I love it!" Keating says with a chuckle. "And the grandchildren that were cavorting around here when the settlement of Jamestown was founded might giggle."