Accessibility links
Mr. Spock And The Consolations Of Solitude Mr. Spock was famously the Starship Enterprise's resident emotionless alien. But writer Elizabeth Graham says many alienated teenage nerds found something to love and share behind that mask of calm.

Mr. Spock And The Consolations Of Solitude

Mr. Spock And The Consolations Of Solitude 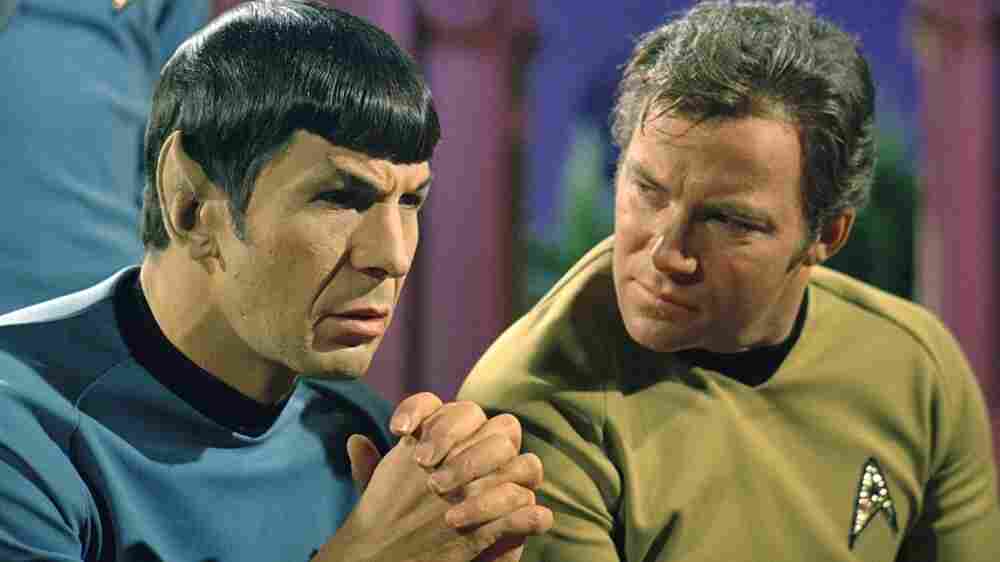 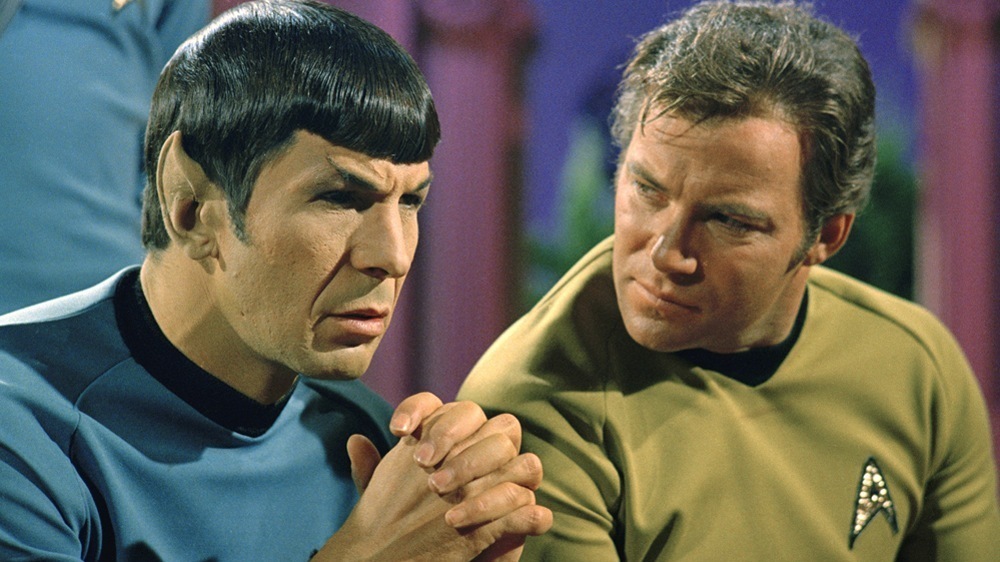 Spock was famously emotionless, but that didn't stop him from forming intense friendships with his shipmates, particularly Captain James T. Kirk.

One of the turning points of my life was the day I talked my strictly-no-TV-ever parents into letting me watch Star Trek. And by Star Trek, I mean the original series; at that time there were no others. There was also no such thing as the Internet. We had vaguely heard that a thing called a "modem" had been invented, but it wouldn't be relevant to our lives till some years later.

"No one ever forgets the gateway character — Obi-Wan? Batman? Jareth? Alanna? — who guided them into full-blown nerdery. So it's no exaggeration to say that my life changed, that I changed, when I met Spock."

What I'm getting at here is that, if you were a nerdy 5th grader in the mid-1980s, you were really isolated. You maybe had one or two fellow nerds to talk to, if you were lucky enough to find them. But your main form of communion was in fictional universes, with fictional people. No one ever forgets the gateway character — Obi-Wan? Batman? Jareth? Alanna? — who guided them into full-blown nerdery. So it's no exaggeration to say that my life changed, that I changed, when I met Spock.

As Star Trek creator Gene Roddenberry and the show's other writers depicted him, there was a lot about Spock for a school-age nerd to relate to. For me, the significant thing about Spock was that, in so many ways, he was always alone: He was the only alien on the Enterprise's bridge crew; his emotions were under strict Vulcan control, so he could never talk to anyone about how he felt. Instead, his role was that of the eternal observer. He channeled all the emotion he never allowed himself to express into a vast intellect that represented his main value to the ship on which he served. I think that pretty much encapsulates the educational experience of the teenage nerd.

He Was, And Will Always Be, Our Friend: Remembering Leonard Nimoy

Then there was the whole thorny question — as thorny to a teenager as to a Vulcan — of romance. James T. Kirk, the Captain of pomaded hair and shredded shirts, flirted his way around the universe, ending up in the arms of a different woman every episode. For Spock, the whole affair was a spectator sport. Whenever it became participatory, it was always against his will or better judgement: Mind control, ill-fated arranged marriage or even (on one memorable occasion) alien sex pollen. The unspoken rule of Star Trek seemed to be that if Spock ever kissed a woman, it was somehow wrong. The intimacy he sought was instead intellectual and emotional, resulting in intense friendships with a few of his shipmates. Spock's Bogie-and-Bacall bickering with Dr. McCoy and his unique bond with Kirk are legendary.

Conversationally, I've learned that for a generation of young LGBTA fans — as well as for awkward heteros like me — Spock's eternal solitude-in-company is a consolation: Heterosexual romance is not the only metric of success. You can be unromantic, uncomfortable or simply decline to partake, and still be valued for your skills and qualities; you can make the occasional spectacular mistake and your best friends will still be there for you and loyally pretend nothing happened.

In fact, the original Star Trek is blessedly free of the notion that marriage and reproduction are the only happy ending. In fact, what matters is surviving to get back to the ship and your friends and your life's work, and leaving orbit to explore strange new worlds. Star Trek, and Spock, taught us that friendship isn't a second prize or a poorer substitute for romantic love; rather, it's the only thing that can get you through a five-year mission — or three seasons' worth of it, anyway. (Let's not talk about the recent J.J. Abrams reboot, in which Spock ends up with Lt. Uhura — an unimaginative choice that rejects infinite story possibilities in favor of Hollywood's insistence on pairing single characters off at all costs.)

I never met Leonard Nimoy. But through the character he and Gene Roddenberry created, he made me — and millions of other lonely, nerdy souls — certain we weren't alone here.

Liza Graham is a mezzo-soprano, writer and Star Trek fan, born in Washington, D.C., and living in London. She has been a critic and columnist for the Metro papers, as well as a guest blogger at mightygodking.com. Her poetry has been published in Goblin Fruit magazine.