Accessibility links
Review: 'Lamentation,' By C.J. Sansom The sixth volume of C.J. Sansom's Shardlake mysteries is set during the last days of England's King Henry VIII, as a potentially explosive religious manuscript written by his queen has gone missing.

A Vivid Portrait Of Tudor Turmoil In 'Lamentation'

A Vivid Portrait Of Tudor Turmoil In 'Lamentation' 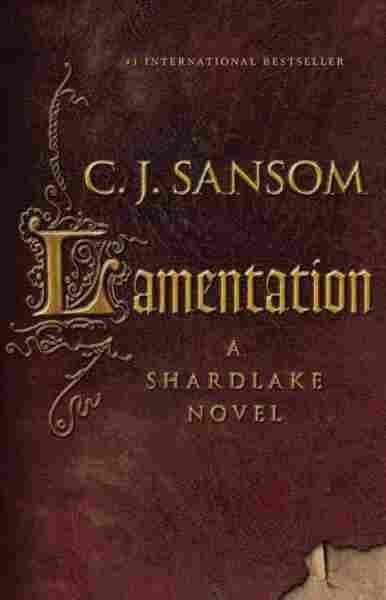 We start with a pyre: A young woman and three men are to burn, condemned as heretics. In vivid, often graphic prose, C.J. Sansom uses this horrific scene to set the stage for Lamentation, the sixth installment of his Matthew Shardlake mysteries, set in Tudor England. It's 1546; the dying King Henry VIII — having broken with Rome a decade before — is wavering on religious policy, and supporters of his previous reforms fear for their lives as the hunt for heretics intensifies. Sansom uses the gruesome spectacle of the burning to reintroduce us to Shardlake, his hunchbacked, mystery-solving lawyer, and most of the king's inner circle.

Lamentation follows the maneuverings of this divided group of Protestants and Catholics; both sides feverishly plotting to influence the King. At the center of it all is Catherine Parr, Henry's last queen and a devoted Protestant. Believing the king firmly on her side, she's secretly penned a reformist tract called "Lamentation of a Sinner." But the book is missing, and Parr and her family are suddenly unsure which way the wind will blow — King Henry famously had two wives beheaded, and Queen Catherine is afraid of what might happen if the manuscript is published. Shardlake, who helped save Catherine's life in a previous book, is brought in to investigate and recover the manuscript.

Religion has never been far from the Shardlake novels. It could not be: Henry VIII's decision to split with Rome (in order to marry Anne Boleyn, his second wife) was one of the most extraordinary events in English history. In fact, Shardlake's first investigation was a murder in one of the monasteries the king had dissolved. But Lamentation is by far the most explicitly religious of these six books. It's also perhaps the most richly researched — there are pages of notes, and the acknowledgement largely thanks historical sources rather than living people.

It's precisely this in-depth research and the atmosphere Sansom brings to his historical mysteries that make them worth reading. In his writing, 16th century London is vividly alive: The bustle of its streets, its many stenches, and the markets where a "rat-catcher in a wadmol smock" shouts for attention next to a woman selling "hot pudding pies" from a basket on her head. Atop these vibrant streets, Sansom layers a rich depiction of English court life and all its pretentions and splendors.

Then there's Shardlake himself, an extremely likable character. Now in his 40s, he remains acutely aware of his physical deformity — and like most intelligent people, he's riddled with doubts. He's also a single man and his longings are entirely human; let's just say he's no 16th century James Bond. Perhaps he's too improbably nice — yes, there's the odd stab of anger, or irritation or jealousy, but Shardlake is for the most part generous, unselfish, kind, and caring, especially to those who work for or with him.

At over 600 pages, Lamentation perhaps takes a little too long to reach its satisfactory, if slightly limp, conclusion. The way there winds through a labyrinth of machinations, some swashbuckling sword fighting (though none by Shardlake), plenty of dead bodies and often times belabored theological discussions. (There's also a side plot that goes almost nowhere, and which Sansom could probably have just done away with.) And by book six, the series has lost some of the charms of novelty. But thanks to Sansom's ability to balance deep historical research and gripping storytelling, Lamentation holds its own.