Accessibility links
Interview: Larry David, Fish in the Dark The comedian wrote and stars in Fish in the Dark, a play about rivalries and dysfunction when a family patriarch dies. David says the idea came to his "twisted mind" when his friend's dad passed away. 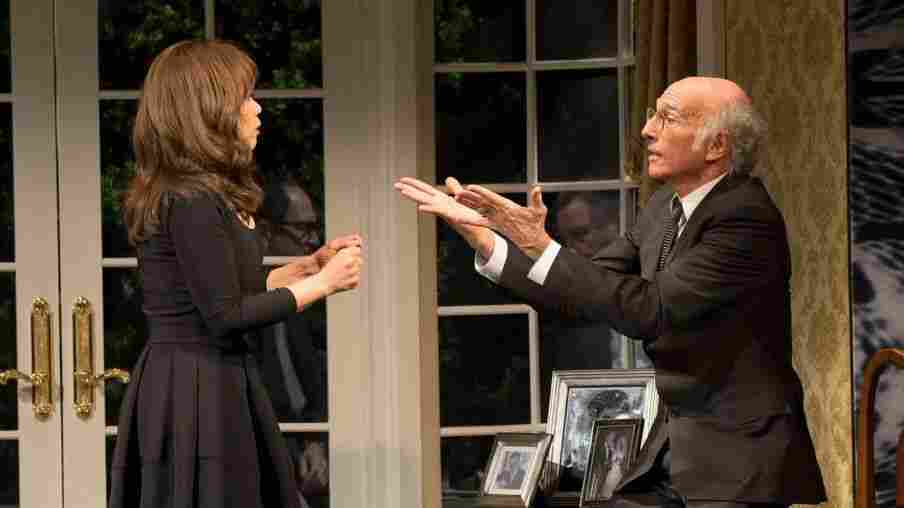 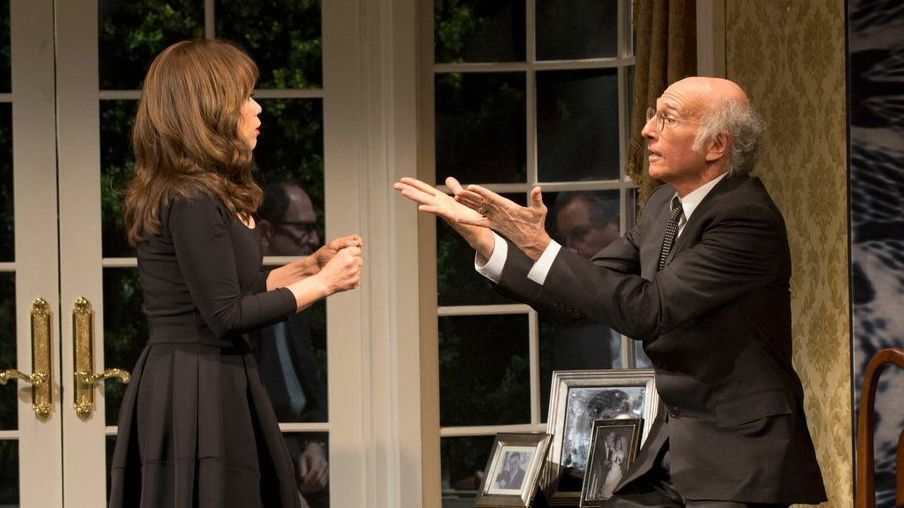 Larry David wrote and stars in a new play that has broken the all-time record on Broadway for advance ticket sales — more than $14 million. Fish in the Dark is a comedy about a family's rivalries and dysfunction as its patriarch passes away. David tells Fresh Air's Dave Davies that the idea came to him when a friend's father died.

"He started telling me about it, and to the twisted mind it actually sounded ... funny — the whole incident sounded very funny to me, how it was unfolding," he says. "And I thought, 'This could be a play.' And two weeks later I actually sat down and started writing."

Jayne Houdyshell plays the widow, and David plays one of two sons (the other is played by Ben Shenkman). David says he didn't want to play the lead character, but he "got roped in."

"The producer, Scott Rudin, said, 'This sounds like you. You have to do this.' And of course it did sound like me — the main character — so I don't know. I thought, 'Well, I wonder what that will be like to do something like this.' Now I know. ... It's not so easy!" 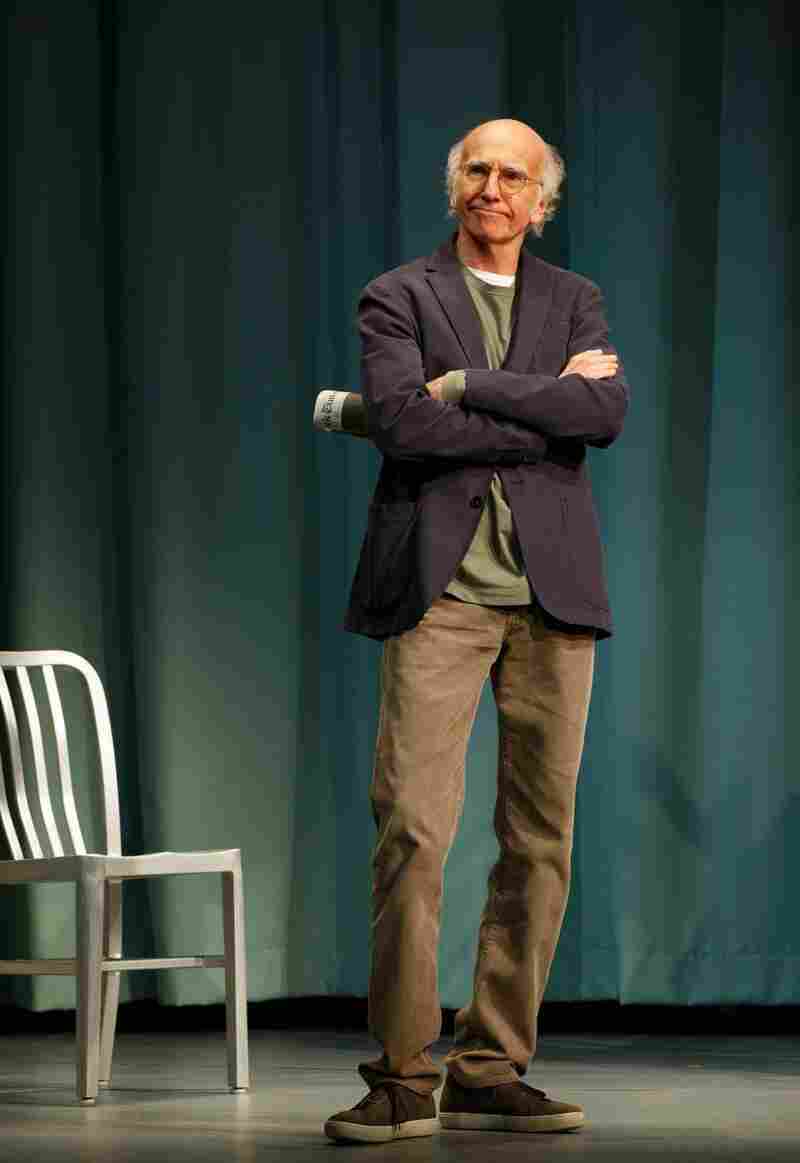 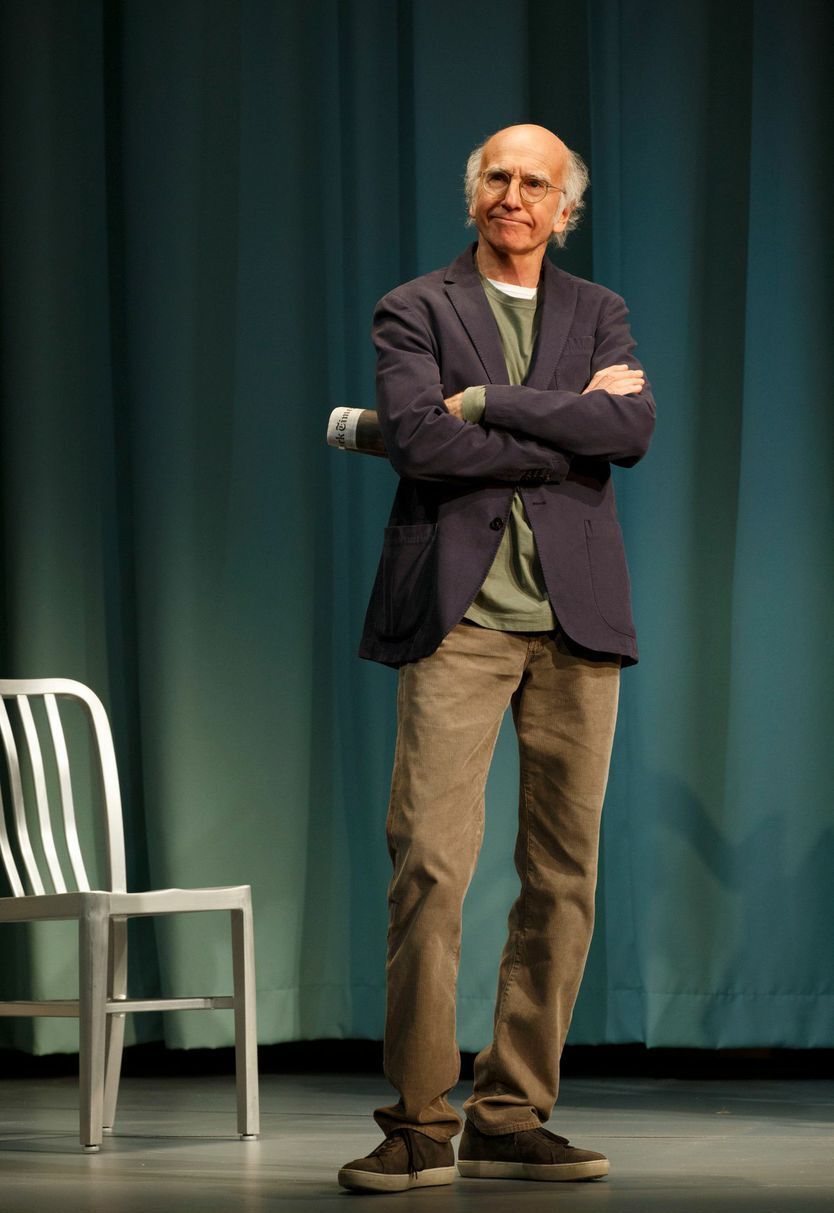 David has a distinct comic sensibility, and from his years playing a version of himself on the HBO series Curb Your Enthusiasm, a very recognizable voice and persona. And while the Larry David of Curb Your Enthusiasm could be misanthropic, audiences took to him.

But David says acting in a play is different: It's "a lot of pressure," and it was completely new to him. "You got to make a thousand people laugh every night with a script; it's not like doing stand-up," he says.

One of the most challenging parts is having to stick to that script.

"I have total freedom on Curb to kind of say and do anything I want," he says. "I can follow every impulse that I have and I'm allowed to interject when other people are talking. I'm kind of writing the scene as we're doing it. But this play is a different animal. You have lines, there are cues that are very important. If you just screw up one line, you're off track and it's hard to get back on. Yeah, you have to abide by the script and the other actors don't like it if you get off of it either."

Despite the restrictions, David hasn't changed his comedic technique.

"I'm making the same stupid faces I would normally make, probably," he says. "I can tell when I get reactions from a glance or some kind of reaction I'm making — I know when the audience is amused by it."

Fish in the Dark opens Thursday.

I wasn't funny at all; I didn't even suspect that I had a sense of humor until I went to college and then something kind of changed. I don't know what happened — perhaps it was meeting new friends and being in a different environment that unleased something in me. I don't know.

"I wasn't funny at all; I didn't even suspect that I had a sense of humor until I went to college and then something kind of changed. I don't know what happened."

I don't remember having any ambitions, any goals, any dreams. It was always, "How am I going to get by? What am I going to do?" But, to be honest, I didn't really give it much thought. Even in college I didn't give it much thought. I was having fun in college and basically when people asked me what I was going to do I just said, "Something will turn up." What that was, I had no idea. ...

[My parents had] zero expectations. My mother ... she wanted me to work in the post office. She wanted me to be a mailman because she thought I'd get a pension and I'd be taken care of — I would have security. That was her dream. That was the best-case scenario: that I would be a mailman.

On getting into comedy

I got out of college and I was funny with my friends and my friend's wife said, "You should be a comedian." And I thought, "Really?" That hadn't occurred to me. Then I went to the improv [comedy club] ... to watch a show and as I'm watching the show I'm starting to think, "Maybe [she's] right, maybe I could do this."

Much To His Chagrin, On Broadway Larry David Has To 'Wait And Talk'

In fact, not only am I starting to think I could do it, I think I could be really funny up there. Not only that, I'm going to go up there right now! I go up to the owner of the club ... and I say, "I'd like to go on." I'm just sitting in the audience on a Saturday night, I leave my seat and I go talk to the owner ... and say that I want to go on. This is probably the most insane thing I've ever done in my life. He said to me, "Who are you?" I said, "I'm just sitting in the audience." He said, "No, you can't go on! Are you a comedian?" I said, "No." He said, "No, you have to audition and then if you pass the audition then you can start going on." Thank God he said "no" because had he said "yes" and I had gone up it would've been a disaster, and I may never have walked up on a stage again for the rest of my life.

On not compromising his artistic vision

I don't think that my hand would've cooperated with my brain if my brain was telling my hand to write something it didn't really want to write. I remember when there was some interference from NBC with Seinfeld [which David co-created] when we first started doing it, and fortunately I didn't have a family at the time, so it was very easy for me to say to them, "No, I'm quitting. I'm not going to do that. I don't want to do that and I can't do it." And for me, it wasn't a big deal to just pack up and go home. ...

"When you say 'no,' you invariably get your way and it's a wonderful feeling. I can't believe I never did it before!"

[NBC] just didn't like the direction of the show, for example the Chinese restaurant episode. They hated that show; they didn't even want to air it. There was a big meeting about the kind of shows they liked and the kind of shows they didn't like, and I just said, "Well, I'm not going to be able to do that." So I thought I would quit. But then I learned another lesson: That when you say "no," you invariably get your way and it's a wonderful feeling. I can't believe I never did it before!

The character has emboldened me to be much less inhibited and to take on a lot of the things that the TV Larry David does. If I'm at a dinner party and I want to go home, I can go, before dessert, "OK, I've had enough. All right, I'm gonna go." And nobody would be shocked to hear me say it, whereas I could never do that before Curb. And now people are not surprised and they kind of expect it.