Accessibility links
After 60 Years Of Fabulousness, Dame Edna Embarks On Her Farewell Tour The housewife and superstar — a creation of Australian comedian Barry Humphries — says it's not entirely clear what her retirement will look like. "I'm a restless spirit," she says. 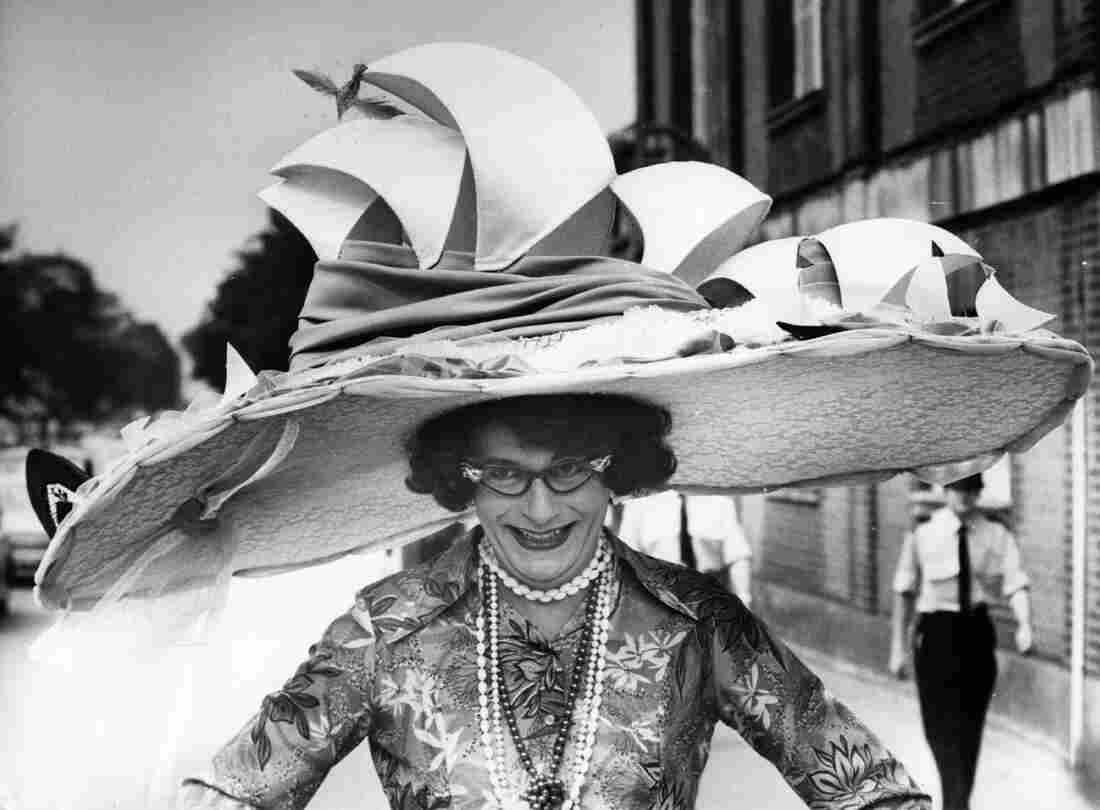 Dame Edna Everage says she's approaching 60 — but from the wrong direction. The housewife and superstar — a creation of Australian comedian Barry Humphries — has been making audiences laugh, weep, have acid reflux, and ruminate deeply on the human experience for six decades.

Now, she's embarked on Dame Edna's Glorious Goodbye: The Farewell Tour, which concludes in Washington, D.C., in April. Dame Edna tells NPR's Scott Simon that she's a "restless sprit" and it's not entirely clear what "retirement" will look like for her. 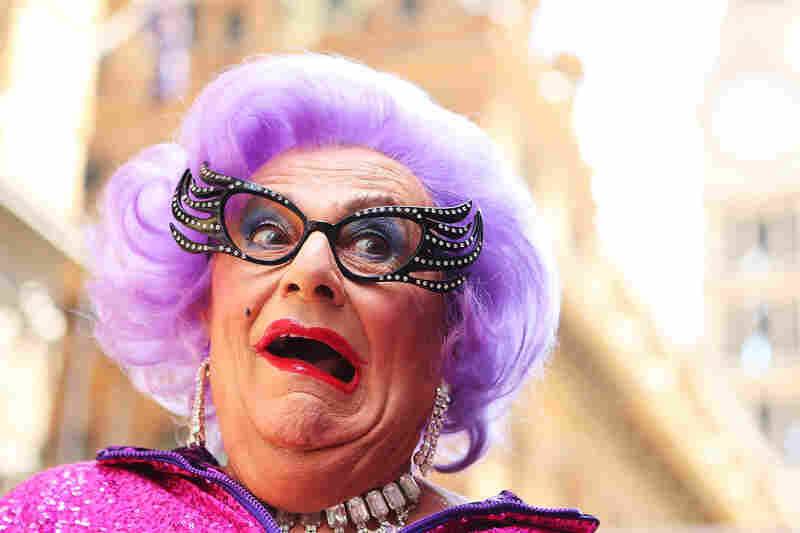 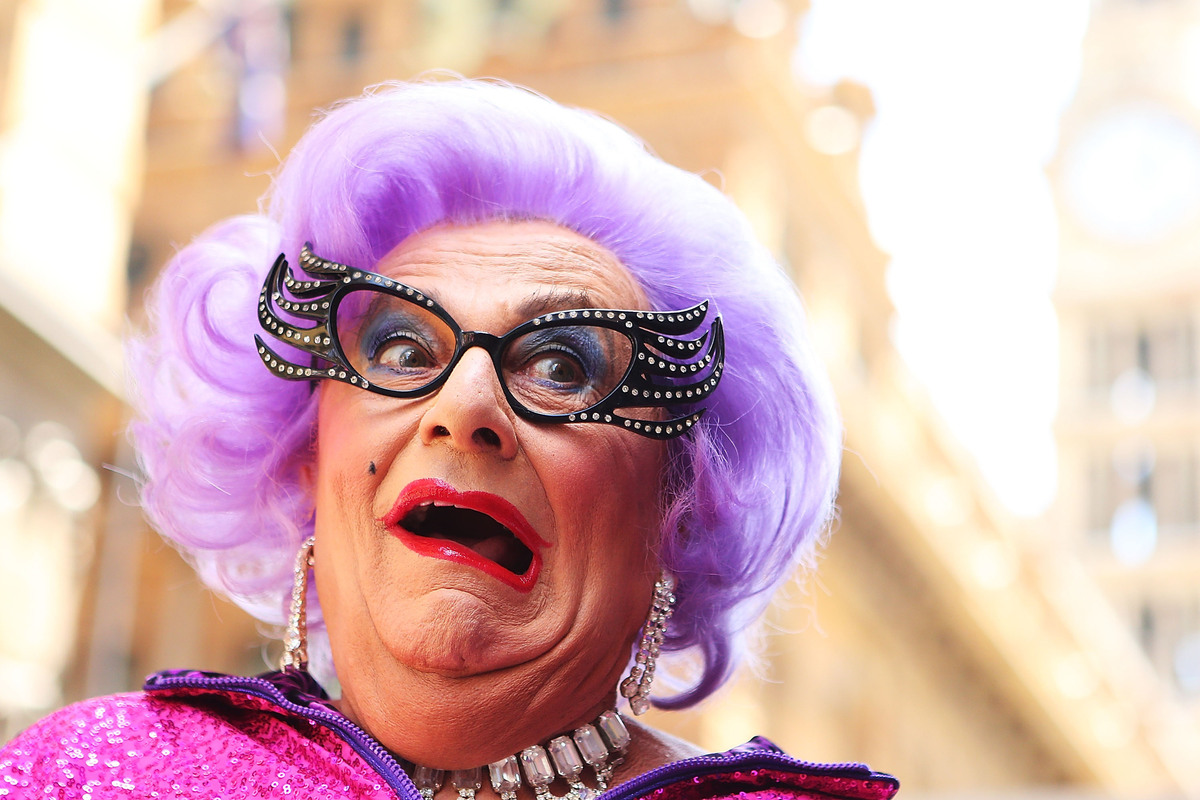 Dame Edna participates with her fans in a Zumba fitness class at Martin Place in Sydney, Australia, in January 2013.

I'm not like a number of stars that I could mention who announce farewell tours, collect the money, and then come back a year later and expect to do it all over again. I consider that dishonest. It doesn't mean I'll disappear. I might do television things. ...

But, on this tour, I really find, not just strange hotels — even though I'm in the luxury penthouse so often — but airports, darling. I mean, going through that whole business. I think your listeners probably think that I just get swept straight through, but it's not the case. And I've never had a private plane, I don't believe in that kind of elitism. But I have to pretty well take all my clothes off. I have to subject myself to pretty ruthless searches — some of them an affront to my modesty, frankly.

On how she's kept her looks all these years

"I looked at my face about 10 years ago ... and I thought to myself, 'What have I done? A pact with the devil? Why am I looking so young and so unconventionally lovely? Why?'"

It's so simple. Now, I looked at my face about 10 years ago ... and I thought to myself, "What have I done? A pact with the devil? Why am I looking so young and so unconventionally lovely? Why?"

And, I thought what I need to do is to age myself in some way. I have to look normal. People won't believe it! So I went to Brazil, and I saw the top man there, of course, a cosmetic surgeon. And I said, "Look, I need to look my age!"

He said, "Well Edna your hair is still a natural, very, very natural mauve." I was born, by the way, Scott, with this color. I was. It's very unusual. Very unusual. ... But, I said to the doctor, "Well what can you do?"

And he said, "Well Edna, you must have some little crow's feet! ... We'll give you some crow's feet."

And he said, "What you need – your neckline is perfect! You haven't got that horrible turkey neck." He said, "You need a little soft, double chin. A soft little pillow, a little cushion under your chin." ...

Not My Job: Dame Edna Everage Gets Quizzed On Farewell Tours

And do you know what he did? I saw him delving in a sort of white box, a freezer. And he pulled out a little shrink-wrapped package. It looked like a chicken breast. And he said, "We'll stitch this on. And it will settle in. And it will give you a lovely double chin."

And I said, "What is that?" He said, "What? More like what was it, Edna ... That was Elizabeth Taylor's left love handle."

Elizabeth Taylor's love handle is now my soft, little chin. And if you look at it very closely, you can see some indentations where Richard Burton's fingers held. ... Isn't it beautiful? It's history in my face. History.