Accessibility links
Review: Chastity Belt, 'Time To Go Home' For a record that aims to interrupt and rewrite the machinations of college-age womanhood in 38 minutes flat, Chastity Belt's new album is remarkably easygoing. 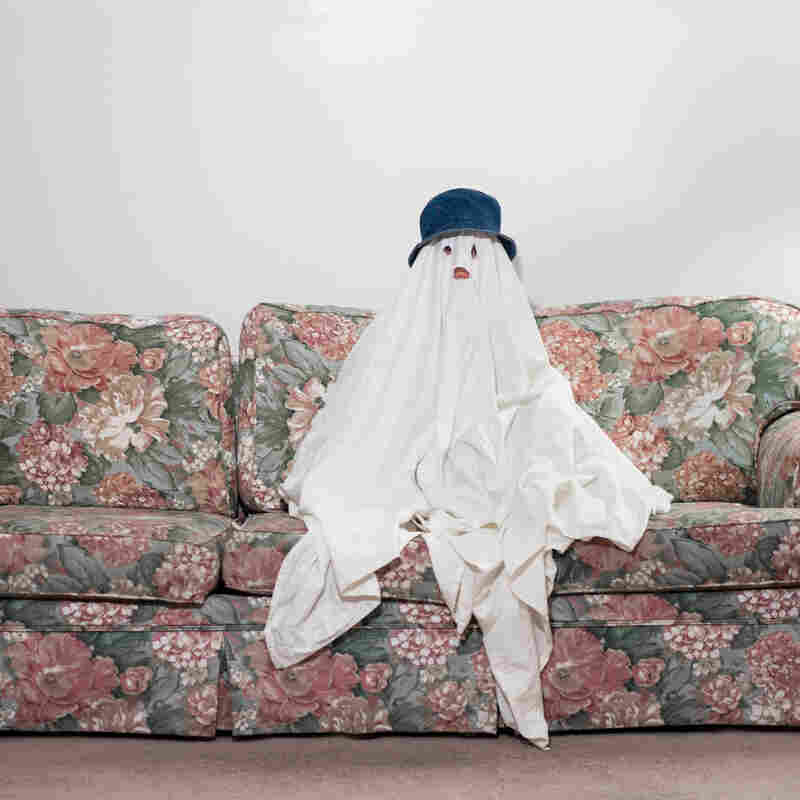 A small town is the perfect place to start a legend. There aren't as many witnesses to contradict a story, and those who are present are more likely to defend and encourage lore that boosts local mystique than contest it. The way they tell it, Annie Truscott, Gretchen Grimm, Julia Shapiro and Lydia Lund arrived at a frat party in rural Walla Walla, Wash., flipped over a ping-pong table, screamed "CHASTITY BELT," and threw together a one-song punk act that won them a school-wide Battle Of The Bands and turned them into musicians. Whitman College, where all four were students at the time, is a tiny liberal-arts college, with an accent on the liberal and the arts; a one-off demonstration at a Beta function isn't necessarily newsworthy. More remarkable is that Chastity Belt, the band born that night, has in the three years since graduation turned probably apocryphal college antics into a vital statement reverberating well beyond Boyer Avenue.

For a record that aims to interrupt and rewrite the machinations of college-age womanhood in 38 minutes flat, Chastity Belt's national-label debut Time To Go Home is remarkably easygoing. At several points, it gives the impression of nonchalance almost to the point of indifference. Don't be fooled. That lack of pretense is the precise locus of this band's message, and of its potential. Shapiro sings at eye level, using minimal swoops and soars as she cruises through short, punchy verses. She, Lund and Truscott back those vocals with restrained, beachy guitar, while Grimm on drums taps the same well of back-to-basics ecstasy that propelled Meg White on The White Stripes' heady early records. All that mellow adds up to the perfect showcase for the brightest star on Time To Go Home: its eye-wateringly relatable lyrics, which also happen to be a Trojan horse of unapologetic feminism.

The politics of Time To Go Home are distinctly millennial, which is the source of their power. Instead of an inability to imagine the world pre-Internet, though, Chastity Belt can't imagine a world without eye-rolling at gendered discrimination. Shapiro sings about the right of women to sleep around in "Cool Slut" like it's obvious; like it's never been anything but "OK to be slutty." "Drone," the Sheila Heti hat-tip bemoaning "just another man / trying to teach me something" in Shapiro's best Jolie Holland growl, is radical because it's not inflammatory — it's dismissive, a far more devastating blow to mansplainers everywhere. This is feminism as fact; as default. It's on the other end of the energy-expenditure spectrum, but this tactic is a movement the way Meredith Graves and Perfect Pussy are a movement. It's the evolution of how young women impart vitally important information.

Pointed nonchalance is an under-explored avenue for young women bucking patriarchal pressures, and Time To Go Home functions as a flashlight in the woods. Shapiro wonders if it's "cool not to care" in "IDC" — which, for those past a certain age, stands for "I Don't Care." The song arrives toward the end of the album, and reads as rhetorical in the context of the nine songs before it. Four coeds flipping over a table at college in the name of punk rock is not caring. Moving to a big city, tirelessly honing their craft for three years, releasing two albums and doubling down on the message they sent that night in Walla Walla is something else entirely.