Accessibility links
Review: 'Seth Avett & Jessica Lea Mayfield Sing Elliott Smith' Each of Smith's records contains an abundance of small, perfectly formed gems. There are too many to pick from, but just about any would shine anew under this type of respectful reinterpretation. 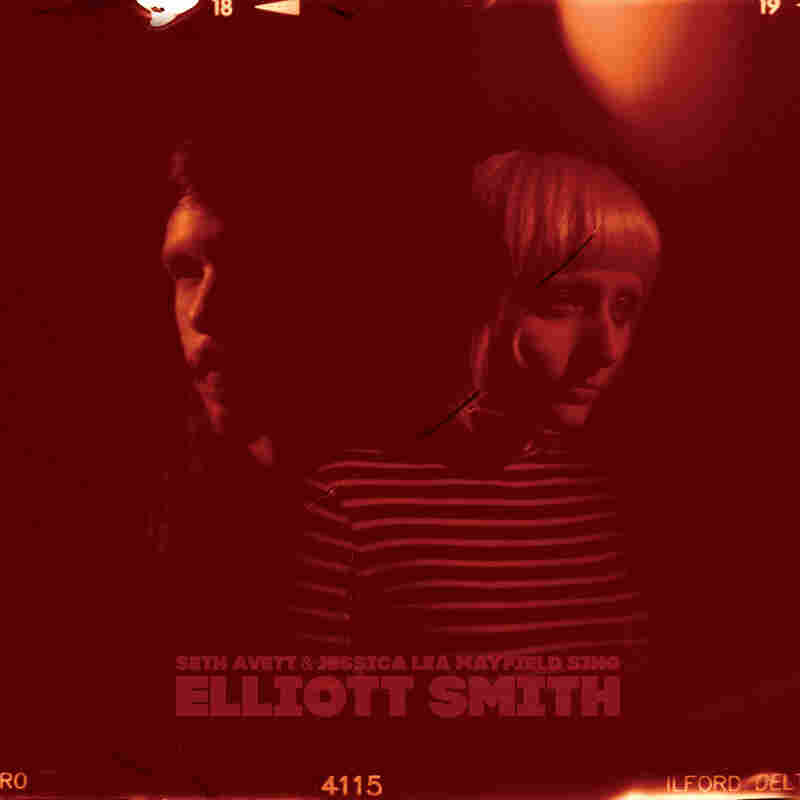 Working as a music journalist means that some days you get to tell people, in breathless prose, about an incredible new record you've discovered. On other days, you have to tell people that an artist you've followed and respected for years is no longer living. That part is never any fun. Listening to the hushed, elegantly spare Seth Avett & Jessica Lea Mayfield Sing Elliott Smith, I found myself transported back to the period right after Smith died, of apparently self-inflicted stab wounds, in 2003.

Even knowing Smith's general state — he'd struggled with depression, as well as alcohol and drug dependence — the news hit hard. This was, after all, the most erudite, sophisticated songwriter of his generation. And, though he'd attracted some attention (including an Oscar nomination for "Miss Misery," from Good Will Hunting), it was already clear that his work would only grow in significance over time. His songs deserve to become "standards" of a sort, studied by future generations, enduring while the songs of more famous contemporaries fade.

Over the years, many earnest interpretations of Smith's songs have surfaced, and while they diverge stylistically, they all share one key trait: respect for the precise detail Smith brought to his craft. It's impossible to fully inhabit an Elliott Smith song without attending to the tiny stuff at the circuit-board level — structures that veer from pop templates in clever ways; chord sequences steeped in a warm bath of melancholy that transcends language; melodies that weave teenage yearning and an elder's hard-won wisdom into the same beautiful, troubled breath.

Smith was particular about these (and other) elements. His songs are like carefully appointed rooms: He didn't just outline the arrangement of the furniture. His prescriptions included instructions about the temperature and the level of the lighting, the ambiance, the feeling in the air. That's where Seth Avett and Jessica Lea Mayfield start: Though the accompaniment is sparse, each of these 12 covers dwells in an atmosphere that's somehow linked to (or at least glances in the direction of) the Smith original.

Mayfield and Avett didn't seek to reinvent Smith's songs. They simply want to honor them, and this collection is governed, from one whispered note to the next, by humility. At times, the vocal harmonies are cribbed directly from Smith's hushed recordings, but not always: The highlight of "Angel In The Snow" (a song from the Either/Or sessions that appeared on Smith's posthumous New Moon) is a stretch of plaintive, widely spaced vocal harmony that showcases Mayfield's steadiness and poise. The two take turns singing lead, and no matter who has the top line, the emphasis is on the blend; on the overall effect. In more than a few places, Avett and Mayfield evoke the meditative Simon & Garfunkel serenity that Smith achieved through multitracking. Elsewhere, particularly in "Ballad Of Big Nothing," the presence of contrasting male and female voices deepens the intent. Mayfield knows exactly how to maximize the impact of her voice — she sings with almost superhuman restraint that allows each phrase to hang in the air, in shrugging suspended animation.

Avett and Mayfield selected pieces from all over Smith's catalog, dipping into the skeletal early acoustic-guitar-and-voice period ("Roman Candle"), as well as the more ornate post-Beatle pop productions that followed ("Angeles" from Either/Or, "Baby Britain" from XO). That shows considerable confidence, because Smith covered some serious territory in his short career.

Hearing this examination of Smith's songbook, you start by appreciating his discipline, then the way Avett and Mayfield conjure and extend the extreme intimacy of the originals, then the little ways the two shine new light into the songs. Smith's accounts of dependence (on substances, on people) were sometimes delivered as pop rhapsodies, or woozy old-time waltzes, or snarled rock-guitar harangues. And, though sometimes these styles fall outside of Avett and Mayfield's comfort zones, the duo renders each faithfully and gently.

Some of the most intense material here — "Fond Farewell," "Twilight" — is drawn from the collection Smith was assembling when he died, From A Basement On The Hill. These are among his most wrenching compositions: sly juxtapositions of calm against chaos, setting breezy melodies against intense, often brutally blunt lyrics. Smith hit on a compelling balance of heart and head: His accounts of despair hit you with the visceral energy of great rock, while at the same time communicating in a musical language defined by nuance, discipline, order. Smith's music often assaulted the senses with giddy gorgeousness and uplift, even when lurking between the lines was a despondent cry for help.

Avett and Mayfield make good choices here, but inevitably, many who love the music of Elliott Smith will wish to hear the duo tackle other pieces from the catalog. (Maybe in a sequel?) That's a testament to Smith as a tunesmith: Sure, his discography is limited — he made seven solo albums in all, including two posthumous releases — but each of his records contains an abundance of small, perfectly formed gems. There are too many to pick from, and really, just about any would shine anew under this type of respectful reinterpretation.