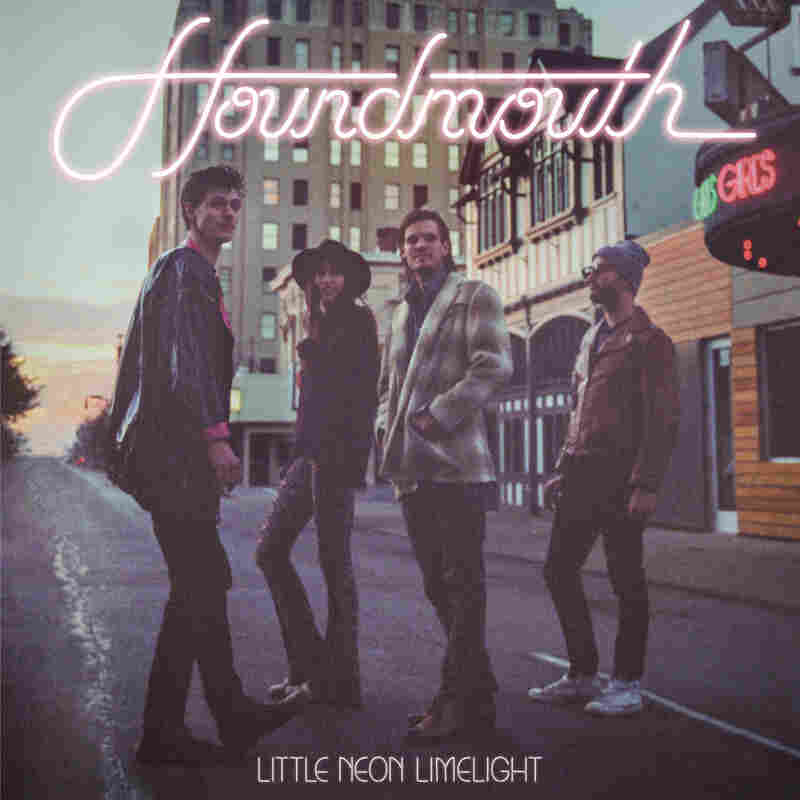 There are four official members of Houndmouth: guitarist Matt Myers, keyboardist Katie Toupin, drummer Shane Cody and bassist Zak Appleby, all of whom also pitch in with the singing and songwriting. But far more people than that contribute to their second album, Little Neon Limelight. Only artful alt-roots producer Dave Cobb, recording engineer Vance Powell and mastering engineer Pete Lyman pop up in the credits, though. The rest shuffle in and out of view over the course of 11 songs, occasionally clumping into motley crowds, like "the notables and their spying wives, three hipsters, two merchants, and Kon Tiki" in the second verse of the wistful folk tune "For No One."

Colorful characters are the Indiana band's bread and butter. Some of the protagonists hail from an older, wilder west. At least one is fresh out of grad school, with a physics degree and a lab coat to show for it. What unites them across eras is the vintage, tall-tale treatment they receive from Houndmouth's members, who portray them as larger-than-life figures, driven by impulse and bent on action.

The comparison Appleby, Cody, Toupin and Myers heard most frequently after 2013's From The Hills Below The City was The Band, that vaunted archetype of multi-narrator, funkily loose, rustic rock. Really, the resemblance came down to this: Houndmouth had shown up working with ingredients both earthen and imaginative, rooted and rootless, much as earlier generations of music makers had found materials for new modes of immediate, idiosyncratic balladry in the sediment of collected folk tradition. As Greil Marcus once wrote of Bob Dylan's fruitful, famously secluded collaboration with the musicians who would form The Band, "[Y]ou could believe in the future only if you could believe in the past, and you could believe in the past only if you could touch it, mold it like the clay from which the past has molded you, change it."

Quite a bit of Houndmouth's reputation has been built on exuberant live shows and the Greek chorus effect of all four voices joining in hale and hearty harmony during nearly every refrain. They tap those sensibilities in even more vital ways on Little Neon Limelight, with a youthful devotion to shaggy, swinging, big-screen storytelling that distinguishes their work from many of their more confessional, serious-minded peers.

The sound of howling wind heightens the desert scene-setting of "Sedona." Brawny guitar licks frame a dashingly wry description of "My Cousin Greg," who's "got a heart that's made of brains" and "fell in love once, and thought about it for a day." An imprisoned convict's ardent vow to get home to his lover, "15 Years" jumps from an amped-up, Buddy Holly-ish attack to a red-blooded, 12-bar blues shuffle and back before finally careening to a halt. Seconds later, a voice can be heard admitting, "Yeah, I totally botched that," a tossed-off inclusion that accentuates the reckless abandon the group brings to the studio. In "Black Gold," a loping, puckish guitar figure propels a yarn about an oil-rich family's hobbling greed, while the wily seducer in the impetuous, down-home garage-pop number "Say It" goads the object of his lust to lower her expectations for the sake of happiness. Unreliable, unshackled, slightly ridiculous characters are the types Houndmouth's members seem to relish singing about most, and the way they go about it feels anything but timeworn.