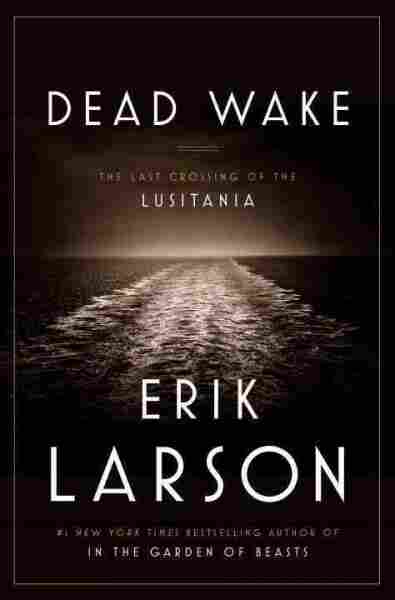 Pier 54 on the Hudson River in Manhattan is padlocked and forgotten now. Like whispers of the past, the engraved names of the shipping companies Cunard and White Star remain barely legible atop its rusted iron gate. Few of the present-day joggers and cyclists who pass by might recall that a century ago, on May 1, 1915, the Lusitania set sail from this berth on her last doomed voyage.

Erik Larson is here to remind us. In his gripping new examination of the last days of what was then the fastest cruise ship in the world, Larson (Devil in the White City, In the Garden of Beasts) brings the past stingingly alive. A total of 1,198 people, including 123 Americans, were lost when a German U-Boat sank the Lusitania off Ireland's west coast. And in a larger sense, the disaster could be said to have cost thousands of additional casualties in collateral damage: Anguish over the sinking, and anger at German perfidy, eventually helped prod the determinedly neutral President Woodrow Wilson to bring the United States into World War I.

In Dead Wake, the liner's final voyage becomes a tale of two captains. The seasoned 58-year-old Englishman William Thomas Turner faces off with Walther Schwieger, the 32-year-old commander of the German "iron coffin," Unterseeboot-20. Narrative tension increases in alternating chapters, as we see the two vessels drawing close to each other off the coast of Britain, one atop the waves, one beneath.

Larson gives both men their due. Captain Turner, a self-described "old-fashioned sailorman" trained up on square riggers, is taciturn, blunt and fearless. Having already accomplished three voyages on the Lusitania, he is devoted to the safety of his ship, yet can refer to his passengers as "a load of bloody monkeys." Submariner Schwieger comes across as an avid hunter of enemy shipping, but not a monster. He was a man known for his good cheer, equally likely to nurture a litter of dachshund puppies on board his U-boat as to torpedo a hospital ship. Witnessing the damage he had inflicted on the Lusitania, Schweiger reacted with what sounded like regret. "It was the most terrible sight I have ever seen," he told a friend.

As in his previous work, Larson proves himself a consummate researcher. He draws upon telegrams, war logs, love letters and survivor depositions to provide the intriguing details, things I didn't know I wanted to know. These ranged from the innards of a submarine ("an array of pipes and cables as densely packed as the tendons in a human leg") to the jacket cuffs of Captain Turner's uniform, trimmed in "gold wire lace 1/2-inch wide" and the color of the curtains in ship's library, "a pinkish hue called Rose du Barry." Then there's the terrible fact that a single open porthole admits water at a rate of 3.75 tons a minute. And the phrase "dead wake" is maritime vernacular for the flat track of a torpedo over open sea.

Larson also reveals in intimate detail the lives of passengers in the days before the final reckoning, as they went about their casual promenading and shuffleboard. Most were too busy to notice an ad the German Embassy placed on the shipping pages of various newspapers the very day of the launch, warning that all those who crossed in vessels flying the flag of Great Britain would "do so at their own risk."

The hubristic officials at Cunard bragged that the Lusitania was "too fast for any submarine. No German war vessel can get her or near her." Captain Turner himself laughed off the likelihood of a torpedo attack. Passengers had the mistaken impression that ships of the Royal Navy would escort the Lusitania through the war zone — and meanwhile First Lord of the Admiralty Winston Churchill's ultra-secret spy group was actually tracking the U-20. Larson interweaves all these different elements expertly, to explain how the unthinkable became reality on an otherwise gorgeous spring afternoon.

In a note to the reader, Larson says he wanted to "allow readers to experience [the sinking] as did people who lived through it at the time." I would of course never want to experience first-hand what it was like to be in the water off the coast of Ireland on May 7, 1915, with the bow of the gigantic vessel fast disappearing beneath the surface (it took all of 18 minutes). But I am very glad to imagine the scene, thanks to Erik Larson's thrilling, dramatic and powerful Dead Wake.

Jean Zimmerman's latest novel, Savage Girl, will be out in paperback in April. She posts daily at Blog Cabin.