Accessibility links
The Numbers Add Up To This: Less And Less Opportunity For Poor Kids A new book and study both show that the ability to rise from poverty to the middle class truly is shrinking. A child without married, educated parents starts life at a huge and worsening disadvantage.

The Numbers Add Up To This: Less And Less Opportunity For Poor Kids

The Numbers Add Up To This: Less And Less Opportunity For Poor Kids 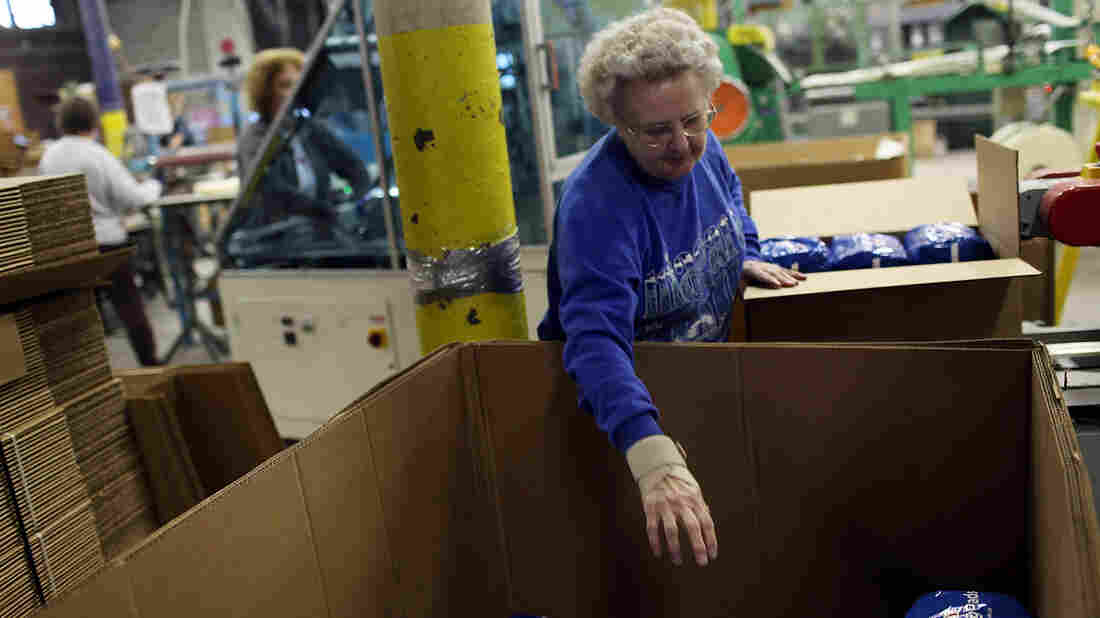 An employee at the American Disposables Inc. factory works on the assembly line in October 2009 in Ware, Mass. The state has seen rapidly expanding income disparity in the past 50 years as highly educated tech and financial workers have seen big gains and inflation-adjusted income has shrunk for the poorest residents. Spencer Platt/Getty Images hide caption 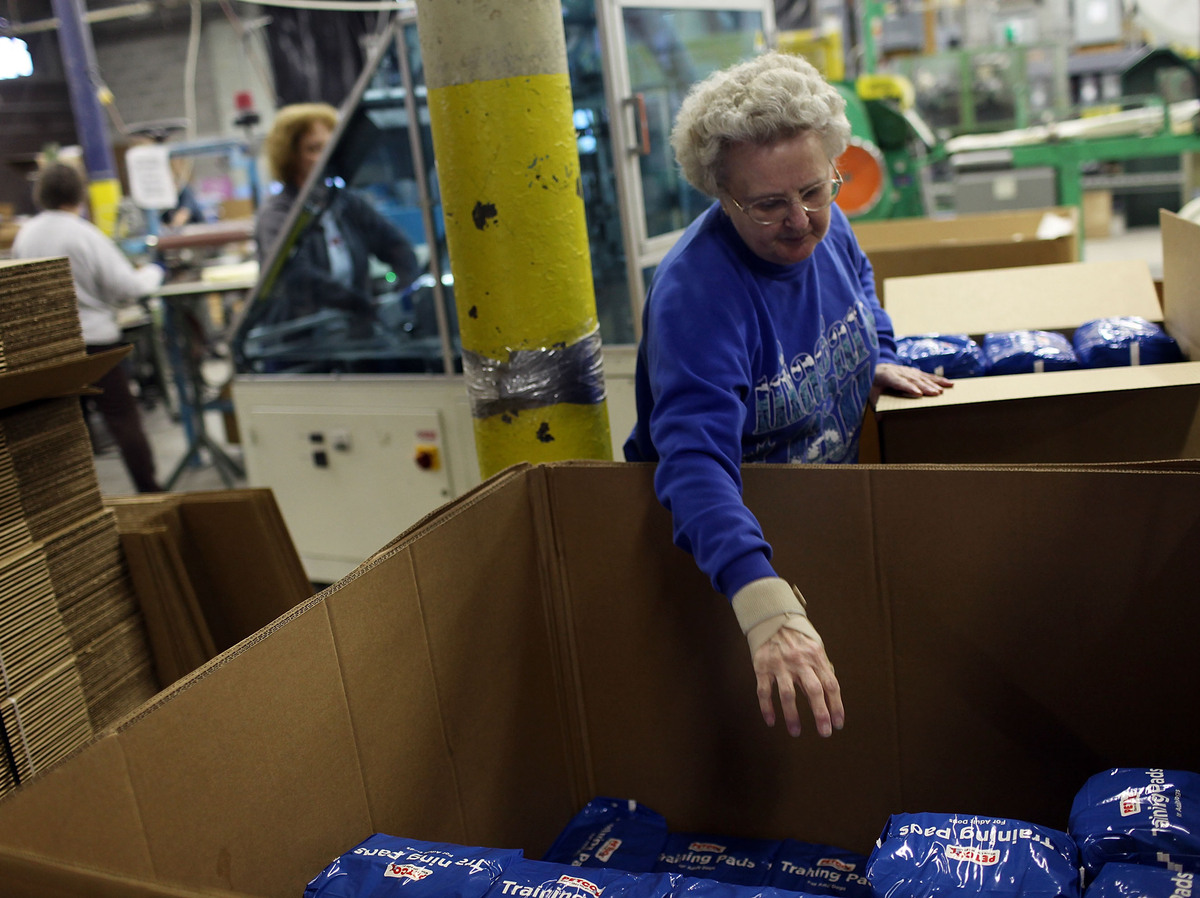 An employee at the American Disposables Inc. factory works on the assembly line in October 2009 in Ware, Mass. The state has seen rapidly expanding income disparity in the past 50 years as highly educated tech and financial workers have seen big gains and inflation-adjusted income has shrunk for the poorest residents.

In this country, all children are supposed to have a shot at success — a chance to jump "from rags to riches" in one generation.

Even if riches remain out of reach, then the belief has been that every hard-working American should be able to go from poverty to the middle class.

On Tuesday, a book and a separate study are being released — both turning up evidence that the one-generation leap is getting harder to accomplish in an economy so tied to education, technological know-how and networking.

Harvard political scientist Robert Putnam's new book, Our Kids: The American Dream in Crisis, argues that the United States is losing its status as a land of opportunity for all.

Here's the central idea: In the American Dream, upward mobility is available to all, limited only by ability and effort, not class. But Putnam assembles data to show that an "opportunity gap" has emerged here, making an upward climb much tougher in the 21st century, compared with the mid-20th century.

Putnam says a child born to married, college-educated parents has a very good chance of enjoying a comfortable life, rooted in formal education and personal connections; a child raised by a lightly educated single parent is starting the economic race wearing concrete shoes. The chances of catching up to the middle class are slim.

40 Years Of Income Inequality In America, In Graphs

A separate study published Tuesday by the Carsey School of Public Policy at the University of New Hampshire uses state-by-state data to underscore the problems. A look through the state slides shows a shifting landscape of opportunities for young people.

The study, which used data stretching back to 1960, shows that the most affluent 20 percent of families have seen their incomes (adjusted for inflation) rise steadily at a high pitch. People who were doing well in the 1960s have watched their children and now grandchildren move up in wealth.

From 1960 to 1970, income was moving up for the poor and middle-income earners as well — but since 1970, those incomes more or less have stalled. As a result, the gap between the affluent and the poor is getting wider each year.

The Carsey study shows those results can be even more exaggerated, depending upon a state's economic drivers.

In more rural Oklahoma, the affluent have gained, too — but at a much more subdued rate, below 50 percent. Meanwhile the poorest Oklahomans have held steady — so the gap is growing, but not as dramatically as in more tech-oriented states.

Those figures underscore the key problem: The U.S. economy is moving more in the direction of Massachusetts, with the better jobs demanding more and more education. The jobs of the future tend to involve very high levels of knowledge of technology, medicine and finance.

To get those jobs, young people need access to college, internships and mentors, according to Putnam, who is well-regarded for his best-seller, Bowling Alone. He spoke with NPR host Scott Simon recently to explain how he studied the economic outcomes of his fellow high school graduates in the class of 1959.

Putnam grew up in Port Clinton, Ohio, about 40 miles east of Toledo. In his class, graduating seniors could choose between college or blue-collar careers in local factories.

"Eighty percent of us did better than our parents in educational and economic terms, and that reflected the American dream," Putnam told Simon.

But he said that on returning to do his research, "I discovered that — like the rest of America — even this little tiny town in Ohio had changed beyond recognition, frankly."

The children and grandchildren of college-educated classmates stayed on the upward swing, while those who chose factory work started sliding as the industrial landscape shifted.

Without steady factory paychecks, "there's such instability in the families of poor kids that 60 to 70 percent of them — of all races — are living in single-parent families," he said, versus 6 percent for the wealthiest fifth of families.

Those kids have fewer adults at the kitchen table, sharing conversation over dinner and pulling together.

If you have two educated parents, "you'll have a larger vocabulary, you'll know more about the world," Putnam said, and such children will have "a lot of adults in their life that are reaching out to help them. They tell them about what it means to go to college."

Putnam, who was awarded the National Humanities Medal in 2012 for his work on big social issues, wants to get people talking about ways to narrow the opportunity gap. The answer, he says, is to get affluent people to realize that to keep the American Dream alive, poorer kids will need extra help.

"They are part of our future," he said.