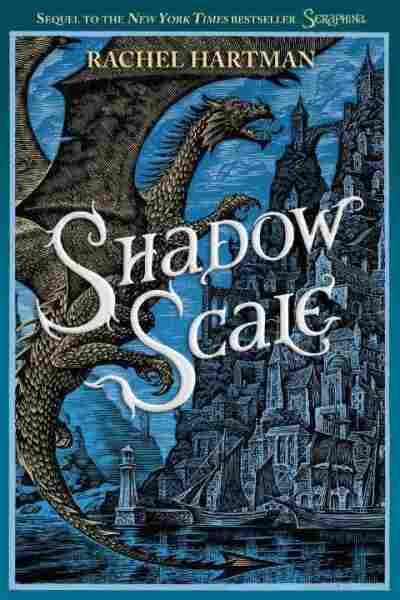 I came late to Seraphina, Rachel Hartman's first book — only discovering that gorgeous story in preparation for reviewing its sequel. I fell deeply in love with it and have been pressing it into people's hands and climbing rooftops to shout about it since: half-human, half-dragon Seraphina and her wonderful voice, by turns wry and vulnerable; the rich, musical world of her country Goredd and its surrounding nations; the brilliantly original dragons and the tensions in their own society and philosophies. It was pitch-perfect, so far as I was concerned — which made me rather nervous about approaching Shadow Scale. Suppose it didn't live up to its predecessor?

It turns out that "living up to it" is the utterly wrong frame for the question. Shadow Scale is less a sequel than it is another stage of development; it outgrows Seraphina and sheds it like a skin. Seraphina was about finding acceptance in a scornful world; Shadow Scale is about self-examination, challenging your own assumptions, discovering all the ways in which you can be unbalanced and changed by new information.

Shadow Scale picks up where Seraphina left off, with the Queendom of Goredd coming to terms with the existence of half-dragons, a civil war among the dragons themselves after an act of betrayal, and the risk of that war spilling across their borders. Forty years of peace have left Goredd's dragon-fighting abilities depleted — but Seraphina and her fellow half-dragons may hold the key to protecting it with their unique abilities.

Shadow Scale exceeds the bounds of Seraphina in several ways: geographically it moves outward beyond the bounds of Goredd, and philosophically it delves deeper into conventional wisdom to find the ways it's anything but. This dazzled me: When so much of the work of a fantasy setting is in establishing how it differs from ours, it's refreshing and exciting to see an author put real effort into showing the tension and diversity that world contains. I loved that it's travel that reveals this: There's absolutely nothing like a journey for unmooring us from our certainties and assumptions, and it was mesmerizing to see Seraphina and her companions experience that unmooring as they travel to the neighboring nations of Ninysh, Samsam and Porphyry in search of more half-dragons.

Without giving too much away, I want to say that this book's villain is one of the most terrifying I've encountered: Genuinely charismatic, ruthless, the kind to slide a knife into your belly while cooing about how much she loves you and wants only the best for you. So many fantasy villains are abstracts, absolutes against which the heroes strive, but the villain here felt jarringly, frighteningly real. She'll make you think of the monsters you know, the people who inspire bewildering love even as they work at destroying everyone around them.

I also loved, with a passion verging on the desperate, the fact that this fantasy world contains people of color, trans characters, gay characters, and languages that acknowledge multiple genders. You'd be forgiven for thinking that the half-dragons of Seraphina are a metaphor for Tolerance and Acceptance, that a reductive allegory is at work, but no, it's so much more than that: Shadow Scale demonstrates that all these other ways of being are present and accounted for in the magnificent tapestry of its world.

Seraphina cast its protagonist into the role of teacher: a young woman caught between worlds and able to explain and understand both while belonging completely to neither. In Shadow Scale, Seraphina's challenge is to understand herself, to question her history, and to grow. It raises the stakes of compassion, understanding, kindness, and goes to some much darker places than Seraphina — but that, too, is a function of its growth. Ultimately Shadow Scale is about the painful truth that sometimes you don't get to keep everything you love; things have to change. And sometimes, the change itself has to be enough.