Accessibility links
A Travel Show For Your Favorite Weird-Museum And Dance Enthusiast Ovation's American Canvas has a lot of fun in San Francisco, starting with the art installation at Alcatraz.

A Travel Show For Your Favorite Weird-Museum And Dance Enthusiast

A Travel Show For Your Favorite Weird-Museum And Dance Enthusiast 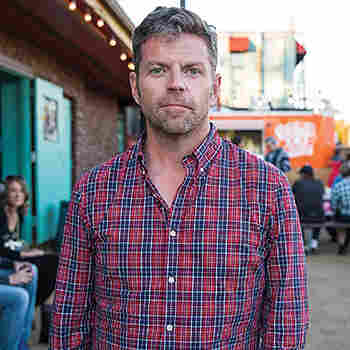 When we get to talking about HBO and Sling, about cord-cutting and the future of television, we tend to focus on the advantages of being able to pick out only the core channels you watch most; the ones you know you love. Now and then, though, I'm glad for the vast array of channels that are trying different things with different people, serving audiences smaller than the ones for football and Cutthroat Kitchen.

Ovation, for instance, makes arts programming — actual arts programming, the way Bravo originally did and the way PBS always has. Their latest show, American Canvas, features writer Dave Holmes* doing quick hits at a variety of arts and culture locations in a given city. In the premiere, airing Wednesday night at 10:00 PM Eastern, he's in San Francisco for the hour.

What they're trying to do, I think, is take a format that's been used a lot — in food shows especially — and adapt it to arts. And despite the fact that Holmes has a great background in writing about pop culture (his series on hit lists of the past, which once lived at Vulture under the title "Somewhere In Time" and now lives at Esquire is a gem), they're taking a pretty artsy view of what it means to talk about art. 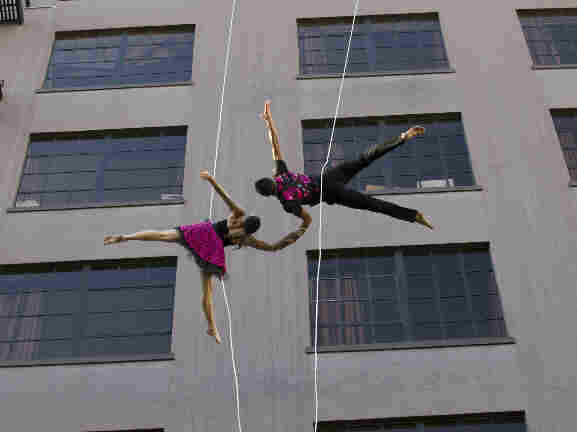 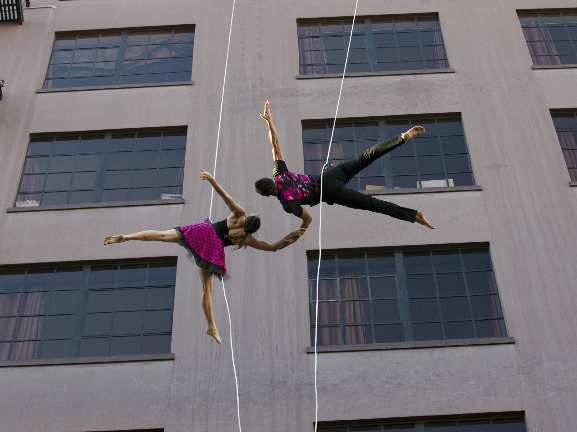 The episode opens with a visit to something I freely admit I didn't know existed: the Ai Weiwei exhibition spread across the grounds of Alcatraz. A park ranger shows Holmes around, and then he wanders through the art installations giving some background and also just ... looking at art. He visits a crab business on Fisherman's Wharf, a dance troupe called Bandaloop that performs on the sides of buildings (it's very cool), some food purveyors and a green tea place in Chinatown, several places important to the history of the Beats, the Conservatory of Flowers, the studio of a visual artist, and a sidewalk setup where he chats with a local author about the history of gay culture and the connection it bears to the Beats.

My favorite, though, is the Musee Mechanique, a collection of coin-operated amusements of all kinds (games, but also other weird displays) run by a guy named Dan, who gets around on roller skates.

They're using a broad definition of arts and culture: food, architecture, dance, visual arts, fiction, social movements, botany — and it's built for the rhythms of basic cable shows, in that it doesn't just sit with one thing for 15 minutes, then have a commercial, then sit with another thing for 15 minutes. You don't have a real shot at experiencing these things fully in this format anyway, so it's probably a good call to skip around so that if you're not into flowers (or dance or how they make fortune cookies), something else comes along pretty quickly.

Outside of PBS, which has certainly valiantly continued to do arts programming of many kinds, finding television shows that would open with a guy basically saying, "Let's take a fun trip, and let's start at this politically motivated art installation because it's cool and interesting" is pretty tough. The format feels familiar, but the efforts to connect elements to each other and the frankness with which the sociology is approached (there are conversations both about the racism that affected Chinese residents of San Francisco and about the secrecy that caused the city's gay culture to initially thrive underground) are refreshing.

American Canvas is a three-part series, scheduled to also visit Austin and Miami. It's not world-changing, but it's a solid effort to put a sense of place around a genuinely varied collection of cultural snapshots. There's certainly validity in the complaints that people are paying for a lot more television than they're using, but I do worry that an a la carte model might cost us fun little shows like this that will perhaps never be hits, but will offer a particular audience something it finds hard to get elsewhere.