Accessibility links
Tituss Burgess: You're Rocking This Thing The co-star of Unbreakable Kimmy Schmidt talks about playing hilarious and bizarre TV characters, then goes back to his Broadway roots to sing a "sedentary" version of a Guys and Dolls classic. 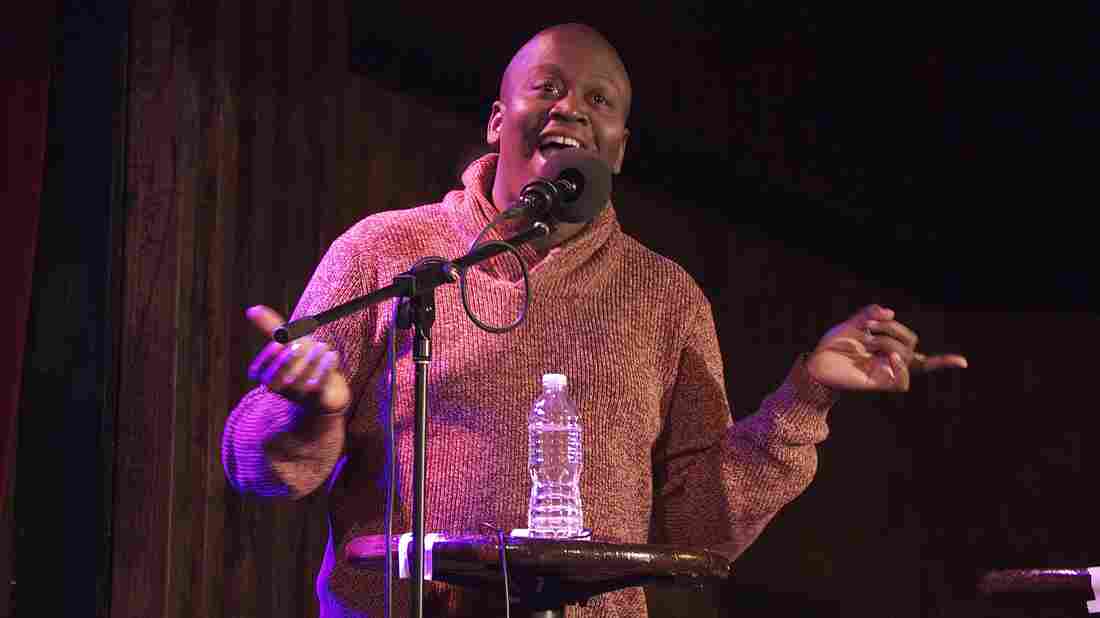 "I auditioned for The Lion King 20 times in 15 years, until they finally told me, 'You are not passing as a straight giraffe.'" - Titus Andromedon, the character Tituss Burgess plays in the show Unbreakable Kimmy Schmidt. Josh Rogosin/NPR hide caption 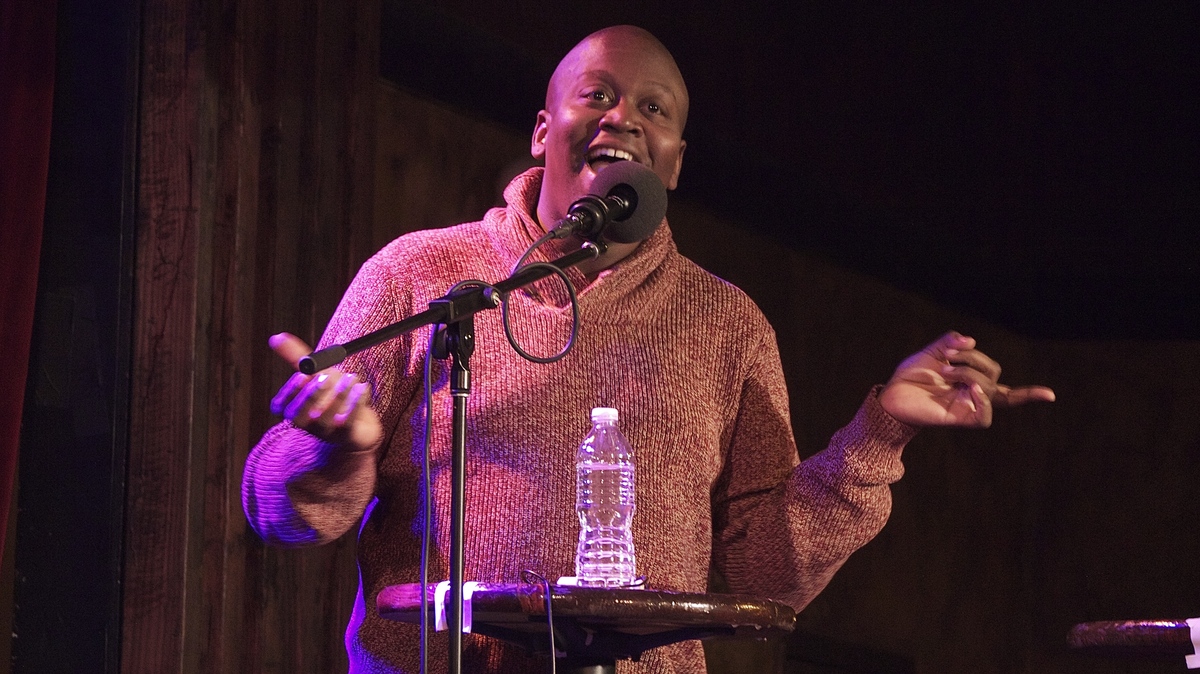 "I auditioned for The Lion King 20 times in 15 years, until they finally told me, 'You are not passing as a straight giraffe.'" - Titus Andromedon, the character Tituss Burgess plays in the show Unbreakable Kimmy Schmidt.

From the big stage to the small screen, Tituss Burgess charms audiences with his wide-ranging singing voice and over-the-top characters, including D'Fwan, the "gay hairdresser and homosexual party planner" from 30 Rock and most recently Tituss Andromedon from Unbreakable Kimmy Schmidt. On the Netflix series co-created by Tina Fey, Burgess plays a beleaguered, aspiring Broadway star and best friend to the title character, who was recently rescued after spending 15 years locked in a bunker by a doomsday cult preacher. The two become unlikely roommates in a basement apartment in Harlem. 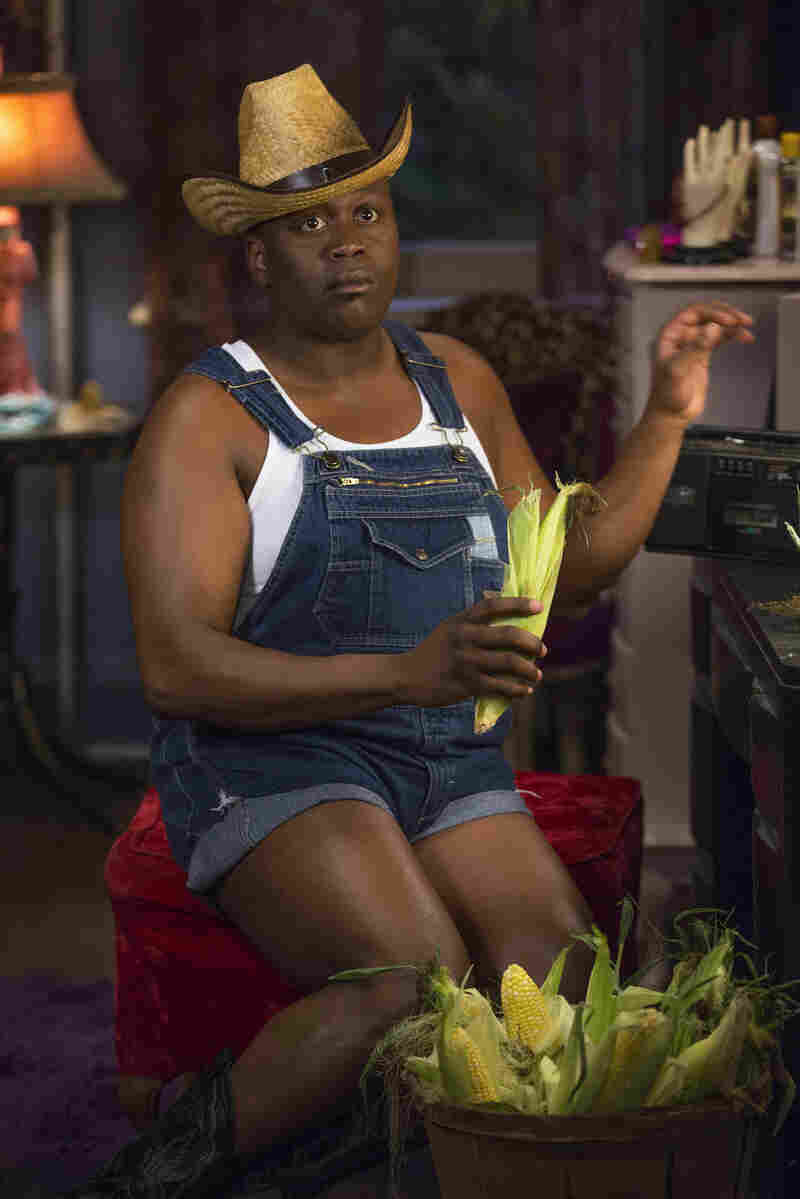 Burgess admitted that there are some parallels between he and Titus, first name and apartment location being the least among them. Like Titus, Burgess tried out many times for The Lion King; he worked at Disney World and would fly back and forth to New York to audition — "and they were not having it."

However, unlike his Unbreakable character, Burgess did find success in Broadway with roles in Jersey Boys, The Little Mermaid and Guys and Dolls. And several years after playing D'Fwan on 30 Rock, Burgess received a character breakdown for the part of Titus, which he said was either "a really cruel joke, or Tina Fey had written something for [him]." Luckily, the latter was true.

Burgess graciously lent his Broadway-ready voice for a Guys and Dolls-inspired musical round called "Sit Down, You're Rocking This Thing," as well as this episode's grand prize: a personalized birthday serenade.

On similarities to his Unbreakable character, Titus Andromedon

My manager sent me the breakdown [of the character]. It said: "Seeking Titus: Broadway wannabe. Broke. Lives in a basement apartment in Harlem." Broke. Lived in a basement apartment. In Harlem. I still do! So much of my personal experience has been creeping up into these scripts that I'm thinking, "Either [Tina Fey] has my apartment tapped, or do I just seem like so desperate that [auditioning for The Lion King 20 times] is something that I would do?"

On auditioning for D'Fwan on 30 Rock

[My audition was called] an "under five,' which is literally under five lines. I had one. And I had a call back. For one line. You literally don't know what you want me to do for one line? You want me to come back and do it again?

What is he going through? All the things. Every emotion possible.

I'm writing a musical...that I will likely star in. I [have a working title that I can't tell you]. I can tell you that it's based on a movie Whitney Houston did, and it's not The Bodyguard.