Accessibility links
There's No Wrong Place To Start Reading Pratchett Terry Pratchett wrote so many books that it can be hard to know where to begin, especially with the lengthy Discworld series. Critic Tasha Robinson says there's really no wrong place to dive in. 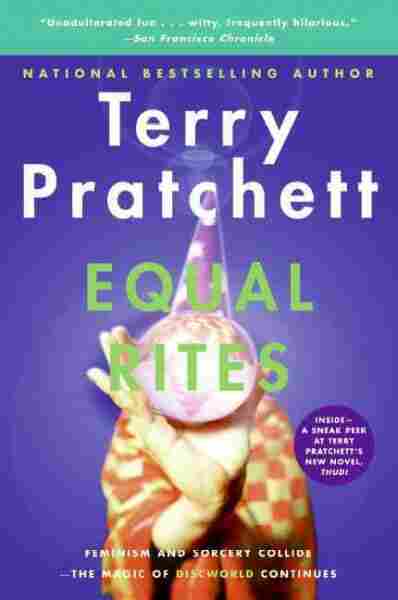 Whenever people talk about Terry Pratchett — as they've been doing a great deal since his death last week at age 66 — someone inevitably asks, "Where should I start reading his work?"

It's a complicated question. Pratchett wrote more than 70 novels, but he was primarily known for the Discworld, a magical-medieval setting he explored across 40 novels and a dozen ancillary books, over the course of more than 30 years. The stories use fantasy tropes to explore real-world issues with a lively, mordant humor, but with plenty of drama and horror as well. All Pratchett fans have their favorites and least-favorites in the series, and the debate can get contentious — or devolve into thoughtful disagreement that leaves newbies looking over dozens of well-justified, conflicting opinions, with no clearer mandate than they had going in.

That lack of consensus can be intimidating to new readers, but at least the fans have good intentions: They're just trying to protect newcomers from possible tripwires. No one wants potential new readers turned off by starting too early in the series, before Pratchett fully found his voice. Or too late, after years of mythology have accumulated. Or with a silly book that doesn't showcase Pratchett's deeper side, or vice versa.

But there's no terrible place to start with the Discworld books, at least for readers who accept one caveat off the bat: No single Discworld novel is fully representative of the others. Pratchett's writing style, interests and humor evolved considerably over decades of work, so the series evolved with him. Some of the books have considerably smaller scopes, and a playful novel like 1990's Moving Pictures, which mashes up Lassie, Fred Astaire and a touch of Lovecraft, is considerably different from 2011's Snuff, which takes a much darker tack on mirroring racism and systemic oppression. Even though the books all take place in the same world, they deal with different characters, in different places, in a constantly changing environment. Asking "Which book will let me know what the series is like?" is akin to asking "What single fruit shall I eat to learn whether I like fruit?"

"Asking 'Which book will let me know what the series is like?' is akin to asking 'What single fruit shall I eat to learn whether I like fruit?'"

Some novels are certainly better entries than others. Pratchett bounced back and forth between a handful of preferred protagonists, and it's easier to begin with the books that introduce them. His 1987 Equal Rites, a wry take on sexism via Discworld's first female wizard, is one terrific launch point. It's the first book featuring acerbic but caring witch Granny Weatherwax, and the first Discworld book to move away from Douglas Adams-style absurdist comedy, and toward establishing a world that reflects our own in pointed ways.

The 1989 film-noir-with-dragons novel Guards! Guards!, the series starting point for sharp, dutiful City Watch head Commander Vimes, is another solid entryway. And 1992's Small Gods and 2003's Monstrous Regiment take place in removed settings and star one-time characters, so they have a lower barrier to entry. Monstrous Regiment, about a young girl going to war disguised as a man, strikes a particularly Pratchettian balance between horror and humor, between familiar fantasy tropes and modern issues like feminism, patriotism and self-control. 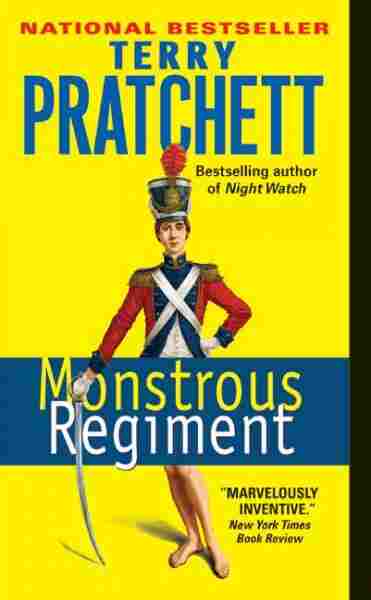 Some of the Discworld books build significantly on each other and are best read in sequence, particularly the three late-series books dealing with semi-reformed con man Moist von Lipwig, whose efforts to shepherd new technologies into the Discworld alter it considerably. Wikipedia has helpful breakdowns that track the story lines and list which primary characters show up in each installment, making it easier to read sub-threads like the Vimes books or the Moist books in order.

But it's important to remember that every Discworld novel has its own standalone, start-to-finish story. They're richer in relation to each other, but they're safe in individual doses. Moist, Granny Weatherwax, Vimes, Rincewind the hapless wizard, Tiffany Aching the apprentice witch, the personification of Death, and many other characters have built long histories over the decades. But they're also designed to be iconic and easily grasped, and each new novel reintroduces them quickly and clearly, often through action.

The Discworld novels are best seen as a continuum, linked more by one man's sensibility than by a crucial timeline. Certain elements visibly extend throughout the series. Pratchett loved wordplay. He brought sharp judgments to bear on selfishness and cruelty. He was fascinated with humanity's talent for self-deception, and generous in assuming we can conquer our worst selves. The books deal with topics as small and specific as postage stamps (Going Postal) and college soccer (Unseen Academicals), and as expansive as the importance of examining our choices and taking responsibility for them. Some readers will prefer one tone or topic over the others, and there's nothing wrong with that.

But one of the major joys of the Discworld is that it runs such a wide gamut. The important thing isn't finding the perfect starting point. It's accepting that Pratchett created a messy, beautiful world that can't be summed up with one individual book — and diving in anyway.

Read an excerpt of Equal Rites

Read an excerpt of Monstrous Regiment