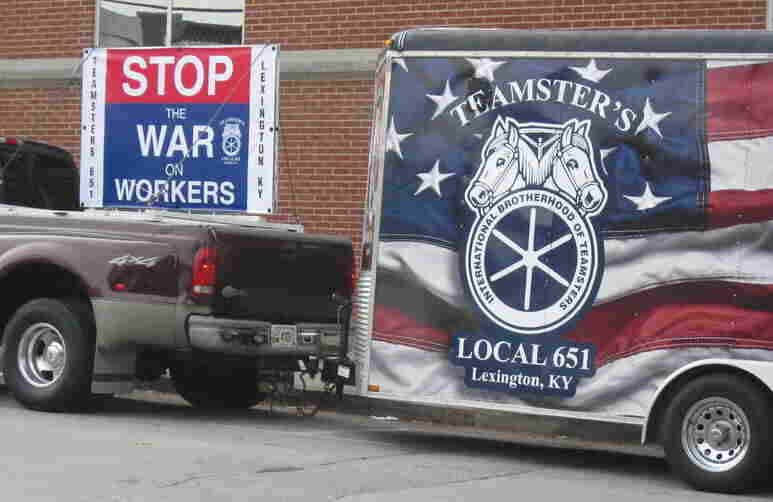 A Teamsters union from Lexington, Ky., was on hand as Warren County became the first county in the U.S. to pass a local right-to-work law. Lisa Autry/WKU Public Radio hide caption 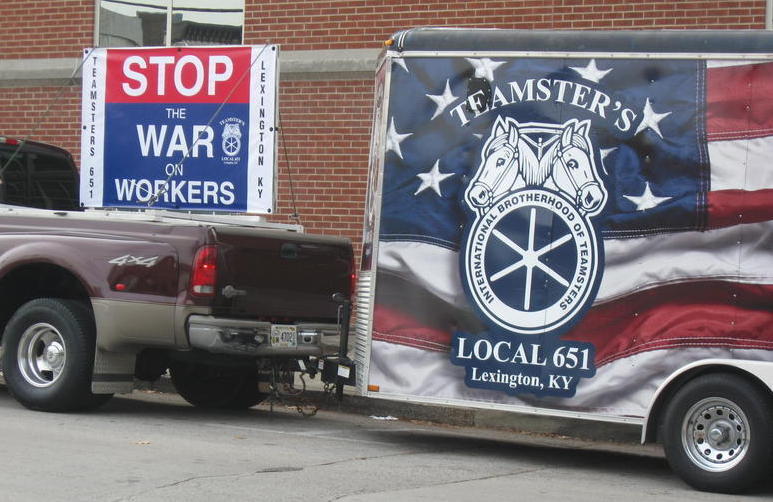 A Teamsters union from Lexington, Ky., was on hand as Warren County became the first county in the U.S. to pass a local right-to-work law.

This past January, the Republican-led Kentucky Senate did what it does just about every year: It passed a statewide right-to-work bill.

Keeping with tradition, when the bill arrived at the Democratic-controlled House, it died.

For decades, Democrats have rejected efforts to allow employees in unionized companies the freedom to choose whether to join a union.

Now, the battle has shifted from the statehouse to individual counties.

In December, Warren County became the first county in the nation to pass a local right-to-work ordinance, according to the National Right to Work Legal Defense Foundation.

County Judge-Executive Mike Buchanon said at the meeting the absence of a right-to-work law has cost jobs.

"I know of one that we lost to Cartersville, Ga., that was a big prospect," he says. "They were coming here and we're getting ready to go to their board of directors to get it approved. And then someone brought up that we weren't right-to-work. We all of a sudden got an email that said 'We're rethinking this now.' "

The Warren County ordinance passed with one dissenting vote. The reason was summed up in two letters: GM.

Warren County is home to a General Motors manufacturing plant — the only one that produces the Corvette. It's a union shop; employees must pay union dues to work there.

"General Motors employs about 800 people and the economic impact is seen throughout the community," says Eldon Renaud, president of the local United Autoworkers Union. "If you can't support the organization that's supporting you, it's gonna fall apart."

He's a huge right-to-work critic and argues these kind of laws are a "race to the bottom."

"Look at those states that are right-to-work," he says. "Look at Mississippi; look at Alabama. I mean, some of the worst education, highest poverty. What happens is that as they reduce the union labor, less and less people are making a decent wage."

Economists also point out that Mississippi and Alabama are not heavily taxed. So there's less money to spend on education and social services.

Eleven Kentucky counties have passed local right-to-work laws since last year, including several along the Tennessee border, which is a right-to-work state.

Jim Waters heads the Bluegrass Institute, a Kentucky-based think tank that advocates for smaller government. He says the state is losing business.

"We're not saying that a right-to-work law is going to fix all of our economic problems in Kentucky, but what we're saying is that it's an important tool in the state's economic toolbox," he says.

Meanwhile, several labor unions — including some from out of state — have filed a federal lawsuit to stop Kentucky's local right-to-work movement.

We would like to clarify several points in a report broadcast and posted online on March 18, 2015 about an effort in Kentucky to pass local "right to work" laws. One line in the story said this about Democrats in the Kentucky Legislature:

More accurately, Democrats have rejected legislative efforts to allow Kentucky to become a "right to work" state. An employee cannot be forced to join a union.

Similarly, it was inaccurate to say that union membership is a requirement to work at the General Motors plant in Bowling Green. The president of the local UAW, Eldon Renaud, told reporter Lisa Autry that the GM plant was a closed shop and later clarified his remarks to say union membership was a requirement after employment. This was an incorrect statement. Employees in unionized companies don't have to join a union, but may be compelled to pay what's called an "agency fee" to cover the cost of bargaining the contract where the employee works.

In addition, this line about income and job growth in certain states needed more context:

We did not identify the source. It is from the Mackinac Center for Public Policy in Michigan. In addition, there's been further debate about that assertion and how much role "right to work" laws have had in wage and job growth. Morning Edition interviewed David Wessel to discuss some of these points. That interview can be heard here.

In previous audio and online versions of this story, we incorrectly said that Warren County's General Motors manufacturing plant is a closed shop, meaning that prospective employees must be union members before they're hired. In fact, it's a union shop, which means that employees must still join the union — but may do so after being hired.