Accessibility links
Record Number Of Starved Sea Lion Pups Straining California Resources An uptick in malnourished pups on the coast has rescue centers struggling to keep up. Changing weather patterns and warmer ocean waters could be to blame, but it's still too early to tell. 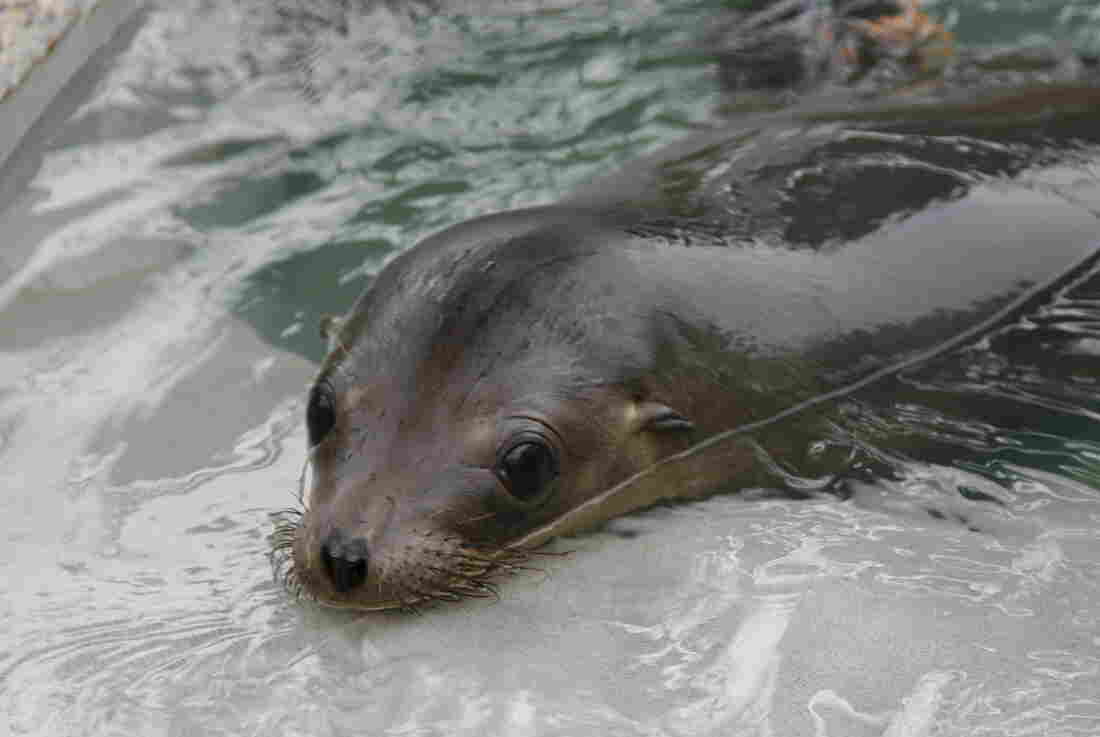 So far this month, more than 330 California sea lions have been admitted to the Marine Mammal Care Center at Fort MacArthur in San Pedro, Calif. Nathan Rott/NPR hide caption 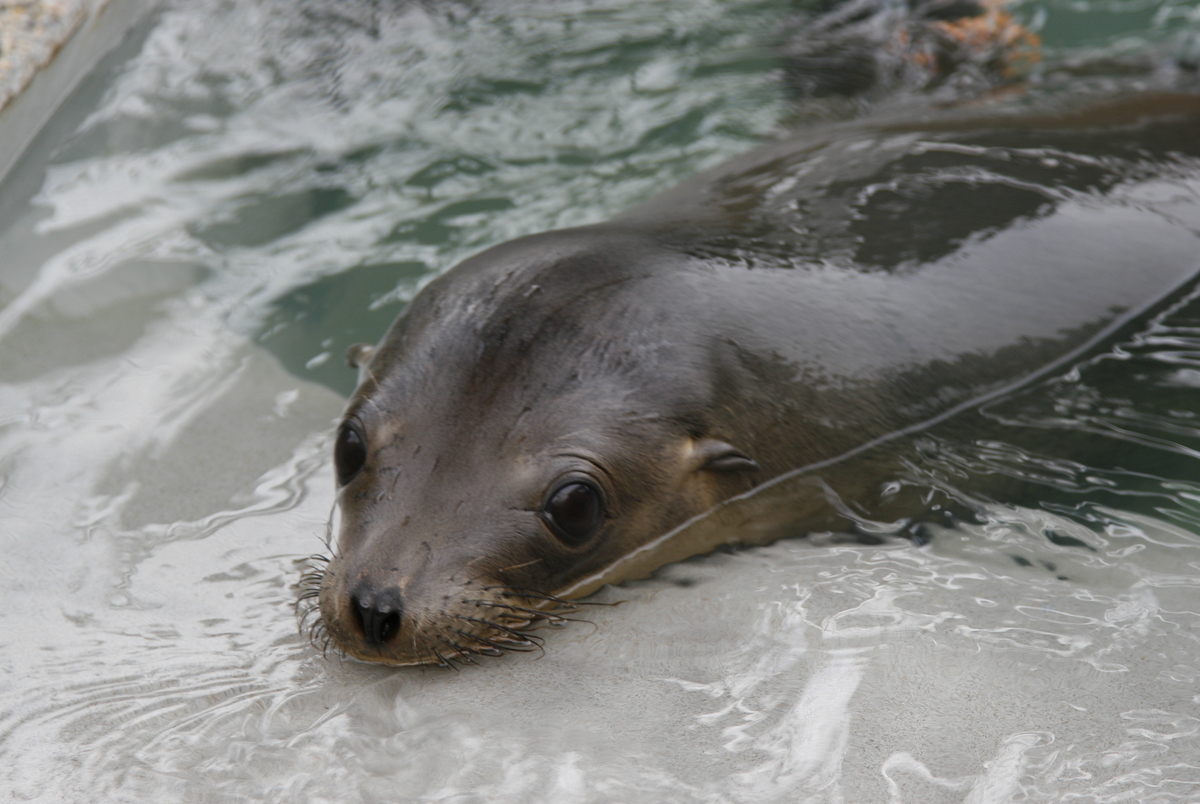 So far this month, more than 330 California sea lions have been admitted to the Marine Mammal Care Center at Fort MacArthur in San Pedro, Calif.

There are more than two dozen pens at the Marine Mammal Care Center in San Pedro, Calif., and no vacancy. They're filled with more than a hundred sea lion pups, grouped by health condition.

The pups in the first row of pens are swimming in small pools and sliding across the wet concrete.

"These guys on this half of the facility are actually doing pretty well," says Lauren Palmer, the chief biologist at the center. "They're eating on their own. They're playing. They're porpoising."

It's a different story a few feet away, where two of the animal rehabilitation center's newest arrivals are lying on top of each other in a dog kennel. The skeletal sea lion pups don't even blink as Palmer kneels beside them.

"These are two that are in fairly critical condition," she says. One of the animals takes a deep breath and its ribs protrude against its patchy fur coat. "Hanging on by a thread," Palmer adds.

Since the start of the year, more than 1,800 sea lion pups have washed up on California's shores from San Diego to San Francisco. They're starving and emaciated, dehydrated and diseased.

It's not uncommon for some sea lion pups to be stranded each spring, as the pups leave their mothers for the first time, but the numbers this year have been overwhelming. Animal rescue and rehabilitation centers like the Marine Mammal Care Center are having a hard time keeping up.

"In March of this year, to date, we've had over 330 California sea lions admitted so far, which is unprecedented," says David Bard, the center's director of operations. "It's up by about four or five times what we usually see."

To put it in perspective, 2013 was another unusually bad year for sea lion pups, with record numbers stranded. California's rescue centers have already responded to more strandings in the first three months of this year than all of 2013.

Bard describes it as a triage situation. "We are having to make some decisions as to which animals have the best chance of survival and focusing on those," he says. Those that don't are being euthanized.

Wildlife biologists and scientists at the National Oceanic and Atmospheric Administration are working to figure why exactly the surge in strandings is happening.

It's a complicated picture, but the general consensus is that ocean waters are warmer than normal, caused in part by a lack of typical strong North winds. The temperature shift is affecting ecosystems and food chains off California's coast, including Southern California's Channel Islands, where many sea lions are born.

"We believe that the warm waters are basically pushing the prey items for the California sea lion mothers further and deeper away from the islands," says Justin Viezbicke, coordinator for NOAA's California Stranding Network.

That's causing mothers to be gone longer than they normally would be. This means often leaving the sea lion pups alone, hungry and eventually, desperate enough to set out on their own even though they aren't physically mature and can't hunt properly.

"When and if they do make it to the mainland, they're showing up in very poor condition," Viezbicke says.

It's important to note that sea lion populations are strong overall, says Nate Mantua, a research scientist at NOAA, based in Santa Cruz, Calif. With a population of about 300,000, the number of dead and dying pups represents less than 1 percent of the total population.

Still, scientists are concerned that the warm waters and lack of winds could persist, prolonging the challenging conditions for sea lions.

Similar events in 2010 and 1998 were caused by warmer-than-normal ocean waters. But in those years, strong El Niño weather patterns were to blame.

"We don't have that this year," Mantua says.

The weather patterns this year and last are far more complicated. There's a weak, tropical El Niño, Mantua says. A persistent ridge of high pressure has been lingering over the West, causing the dry, hot conditions that are contributing to California, Nevada and Oregon's drought, and the record snowfall and cold in the East. Some scientists believe that atmospheric and oceanic pressure gradients are changing as the Earth's poles warm.

Mantua says he doesn't think the unusual patterns represent a new normal. They could just be anomalies. It's just too early to tell.

"We are in an era of really remarkable, rapid change in stuff that's really important for the climate system," Mantua says.

Back at the Marine Mammal Care Center, sea lion pups are barking and moving around excitedly. It's feeding time.

In one pen, volunteers throw whole sardines to a few plumper pups.

"These guys have just transitioned recently from being tube-fed to eating on their own," Palmer says. Some of the pups struggle to get the fish down. One just lies there and sucks on a fish's scales.

In another pen, volunteers and workers for the center isolate a skinny pup and gently hold it to the ground. A worker slides a tube down the pup's throat and slowly pushes a puree of raw fish, vitamins, electrolytes and soy protein — gruel, as the workers call it — into the animal's stomach. 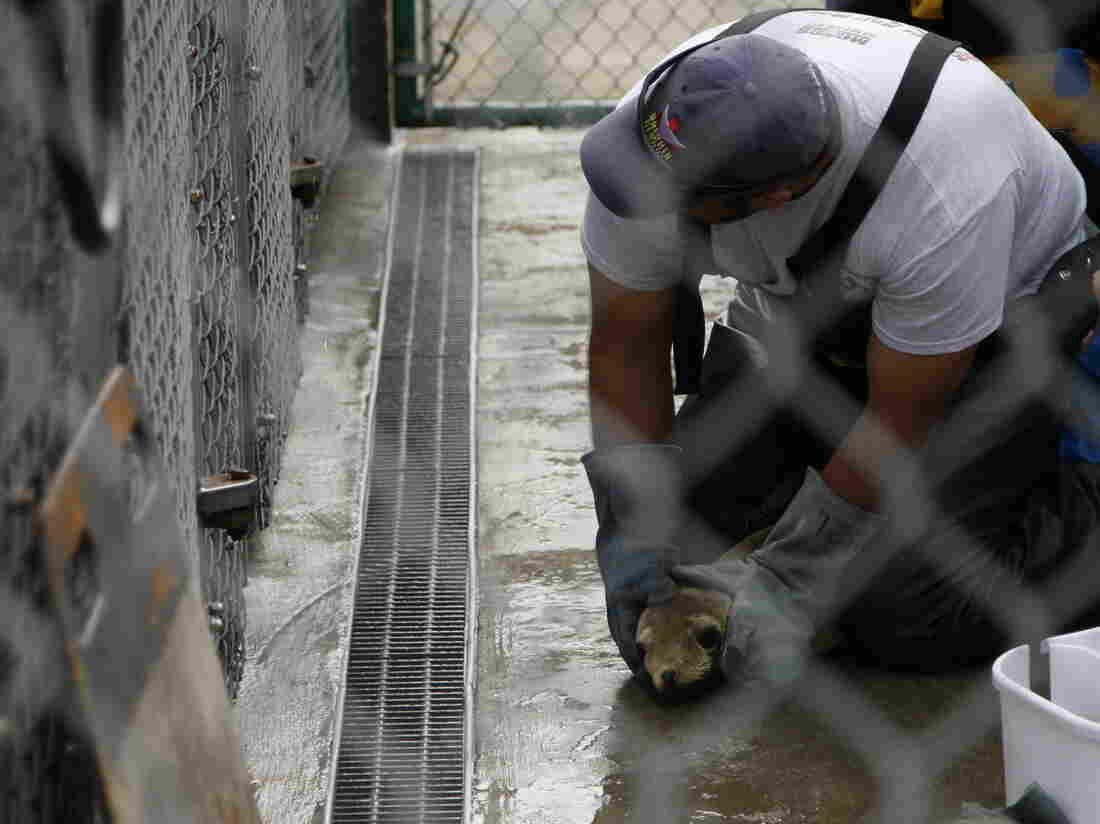 When pups can't eat on their own, volunteers hold the sea lions down and tube feed them a puree of raw fish, electrolytes, vitamins and protein. Nathan Rott/NPR hide caption 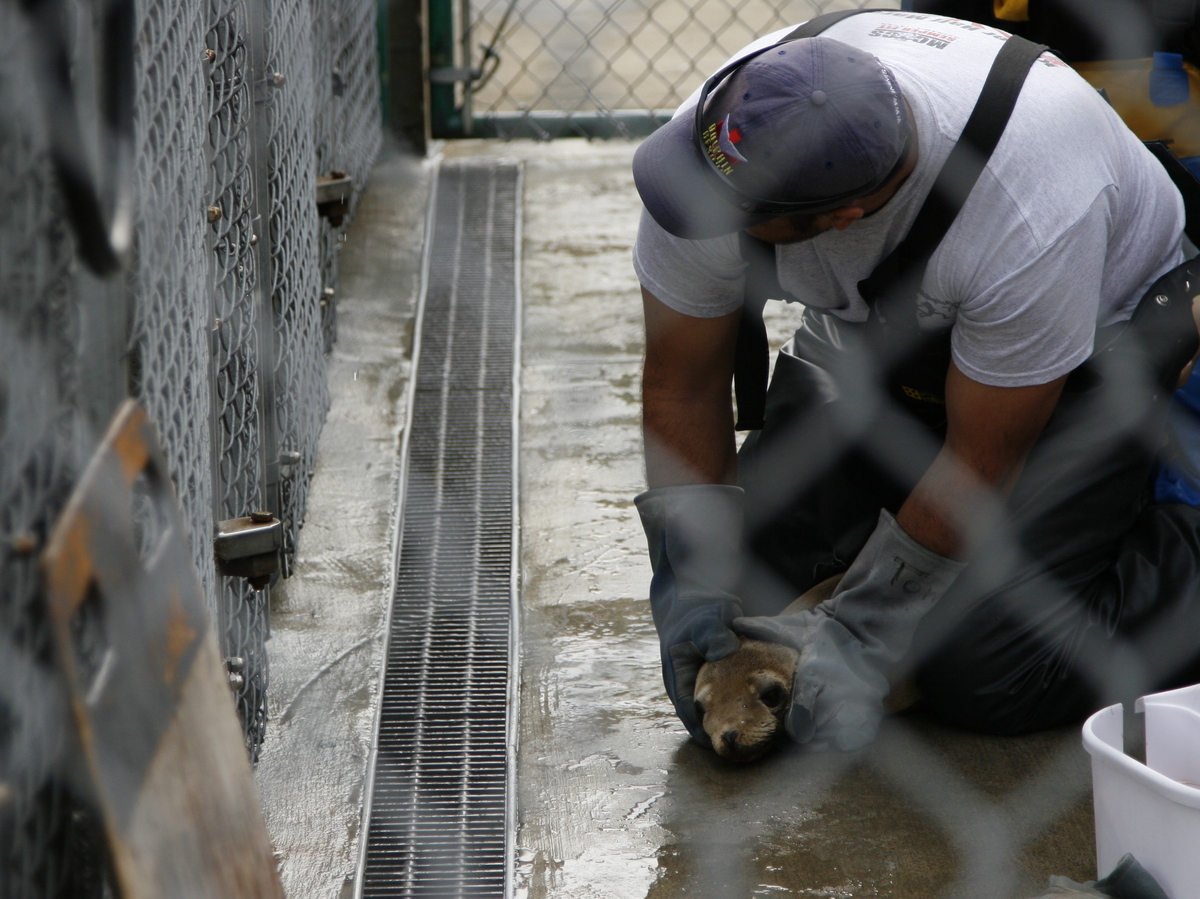 When pups can't eat on their own, volunteers hold the sea lions down and tube feed them a puree of raw fish, electrolytes, vitamins and protein.

Palmer watches with tired eyes. She hasn't had a day off since the start of the year.

She, like the rest of the workers here, hopes that this isn't the new normal.

"If this is the new normal, then we have a real problem on our hands," she says. "A bigger problem. An ecosystem problem. Not just one individual starving animal."