Accessibility links
Detroit's 'Frida' Aims To Build Latino Audiences For Opera The opera, based on the tumultuous lives of painters Frida Kahlo and Diego Rivera, coincides with a new exhibition at the Detroit Institute of Arts devoted to the year they lived in the city. 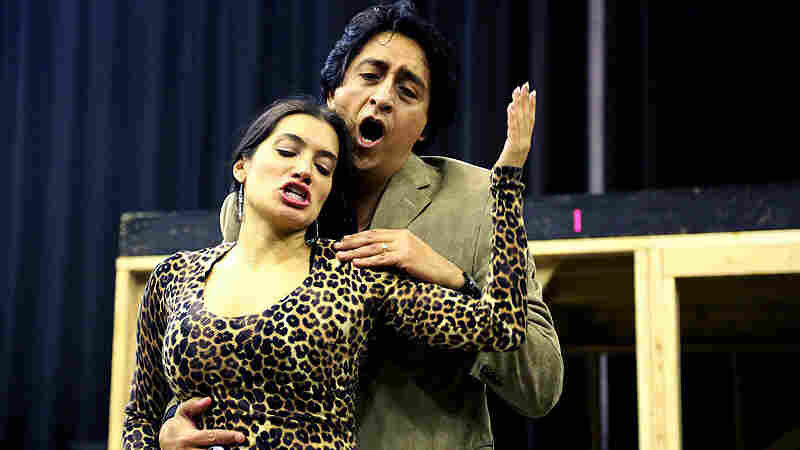 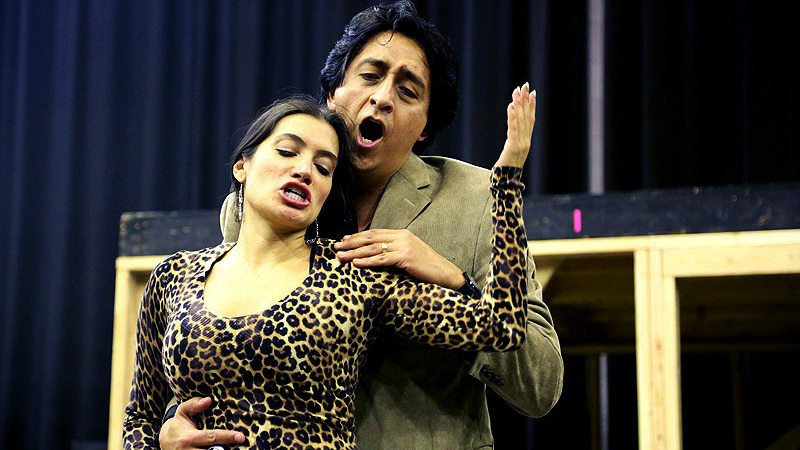 A few months ago, inside her stall in a Mexico City market, Ofelia Contreras showed Monika Essen the intricate handwork on an indigenous Mexican skirt. She pointed out how many months it took to complete the patterns by hand.

Essen is the costume designer for the Michigan Opera Theatre's revival of the opera Frida, and came to Mexico City to get the look of the opera right, since Kahlo was so particular about her traditional wardrobe.

In Detroit's Rivera And Kahlo Exhibit, A Portrait Of A Resilient City

"To really get the authentic quality that I think that we're looking for, for this production, I think it was imperative for me to come here and to actually get a sense of who Frida was, where she lived," Essen said.

But in 1932, Kahlo and her husband Diego Rivera also lived in Detroit — where the current revival of the production overlaps with an exhibition at the Detroit Institute of Arts, Diego Rivera and Frida Kahlo in Detroit.

To showcase the opera to a larger audience, excerpts will be performed for free outside the Detroit Opera House. Wayne Brown, the Michigan Opera Theatre's president and CEO, says it's important to show that opera isn't just a black-tie affair.

"Clearly, Frida Kahlo would have been very upset if everyone showed up in mink coats," Brown says.

So Frida is also being performed at venues throughout the city and southeast Michigan to attract young Latinos like Ricardo Barajas, who's seen ads for it on Facebook.

"I love anything that has to do with [a] real-life story that's reflected in Hispanic culture," says Barajas, who has also seen the Rivera murals at the museum. "I don't like just going on with my life and not knowing what my culture is."

Kahlo's own popularity as an artist will also attract audiences, says Colombian soprano Catalina Cuervo, who's playing Frida in the current production.

Yes, this soprano is hot. In a promotional video on the opera's website, Cuervo looks fit and tan and wears a dress with a plunging neckline as she performs a monologue and sings.

At a local bakery in Detroit's Latino neighborhood, shopper Eloisa Perez said opera's boring, but shown some of the video of Cuervo on YouTube, she said with that soprano, men would go.

"Truth is, she sings beautifully. It would be really cool if people would go see it, and I think I'd be one of them," Perez said, in Spanish.

The exhibition at the Detroit Institute of Arts has works by both artists in its collection, including Rivera's acclaimed "Detroit Industry" murals, about the city's manufacturing and its workers. It also has Kahlo's Henry Ford Hospital, a painful oil painting about her miscarriage there.

"The fact that she focused on her own pain and worked her way through it — I think it's really an inspiring story for anyone," says Migdalia Cruz, who wrote the lyrics and monologues for the opera. "If I did justice to how beautiful she made her own pain then I've accomplished something very special in writing the play."

The music for Frida was composed by Robert Xavier Rodriguez in 1991. He says he's especially happy the work is being revived in Detroit now, after the city overcame a difficult bankruptcy without having to break up the Art Institute's collection to pay its bills.

"It's a sign of good times, hopeful times, when the artists are supported and people recognize the beauty and wonder of art," Rodriguez says.

If nothing else, Soprano Catalina Cuervo hopes Latinos will see they can have a good time at an opera.

"This is fun and dramatic and they will love it, they will just be on the edge of their seats," she says. "Just like with the end of any, every telenovela."

After all, opera is often just a telenovela set to music.