Accessibility links
Decades Before YouTube, Video Pioneers Captured Turbulent Era In the pre-digital age, shooting video was unwieldy and expensive. But in the late 1960s, storytellers calling themselves "Videofreex" used the first portable video recorders to film a changing world. 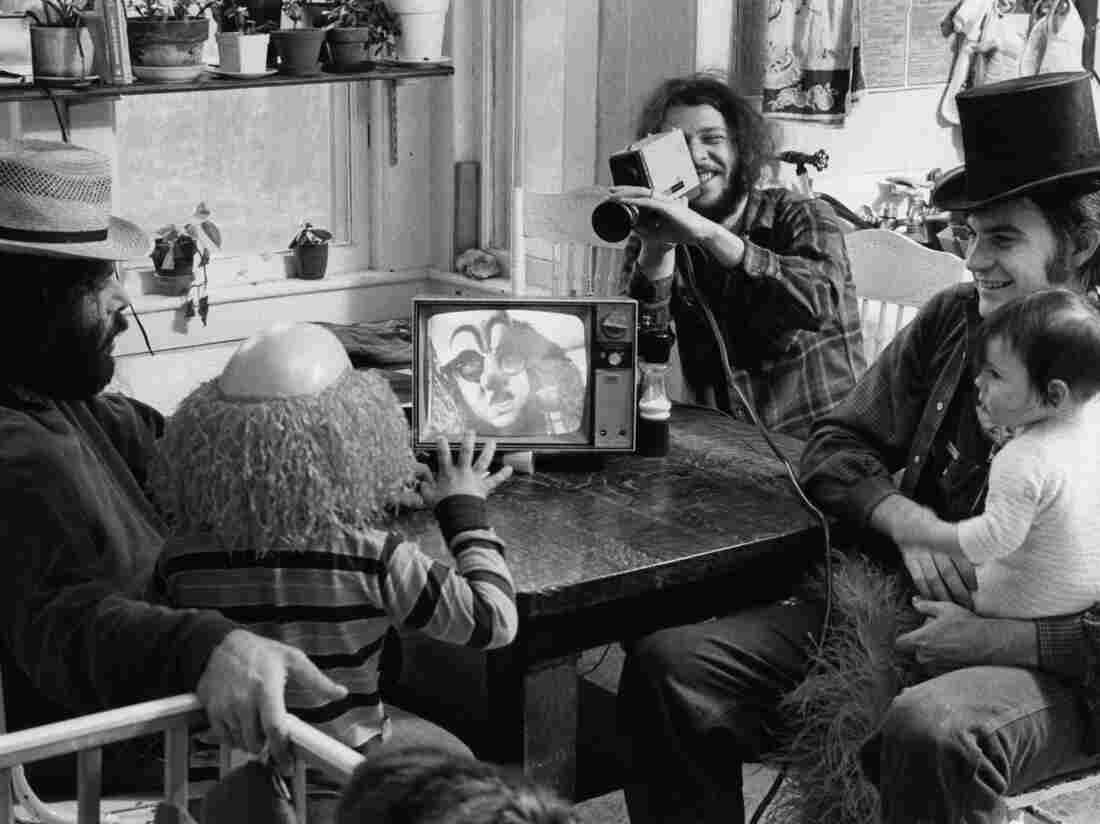 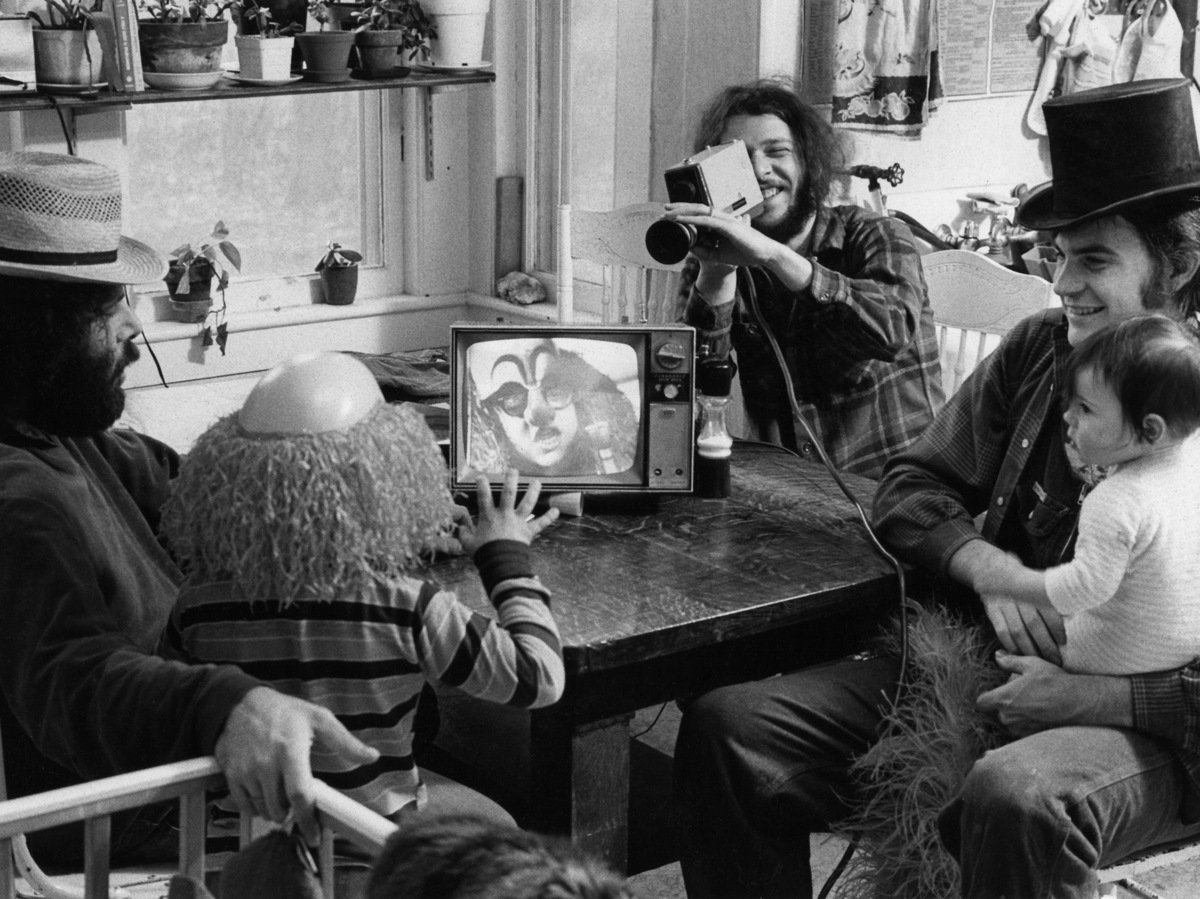 Back in the pre-digital era — when telephones were used for talking, not photographing and filming, and before YouTube came along to broadcast everyone's videos — capturing and disseminating moving images was expensive, time consuming and decidedly non-portable.

But that changed in 1967, when Sony introduced the world's first portable video tape recorder. Before long, enthusiasts formed "media collectives" that captured the social and cultural upheaval of the era. Fueled by a mix of the tunes, the tokes and the times, video became part of the revolution it was documenting.

One of the first media collectives called itself "Videofreex." It's the subject of a documentary and a new exhibition at the Samuel Dorsky Museum of Art at the State University of New York in New Paltz.

Parry Teasdale and David Cort, two of the Videofreex founders, met at the Woodstock music festival, where each had arrived in 1969 with video gear in hand.

"I had some very clunky, old surveillance equipment, really, and he had the first generation of portable video cameras and recorders," says Teasdale. "And so he and I decided to get together." The two agreed to turn their cameras away from the music performers and toward the revelers in the mud.

Teasdale and Cort returned to New York City and moved in together with Cort's girlfriend, Mary Curtis Ratcliff. They adopted the name Videofreex at the suggestion of a neighbor. 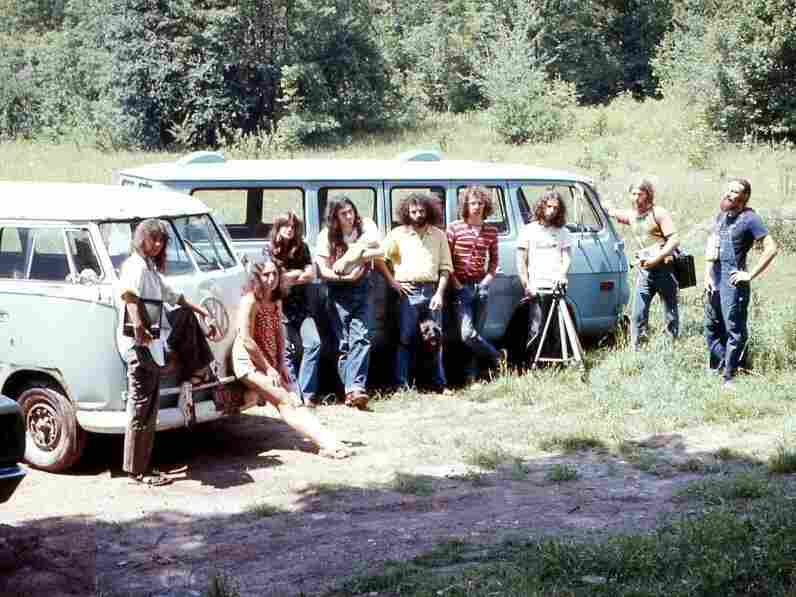 Videofreex including Parry Teasdale and David Cort, fourth and fifth from left, Bart Friedman, third from right, and Skip Blumberg, second from right, gathered in their Catskills town in 1973. Courtesy of Videofreex hide caption 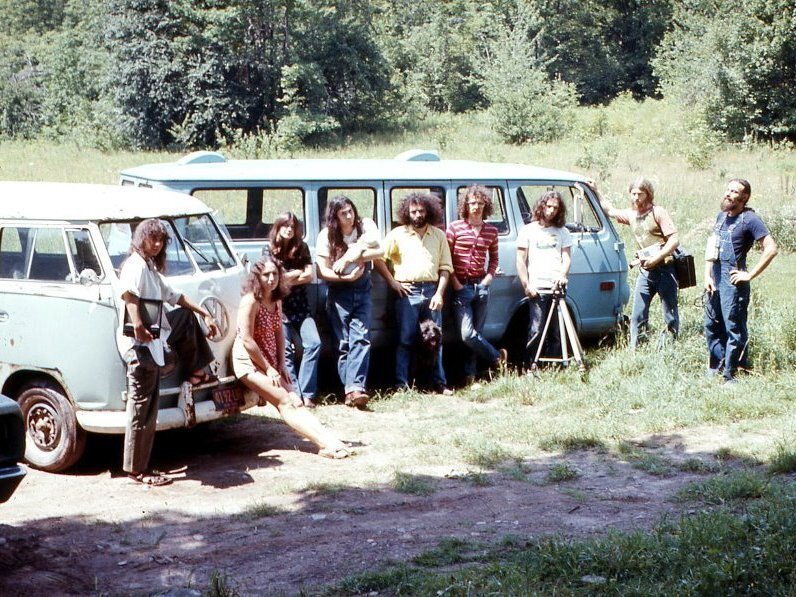 Videofreex including Parry Teasdale and David Cort, fourth and fifth from left, Bart Friedman, third from right, and Skip Blumberg, second from right, gathered in their Catskills town in 1973.

Their work caught the attention of an executive at one of those networks. CBS was cancelling the Smothers Brothers Comedy Hour and wanted to replace it with something more timely and contemporary. Using portable video gear the network bought for them, the Videofreex recorded demonstrations and interviewed counterculture figures, including Abbie Hoffman of the Yippies and Black Panther Fred Hampton, as well as various strangers.

"You know, if we had stopped to think and someone said, 'Do you think they're really gonna go for this?' we probably would've said, 'Well, obviously not,' " Ratcliff recalls. "But we didn't even let that stop us, we just went for it."

The finished program was called Subject to Change and Videofreek Skip Blumberg remembers screening the pilot for a group of "freex" ("We were high," he says), their friends and CBS executives ("They weren't high"). The network declined to pick up the program.

"They sat there evaluating this show, which was kind of a mess, I admit," Blumberg says. "This was, like, so far removed from what CBS was doing. So I was not disappointed that we didn't replace the Smothers Brothers."

Still, the Videofreex got to keep the equipment and continued to show their work in their Manhattan loft on Friday nights. But it wasn't sustainable. Fortunately for them, the New York State Council on the Arts made grants available for video projects outside the city. In 1971, the collective migrated upstate to a huge former boarding house in Lanesville, a small town in the Catskills.

At first, Blumberg recalls, locals were "somewhat suspicious about these long-haired, alternate-culture types living all together in this big house."

"But after a while, because we were providing service to the community by putting people on, covering community events, they began to trust us and became our really good friends," he says. "We were turning on people to video the way people were turning people onto pot. "

In the Catskills, the Videofreex started what may have been the country's first pirate television station, Lanesville TV, using a transmitter bought for them by Abbie Hoffman. Videofreek Bart Friedman remembers it was basically public access TV.

"We got the kids to participate in the kids' programs, we covered stocking of the stream, the firehouse, local residents, car accidents, gun club dinners, things like that," Friedman says. "It was just local television."

They also filmed drama. In one video, a local woman acts out a fantasy of escaping the tedium of small-town life.

"They made hundreds and hundreds of tapes," says Andrew Ingall, the Dorsky museum show's curator. "Some are gems; some are absolute duds."

Ingall says the Videofreex collaborated with and influenced other collectives and producers across the country. One of them was filmmaker DeeDee Halleck, now professor emerita at the University of California, San Diego.

"Their house in the Catskills became a kind of hideaway for a generation of rebels such as me," Halleck says. "I really felt that this was a place that liberated the technology and enabled the kinds of learning, the kinds of self expression that could really make the change. I mean, we were very optimistic."

'Something To Be Learned'

By 1978, the group was out of funds and disbanded. Some members moved back to Manhattan. Some pursued other professions. Others continued to make video.

"I'm not so interested in Videofreex as cave drawings on the wall of video history," says Teasdale, who now publishes a newspaper in upstate New York. "This [exhibition], I hope, can be valuable to people, not because we were such a great success, but because there's something perhaps to be learned about technology and living together and working together. And if that's true, then that will make it all worthwhile."