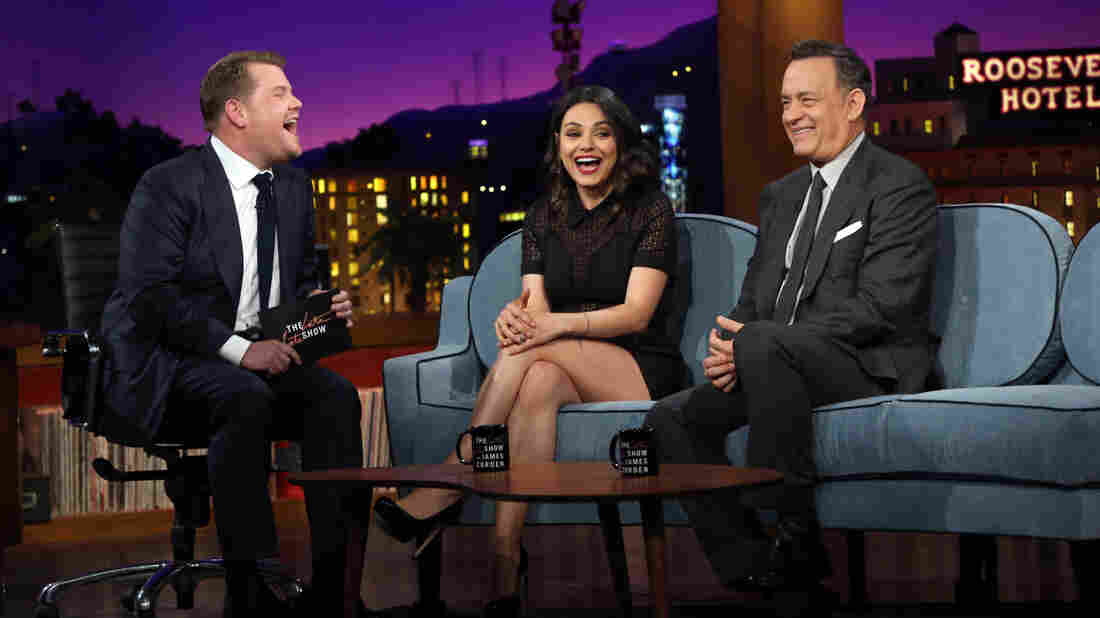 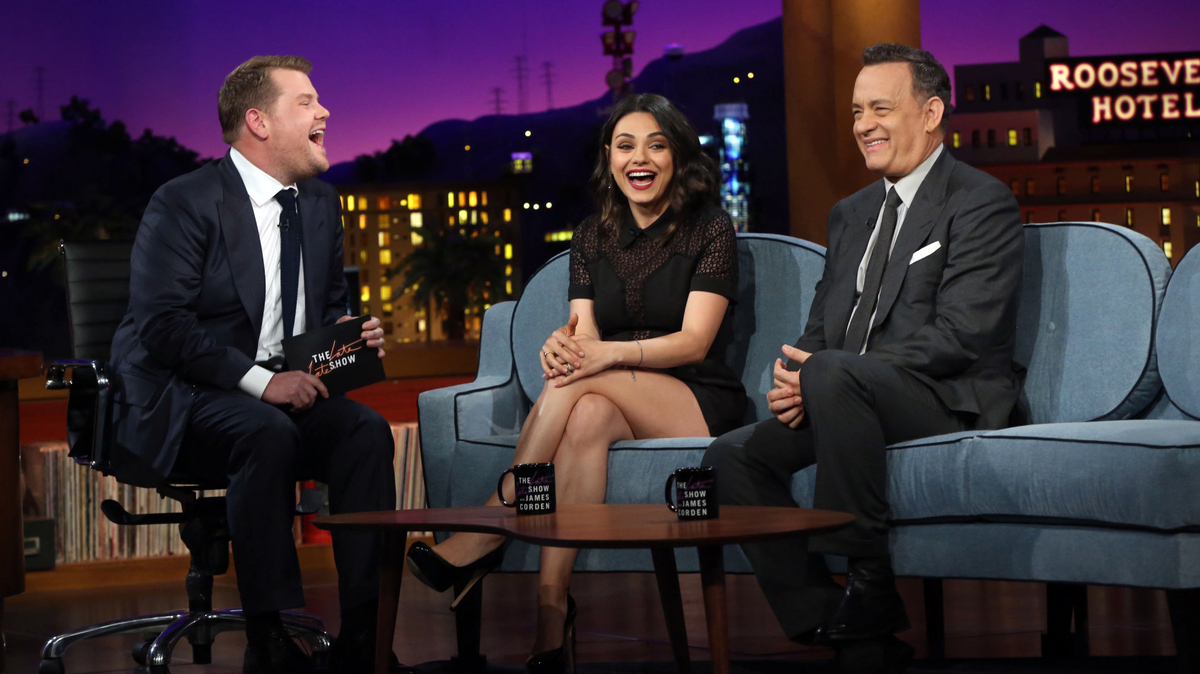 Looks like it took a 36-year-old comic actor from a small British town no one has heard of to bring back the oldest of old-school American TV talk show traditions.

That's how television fans with long memories may feel after watching James Corden's winning debut Monday as the new host of CBS's The Late Late Show — a program once known for its eagerness to dismantle old talk show formulas under previous host Craig Ferguson. 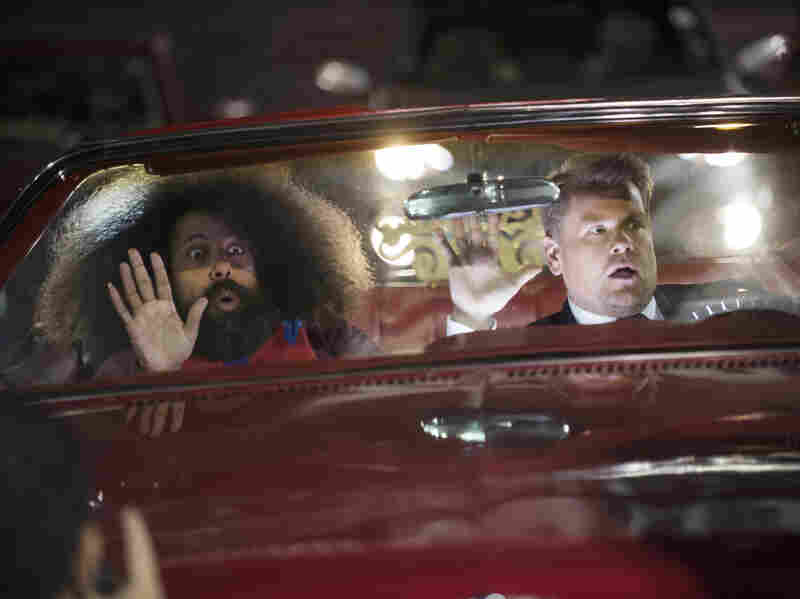 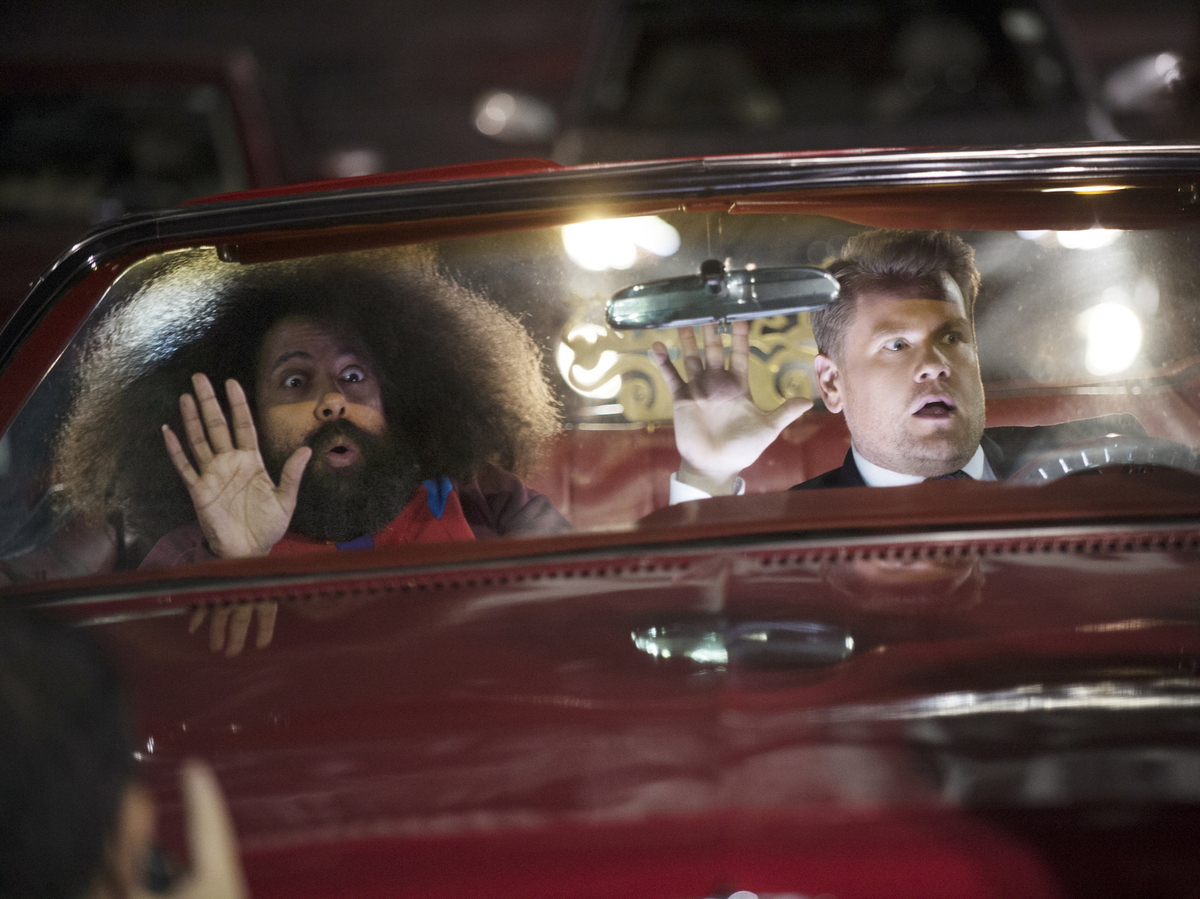 Reggie Watts and Corden tape the opening sequence for The Late Late Show with James Corden.

Instead, Corden pivoted back to stuff we've seen on chat shows since the 1950s: a live band, led by a tuxedo jacket-wearing Reggie Watts; an introduction of celebrity guests as they exit their dressing rooms, bringing everyone out to trade banter at the same time; a skit with guest Tom Hanks featuring the two re-enacting his entire film career in hastily thrown on wigs, beards and makeup; and a pre-taped bit with a cavalcade of stars explaining how he somehow wound up with a U.S. TV show, starring ex-Tonight Show host Jay Leno as an abusive, Whiplash-style mentor.

Stitched together with Corden's considerable charm and gee-whiz sincerity — he repeated in his monologue Monday a line he told me in January, "Believe me, however shocked you are that I am doing this job, you will never be as shocked as I am" — Monday's show was exactly the unexpectedly entertaining romp you would want at the end of a very long broadcast day.

It was also a coming-out of sorts for Corden, a British celebrity whom we Yanks mostly know as the pudgy guy from Into the Woods. But he's also a Tony Award-winning actor who co-created a popular sitcom in England, Gavin & Stacey, and built his fame across the pond in a series of TV jobs that included hosting awards shows and sports talk shows.

The audience didn't get much of that back story Monday from Corden, who nevertheless introduced himself to viewers in the same way Jimmy Fallon did when he took over the Tonight Show. Instead, Corden talked about his wife and young kids, introducing his parents in the audience and joking that his mom liked Los Angeles so much that she was getting a boob job and eating kale.

But in a debut that nodded to talk show tradition, the new Late Late Show also checked all the boxes necessary for success in today's Internet-fueled late-night-TV climate.

The filmed piece with Leno, featuring a who's who of guest stars looking for a Willy Wonka-style golden ticket to host the show, highlighted boldfaced names like Meryl Streep, Chris Rock, Billy Crystal and CBS Chairman Les Moonves. (Am I the only one who thinks Leno is way funnier and more interesting as an ex-Tonight Show host than he was in the actual job?)

That much star power was sure to spark viral video play the next day — as was the bit with Tom Hanks, featuring the two running through the coolest lines from all his movies, whipping on wigs, makeup and, in the case of Castaway, the scraggliest fake beard on late-night TV.

It helps that competitors like Fallon on NBC and Jimmy Kimmel on ABC have shown celebrities how much fun it can be to play on late-night TV. Getting Hanks to plop on a cowboy hat and spout lines from Toy Story has to be easier after President Obama broke the Internet reading Kimmel's mean tweets and slow jamming the news with Fallon.

Speaking of headline-grabbing moments, Corden also pushed guest Mila Kunis to admit she had married longtime boyfriend Ashton Kutcher, in an exchange that felt like something you might see on Graham Norton's British chat show (US Weekly insists the two haven't married and Kunis was just playing along). But Corden was a bit too wired Monday to really put his guests at ease; like many talk show hosts, he may find talking up guests on the couch the most challenging part of the gig.

Corden's Late Late Show debut gave audiences a glimpse of good times to come. Bandleader Watts, one of the most inventive and musical comedic voices from the podcast-turned-TV show Comedy Bang! Bang! mostly showed off his awesome vocal chops on Monday's show, though he did contribute a deliberately awkward Question of the Day for Hanks that felt cribbed from his Bang! Bang! days. I'm hoping he gets a little more space to shine in shows to come.

As I've written before, success in talk show TV-land largely comes down to two things: the format of the show and the way in which the host inhabits that format. Monday's debut showed Corden has a well-tuned format that showcases his charm and talent. He's just got to figure out what he wants to do with it.

It's not the kind of show that will transform late-night TV, at least not yet.

But for the third white guy named James hosting a talk show on network television, it wasn't bad.