Accessibility links
Can Female Marines Carry The Load And Kill The Enemy? Marines have to carry a pack that weights more than 100 pounds. For some of the women training in the Mojave Desert to join combat units, that nearly matches their body weight.

More than a dozen Marines from Alpha Company fan out across California's Mojave Desert, far into the distance. Machine-gun fire gives them cover. The small forms dash ahead. Some drop to one knee, others fall on their stomachs, firing at pop-up targets.

Only one woman is part of this group. Until last fall, Sgt. Kelly Brown was fueling helicopters and trucks. Now she's running with an assault rifle.

"Sgt. Brown. She's a good Marine, she's adapted well," says Capt. Ray Kaster, Alpha Company commander, as he walks up a gravel road toward the training range at a Marine base in Twentynine Palms, Calif.

"She's a natural leader. She's been very good for us. Very good to have a positive influence amongst the females," he says.

But the number of women is dwindling. Kaster estimates he's lost about half of them, though Marine officials later say about one-third of the nearly 30 women dropped out.

Kaster says the majority of those dropouts were due to hip and leg fractures, injuries that come from the heavy load an infantry Marine must carry: weapons, ammunition, a pack that can weigh from 50 pounds to more than 100 pounds.

The Marine Corps is trying to determine whether women can serve in ground combat jobs: artillery, armor and infantry. Alpha Company's training out in the Mojave is part of a months-long experiment to figure that out. 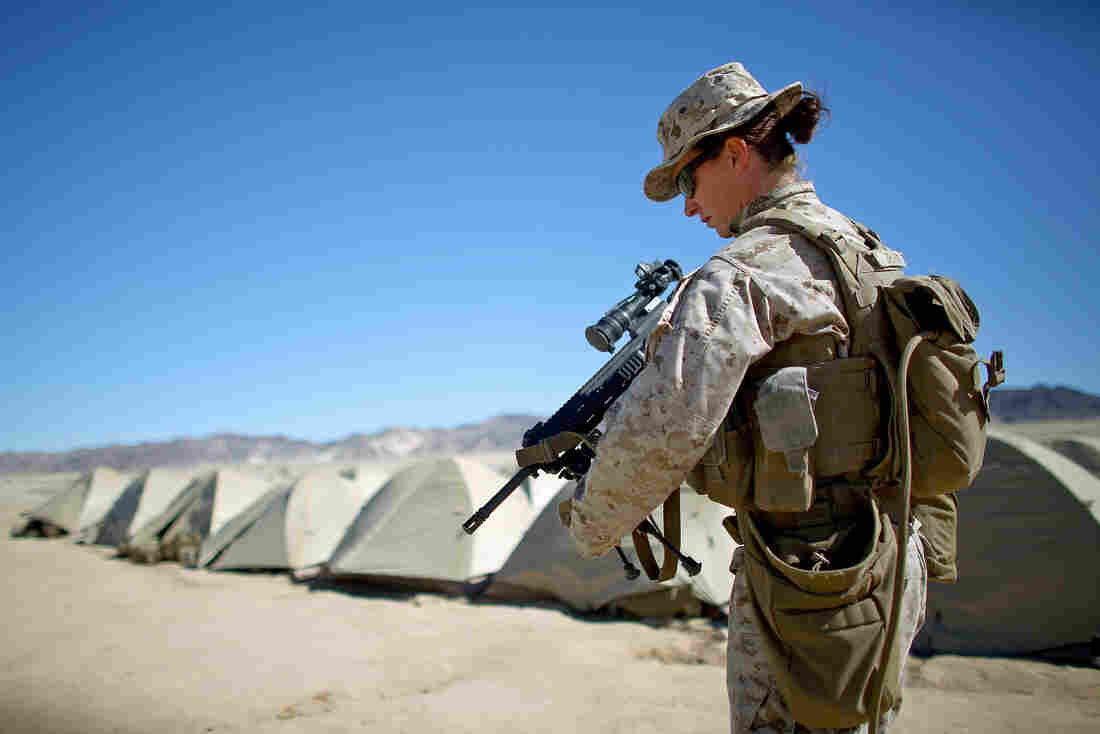 Sgt. Kelly Brown puts her weapon over her shoulder at the Marine base at Twentynine Palms, Calif. David Gilkey/NPR hide caption 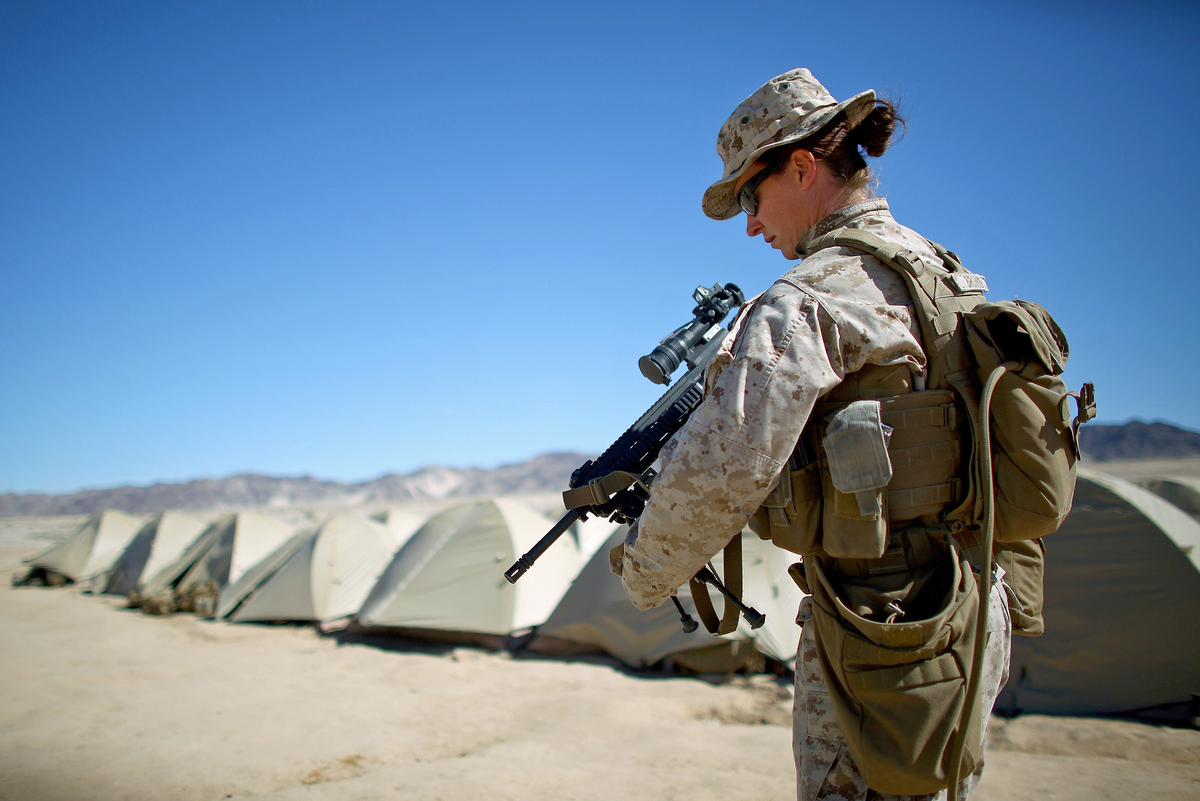 Sgt. Kelly Brown puts her weapon over her shoulder at the Marine base at Twentynine Palms, Calif.

After the exercise ends, Brown unloads her weapon, pulls off her helmet and body armor. She's lean and athletic, and played softball at Virginia Tech.

It was her grandfather's service as a Marine in Korea and Vietnam that inspired her and landed her on this desert range with these male and female volunteers.

"I would say definitely the hiking and being able to carry that amount of weight, because the standard is 114 pounds and that's pretty close to my body weight," she says.

"I'm carrying pretty close to my body weight, but your shoulders get stronger, your back gets stronger," she says.

Brown may be getting stronger, but the load overwhelmed some of the women, she says.

The Marines had no immediate figure for the number of men who dropped out, but say the number is far less.

"Some of the females were great, were doing a great job," Brown says. "It's just some of the stress fractures on the hips."

Brown says female Marines can prevent injuries by shifting the weight of the pack off the hips to the shoulders, and more conditioning.

"Mentally it's just being strong, you just get stronger," she says. "You just push yourself through it, that's what I've been doing."

Abrego is just 5 foot, 1 inch. She left her job as a Marine clerical worker to train for the infantry and, as she puts it, "kick bad guys' butts."

"I've never wanted to quit," she says. "It's like, God this really sucks, but most of the time, I'm still here, I'm still going to do it."

This infantry exercise goes beyond just physical strength. Marines are supposed to fight and win the nation's wars. That's where the targets on this desert range come in.

Brown and the other Marines have sensors on their weapons to determine who hit the targets, which have sensors, too.

Paul Johnson is watching all of this. He's a civilian who designed this and other tests. He monitors the exercise from a small room inside a tower that rises above the range. A computer screen displays the human targets scattered around the range. 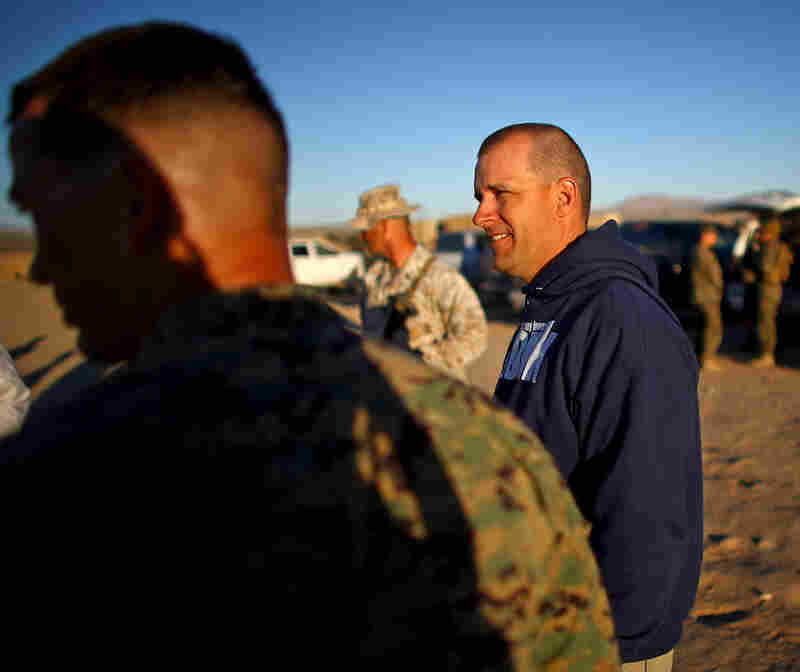 Paul Johnson is a civilian who is monitoring the Marine exercise and collecting data to help the Marines answer the question of whether to open combat jobs to female Marines. David Gilkey/NPR hide caption

Johnson's experiment will show how a Marine attack performs with all men, then with one woman taking part, then two women. The number of women remains low to reflect reality: Women make up just 7 percent of the Marine Corps.

At this point, Johnson says he doesn't know the answer to a key question: How are the women doing at killing the enemy?

At this point, he is looking at the data blind; he doesn't know which squad, or the makeup of the squad.

Johnson will have the results by the summer, when he files a report to the Marine leadership. Based on this and other data, the Marines will have to decide. Do they open up ground combat to women, or ask for an exception?

Kaster, the Alpha Company commander, says the bottom line in all of this is combat effectiveness. Can women Marines carry the load and kill the enemy?

"That's what this [experiment] will show. Is there a difference? Does having a high or low female concentration in an infantry rifle squad, does that inhibit or complement, enhance the ability of that unit to fight?" he says.

Meanwhile, all the Marines, men and women, continue to train in the desert: shooting at targets, digging in defenses, carrying the load.

Up ahead: a nearly five-mile hike with a fairly light pack — about 55 pounds.