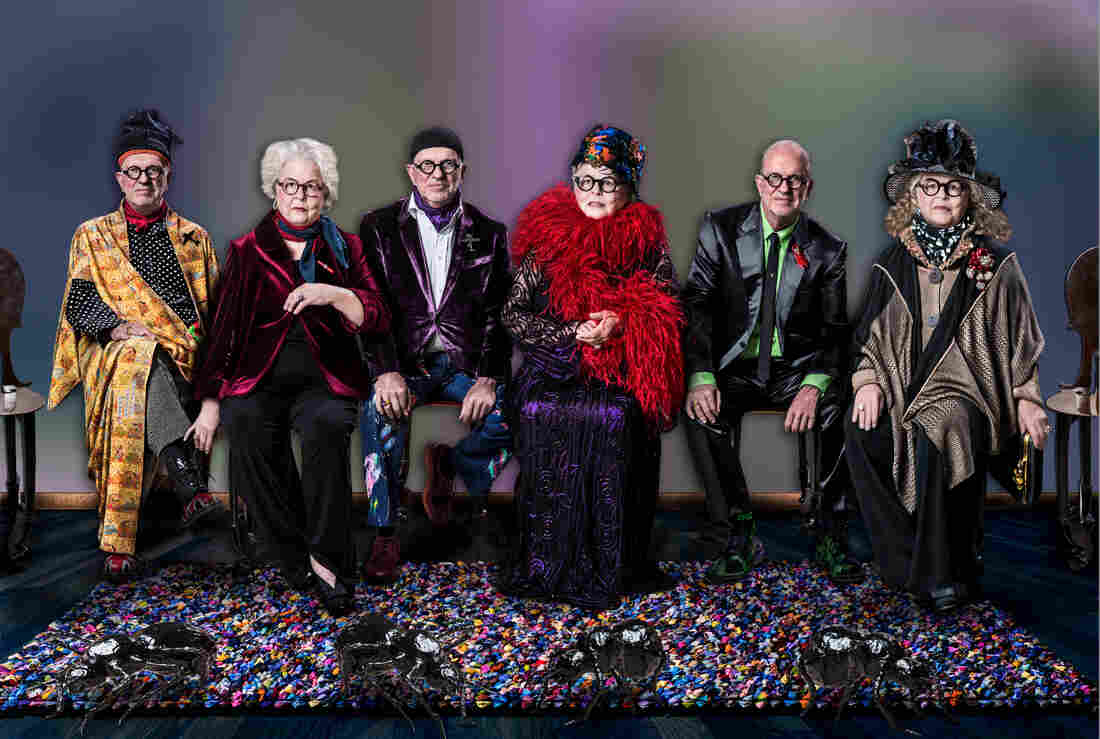 One of Iké Udé's portraits of aviation tycoon Robert Duncan and his wife, Karen, shows the couple in three different outfits, and stretches 6.5 feet by 10 feet. Iké Udé/Courtesy of Robert and Karen Duncan hide caption 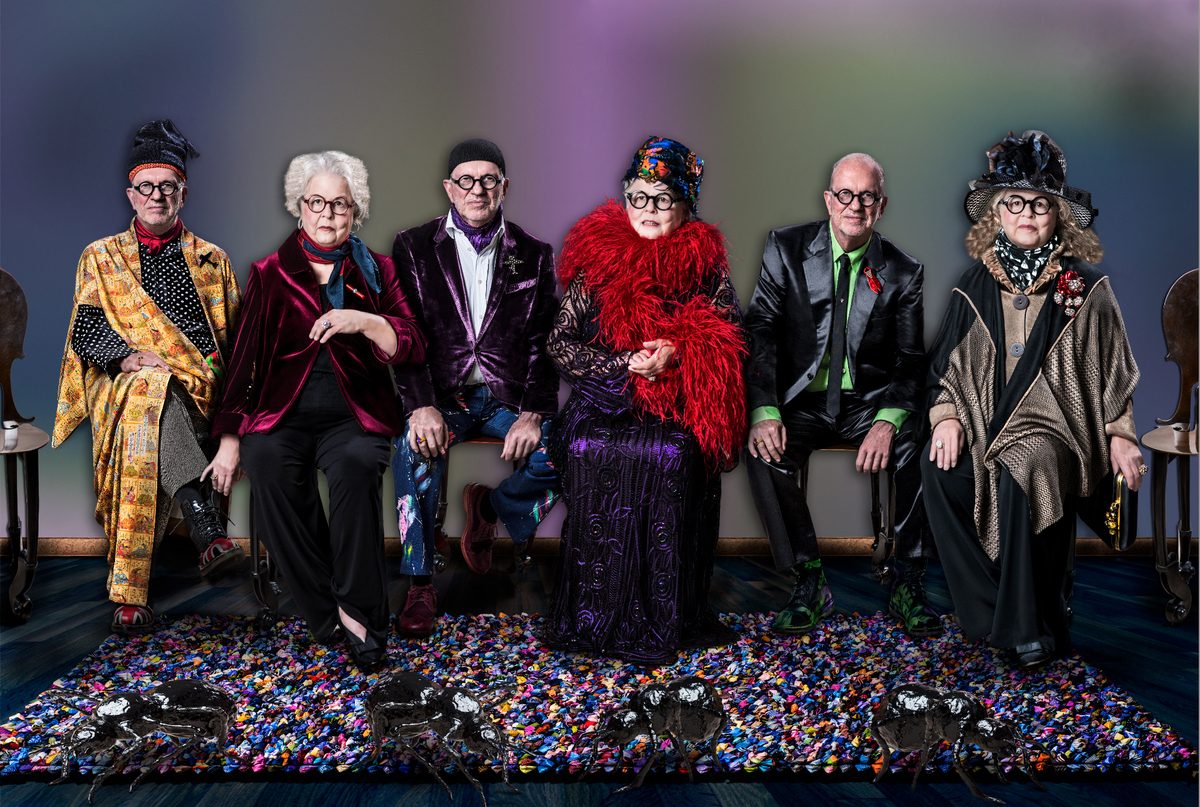 One of Iké Udé's portraits of aviation tycoon Robert Duncan and his wife, Karen, shows the couple in three different outfits, and stretches 6.5 feet by 10 feet.

On a recent night in Lincoln, Neb., aviation tycoon J. Robert Duncan hosted a party for the unveiling of two photographic portraits of him and his wife, Karen, whimsically attired in colorful dress from around the world. Their photographer is the Lagos, Nigeria-born, New York-based artist Iké Udé.

"He develops a fantasy, and he uses all these beautiful costumes and colors and props to convey this fantasy. And that drew me in right away," Duncan says. "I've collected unusual clothes and unusual shoes and hats for years and I pride myself on being different in the way I dress. And this is the ultimate in different dress." 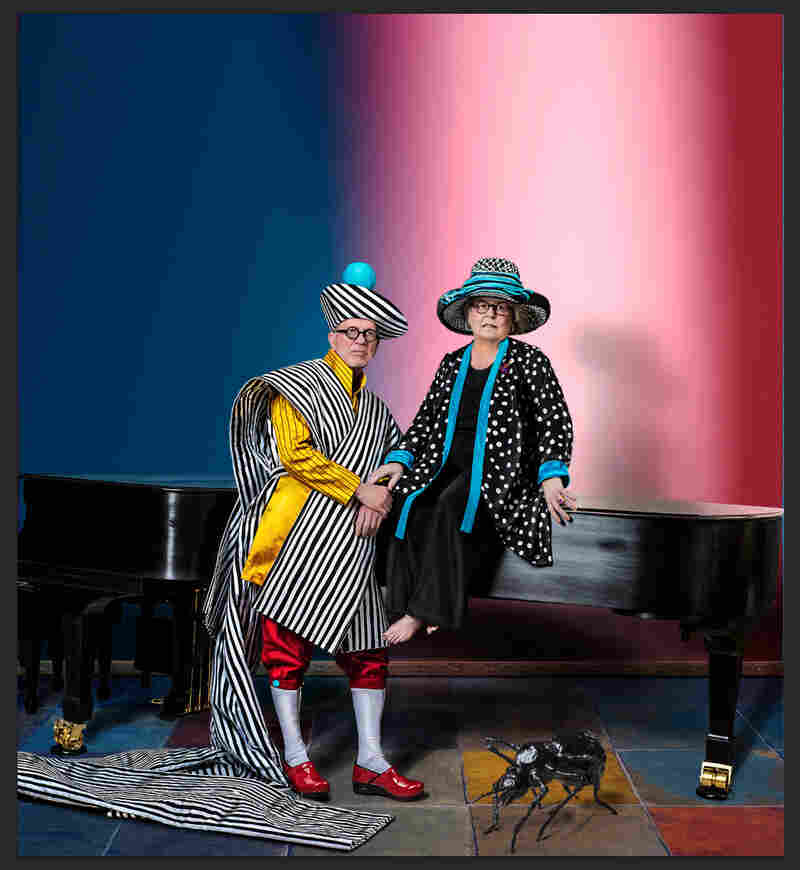 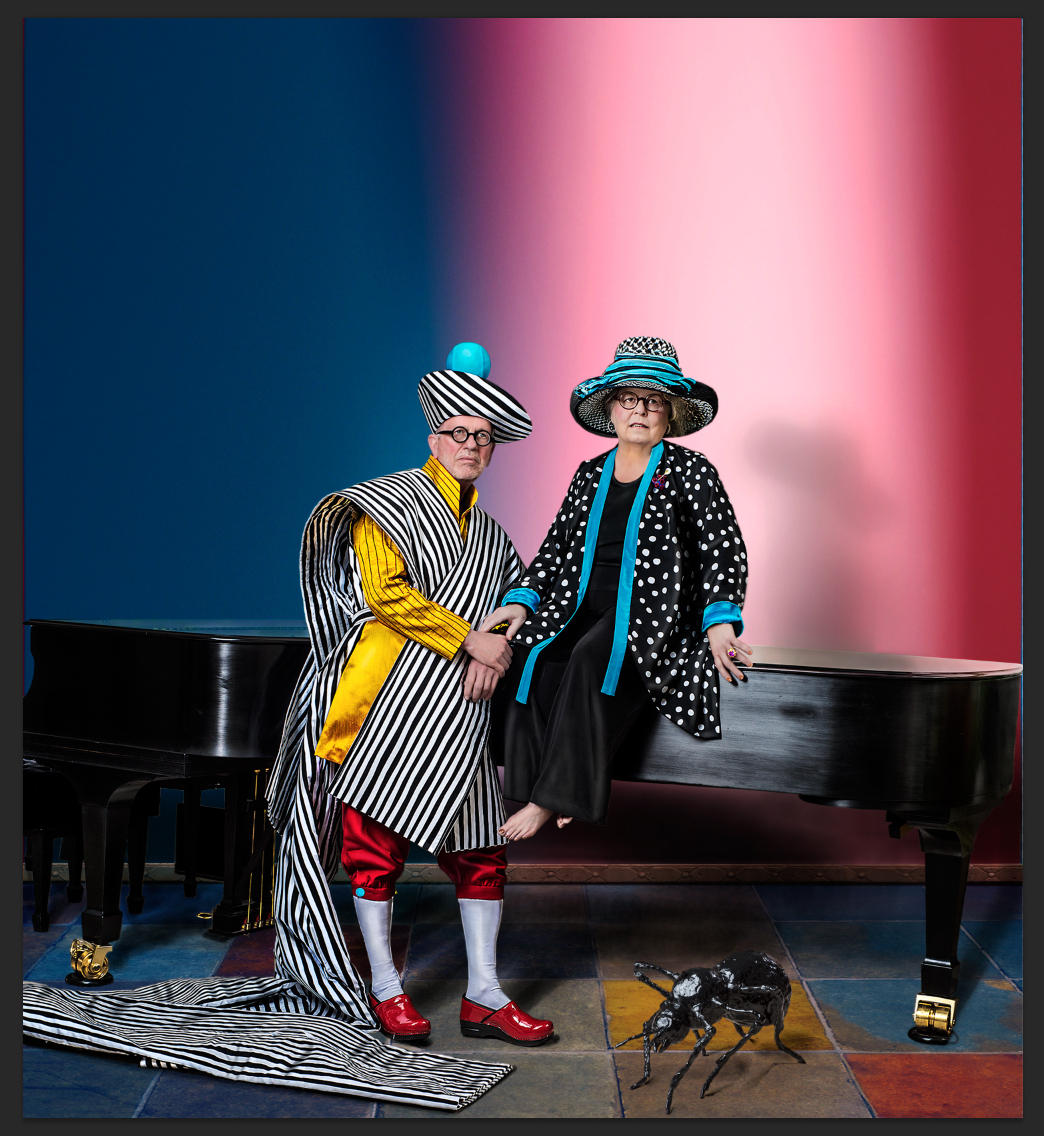 Duncan owns Duncan Aviation, the world's largest family-owned refurbisher of private jets. He loves and collects art, he loves clothes and he even quotes Coco Chanel in his email signature: "In order to be irreplaceable one must always be different."

The two portraits Udé made for the Duncans are bright and color-saturated. In one, Duncan is wrapped in black-and-white striped fabric and wears a matching hat with a blue pompom. In the other, his wife, Karen, wears a red feather boa and one of her many hats. One of the portraits shows three different versions of the Duncans in different outfits, with a colorful carpet at their feet. It's 6.5 feet by 10 feet, which happens to be about the same size as Georges Seurat's A Sunday on La Grande Jatte.

"Each of those costumes, we were photographed separately — just the two of us, just on a pair of chairs," Duncan says. "The carpet was not there. It was in another room. So all this he brought together in his process. He went home with the raw photos and built the art piece."

Wally Mason, director of Lincoln's Sheldon Museum of Art, was also at the unveiling.

"[Udé is] really just taking fragments of life, assembled them in such a way that we see them in new light," Mason says of the artist. "And that's happened from the beginning of time. That's what art does."

As a boy in Lagos, Udé attended British schools and dreamed of life abroad in a place like New York. Meanwhile, his family engaged in a West African tradition: photographing people wearing new clothes.

"You have some clothes, some new clothes made by the family tailor. Oh, why not? Let's call [the photographer] over and have him do a group photograph," Udé recalls. "It was entertainment, really."

That entertainment set the stage for the rest of his life. In New York, he became a club kid and invented his own theories of dress, combining elements from across history. Udé is most interested in portraits, and specifically self-portraiture. Two years ago he showed his work at the Leila Heller Gallery, a major gallery in New York.

"I was thinking about engaging in a global grand tour, but through men's clothing," Udé says.

His self-portraits are a cross between court paintings and bright still-life images in which he is the focus. In one large picture, he wears a giant, Medusa-like wig and a 19th-century jacket. In another, he has edited the photo to give himself silvery, alien skin, and wears a zeppelin-shaped helmet.

"Sartorial Anarchy" pictures from the "Style and Sympathies Show" at the Leila Heller Gallery, 2013

"At first glance, it appears as though it is metallic and hard," Udé says of the helmet, "but it isn't. It's done in a manner that it absorbs blows or any arrows shot at it."

It's actually a 19th-century Uzbek helmet, made of tiny silver discs. The 47-year-old artist says that antique helmet should remind us that fashion shouldn't dictate to us; all fashion has its moment in time, and that time will pass. 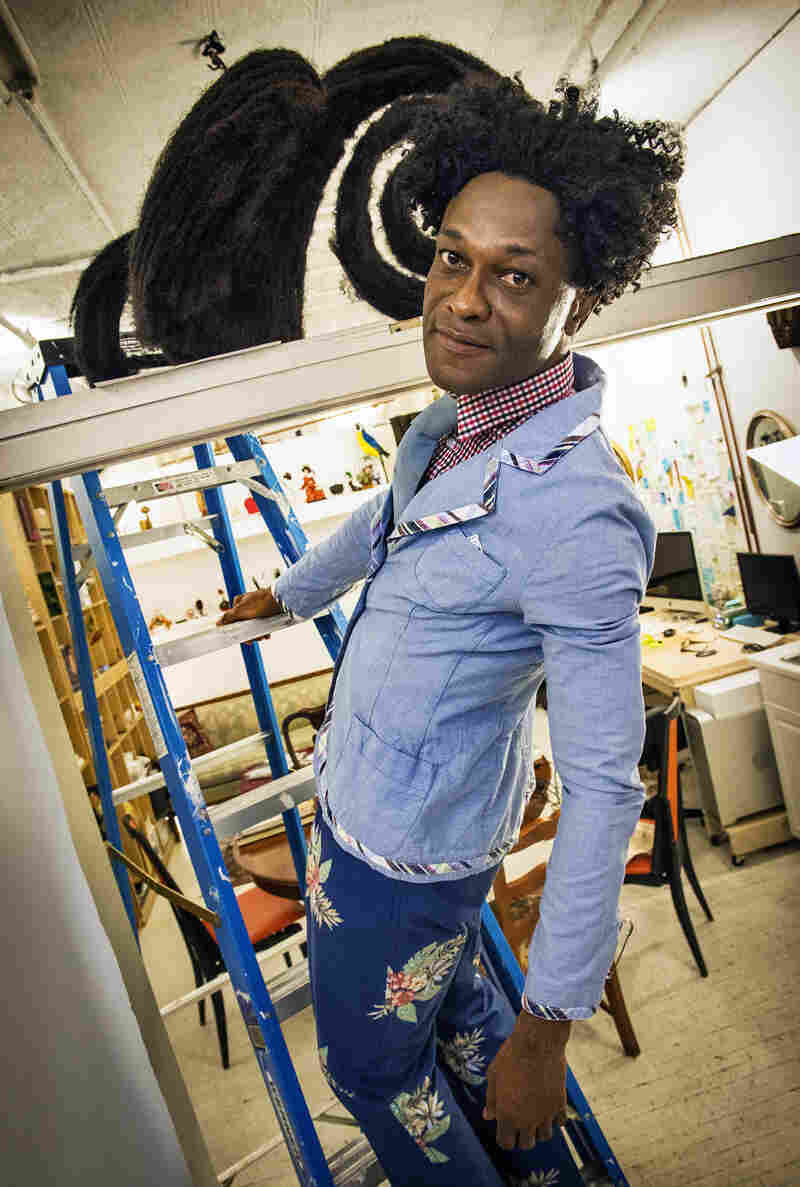 Udé says, "I don't like fashion particularly. ... What my interest regarding fashion/costumes [is] -- it's in the how we use it and the what we use it for and when we use it." Courtesy of the Seams hide caption

toggle caption
Courtesy of the Seams 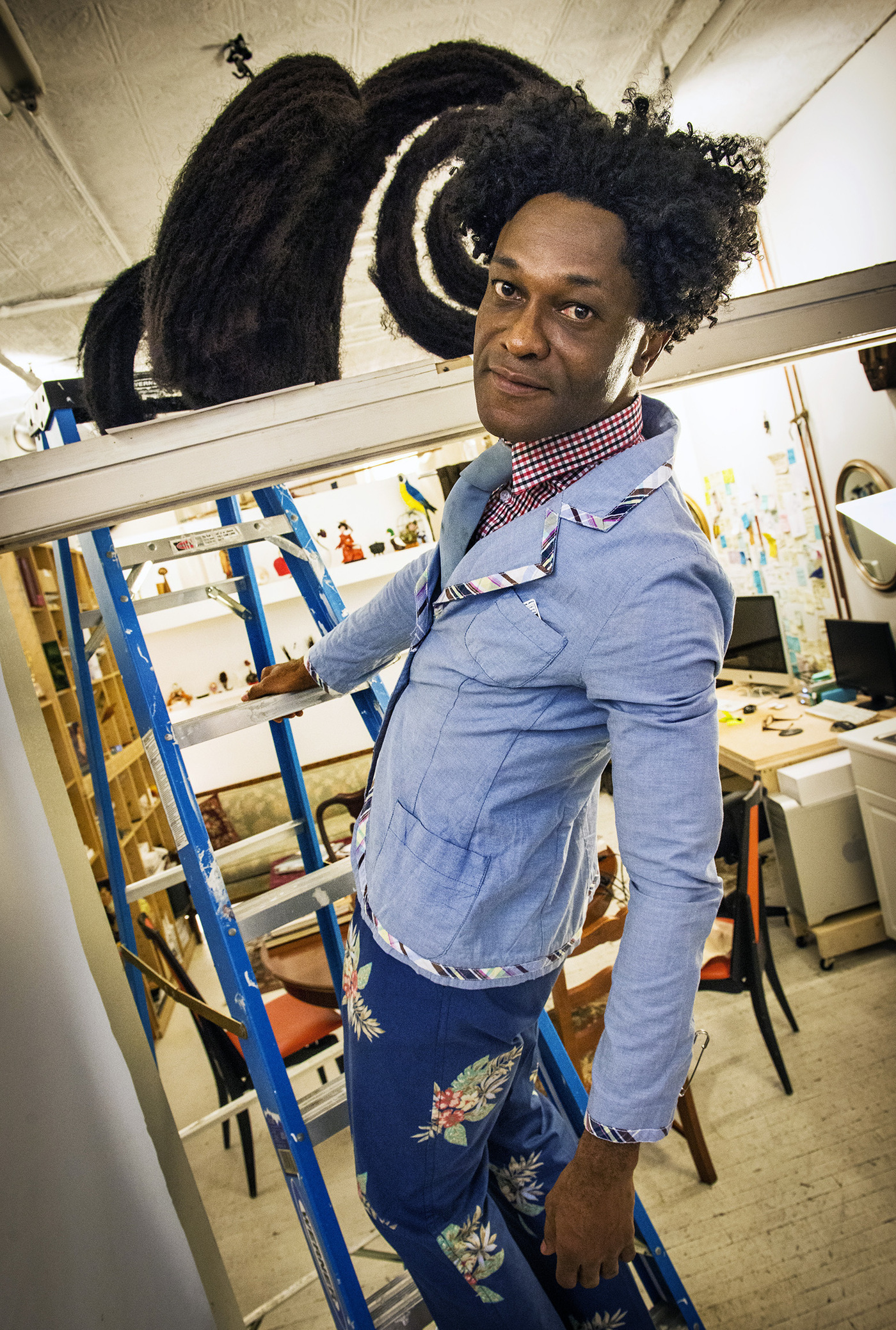 Udé says, "I don't like fashion particularly. ... What my interest regarding fashion/costumes [is] -- it's in the how we use it and the what we use it for and when we use it."

Courtesy of the Seams

Udé's originality has landed him on Vanity Fair's "International Best-Dressed List" twice in recent years, in the "Originals" category.

"It's sort of outside the norm of classic chic or elegance and it's reserved for people who are able to put themselves together in a way that is characteristic only of themselves; that's idiosyncratic but reaches some degree of art," says Amy Fine Collins, the list's editor.

Fine Collins especially respects how he deploys his raw materials.

"His sources range from designer brand names to thrift shop, second-hand, third-hand, cast-off odds and ends that he has a great eye for discovering," she says. "There's nothing that brings more glee to him than discovering a fragment of a jacket, a ribbon, a hat in some flea market bin."

For 15 years, Barnard College cultural historian Monica Miller has studied and written about Udé's work. She says he fits into the sartorial tradition of a dandy.

Why Black Men Tend To Be Fashion Kings

Confessions of a Modern-Day Dandy

"Dandies wear fancy clothing, sometimes in places where that's not appropriate," Miller says. "Dandies wear clothing that seems feminine or feminized when that might not be appropriate. Dandies might not be of a high social class, but by using clothing and accessories and a certain kind of style, make the lines between certain things like race, class, gender, sexuality — blur those lines. It's about using clothing and dress to signal other possibilities and to actually mess with people's expectations."

Udé has titled his ongoing pictorial series "Sartorial Anarchy: Style & Sympathies" because he doesn't like being dictated to.

"I don't like fashion particularly — fashion as in commercial fashion, like the brand names and designers," he says. "What my interest regarding fashion/costumes [is] — it's in the how we use it and the what we use it for and when we use it."

For decades, Udé has been at the intersection of art and culture in New York. His admirers include Harold Koda, curator-in-chief at the Metropolitan Museum of Art's Costume Institute, and Valerie Steele, director and chief curator of the Museum at FIT (Fashion Institute of Technology).

Both have essays in Udé's book, Style File: The World's Most Elegantly Dressed, which features portraits and interviews he's done. He also publishes an online magazine, aRUDE, dedicated to arts and culture and which takes its name from Jamaica and England's rude boy style.

Here's how Miller explains Udé's relevance: "What's important is not the labels; what is important is the combinations. It's ... that kind of, like, mash-up, mix-up, remix of clothing styles as well as eras that bring history in."

For this modern-day dandy, the past plays an almost sacred role in his art.

"If we have more sympathy in the fact that life is very ephemeral, we sympathize with people that came before," he says. "Because we, too, will become part of the past."

For Udé, the present turns to the future, too. He's currently preparing his next show — a series of portraits he's made of Nollywood stars, the rising talent of Nigeria's booming film industry.

The audio of this story, as did a previous version of the Web story, incorrectly states that Sheldon Museum of Art Director Wally Mason introduced the Duncans to Iké Udé. In fact, they were introduced by Mason's predecessor.