Accessibility links
Review: The Mountain Goats, 'Beat The Champ' On an unlikely concept album, John Darnielle takes a nostalgic but realistic look at the workaday underworld of the pro wrestlers he idolized as a kid. 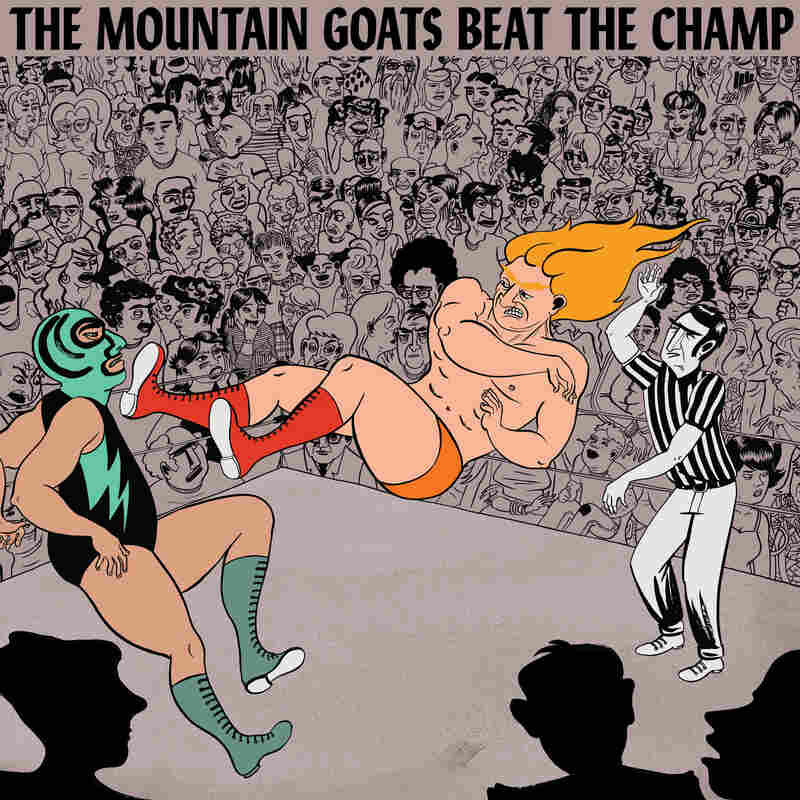 Beat the Champ Courtesy of the artist hide caption

When thinking about populism, it's easy to focus on either the relatable day-to-day struggles of average people — of the majority somewhere in the middle, glorified by so many rootsy tropes — or the more strung-out striving of those at the bottom. In politics and in culture, "the little guy" has typically made it far enough up the ladder to have a voice echoed in anthems and slogans, or else sunk far enough into desperation, homelessness or famine so as to surpass the need for detail entirely.

That's part of why The Mountain Goats' John Darnielle is such a profound songwriting voice: He seeks and studies and otherwise inhabits rarely explored margins, giving breadth, scope, shape and specificity to (mostly fictional) lives lived somewhere between ambition and despair. But he still makes their feelings and experiences universal, tugging at raw emotions that range from youthful frustration to nervy anger to the disappointment and ache that can accompany a lifetime of misfortune and mistakes.

Along the way, Darnielle has recorded and released hundreds upon hundreds of songs under the Mountain Goats name, making it all the more remarkable that he still finds new characters to embody and stories to tell. On Beat the Champ, he takes an ambitious concept — a nostalgic but mostly realistic look at the workaday Southwest underworld of the pro wrestlers he idolized as a kid — and teases it out to album length. Imagine the has-been subject of the 2008 film The Wrestler, then take away the part where he used to be famous; that's the world of "nameless bodies in unremembered rooms" that Darnielle examines with the most frequency and care here.

In keeping with many of The Mountain Goats' recent albums, Darnielle's band most often arranges Beat The Champ as a series of plaintive mid-tempo musings, saving the white-knuckled catharsis for a small handful of songs like "Werewolf Gimmick." It's a tone consistent with the songwriter's most commonly held perspective on these particular subjects — somewhere between mournfulness and awe — but it also allows crucial slivers of light to peek through the many shadows.

That flicker of optimism — coupled with a recurring belief in survival that runs through his career as a songwriter — lends crucial texture to Darnielle's songwriting. In "The Legend Of Chavo Guerrero," he tells of a real-life pro wrestler he idolized as a child, relating past glories in the ring while conveying a sense of faded wonder. But the song builds to a true-to-life twist: Rather than fading into oblivion, Chavo Guerrero raised a son whose fame as a wrestler exceeded his own, and found joy in the company of his family. Darnielle spends a lot of Beat The Champ in desolate parking lots and unremembered rooms. But he also loves his subjects enough to issue a reminder on their behalf, as he does in "The Legend Of Chavo Guerrero," that it can be "real sweet to grow old."