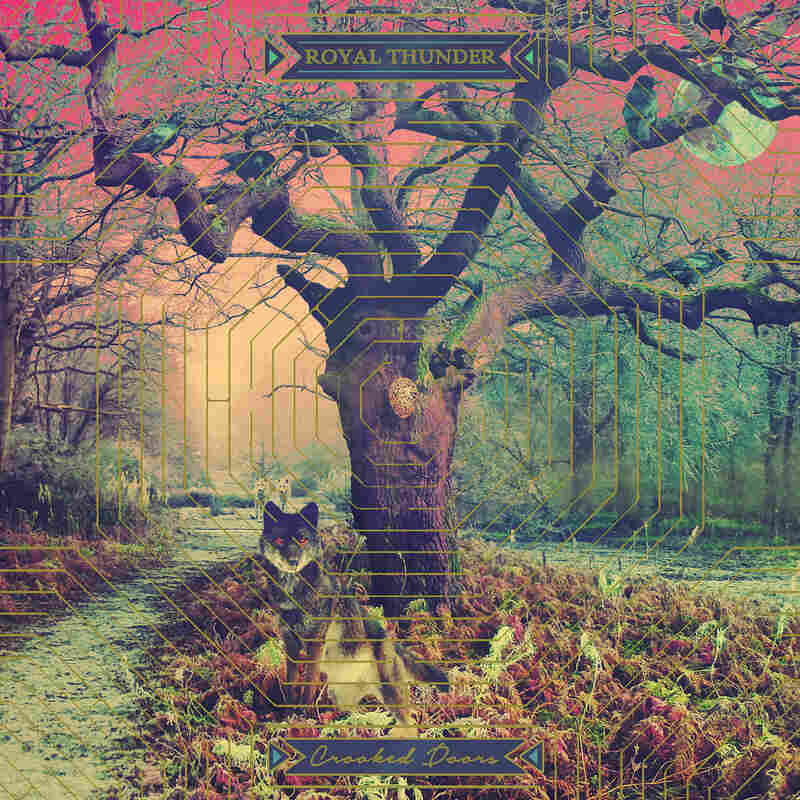 Writing a breakup album is one thing. Blood On The Tracks, 808s And Heartbreak, Domestica, Vulnicura — these records capture a heartbreaking perspective with power and clarity, but they each come from a singular voice. The breakup albums written in collaboration with a former partner, Rumours and Shoot Out The Lights among them, feel almost dangerous in their vulnerability. The romance has been cut but the music remains, entangled in ever-shifting emotions, somehow still rooted in love but not in love. That's where we find bassist/vocalist Mlny Parsonz and guitarist Josh Weaver on Royal Thunder's Crooked Doors: Their romantic relationship has dissolved, but they remain bound by and to each other's creative spark. Together, they've made a stunning hard-rock record that examines what happens after a breakup of any kind: freedom, but also a need to grapple with what it means to live with your own history.

Though Royal Thunder has toured with metal heavyweights like Enslaved and The Dillinger Escape Plan, and is signed to the prominent metal label Relapse, the Atlanta band has never fit easily into the genre. Weaver's guitar is too bluesy, Parsonz's vocals often sound too soulful, and Royal Thunder's sense of heaviness tends to come from an atmospheric and emotional space rather than from upside-the-head riffs (though the riffs are never lacking, either). Murky in its psychedelic production and cryptic in its lyrical themes, the band's powerful 2012 album CVI wrangled with Royal Thunder's place in heavy music. Crooked Doors, by contrast and in spite of its title, is an open door that empowers Parsonz to dig into her voice, while also allowing Weaver to pursue melodies in cleaner guitar tones.

"Time Machine" is as telling as any song here: It's a seven-minute power ballad that works through the inner dialogue of regret. Like Pantera's "Cemetery Gates" and Scorpions' "Still Loving You," it recalls a time when metal bands weren't afraid to show a softer side. When posing for a portrait at SXSW, Parsonz told NPR Music that the latter song "makes you feel so sick with hope," a sentiment that echoes throughout Crooked Doors. "One Day," in particular, is a masterful piece of musical storytelling. It's the song where Parsonz most directly bares her conflicted soul — "Life set me free and cut me down the middle / I'm stuck in between it / Don't put me back together" — but it's also where Weaver, with new guitarist Will Fiore (Zoroaster), is the most conversational when he himself doesn't sing. After two minutes of muted, beautiful arpeggios that background Parsonz's aching croon, Weaver takes the melody up an octave and plays alone with tenderness that only a pleading heart knows, as she belts, "I can hear you saying / Give us one more night / I got a really bad feeling / Did I get this right?" It's a crushing moment when you hear it, brave in its vulnerable exchange.

But Crooked Doors isn't all power ballads. "Forget You" hearkens back to the band's sludgy roots, but meditates more on atmosphere than on its chugging riff. A song about Mlny Parsonz's painful experience with the church growing up, "Floor" seethes in its restraint as hard-hitting power chords never stomp the fuzz. (The song closes with a liturgical chant: "You're free.") It's followed by "The Line," a barn-burner with rolling drums by new member Evan Diprima. "Ear On The Fool" is moodily intricate, heaving between playful Don Caballero guitar interplay and Southern soul. And if slide-guitar shredder "Glow" ever finds its way into a honky-tonk jukebox, Royal Thunder might have a new step-dancing fan base.

When asked why the band just didn't break up, Parsonz says, "We were meant to play music together. I am married to this band, and this is my destiny." It's encouraging to read, even though there's a world of hurt to that destiny, previewed in the two-part closer "The Bear." It explores an even quieter side of Royal Thunder with cello and piano, and eventually leaves Mlny Parsonz on her own as she sings, "And I wish I had the heart to move on / But I am not / I am not that strong / No, my love, I'm not that strong."