Accessibility links
Review: 'The Harder They Come,' By T.C. Boyle In his latest novel, T.C. Boyle is at play in his usual fields: California, baby boomer angst, fathers and sons. But critic Jason Sheehan says it's a gory, absurdist, expertly paced frolic. 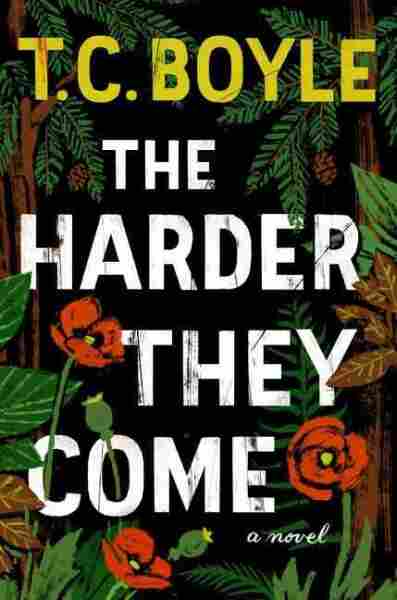 The Harder They Come

T.C. Boyle has been writing books for a long time. He's cranked out 15 novels since he got started in 1979, along with numerous short stories and collections of short stories and essays and whatever else writers write when they're worried about keeping the lights on or maintaining their brand.

And in that time, he has developed certain ... tics. Habits. Comfortable preserves where he can stretch and shout and play. Boyle writes a lot about California because he knows California. He writes about the baby boom generation because he's part of it and has had ample time to watch it grow, spread, shape the world, and die. And he writes about the dark side of life — of the cheats and liars and murderous impulses that squirm in damaged men — because, I dunno ... Because writing about rainbows and kittens must get dull as hell, and fast.

But to heap the stuffy weight of importance onto Boyle and his work (as some critics do, in the most lockjawed and stentorian way possible) is to ruin one of the pleasures of reading him, which is his ability to make the heavy stuff feel light and the serious stuff seem like a bloody frolic. He's like a modern Twain, but with absurdism in place of wit. Like Updike with an old leather jacket and a borrowed pistol.

And his newest, The Harder They Come? It falls smack into that zone, detailing with mincing precision the slow-burn dissolution-by-violence of one inter-related group of American archetypes so soaked in Boylesian circumstance that I'm surprised none of the characters made a Road To Wellville joke.

No, actually scratch that. I'm not. Because meta isn't really Boyle's game. Violence is, and Harder traffics in violence, beginning with one of his three protagonists, Vietnam vet and retired high school principal Sten Stensen, killing a would-be robber while on vacation with a cruise ship tour group in Costa Rica. And self-awareness is; that pops up later in the book when, after Sten has become something of a flash-in-the-pan celebrity for almost reflexively killing a brown kid in a brown country who'd dared to threaten a group of white Boomers, he wonders who is going to play him in the movie.

But meta is not, because Boyle remains, essentially, an old school novelist for whom any literary trick more modern than a narrator switch is unthinkable. He follows the straight path, bringing his Californians back from Costa Rica to Mendocino, then switching perspective to write about Sten's son, Adam — a mentally ill and delusional twenty-something obsessed with survivalism, guns, rugged individualism and the historical American scout and Indian fighter John Colter.

Sins of the father? You bet. That's another comfort zone for Boyle, and he traces a generational reflex for violence through father to son as Sten gets involved with a vigilante group angry about Mexican drug gangs growing weed and poisoning the bears in the Northern California forests, and Adam takes up with an older woman named Sara, a conspiracy-obsessed and comically dim-witted anti-government activist with anarchist fantasies and a love for animals and cheap wine. Then Adam has a schizophrenic episode and murders a man in cold blood.

One of the things I like least about T.C. Boyle is the way he begins things. One of the things I like most is how he ends them. He starts slow, meandering through the thoughts of his characters, following them as they walk, grocery shop or drive down the street. He can make five minutes take 15 pages, his writing as aimless and wandering as a daydream. And then, suddenly, the action.

In Harder, he's perfected his timing, using the same gimmick over and over again where a day begins soft and slow, then gradually twists and tightens until something has to break. And it works because, again, Boyle writes heavy that feels light. He handles topics like inherent racism, American individualism and the murderous character of the privileged white male as if he were writing a bubblegum thriller — injecting absurd humor (like Sara's looping conspiracy theories about the cops who took her dog away, or a Prius-vs-pickup, senior-citizens-vs-gangster car chase through the suburbs) in place of heavy-handed bloviating, and using the catharsis of sudden violence over moody introspection to bring his three American archetypes to their bloody, doomed and unavoidable convergence.

So while there might be those out there who really want to elevate (and pigeonhole) Boyle as an important writer dedicating his career and talents to considering these seminal concerns of the American character (or whatever), Harder proves he's too slick for that. Too clever. And between the bullets, the drugs, the SWAT teams and the insanity, maybe a bit too savage for the ivory tower as well.