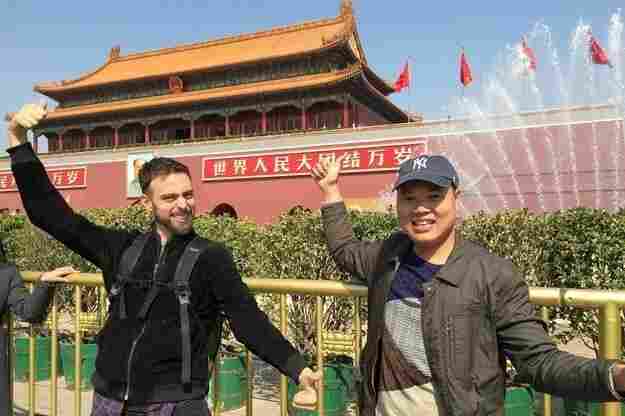 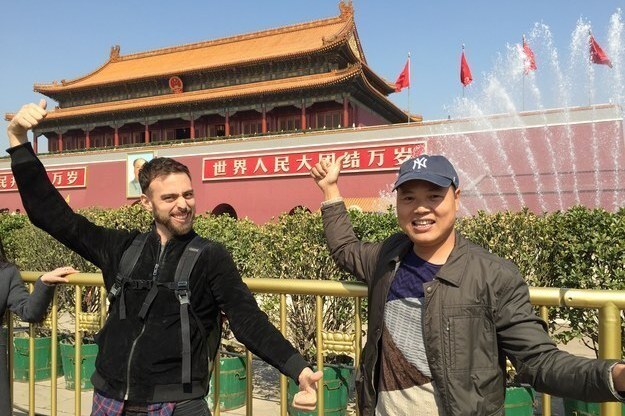 It started with a cell phone stolen from a bar in New York's East Village.

It ends — in China — with a crazy week-long meetup between the guy whose phone was stolen and the Chinese restaurant owner who ended up with that phone.

BuzzFeed writer Matt Stopera became a viral sensation in China after he discovered mysterious photos of a man posing with an orange tree on his iPhone's photo stream. He wrote a story about it, and users on Weibo, a Chinese social media site, found the man who ended up with his stolen phone.

A month ago, Stopera told NPR's Kelly McEvers about his discovery and how he became a minor celebrity in China. He returned to talk to NPR's Melissa Block about his trip to China and the unlikely friendship he formed with "Brother Orange."

"One of the lessons I learned is never judge a man by his selfies," Stopera says. "Because in his selfies he looks so serious, and in real life, he was just the warmest, funniest, very smart guy."

Click on the audio link above to hear the interview.

It started with a cellphone stolen from a bar in New York's East Village. It ends in China with a crazy week-long meet up between the guy whose phone was stolen and the Chinese restaurant owner who ended up with that phone. The whole thing a viral sensation across China propagated through social media. A month ago on the program, we heard the first chapter in this story from BuzzFeed writer Matt Stopera. He joins us now for the latest wild installment. Matt, welcome back.

BLOCK: Let's give a brief rundown of how this all started. Your phone was stolen. Eventually, you started seeing pictures on your new phone of a guy posing with an orange tree. You posted about that on BuzzFeed. Netizens in China made it their mission to track down the orange tree guy. Brother Orange is found, and then he invites you to visit, so you headed off to China a few weeks ago. You're now famous in China, right?

STOPERA: It doesn't make any sense at all. So we kind of became a famous couple almost. We were riding around in cars with our faces on it.

BLOCK: What do you mean with your faces on it?

STOPERA: They had big decals of me and Brother Orange, a picture of us together, and so that everywhere we went, it was just - it was crazy.

BLOCK: Well, you and Brother Orange had amazing adventures. You've put this all up on BuzzFeed with photographs and videos. Tell us about some of the things you did in your time in China with Brother Orange.

STOPERA: I basically got to see this city - this southern Chinese city - called Meizhou where he's from, which is relatively unknown in China. But there's 4.5 million people who live there, which makes it bigger than Los Angeles (laughter). I kind of describe it - it's like Savannah, Ga., with, you know, the overhanging trees, but with huge lush mountains and red rocks, and it's beautiful.

BLOCK: I especially love the pictures, Matt, of you and Brother Orange in the mud baths.

STOPERA: (Laughter) That was this resort where they do mud baths. And, you know, we have a press pool following us, and they're just all around us taking videos and watching me and Brother Orange take a mud bath, and that was really funny. I think that that was one of the moments where me and Brother Orange actually became really close because we were both in on this crazy experience, and we were just like, I can't believe this is happening right now.

BLOCK: Well, what did you get to know about Brother Orange and his family?

STOPERA: Coming into this, one of the lessons I learned is never judge a man by his selfies because in his selfies he looks so serious, and in real life he was just the warmest, funniest, like, very smart guy. And he has four kids - three girls and a boy - and he has a wife, and they were all just so legitimately touching how they welcomed me into their home and into their family so quickly.

BLOCK: You speak virtually no Chinese, right? Brother Orange speaks just about no English. How were you communicating?

STOPERA: We had two translators, but, you know, you'd be surprised about how much nonverbal you can do with each other. You know, how much you slept. Did you sleep well? We also, in the middle of the trip, we developed this, you know, symbol where we tapped our hearts and said happy, happy, happy, happy whenever we, you know, had a moment. And so when I think about that, that's just big.

BLOCK: It looks, from the way you've described it, that it was really hard to leave Brother Orange by the end of your trip.

STOPERA: This is one of the hardest things for me to explain because a lot of people - did you really become friends with Brother Orange? And it's one of those things that we went through this experience together and I bring it back to a big part was this Chinese idea of fate and destiny. And you can't help but understand that and really believe in that at the end of this trip that, you know, this whole thing was kind of meant to be.

BLOCK: Well, Matt, thanks for talking to us about your visit with Brother Orange, and I hope he does make it here to see you, too.

STOPERA: He will (laughter).