Accessibility links
Review: Calexico, 'Edge Of The Sun' Though the scenery of the American Southwest remains largely unchanged, the band's sense and understanding of it continues to deepen and grow.

Review: Calexico, 'Edge Of The Sun'

Review: Calexico, 'Edge Of The Sun' 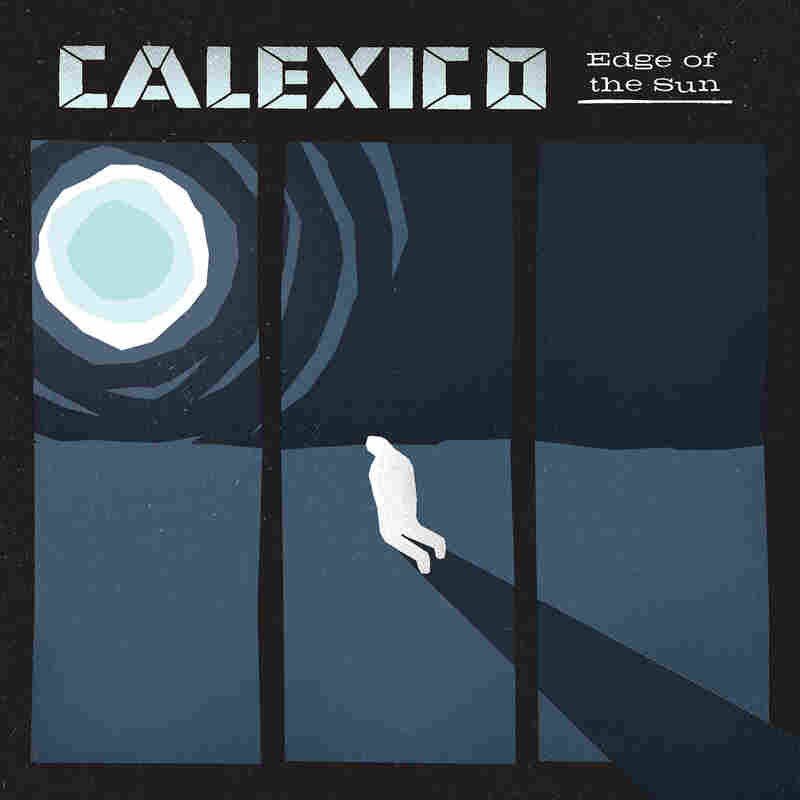 Edge of the Sun Courtesy of the artist hide caption

Really, how much hoodoo can there be out in the desert?

Drive through it, and the romance of the place might elude you. A closer engagement, on foot, may prove even less enchanting. The feeling of myth and mystery that many have immortalized, from Gram Parsons on down, is not necessarily obvious to the tourist eye. The landscapes that have inspired novelists and painters, as well as bands like Calexico, look fundamentally different to natives and longtime residents. Visitors see dust and wind and sky and strange whippoorwill sounds echoing across lonesome mesas. Natives see an ecosystem with its own codes and ancient philosophies.

The miracle of Calexico: Though the scenery of the American Southwest remains largely unchanged — give or take varying degrees of water panic — the band's sense of it continues to deepen and grow. What began, nine albums ago, as a series of outsider snapshots has evolved into a more studied portrait of something beyond ersatz trinkets and cheap norteno knockoffs. Something poignant, nuanced, reverential. It's too early to tag Edge Of The Sun as the band's masterpiece, but song for song, it's the most textured and dimensional Calexico record. It starts with a screaming blast of pure pop asking the musical question, "Where do you fall when you have no place to go?" and from there, it rambles through all the desert permutations of no place to go — the tiny cantinas where the narcocorridos tell their tales, the gulches by the side of the road where the drifters rest, the places best described by their nothingness.

All of it drips heat. As with everything from the band, especially the similarly diverse 2003 album Feast Of Wire, Edge Of The Sun covers lots of stylistic ground — what knits it together is that constant, tremolo-like shimmer of sun radiating off of brush, dirt, pavement. The sources of inspiration, evident in various ratios at various times during this variously populated band's run, are usually rendered in reviews as an equation involving mariachi, tequila, Steinbeck, narco ballads, Morricone, norteño, Hank Williams, border wars, Barbara Kingsolver, the kitsch wing of indie rock, Dylan circa John Wesley Harding, psychedelic surf of the '60s, Byrds-y high harmonies and baritone guitars.

From these, Calexico has fashioned an alluring, sometimes overstuffed, strangely durable audio mythology. The sonic aesthetic has evolved over the years, but mostly in small ways: Edge Of The Sun features some snazzy brass writing, and vocal-harmony arrays that scream rainbows the way the Grass Roots and other pop acts of the '60s did. The atmospheres, as richly detailed as they are, exist in service of sly, high-level songwriting. Founders Joey Burns and John Convertino understand the forms and structural basis of the styles, as their take on mariachi draws on the chord progressions and melodic turns embedded within some of the form's classics. While the music can ride a wave of irreverence — see the giddy bilingual "Cumbia De Donde," featuring Amparo Sanchez — it's never simply a glib touristic re-creation. You can learn something from it. There's always basic respect for the forms, as well as sensitivity to the ways to subvert them: It's an act of worship to transform something as easily stereotyped as mariachi into music that's vivid and cinematic and original. That's what's going on here.

Calexico doesn't just conjure the physical landscape; one of the striking aspects of the new work is the way it also explores the peculiar psychological aspects of the place. Running through songs like "Bullets And Rocks" and the luminous "When The Angels Played," which nods at Dylan in beautiful ways, are flashes of certain character traits that exist in the rugged desert dweller: There's the default suspicion that drives so many Westerns, and the sense of desolation, the fear that leads some to follow the latest apocalyptic prophets, and so on. Calexico doesn't sensationalize any of it — instead, in calm and vivid language, it guides listeners past what could be seen as the freak-show aspects of the landscape to look at ways that the relentless heat and the sameness of the land affects its inhabitants. There's a sense, running through these songs, that the romance of a place never tells the whole story: Look closely at the grim guy proclaiming that "the future is bullets and rocks," and you might see the archetypical brave upstanding Western citizen. Or a meth kingpin.

Burns and Convertino have always involved a circle of people in Calexico projects, and for this one, they caught inspired performances from Iron & Wine's Sam Beam and other "regulars" (Amparo Sanchez, Neko Case), as well as musicians from many other backgrounds and styles. These personalities — including Ben Bridwell from Band Of Horses, Nick Urata from DeVotchKa, Gaby Moreno, Carla Morrison and multi-instrumentalists from the Greek band Takim — pick up on the in-studio spirit of improvisation. What you get with Calexico is not just a collection of songs rendered by ace musicians, but also the sense that all involved are into the journey.

Edge Of The Sun came about through distinctly physical journeys: At the suggestion of keyboardist Sergio Mendoza, Burns and Convertino spent 10 days in the historic Mexico City borough of Coyoacán at the beginning of the process, writing and soaking up ideas. Curiously, some of the least "Mexican" material was birthed there, including the Big Star-tinged opening track "Falling From The Sky" and the ethereal, mysterious "Tapping On The Line."

Another aspect of this collaborative method: Some of these songs sprout little journeys within them, great swerving detours and moments when, seemingly out of nowhere, the intensity just picks up. One of the most transfixing of these happens near the end of the record, in "World Undone." Oriented around a steady drone, the tune is a threadbare thing — a blues guitar riff, a melody you'd hum while walking. It starts small and seems destined to stay that way. Through the murk come hushed, chanted words: "Can't trust in this anymore" and "What keeps you here anymore?" and "Now your world's coming undone." It's an internal psychodrama, and just as the darkness of it begins to sink in, after three minutes or so a groove erupts. The weather changes. A violin dances along, playing a wistful counterline. The walking tempo picks up some steam, and what had been a moody reverie balloons into something purposeful, billowing, stirring in a cinematic way.

It's the kind of live eruption that couldn't happen if the music were assembled part-by-part. And it's proof of concept, if any were needed: Returning to its longstanding sources of inspiration, Calexico has somehow gone deeper, tapping the dry desert earth until it yields new realms of thrilling, unexpectedly potent sound.