Accessibility links
When Did Humans Start Shaping Earth's Fate? An Epoch Debate Some scientists suggest calling the era we live in the Anthropocene, to denote the time when humans came to dominate Earth's fate. But did it start with farming, the atom bomb or another event? 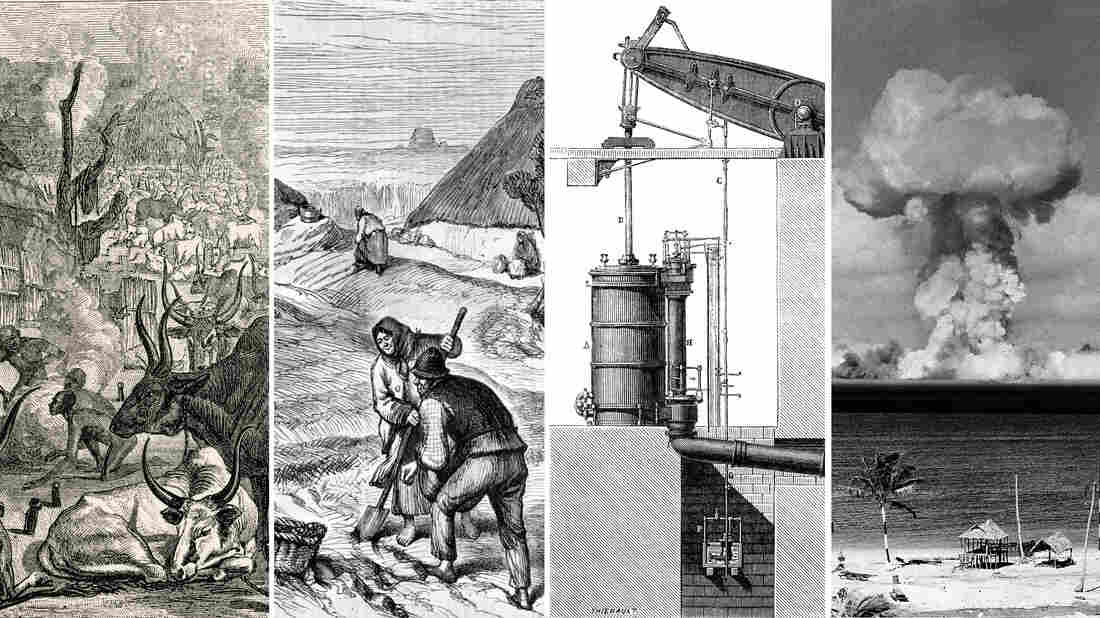 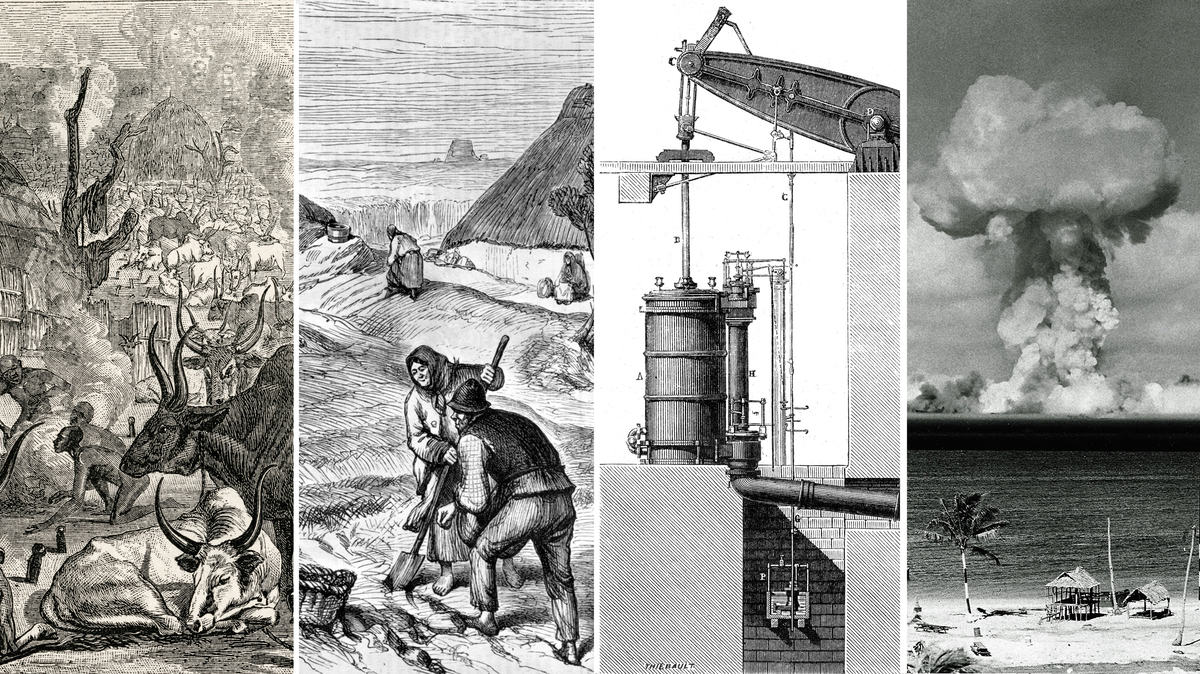 Humans have influenced Earth's history for thousands of years, though some scientists count changes of the last two centuries as especially notable.

Humans have had such a huge impact on the Earth that some geologists think the human era should be enshrined in the official timeline of our planet.

They want to give the age of humans a formal name, just as scientists use terms like the Jurassic or the Cretaceous to talk about the age of dinosaurs.

But some researchers think that formally establishing an "Anthropocene" — as many call it — as part of the geologic time scale would be a big mistake.

The debate is heating up as a working group is getting closer to making recommendations to the scientific organization that decides such things — the International Union of Geological Sciences. The working group's interim report is expected by next year.

"The Anthropocene does, the more you look at it, become more geologically real," says Jan Zalasiewicz of the University of Leicester in the United Kingdom, who's a member of the group. "We seem to be moving towards saying that the Anthropocene should be formalized."

"If the Anthropocene began in 1945, then the entire story of changing the surface of the Earth by cutting forests and plowing prairies occurred before the Anthropocene. Does that make sense?"

The Earth is about 4.5 billion years old. Scientists have divided up that vast stretch of time into categories and subcategories. There are eons and eras and periods and epochs, says Zalasiewicz. "Currently, formally, we live in something called the Holocene epoch."

He says the push to give an official name to the time of human domination began about 15 years ago. A prominent atmospheric chemist named Paul Crutzen spontaneously came up with the term at a meeting where people were talking about environmental change in the Holocene, and he later learned that biologist Eugene Stoermer had been using it as well.

As an informal term, it's really caught on, and all kinds of scientists are now using it. The question is whether or not to make it official. And that question is a lot trickier than it might seem. For example, scientists would first have to define when this new age began.

One early idea was that it began with the Industrial Revolution, says Zalasiewicz, "but the majority of us are beginning to favor a more recent time, in the mid-20th century."

That's because this is when human activities first left clear marks in the geologic record. Geologists like to see those kinds of unmistakable signals in the rock to mark the beginning of an official time period.

And about the same time, the world started to be sprinkled with a byproduct of fossil fuel combustion called spheroidal carbonaceous fly ash particles.

"They would be a good marker for the Anthropocene if it is decided that it started in the mid-20th century," Neil Rose of University College London told NPR by email. He's just published a report showing a dramatic increase in accumulations of these particles starting around 1950.

But some researchers say, wait a second — humans actually began to transform the planet thousands of years earlier, with the development of agriculture.

"If the Anthropocene began in 1945, then the entire story of changing the surface of the earth by cutting forests and plowing prairies occurred before the Anthropocene," points out Bill Ruddiman, a climate scientist at the University of Virginia. "Does that make sense?"

In the current issue of the journal Science, he and some colleagues argue that the Anthroprocene is a useful concept but that trying to formally define it isn't helpful.

"I think this formal definition would be a mistake," says Ruddiman. He compares it to a group of historians trying to say that the settlement of the American West started with the completion of the Sears Tower in Chicago in the early 1970s. "That just leaves out an enormous, rich, interesting history, if you did something like that."

Plus, the geologic time periods in use today were originally developed as scientists tried to piece together Earth's unknown history by looking at rocks and fossils — because rocks and fossils were all they had. Humanity's impact on the Earth can be traced in a totally different way, points out Stan Finney, a geologist at California State University, Long Beach.

Is Planet Earth Under New Management?

What's more, he asks, "Does it really need to be formally defined? We have many terms for major events in Earth's history that are not part of the geologic timescale."

When the first plants evolved to grow on land, there were dramatic changes to the Earth's surface and atmosphere. "We don't have a name for that incredible revolution and period in Earth's history," Finney says. "We refer to it, the time during which it occurred, as from the late Devonian through the Pennsylvanian."

He says proponents of a formal term seem motivated by the desire to make a political statement. One editorial in Nature in 2011 argued that formally defining the Anthropocene "would encourage a mindset that will be important not only to fully understand the transformation now occurring, but to take action to control it."

But the various bodies under the International Union of Geological Sciences that would have to consider the creation of a new term normally devote themselves to pondering highly technical issues in geology, rather than political questions.

"It's quite a long road ahead," says Zalasiewicz, who expects that nothing will be settled for at least a few years.