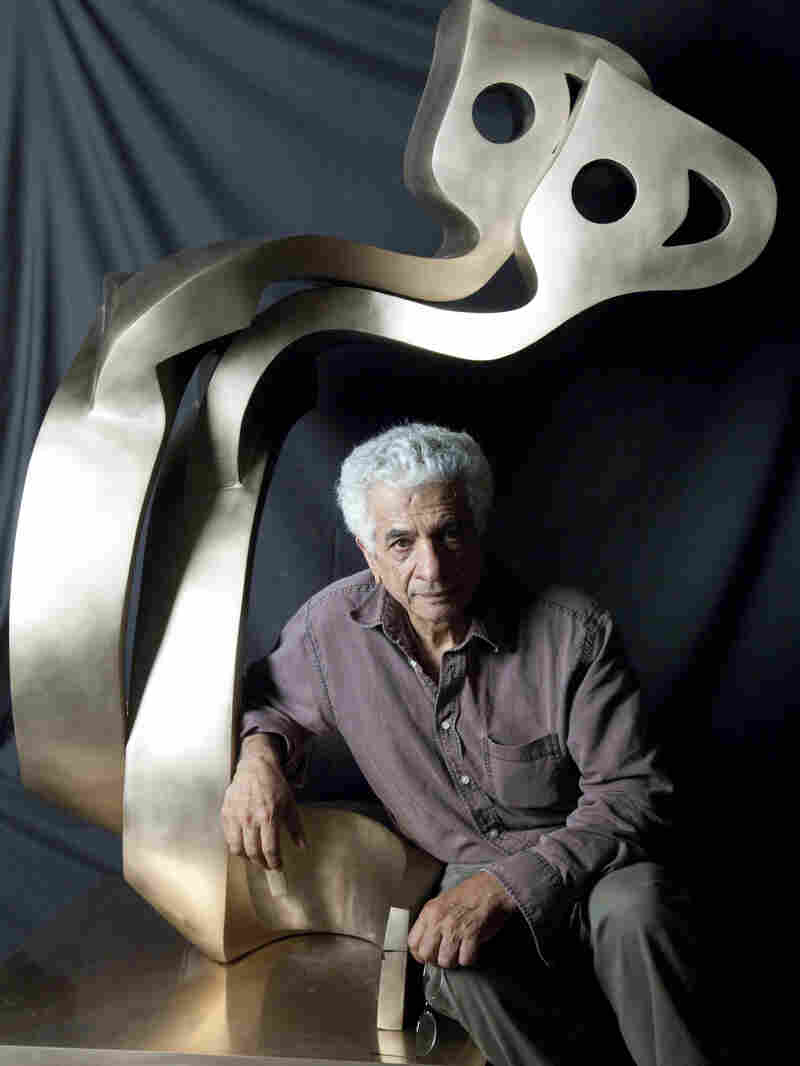 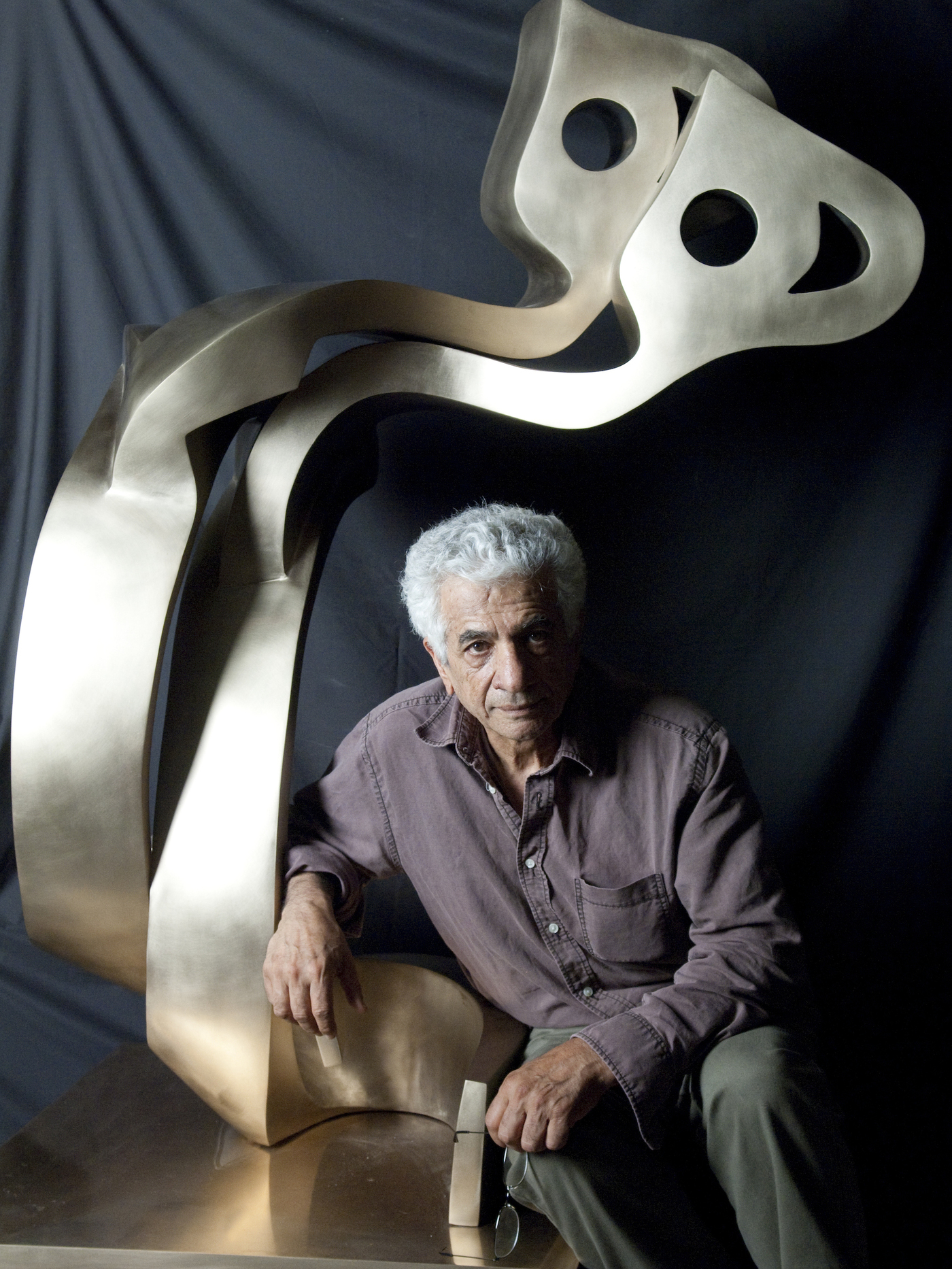 With his head of silver hair and stylish black blazer, Iranian artist Parviz Tanavoli looks younger than his 77 years. He's been called the father of modern Iranian sculpture, but he hasn't had a major museum show in the U.S. in almost four decades. Now, Wellesley College's Davis Museum is giving viewers a chance to see 175 of Tanavoli's sculptures and drawings.

While leading a tour of the Massachusetts school's gallery, Tanavoli stops in front of his curvaceous sculptures known as "Heeches."

"Any Iranian could easily read this," he says, referring to the sculptures. "It's composed of three letters: H, the head is like H; then the center part is like I or double E; this curve is like CH at the end." On paper, the Heech is a slender piece of calligraphy that's popular in Persian poetry: It means "nothingness" in Farsi.

"The other advantage of this word is all the meanings behind it," Tanavoli says. "... All the great poets like Rumi, they deal with this word; they question about it. What is Heech? I mean, is there nothing?"

Tanavoli has crafted hundreds of Heeches over the past 50 years — in ceramic, bronze, fiberglass and even neon. They are graceful, almost human forms that connect with viewers and helped revive sculpture as an art form in Iran. 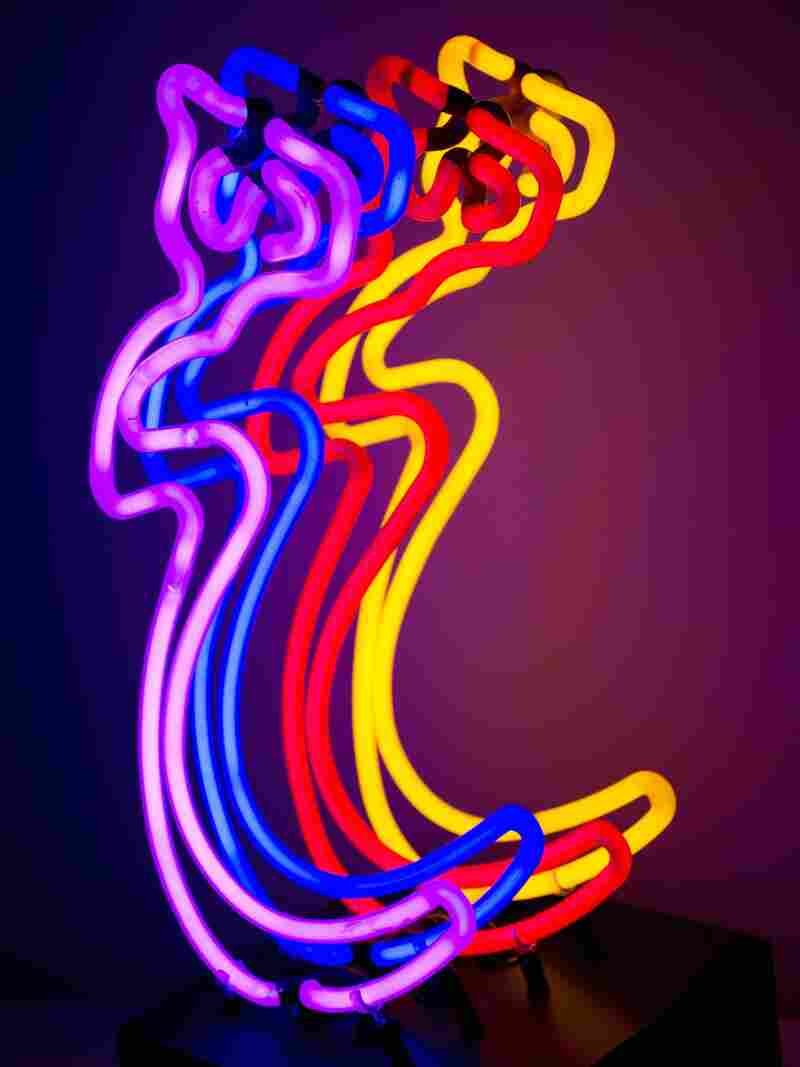 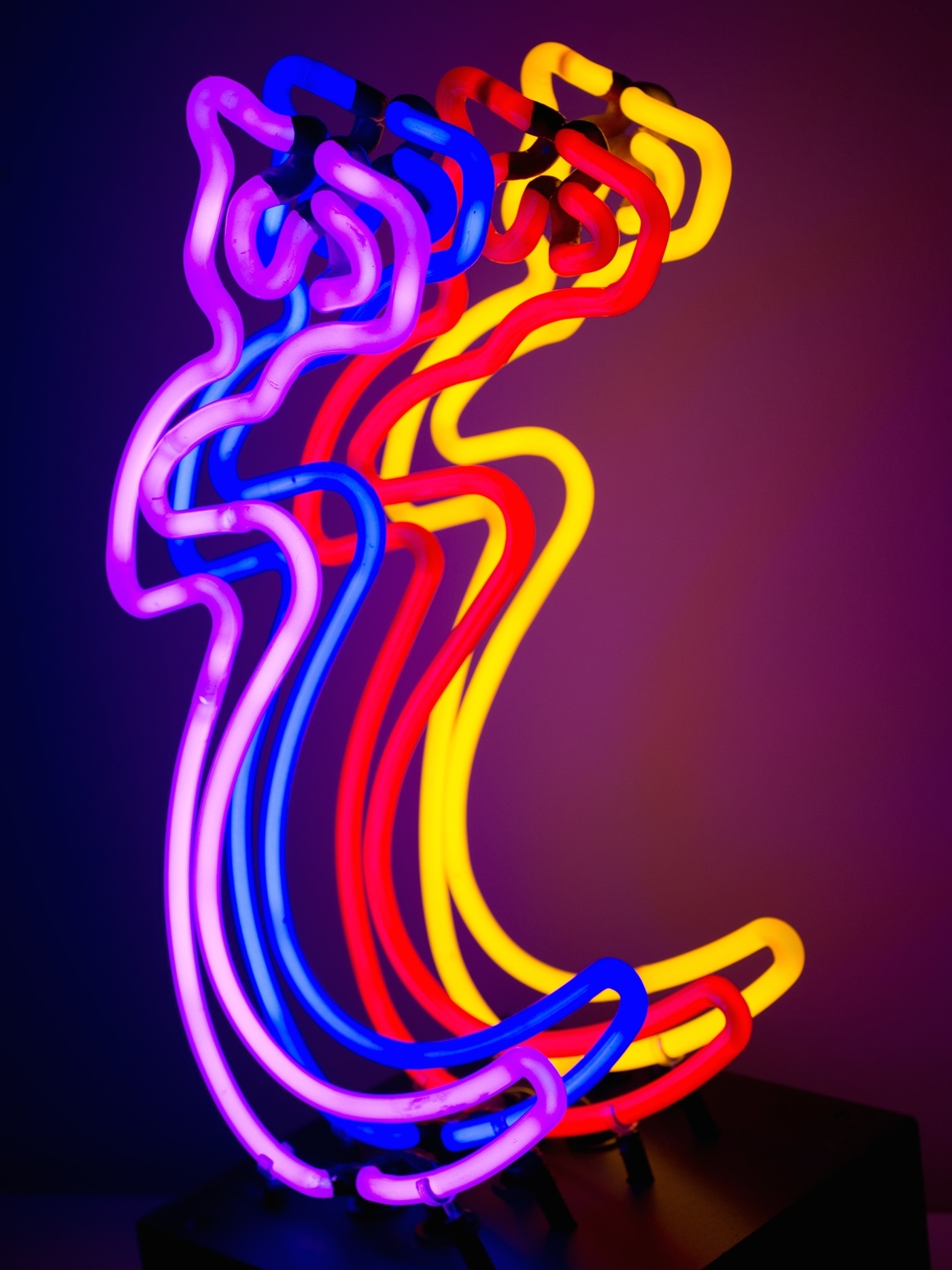 "He's definitely the pride of the Middle Eastern art scene," says Ali Khadra of the contemporary art magazine Canvas, based in Dubai, United Arab Emirates. Khadra flew to Boston for a 24-hour visit just to see Tanavoli's new exhibition. He calls the sculptor "a beacon of hope" for aspiring artists in his politically tense region and he hopes this show will help bring a little of the culture behind the headlines to Western audiences.

"It's like a chain reaction," Khadra says. "When a museum is interested, an education program takes place and the interest keeps growing. And this is how the West will know about Middle Eastern art."

The 'Good Days' In Iran

Sculpture died off as an art form in the region now known as Iran after the Arabs conquered Persia in the 7th century. At the time, visual depictions of the human body were at odds with the Muslim belief that art is a representation of the divine. But after studying sculpture in Italy in the 1950s, Tanavoli returned to Tehran and opened a studio that became a magnet for young artists. 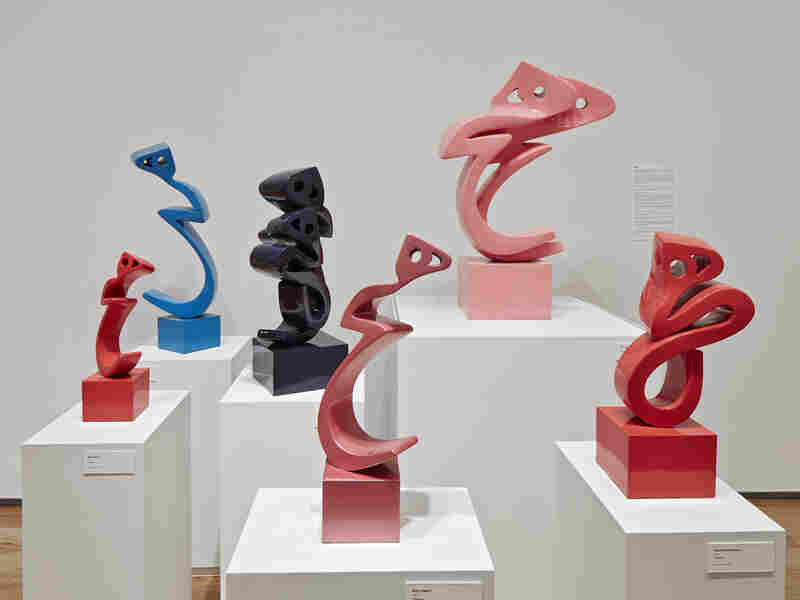 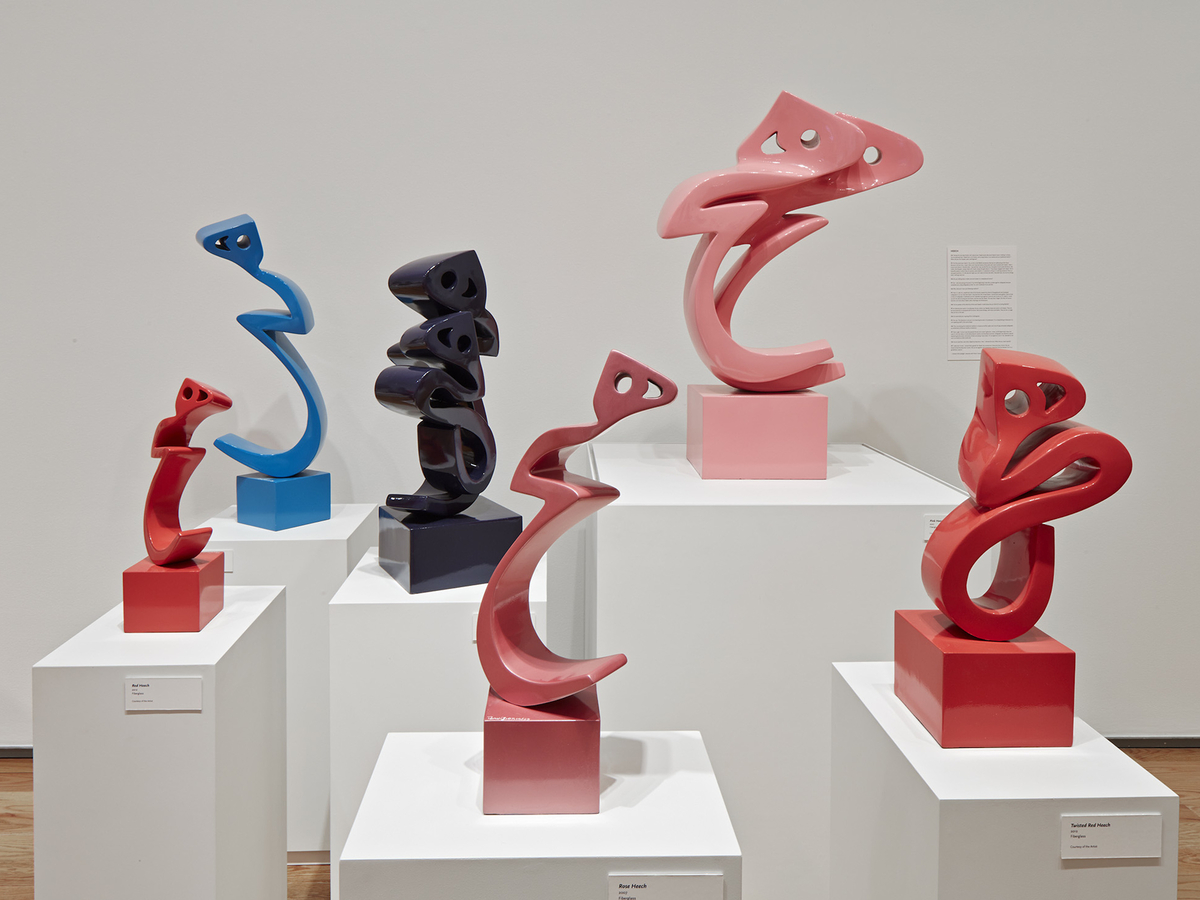 Charles Mayer/Courtesy of the Davis Museum

"It was very exciting for [me]," the artist says. "I was young and I thought I was doing something and I worked very hard for it. And when I look at it today, I'm proud of it. They were good days."

But they were also challenging.

In 1965, authorities shut down Tanavoli's gallery show in Tehran because it merged materials and imagery from the East and West. Things got more complicated for the artist with the 1979 revolution and the taking of hostages at the American embassy in Tehran. He ultimately left his teaching job at Tehran University and moved his family to Toronto.

A Cultural History Lesson Through Art 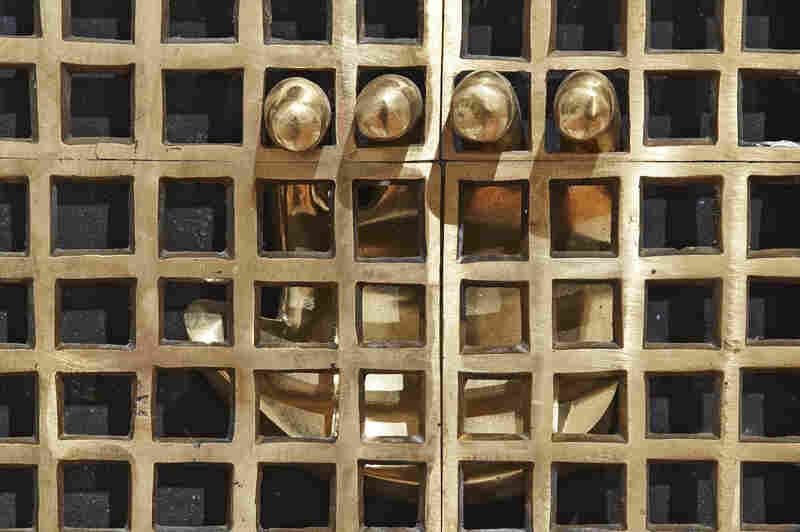 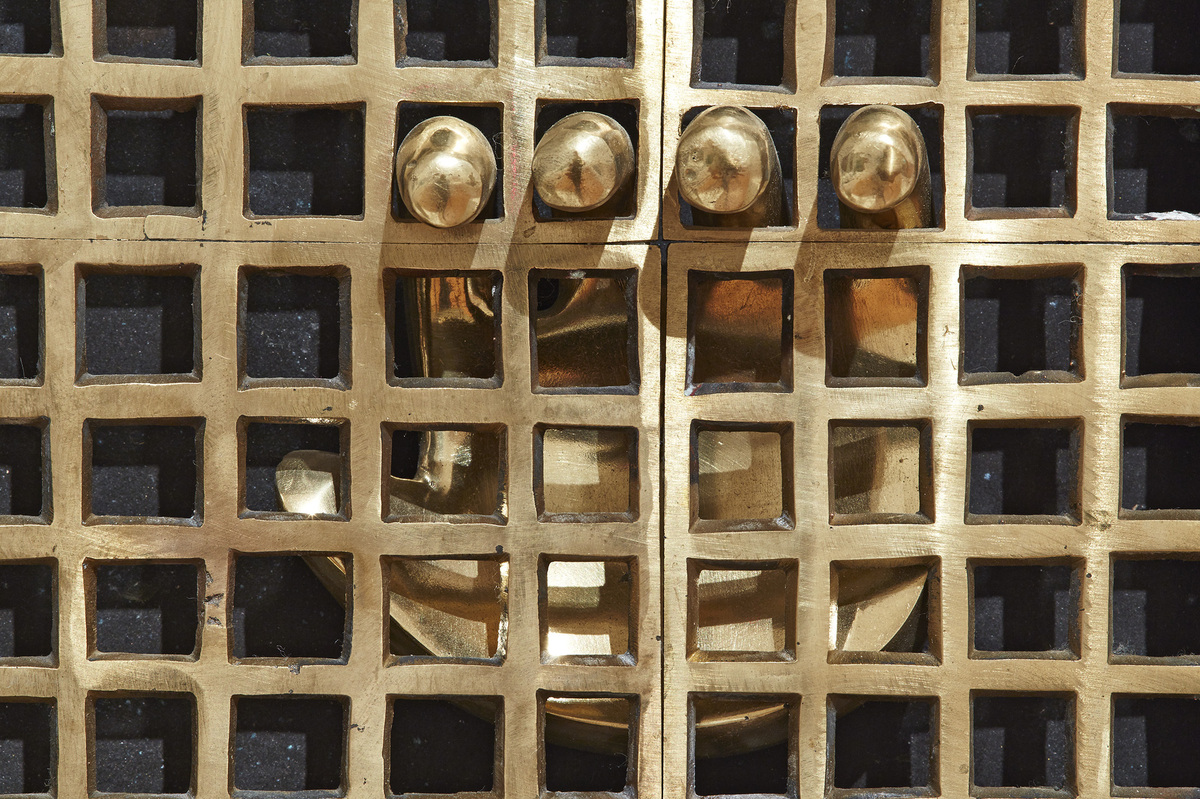 Shiva Balaghi is a Middle Eastern culture historian at Brown University and co-curator of the Davis Museum's show. She says you could teach a seminar on modern Iranian history through Tanavoli's work. "You see the common art of the streets of Tehran represented in his work; you see Iranian folklore; you see ancient Persian myths. But you also see that within Iranian society and culture there is this poetic and lyrical spirit and this sense of humor that withstands regardless of the day-to-day political situation."

That situation is reflected in some of Tanavoli's mor e brutal, confining imagery of cages, locks and jail cells. Still, Balaghi thinks Americans will be surprised to see how optimistic this Iranian's work is.

'Heart' Of Iranian Identity Reimagined For A New Generation

At The Met: A Middle East Transition, Centuries Ago

"There is this sense of gratitude for the simple things in life — like the image of a bird flying, like the shape of a letter in the alphabet," she says.

Tanavoli keeps a foundry and studio in Iran and lives there part of the year, but he admits that politics have hindered his country's ability to share its culture. He says, "We used to be very well connected with Westerners ... but now it's unfortunate because so much has been happening in Iran in [the] last 35 years in culture — music, film and all of that — a lot of people are not even aware of it."

They'll get a chance to learn a little more through two other U.S. shows of contemporary Iranian art — one at the Guggenheim Museum in New York and another at the Hirshhorn Museum in Washington, D.C. Meanwhile, Tanavoli says he's honored to have his work act, for now, as something of an ambassador.

"Iran has a long culture, millenniums of culture," he says, "but for today I think this represents Iran pretty good."