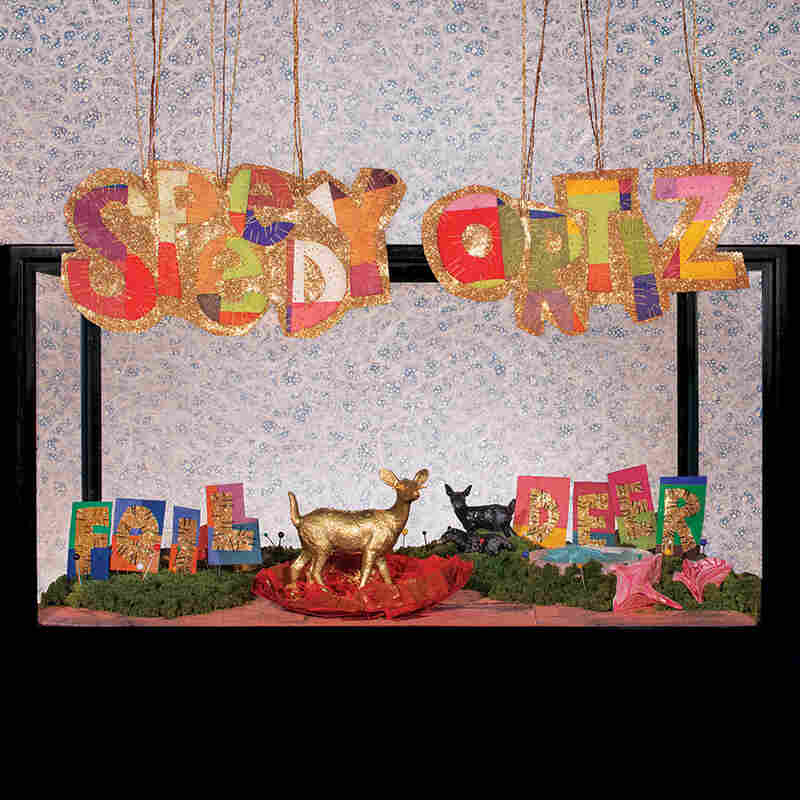 In the dissonant opening seconds of Speedy Ortiz's new album, Foil Deer, Sadie Dupuis lays out her mission statement concisely: "I've known you not so very long / but watch your back, because baby's so good with a blade." Throughout the record, the songwriter and guitarist repeatedly references that sort of vivid and violent imagery, as her forceful words match the band's scorching fury. The message is clear: Don't find yourself on Dupuis' bad side, because her weapons of choice are a skillfully wielded guitar and a sharp tongue.

Considering her knack for wordplay, it's no surprise that Dupuis recently completed an MFA in poetry at UMass-Amherst — impressive for anyone, let alone someone in a constantly touring band. Still, in a year brimming with new records by superb songwriters (Courtney Barnett, Waxahatchee's Katie Crutchfield and Torres' Mackenzie Scott, to name a few), Dupuis sits in good company as one of rock's most compelling young voices and lyricists. As part of Massachusetts' vibrant DIY scene — alongside Pile, Krill, Potty Mouth and others — Speedy Ortiz has quickly asserted itself as a live powerhouse. With Foil Deer, the band takes another giant leap.

Speedy Ortiz's songs are a tug of war between diaristic accounts and abstraction, as Dupuis reels off complex, introspective emotions, then masks them in cryptic linguistic misdirection. She also deploys plenty of quotable one-liners which ping-pong delightfully off the tongue — "Brain like a sphinx, but got nails like a prom queen," she sings in "My Dead Girl." But the deeper you dig, the more those densely packed, unapologetic gems reveal personal scars, anger and pain that cuts deep. "I was the best at being second place, but now I'm just the runner-up at being the second one you think of every day before you go back to one," she cleverly unwinds in "The Graduates," a song that tackles a dead-end relationship.

Foil Deer isn't a breakup record, exactly, yet practically every song is united by recurring threads of anxiety, rejection and fuming over friendships turned sour. In the swaying waltz "Mister Difficult," Dupuis sings, "It's always time to call you out / since I'm the one that you should be about." In the album's closer, "Dvrk Wvrld," she sings, "It's cruel to be blatant to a life that you've thrown away / but there's no use for patience with a barrel of snakes," before musing in the final lines, "A heartache that numbs you even when it coats you."

Where Speedy Ortiz's earliest songs mined the past for mistakes or dredged-up drama, these songs often mull over vulnerability and exposed nerves from a place of emboldened self-assuredness. "I am not averse to getting salt in my face / Let me marinate a week and reevaluate. ... I have been rejected for most everything / Take me off your list or elect a lobotomy," she sings in the stinging rocker "Swell Content." There's a sense that Dupuis gets her revenge by simply moving forward and taking control over her life. That's especially true in "Raising The Skate," a blistering kiss-off which finds her unwilling to keep letting toxic people underestimate her. With its satisfying refrain ("I'm not bossy, I'm the boss... caller of the shots"), the song asserts itself as a feminist call to arms.

As opposed to the four days allotted to make Major Arcana — a process which left the recordings sounding raw — Dupuis exiled herself at her mother's home in the Connecticut woods to write much of Foil Deer, then allowed her band time to craft a fuller sonic stamp. The result is enhanced by richer vocal harmonies, flurries of arpeggios and atonal textures, as well as acoustic guitars and even keyboards. The most dramatic shift can be heard in "Puffer," a brooding track that hints at both industrial rock and late-'90s R&B pop (somewhere between PJ Harvey and Marilyn Manson, Garbage or even TLC). Surrounded by distortion and heavy drumming, Dupuis' voice sounds as sinister and seductive as ever when she seethes, "Now I'm the god of the liars." Still, even with the extra polish, the songs' fiery immediacy hints at how amazing they'll sound live.

What makes Foil Deer truly crackle is the way Dupuis' words interlock with the band's barreling energy and turn-on-a-dime arrangements. While Speedy Ortiz's wiry guitar lines and knotty melodies are taut enough to get stuck in your ear, Dupuis and her bandmates (guitarist Devin McKnight, bassist Darl Ferm, drummer Mike Falcone) are masterful at building tension that can erupt into noise at any moment. Blurring intricate melody and scruffy cacophony, this lean and arresting sound was first cultivated on the band's 2013 debut, Major Arcana, and then on last year's Real Hair EP. Speedy Ortiz has drawn comparisons to a slew of 1990s grunge and alt-rock touchstones — among them Pavement, Helium and Dinosaur Jr. — but Foil Deer's expansive palette proves that the band is no throwback pastiche. It's on to something new.