Accessibility links
Review: Alabama Shakes, 'Sound & Color' Brittany Howard and her band develop a vision of rock, blues and Southern soul that reaches high but remains practical in its reclamation of what works. 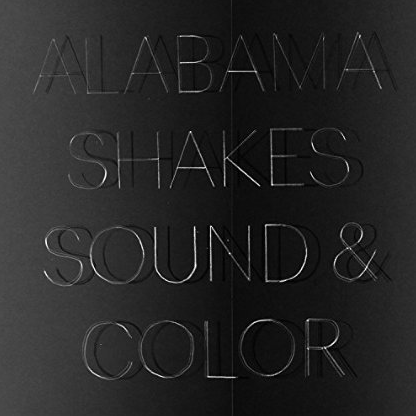 In the six years I've lived in the region, I've developed a mantra: Southern freaks are the best freaks. For me, the word "freak" can be both positive and downright spiritual. It describes serious individualists who are tolerant of others whose own paths may diverge from their own; people whose ways of thinking connect to form an antidote to the deep conventionality that often surrounds them. Southern freaks, like the four young musicians in Alabama Shakes, face multiple challenges: not only the love of tradition (and defensive attitude about it) that their neighbors nurture, but also the prejudices of those who live elsewhere and expect Southerners to be somehow limited by their native surroundings. Southern freaks are the best freaks because they have the resilience to flourish in a home that can feel foreign, while also recognizing that legacies can't be simply processed. They must be lived, confronted and altered from within.

Brittany Howard expresses this more fancifully in "Gemini," the first song the band recorded for its boundary-leaping second album, Sound & Color. "On a planet not so far away, we were born together," she sings, maybe to her lost sister, a lover or a best friend, in a voice that contains shadows of Richmond, Virginia's son, D'Angelo. Howard's imagined pair washes up in Athens, Alabama, "suckled on the honey of the Tennessee," whose wet banks are both adorned with the flower whose name she's playing with and rife with the snakes she mentions in the next verse. The dream Howard spins in "Gemini" could have come from the pen of South Carolina native Dorothy Allison. The thick, expansive bed of druggy funk the band creates to convey it recalls the deepest experiments of Denton, Texas, native Sly Stone. The resonance the band achieves with the help of producer Blake Mills turns the track into serious funk: something George Clinton, born in North Carolina and now living in Tallahassee, would enjoy.

The Southern artists the Shakes evoke throughout Sound & Color are the ones who carried their birthright everywhere — to California, New Jersey, New York, the whole prismatic world. This album, so much more confident and wide-ranging than the band's outstanding 2012 debut Boys & Girls, is not merely Southern rock, any more than the Allman Brothers are merely Southern rock. It's not just a new spin on soul, or even funk, any more than building a world the way Clinton has can be called a spin. It has punk elements, a song called "Shoegaze," punishing heavy-metal chords, and falsetto singing that might make Prince envious. There are love songs like "Miss You," spiked with charming little details, and cosmic adventures like "Future People" and the profane, biblical "Dunes." These songs take their time, stretching time, turning it vertical and sideways through riffs, keyboard lines and rhythms that beg for organic metaphors of river currents and shifting sediment.

But Sound & Color didn't rise from the earth like some swamp thing. (Again, watch out for those Southern stereotypes.) It's a response to history from players who started as record collectors and cover-band guitar slingers, who've absorbed everything from Nina Simone to the Red Hot Chili Peppers as they got better at being themselves. Bassist Zac Cockrell and drummer Steve Johnson have developed a relationship to grooves marked by patience and subtlety. Howard and fellow guitarist Heath Fogg own the power of suggestion, their licks and changes tracing myriad influences while nimbly escaping their weight. The wider scope of the arrangements on Sound & Color — there are strings and vibraphone, and the keyboard enhancements Ben Tanner and Paul Horton provide have grown more complex — make these jams psychedelic, but not in the usual way. These are some of the most well-modulated slow burns you'll ever hear.

Sound & Color shows the strong influence of the rock royals whose hallucinations about the South have demanded responses since the 1960s: Led Zeppelin and the Rolling Stones. As a singer, Howard can deliver any blues or soul cliché with ease — or any rock cliché, for that matter — but her approach is singular. It's punk in its refusal to conform, glam in its theatrical flair, jazz in its self-directed, often unexpected musicality. Alabama-bound pilgrim Mick Jagger had an idea of what it meant like to perform "like a black girl should." Howard and the band of brothers who understand her so well remind us of who was really exiled on rock's main street — brown women, as she's described herself, "everything and nothing" — while developing a vision that reaches high but remains practical in its reclamation of what just plain works. As they grow toward a greatness that does away with others' assumptions, these proud freaks stay grounded. That's what's going to make the Alabama Shakes last.