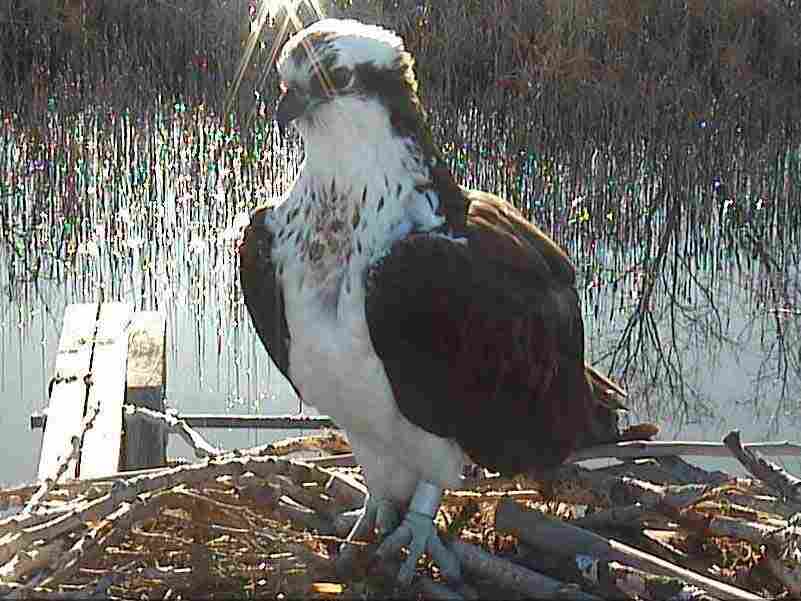 One of the two female ospreys that scuffled over the male on the Boulder County, Colo., nest web cam. Boulder County hide caption 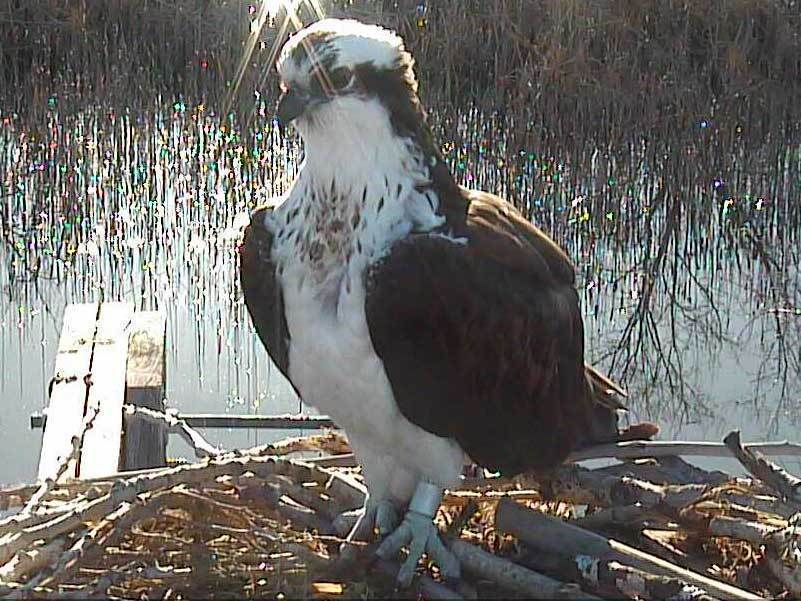 One of the two female ospreys that scuffled over the male on the Boulder County, Colo., nest web cam.

Two females and a male were living in the nest, when a third female arrived and kicked the original female out. Observers said she bonded with the male.

A romantic slight is the bread-and-butter of reality TV programming, and the storyline plays just as well to nest-cam watchers. Since the osprey cam fired up four years ago, Brockman says it's become the most popular page on the county's web site.

Brockman's not the only web specialist to notice those page views. Just like the producers of Big Brother, Survivor and the Real Housewives franchise, local governments and non-profits around the country are beginning to capitalize on our unquenchable thirst for reality programming — in the form of bird nest cams.

So when the camera got zapped by lightning last year, Boulder spent thousands to re-install it.

"It's a good combination ... using technology to see what's going on that you might not be able to see at the ground level, but also raising issues around open space and wildlife preservation," Brockman says.

Preservation is what drew Bob Anderson and the Raptor Resource Project into nest cams more than a decade ago. Today, the bald eagle camera he set up in Decorah, Iowa, is one of the most-watched in the country.

Anderson says regular viewers gain a sense of ownership of the birds.

"Somewhere between 50 hours and 500 hours of watching whatever bird cam blows your dress up, it becomes your birds," he says.

Anderson says everyone from students in classrooms to people with disabilities who can't get outdoors have been tuning in since eaglets appeared recently. He thinks it's the social components make the Decorah camera so popular — an army of volunteers who post pictures and field questions.

Charles Eldermire is the bird cams project leader at the Cornell Lab of Ornithology in New York. His lab hosts six to 10 cameras, depending on the time of the year.

"It's relatively small investment for what might be a very large amount of web traffic," Eldermire says.

The story doesn't end with the cameras, he explains. The live feed appears on a web page with a timeline, frequently asked questions on the species and Facebook links.

"That gives you a great audience to then talk to, about, at least for us, as a nonprofit, what our mission is," Eldermire says.

It's led to teachable moments for the lab's viewing audience around the perils of plastics for the Laysan Albatross.

But Eldermire says a 24/7 live feed of wild creatures can also create awkward situations, like when one nestling is trying to kill another.

"We don't sugar-coat anything, but what we try and do is provide enough information, and in an engaging enough way, that people aren't surprised by what's going to happen, and they know we are thinking of them, as viewers, when we're crafting the environment that they can watch it in," he says.

Eldermire says volunteers are on call at all hours, so if there's an event like death, viewers are notified before they load the nest cam.

In Boulder County, the osprey nest cam has gotten another dose of drama this year. Brockman says once again the nest is the setting for another home-wrecker scenario — with the same two females from last season scuffling over the male and the nest.

"We're just kind of watching and seeing what happens," he says.