Accessibility links
Armenian 'Genocide' Remarks By Pope Francis Spark Row With Turkey The pope continues his theme of outspoken criticism against the complicity of silence of today's world community against the persecution of Christians and other minorities by Islamic extremists.

The pope continues his theme of outspoken criticism against the complicity of silence of today's world community against the persecution of Christians and other minorities by Islamic extremists. 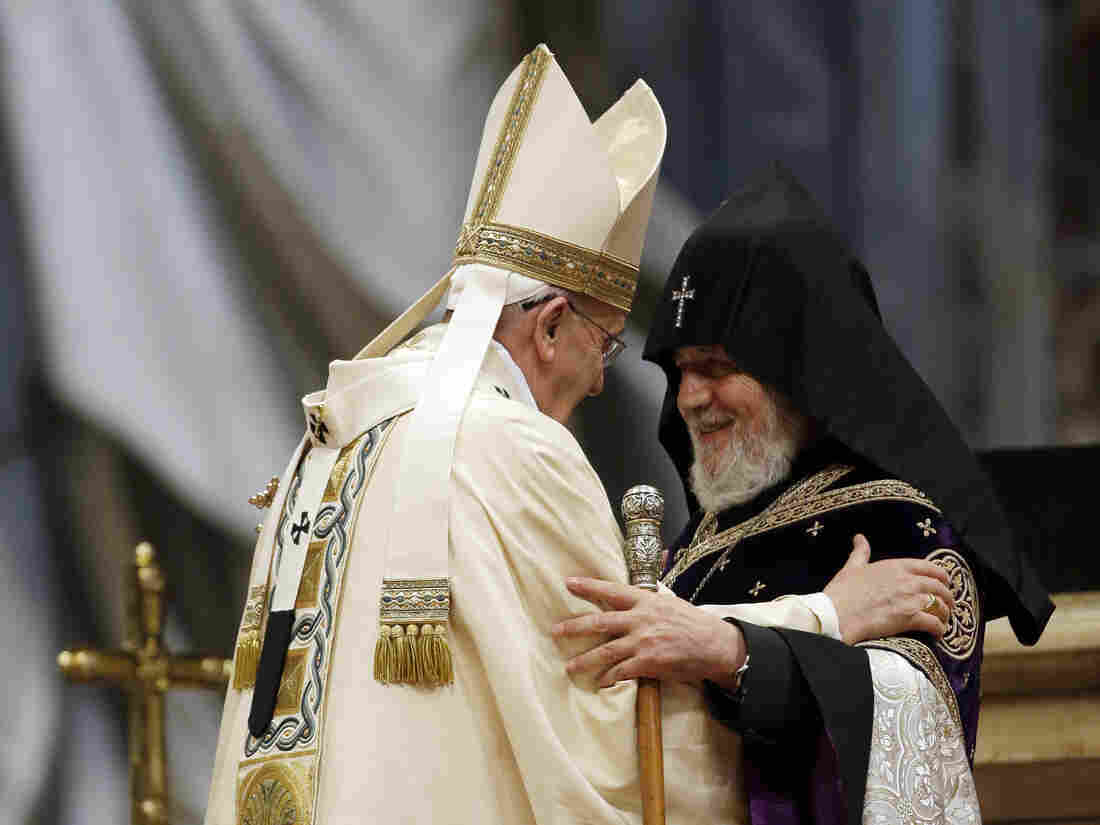 Pope Francis (left) is greeted by the head of Armenia's Orthodox Church, Karekin II, in St. Peter's Basilica at the Vatican. The two met during an Armenian-Rite Mass. Gregorio Borgia/AP hide caption 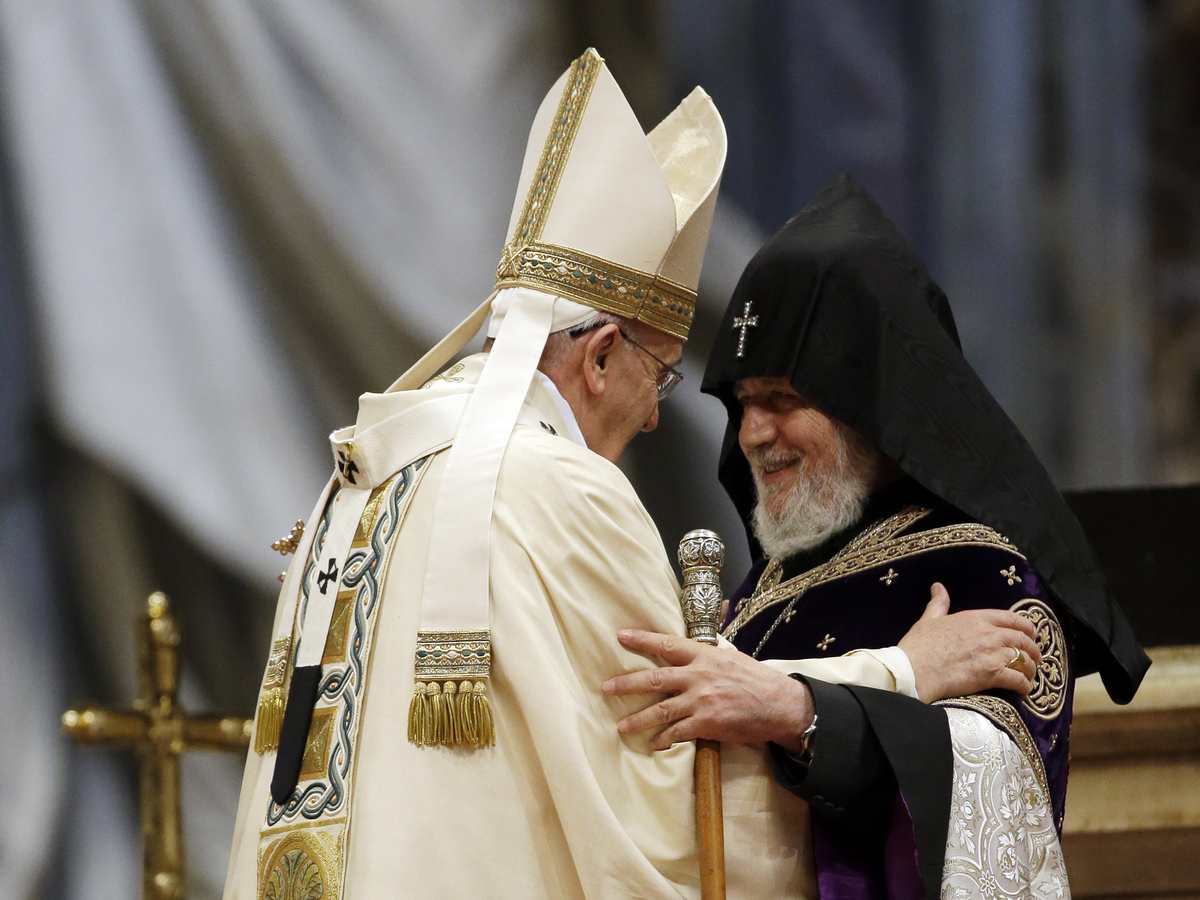 Pope Francis (left) is greeted by the head of Armenia's Orthodox Church, Karekin II, in St. Peter's Basilica at the Vatican. The two met during an Armenian-Rite Mass.

And yesterday, Pope Francis sparked a diplomatic dispute with Turkey. The Pope used the word genocide to describe the deaths of some one-and-a-half million Armenians a century ago by the Ottoman Empire in the early days of World War I. The Pope used the highly charged term during a mass attended by Armenian leaders.

POPE FRANCIS: (Through interpreter) In the past century, our human family has lived through three massive and unprecedented tragedies. The first, which is widely considered the first genocide of the 20th century, struck your own Armenian people, the first Christian nation.

MONTAGNE: Turkey, which emerged from the ashes of the Ottoman Empire, has long rejected the term genocide as applied to Armenians, and it quickly recalled its ambassador to the Vatican. NPR's Sylvia Poggioli joins us on the line from Rome for more. Good morning.

MONTAGNE: Now, when he made this statement, it was in a solemn ceremony in St. Peter's Basilica to mark the 100th anniversary of that slaughter. When Pope Francis visited Turkey just last November, he did not speak of the Armenians, but he does seem to feel very strongly about this.

POGGIOLI: Well, he sees the Armenian genocide as a harbinger of today's persecution of Christians in the Middle East. It's one of his biggest concerns. He's denounced what he calls the complicit silence of the world community in the face of the modern-day slaughter of Christians and other minorities. Yesterday, he described the Armenian massacre as senseless slaughter followed by Nazism and Stalinism and other mass killings. He cited Cambodia, Rwanda, Burundi and Bosnia. It's necessary and indeed a duty, he said, to honor the memory of the Armenian victims for whenever memory fades. It means that evil allows wounds to fester. He added that today, too, we are experiencing a sort of genocide created by general and collective indifference. He spoke of Christians publicly and ruthlessly put to death, decapitated, crucified, burned alive or forced to leave their homeland.

MONTAGNE: And Turkey reacted very strongly to the pope's words. Here is the Turkish prime minister accusing the pope of inciting hatred.

PRIME MINISTER AHMET DAVUTOGLU: (Through interpreter) We expect religious leaders to call for peace and to stay away from Islamophobic and anti-Islamic attitudes that prevail in Europe.

POGGIOLI: And the foreign ministry said the pope's remarks are controversial in every aspect based on prejudice, which distorts history and reduces the pain suffered in Anatolia to members of just one religion. Turkey accepts that many Christian Armenians died in clashes with soldiers when they were part of the Ottoman Empire, but claims the numbers are inflated and rejects the genocide label. Several European countries officially recognize the massacres as genocide. The United States does not.

MONTAGNE: And, Sylvia, has Pope Francis undermined the Catholic Church dialogue with Islam - something that he did promote in his trip to Turkey?

POGGIOLI: It's too soon to say, but he knows what's at stake and that his words would antagonize the Turkish government. Francis is known for taking political risks. For example, he helped pave the way to the U.S.-Cuba detente and intervened in 2013 to prevent Western military strikes against the Assad regime in Syria. This is a pope who's not afraid of provocation on issues he considers of utmost importance. And at the end of yesterday's ceremony, he made an appeal to heads of state in international organizations to recognize the truth of what happened a hundred years ago without seeding, he said, to ambiguity or compromise. And he urged reconciliation between Turkey and Armenia.

MONTAGNE: Sylvia, thanks very much.

MONTAGNE: That's NPR's Sylvia Poggioli speaking to us from Rome.