Accessibility links
Book Review: 'A Crown For Cold Silver' By Alex Marshall Alex Marshall (a pseudonym for an established author taking an epic new path) creates a memorable heroine in Cobalt Zosia, a retired general who's drawn back into blood and struggle against her will. 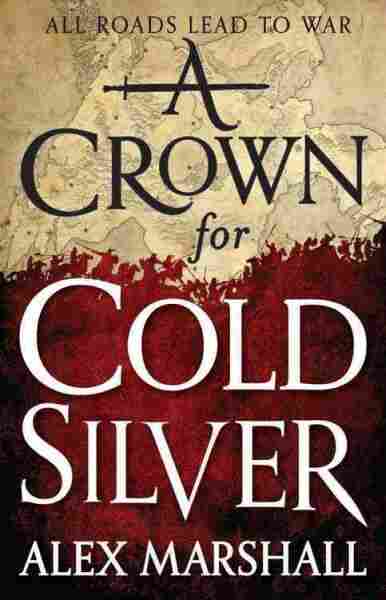 A Crown for Cold Silver

Early in A Crown for Cold Silver — the debut novel by Alex Marshall (a pseudonym for an established author striking off in an epic new direction) — an old woman's battle scars are mistaken for matronly wrinkles. It's a tiny detail, but it speaks volumes. In Marshall's fictional, vaguely medieval world, Cobalt Zosia is a legendary retired general who once led her fearsome Five Villains to victory in a land rife with injustice, mostly of the haves-and-have-nots variety. Now in hiding with her husband, the mayor of a rural town, the elderly Zosia is yanked back into the machinations of blood, treasure and empire when her village falls under the swords of a band of marauders — part of an army Zosia thought she'd made her peace with decades ago.

It isn't the most original setup for the first book of an epic fantasy series — with the exception being Zosia herself. There's been a lot of conversation lately about the need for greater diversity in speculative fiction, and much of that has been centered on race and gender. Age doesn't get mentioned as much. Marshall boldly, brilliantly places Zosia at the center of a sprawling conflict in which her age — as represented by all those scars mistaken for wrinkles — not only makes for a complex, compelling character, but one who carries far more baggage than your average 20- or 30-something fantasy hero.

That's not to say A Crown for Cold Silver doesn't make other statements about diversity. In Marshall's world, same-sex couples can and do rule kingdoms. Gender-fluid warriors fight alongside aristocratic fops and bisexual barbarians. The troublesome Eurocentricity of epic fantasy is subverted, as the book revolves around a wide array of races and cultures that each possess a distinct balance of nobility and corruption. None of it is played for novelty. Marshall's rich cast of characters — including the remnants of Zosia's Five Villains, whom she tries to conscript into her latest vengeful crusade — are driven by passion, duty and humanizing, terrifying flaws.

As with any great fantasy — and A Crown for Cold Silver is one — people both simple and extraordinary are snared in a web of oaths, feuds, allegiances, betrayals, ambitions, legacies, faiths, cultures, compulsions and lusts. The easy point of reference is George R.R. Martin's A Song of Ice and Fire, but Marshall's voice and vision bears a much closer resemblance to another popular contemporary fantasy author: Joe Abercrombie, whose novels mix gallows humor and intricate plotting with murky moral grays. A Crown for Cold Silver is hard-edged, but it's nowhere near stark. For every string of profanity, bawdiness and violence, there's a stretch of hearty banter mixed with sly philosophical musings. It's a vibrant book, and a generously lush one.

Still, A Crown for Cold Silver revels in its subversion, and Marshall's greatest strength is in making that subversion cut both ways. In one of the book's most powerful scenes, a young boy from Zosia's village — the only survivor of the massacre that sets her on a path to destiny — seeks out the old woman. His wounds are agonizing, but she tends to them and does her brusque best to soothe him. When he asks her if he's going to die, she responds with the timeworn tale of an orphaned farm boy who's destined to become a great hero. Reassured for a time, the boy dies quietly in the night.

The scene pokes cruel fun at the Campbellian hero's journey that so much clichéd fantasy is based on, but Marshall is simultaneously tender and reverent. It's a virtuoso move, one that shows just how much heart and thought lurk beneath the book's savagery and bleakness. A Crown for Cold Silver drags epic fantasy through the mud — but it does so with wit, wonder and wisdom.

Editor's note: An earlier version of this piece said that Alex Marshall was rumored to be a pseudonym. It is, in fact, a pseudonym.