Accessibility links
The Challenges Of War At A Distance The new film Good Kill is a little too blunt in its treatment of drone warfare, but strong work from Ethan Hawke as a troubled pilot helps it along.

The Challenges Of War At A Distance

The Challenges Of War At A Distance 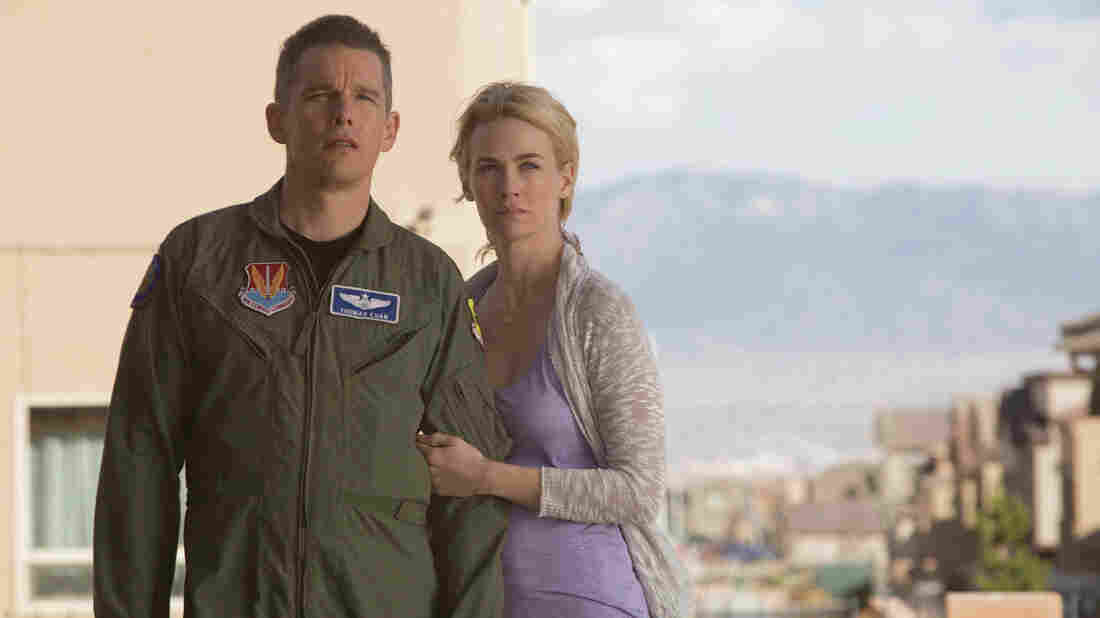 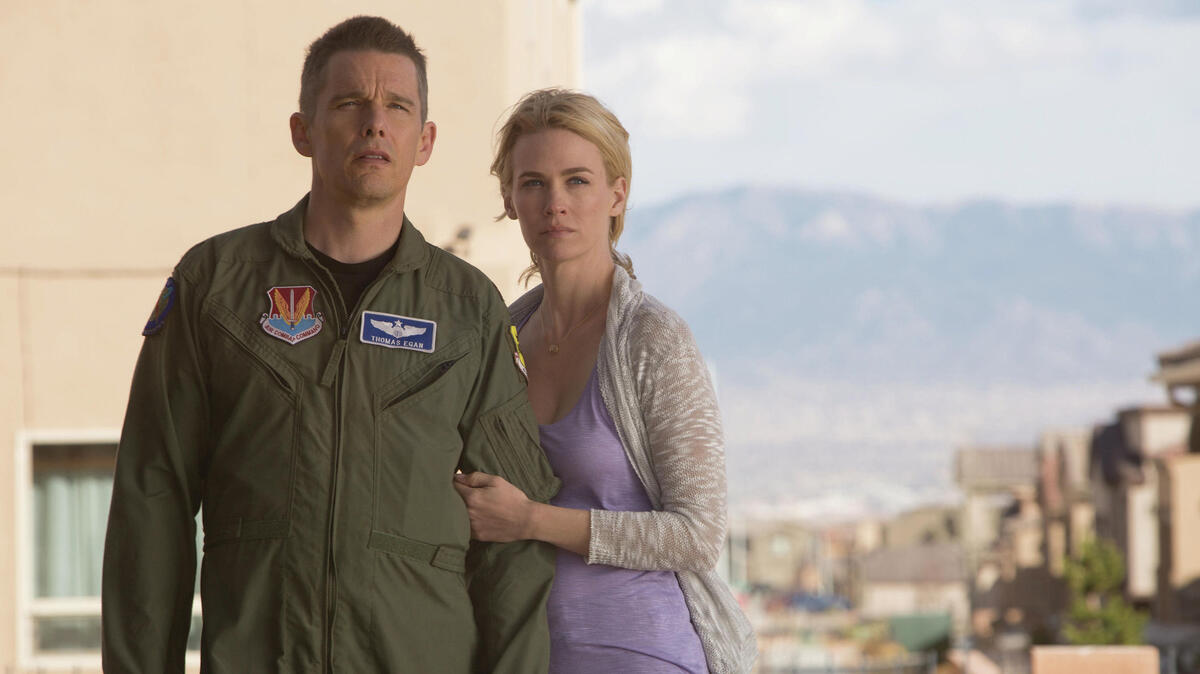 The opening moments of Good Kill, a new drama starring Ethan Hawke and written and directed by Andrew Niccol (who also directed Hawke in Gattaca), almost eerily resemble the opening moments of American Sniper. A man watches and tries to interpret the movements of a woman and child who don't see him, deciding whether to kill them. This man, however, isn't concealed nearby. The woman and child are in Afghanistan and the man is piloting a drone from an air conditioned trailer on a military base in Nevada.

U.S. Air Force Major Tom Egan (Hawke) used to fly planes. He'd like to be in the cockpit again. But he's been assigned to sit in a trailer and pilot drones for a variety of purposes: sometimes he's doing surveillance, sometimes he's carrying out a strike on a particular target and sometimes he's watching over American soldiers so they can get some sleep. He gets to go home at the end of the day to his wife (January Jones) and daughter (Sachie Capitani), to a little house with a little blob of lawn where he can barbecue. But he's miserable, and he's at his boss (Bruce Greenwood) to get him back in an actual plane. When the CIA gets involved and begins asking Tom to carry out different missions, things only get worse.

Niccol is working from a great knot of ideas here: the way it's affecting Tom to essentially engage in combat without risk to himself; the specific tactics he's asked to use; whether it's fair for a person with a family to voluntarily return to combat because he's miserable; the difference between war to the military and war to the CIA; what happens when drone surveillance turns up something you weren't expecting that it's not your job to address; the endlessness of war. There's plenty going on. And Hawke is solid, giving Tom's twitchy ambivalence an air of unsettling disconnection.

Unfortunately, in a lot of places, Niccol's script lets Hawke down. The generic dialogue given to Greenwood's military boss is frequently awful, and Tom's colleagues (including Zoë Kravitz as his new young ... virtual co-pilot, sort of) are asked to have fights in which they lay out arguments for and against drone strikes in blunt terms that wind up sounding like a feisty Internet comment thread. Niccol is grappling with some great questions, but the film would be much stronger if they were allowed to arise from events (as they naturally do) without the hammering reinforcement of the characters' public policy shouting matches.

The domestic stuff with January Jones is very good, though. She makes Tom's wife Molly sympathetic and significant but not saintly, and a scene in which he finally opens up to her is simple enough to be a heart breaker. Hawke and Jones do some terrific work together that begs for a more complete film and a more polished script.

Niccol's visual motif of choice is the view of a target as Tom sees it on his screen: distant, sometimes shaky or blurry, intrinsically limited and limiting. There are also frequent shots of Tommy's house and car seen the same way: from above. Niccol seems to concentrate his own argument about drone strikes in the counting of seconds between the weapon being fired from thousands of feet in the air and the soundless explosion: the moments that pass when the person Tom is watching is dead though he doesn't know it yet. In that technique, and in that choice of focus, lies the film's greatest strength, which is simply the ability to take an often abstract-sounding concept from the news and give it a sensory dimension. As an attempt to educate and argue about drone strikes, Good Kill is a little too transparent for its own good, but as an attempt to give an audience an image to carry away of what it means to use this tactic in war and what some of the costs are, it's quite successful.

"Good Kill" is playing at the Tribeca Film Festival and will be released in theaters on May 15.