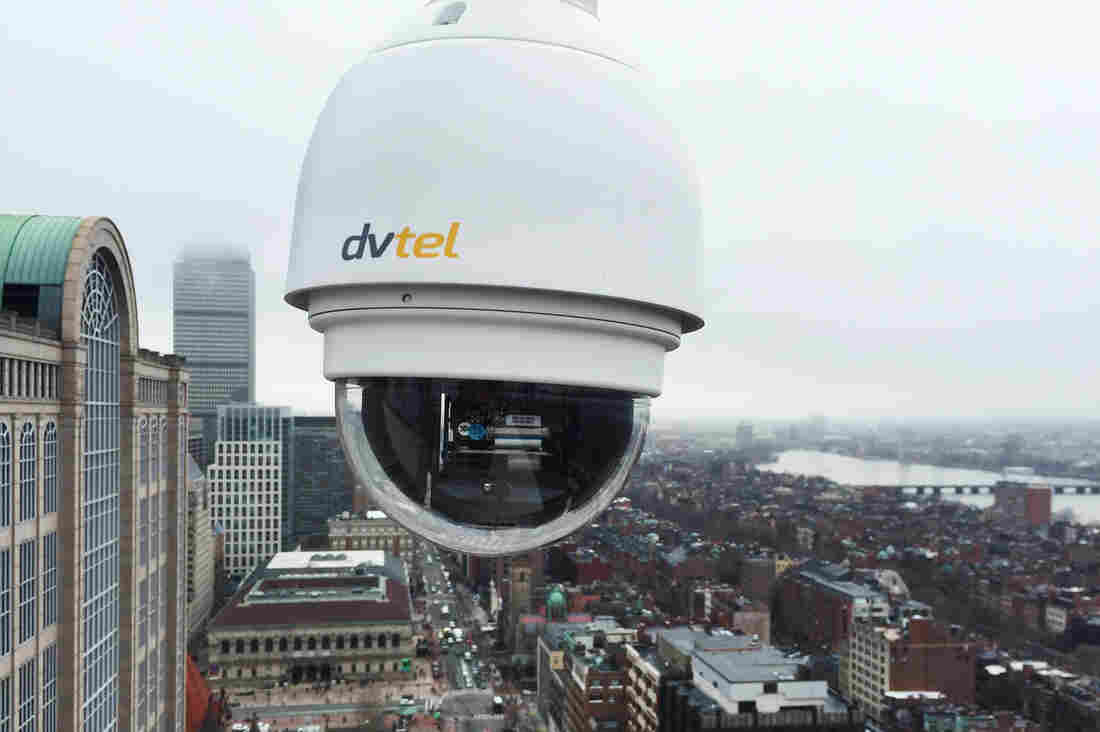 Temporary video cameras have been installed along the route of the Boston Marathon. Some will become a permanent part of the city's surveillance network after the race is over. Curt Nickisch/WBUR hide caption 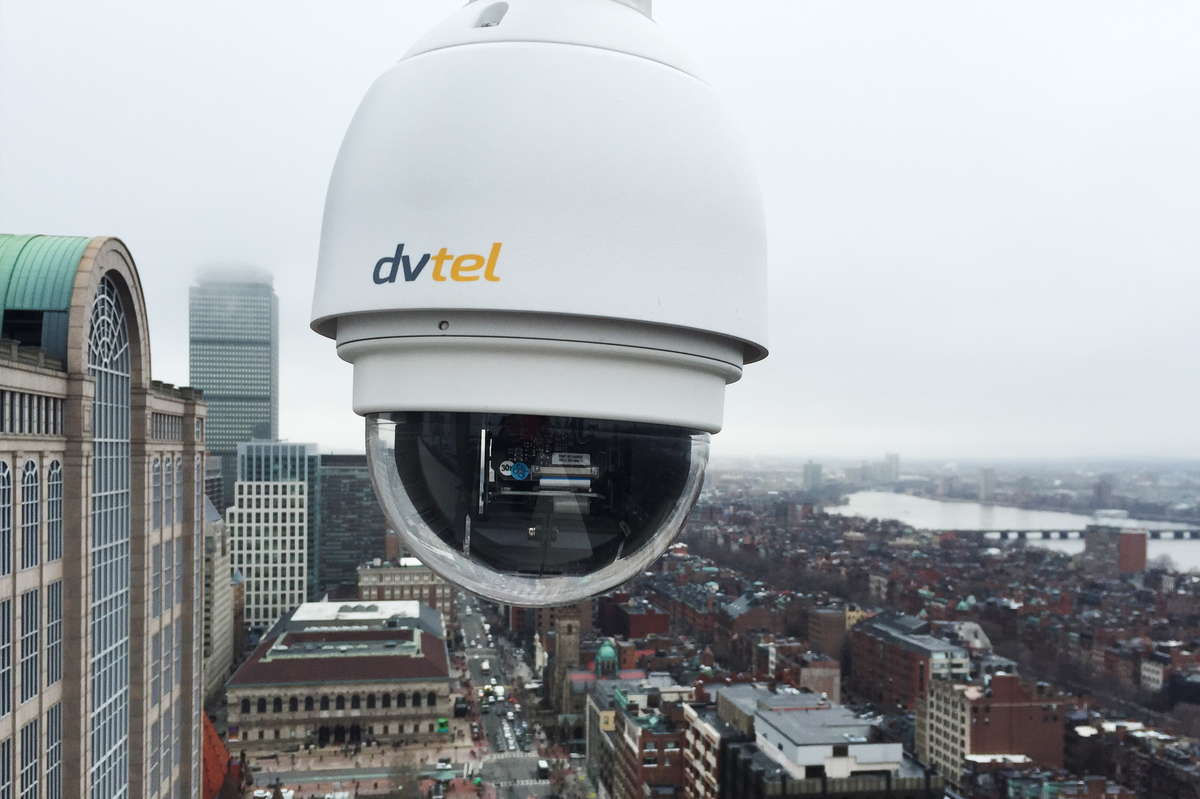 Temporary video cameras have been installed along the route of the Boston Marathon. Some will become a permanent part of the city's surveillance network after the race is over.

Nearly a million people will line the streets to watch the Boston Marathon on Monday, and someone else will be watching them. Bill Ridge with the Boston Police says video surveillance is a big part of the security plan.

"We've got a lot of cameras out there," he says. "We're going to be watching the portions in Boston — particularly the routes along Boylston Street, the finish line."

That's the area where two bombs detonated two years ago. Video footage helped identify the terrorists, and the number and quality of video cameras has gone up since then.

On the roof of a tall office building overlooking the marathon finish line, worker Mark Savage is installing a high-definition video camera. 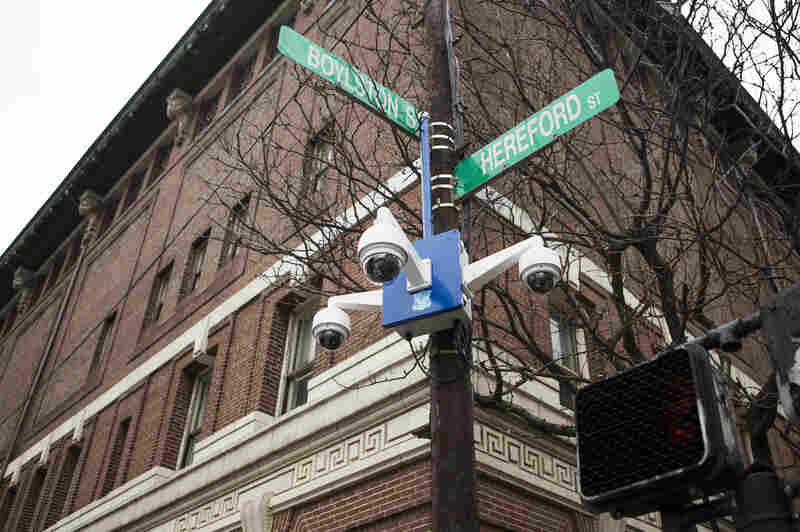 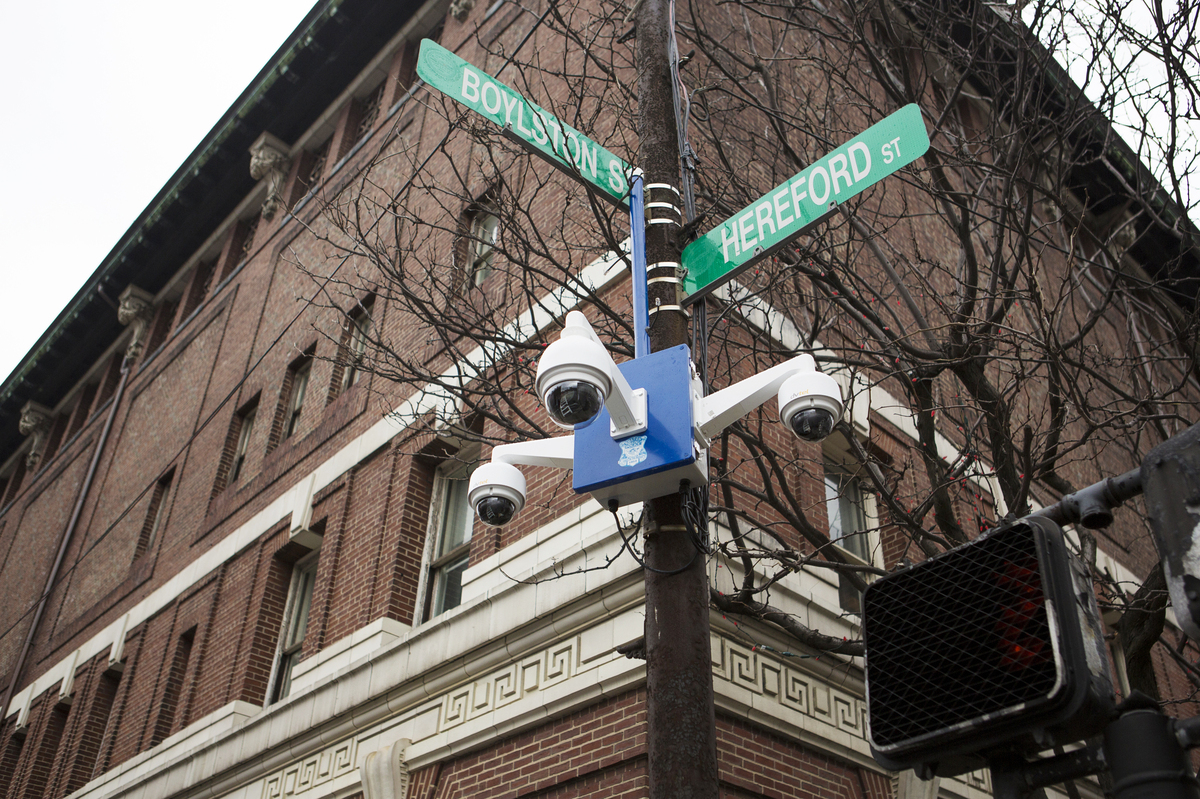 Savage works for Lan-Tel Communications, a Massachusetts company contracting for Boston Police and marathon organizers. At the company's office, workers link the cameras into the computer network while project manager Eric Johnson demonstrates that police can remotely watch feeds from and control the cameras.

"I'm zooming in on the infield of Fenway Park," he says while maneuvering a camera. He uses a laptop to swivel and zoom the HD video camera on a building hundreds of yards away from the ballpark. The zoom is so powerful, Johnson says it could probably tell whether a Red Sox pitcher has thrown a strike or a ball.

In the same way that televisions have gotten higher resolutions through the years, so have video cameras — and Johnson says cheaper bandwidth and data storage make it easy to record more, better-quality video.

There's a lot they can do: Boston has programmed cameras to automatically turn toward the sound of gunshots. Johnson says that soon, the software system could alert police when crowds form, or when a certain suspect is recognized by a camera.

"They are not in every neighborhood," he says. "But I, I think they should be."

Kade Crockford of the American Civil Liberties Union of Massachusetts says she understands the need for surveillance at a big public event like the Boston Marathon — but objects to expanding its use. While standing outside the Old State House, she points out four different surveillance cameras catching her every move.

"[A big event] doesn't trigger privacy concerns," she says. "What does trigger privacy concerns is the City of Boston installing a network of cameras — some in residential neighborhoods — that enable law enforcement to track individual people from the moment that we leave our homes in the morning until the moment we return at night, seeing basically everywhere we went and everything that we did."

Boston Police won't say how many cameras are already in the city's network, or how many new ones are going up for the marathon. But some of them will stay online afterward.

Ed Davis, a former Boston police commissioner, points to a picture inside his office. It was taken as the first bomb went off at the 2013 marathon. He says dramatic video footage was crucial to winning a guilty verdict.

"In my mind, the debate is pretty much past now," he says. "The cat's out of the bag. The video exists. The question now is, how do we protect people's rights in the everyday application of the technology that's already out on the street?"

Davis says the answer is to be vigilant. In Boston, the city that runs a marathon on Patriots' Day, commemorating the opening battles of the American Revolution, the right balance between public security and personal liberty is an ongoing search.