Accessibility links
Not My Job: Boston's Dick Flavin Is Quizzed On The 'Worst Poet Ever' Dick Flavin is an Emmy-award winning broadcaster, a PA announcer at Fenway Park and the Poet Laureate of the Boston Red Sox. 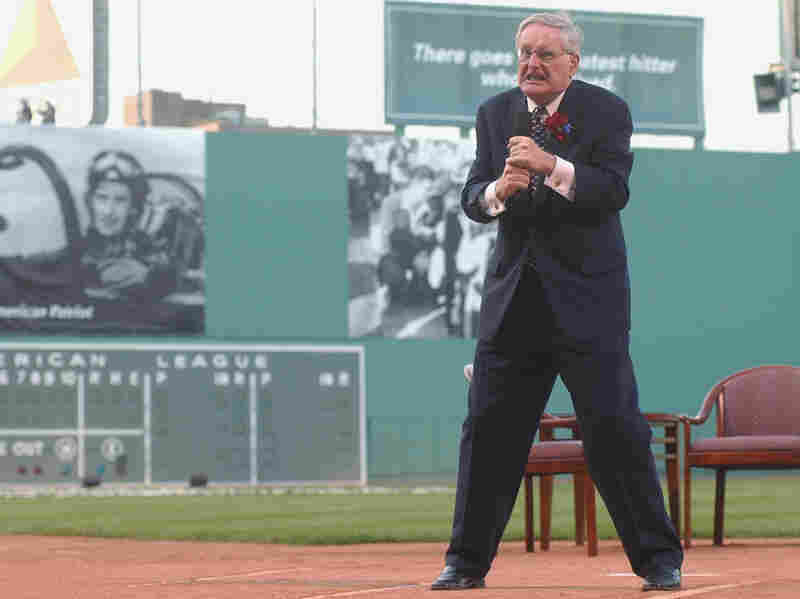 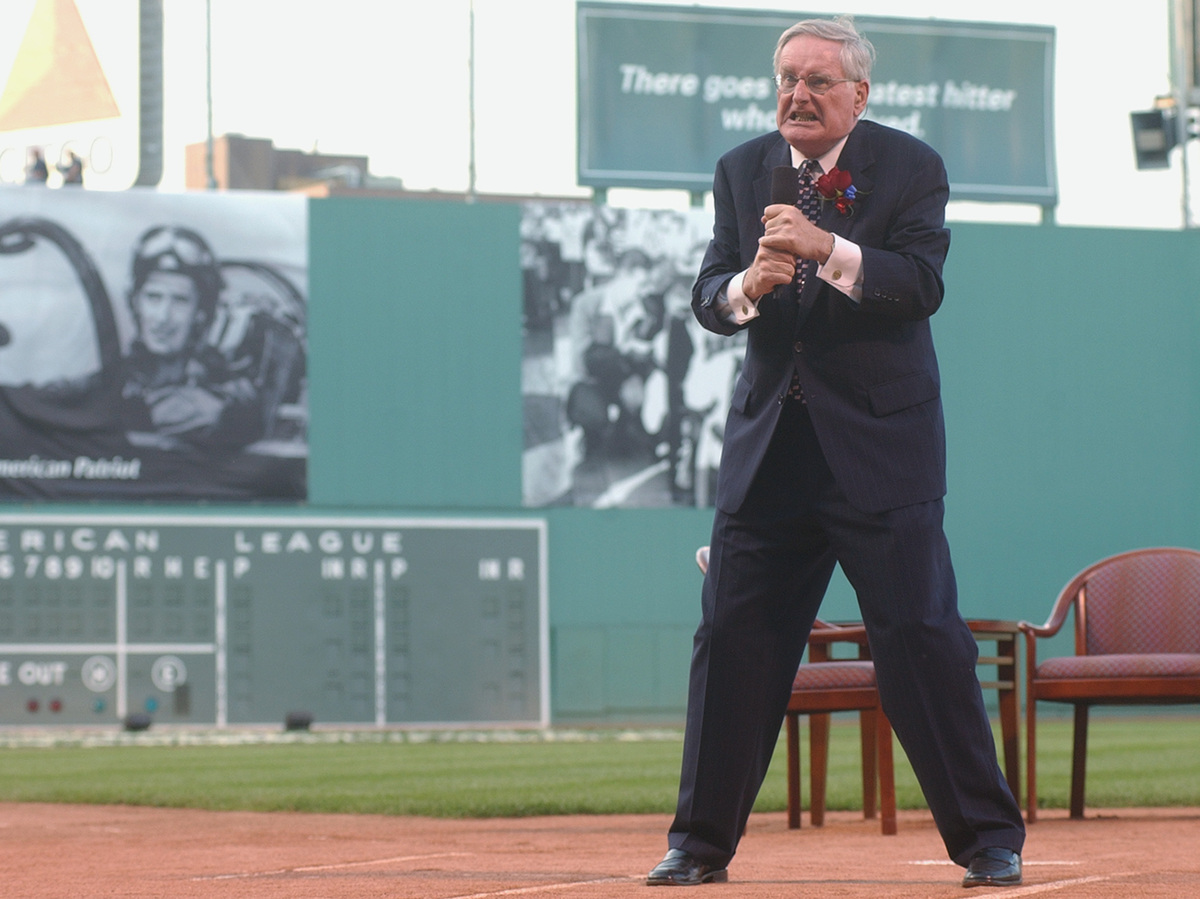 Humorist and Boston Red Sox Poet Laureate Dick Flavin recites "Teddy at the Bat" during the Ted Williams tribute on July 22, 2002 at Fenway Park in Boston.

Everybody knows the Boston Red Sox are unique — in that they have the most pretentious, literary fans in all of baseball. Sure, the Yankees may have more World Championships, but only Red Sox fans routinely compare their team to the tragic heroes of Greek Drama.

So it's fitting that they have an official poet. Dick Flavin is an Emmy-award winning broadcaster, a PA announcer at Fenway Park, and, yes, the Poet Laureate of the Boston Red Sox.

Flavin is of course, an excellent poet, so in a game called "The worst poet in the entire world," he is being asked about his opposite, William McGonnagal, who in the 19th Century was widely hailed as the worst poet alive.

And now the game where we ask somebody who has a particular skill to do something that calls on that skill not at all. It's called Not My Job. Everybody knows that the Boston Red Sox are unique in that they have the most pretentious literary fans in all of baseball.

SAGAL: So it's fitting that they have an official poet. Dick Flavin is an Emmy award-winning broadcaster. He is the daytime PA announcer at Fenway Park. And yes, he is the poet laureate of the Boston Red Sox. Dick Flavin, welcome to WAIT WAIT ...DON'T TELL ME.

SAGAL: So, first of all, just to - you are the official poet laureate of the Boston Red Sox.

SAGAL: So if I pick up, you know, the media guide that lists everybody in the back - in the front office...

FLAVIN: Well, way towards the back.

FLAVIN: I'm the PA announcer for the day games.

SAGAL: OK. And so how long have you been doing that?

FLAVIN: I have been doing that for about three years now.

SAGAL: Three years. How did you get the job of PA announcer?

FLAVIN: The guy before me died.

SAGAL: Now people are sometimes confused. They think you're the play-by-play announcer. That's not right.

SAGAL: So what does the PA announcer do?

FLAVIN: The PA announcer says who's coming up to bat, and that's it.

SAGAL: So give us a sample of your announcing style.

FLAVIN: No, I play it straight down the middle.

SAGAL: Really? You're not too excited for the Red Sox?

SAGAL: Even with the Yankees you're not like a little mean?

FLAVIN: You know, the Yankees - I've rooted against them all my life. All my life. I've been going to Fenway Park for 70 years.

FLAVIN: And they've always had players that you have to like.

FAITH SALIE: But even - didn't you even once just say (French accent) Derek Jeter just for kicks?

FLAVIN: He's one of the players you had to like. And you go back to Yogi Berra. How could you not like Yogi Berra?

SAGAL: All right, you make a good point.

SAGAL: I have a counterargument. Alex Rodriguez.

FLAVIN: The exception of proves the rule.

SAGAL: All right. So you write poems about the Red Sox and you perform them at Fenway Park on occasion. And just - we have a sample of your work. We asked you to read a poem that you wrote about one of the Red Sox most famous players, a Hall of Famer Carl Yastrzemski.

FLAVIN: Carl Yastrzemski, he wore number eight. In the bat, in the field and at bat, my God he was great. For 23 years he carried the load. A player like that deserves his own ode. But here is the rub, Yastrzemski won't rhyme with any word I've been able to find. I've lain awake nights, I've done the research, but found not one rhyme. I am left in the lurch. There just is no rhyme to go with Yastrzemski, and take that from one who has made the attemptski.

FLAVIN: You don't have to be shameless to do this stuff, but it helps a lot.

SALIE: Dick, you've seen so many highs and lows with the Red Sox. In all of your years, what is the most emotional you've ever been about the team?

FLAVIN: The most emotional I've ever been?

SAGAL: Now that's a true Red Sox fan, 'cause I remember that.

FLAVIN: I thought it was over. I thought I was going to die. That I was never going to...

FLAVIN: No, but I didn't read a newspaper for a week.

SAGAL: Really? Now you're telling me this was 2003, they got to the seventh game of the American League Championship Series. All they had to do was win the game, they're off to the World Series. That was worse than say 1986 with the famous Mookie Wilson, Bucky Dent play?

FLAVIN: Well, you know, for me it was. For a friend of mine once said after the 1986 World Series with the - Buckner's legs - the bastards killed my father and now they're coming after me.

SAGAL: But what's interesting to me is Faith just asked you about your most emotional moment and you picked a moment of devastation rather than the thrill and glory of the following year.

SAGAL: Well, Dick Flavin, we have asked you here to play a game we're calling...

BILL KURTIS, BYLINE: The Worst Poet In The Entire World.

SAGAL: Since you are, of course, an excellent poet, we thought it would be a nice instance to ask you about something you don't know about - your opposite. William McGonagall, who in the 19th century was widely hailed as the worst poet alive. We're going to ask you three questions about Mr. McGonagall, and if you get two right, you'll win our prize for one of our listeners - the great lyric voice of Carl Kasell on their voicemail. Bill, who is Dick Flavin playing for?

SAGAL: Probably a Red Sox fan. Dick, here's your first question. Before William McGonagall became a terrible poet, he was an awful actor. At one performance in the title role of "Macbeth," he did what? A, he forgot his lines so he just started shouting Scottish stuff, Scottish stuff; B, he refused to die in the end as Shakespeare's script calls for; C, he kept responding to the other actors by saying, no, say the line like this and then he'd repeat it. Which is your choice?

SAGAL: No, actually it was B. He refused to die in the end.

SAGAL: Traditionally, "Macbeth" is killed by MacDuff, but he decided the actor playing MacDuff was upstaging him, so he refused to lose the sword fight. So he like, he quit acting and one day he says he was inspired to become a poet, so he spent the rest of his career doing that. His poetic works were eventually, at the end of his life, collected into a series of books called what? Was it A, "Poetic Gems, More Poetic Gems, Still More Poetic Gems, Yet More Poetic Gems, Further Poetic Gems, And Yet Further Poetic Gems"; was it B, "Bad Poetry, Even Worse Poetry, The Very Worst Poetry Ever, And We Were Wrong, This Is Even Worse Than The Last One"; or C, "The Sickness In My Heart, The Disease In My Liver, And The Plague Affecting My Spleen"?

Last question. Despite his total lack of talent, Mr. McGonagall did manage to make a living with his poetry. How? Was it A, he set himself up on a street corner with a sign reading, immortal ode to you, two shillings; B, he asked people to donate money, and if he got enough, he wouldn't publish his next book; Or C, he would read his poems aloud at a circus while the crowd pelted him with quote, "eggs, flour, herrings, potatoes and stale bread."

SAGAL: You're going to go to A, the street sign reading immortal ode to you, two shillings? It was Cthis time. We mix them up.

SAGAL: He got paid 15 shillings a night to read his poetry while people threw garbage at him. It's the herrings that get me. I could take the potatoes and stale bread, and I have, but it's the herrings.

Now I know you are all dying after this to hear some of the work of Mr. McGonagall. Here is the conclusion of his most famous poem, which is about the collapse of a famous bridge in Scotland. This is the conclusion.

FLAVIN: It sounded like it was about the Red Sox.

SAGAL: Yeah, I know. Bill, how did Dick Flavin do on our quiz?

KURTIS: Dick just passed the audition to be announcer for the Chicago Cubs.

SAGAL: Oh and three. We'll get them next year Dick. Dick Flavin is the PA announcer at Fenway Park, and the official poet laureate of Boston Red Sox. His book "Red Sox Rhymes" will be published in July. Dick Flavin, thank you so much for joining us.

SAGAL: In just a minute, Bill reveals the shame of Finland in the Listener Limerick Challenge. Call 1-888-WAIT-WAIT to join us on the air. We'll be back in a minute with more of WAIT WAIT ...DON'T TELL ME from NPR.