Accessibility links
Review: Mew, '+-' Six years after its last full-length album, the Danish progressive-pop band has morphed again, this time into a more streamlined, potent, startlingly evolved version of itself. 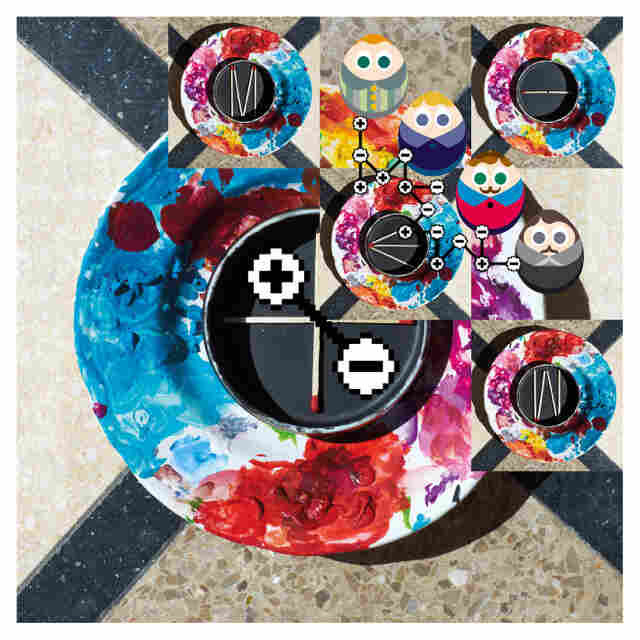 +- Courtesy of the artist hide caption

"In your chrysalis I go," croons Jonas Bjerre, the elf-voiced frontman of Denmark's Mew, in the soaring song "Interview The Girls." It's one of the standout tracks on the group's sixth album, cryptically titled +-, and Bjerre's poetic verse is symbolic of the disc as a whole: Six years after Mew's last full-length, No More Stories..., the progressive-pop band has morphed again, this time into a more streamlined, potent, startlingly evolved version of itself. Riffs still rise and melodies still swell, but there's haunting spaciousness at the heart of the album that's as heart-stopping as a time-lapse film of a butterfly's transformation.

Grandiosity is the name of Mew's game, and +- doesn't forget it for a second. The bulk of the album is a mix of cascading anthems and cosmic pop that recalls vintage prog — think Peter Gabriel's time with Genesis — as well as the shoegazing sumptuousness of My Bloody Valentine. It shouldn't be an easy fit, but in +-'s "Satellite," Bjerre makes it sound effortless. He sings angelically of distance and loss, sounding like Sigur Rós' Jon Thor Birgisson channeling Yes' Jon Anderson, and his keyboards ping and echo majestically against the cloudlike bursts of guitarist Bo Madsen.

But just when it seems like all that preciousness might evaporate into the ether, bassist Johan Wohlert and drummer Silas Utke Graae Jorgensen lock into a propulsive groove that grounds Mew's atmospheric tendencies. The formula is one Mew has used for years, but the return of Wohlert after an extended absence (he took a leave prior to No More Stories... in order to start a family) has reinvigorated the band. In "Witness," Mew dispenses with intros and interludes altogether, instead cranking up the galloping intensity from the get-go — without sacrificing any of the lush melodrama for which the band refreshingly refuses to apologize.

In the past, Mew has enlisted guest stars such as alt-rock hero J. Mascis of Dinosaur Jr. and eminent jazz saxophonist Steve Coleman. Here, Russell Lissack of the British post-punk band Bloc Party chips in his songwriting and guitar-playing skills; in "My Complications," his angular attack lends an urgency to Mew's tuneful, airy melancholy. In "The Night Believer," Bjerre duets with New Zealand pop star Kimbra, their eerily similar voices stalking and then melting into one another. The result is a study in symphonic, otherworldly heartache, neatly concentrated into a four-minute pop gem.

It's on +-'s most sprawling songs, though, that the band's wide-angle vision best shines. The album ends with its two longest tracks: the seven-and-a-half-minute "Cross The River On Your Own" and the nearly 11-minute "Rows." The former is a drifting, ghostly throwback to the post-adolescent angst of Mew's early work, which is a good thing; with all of Bjerre's coded, dreamy mystique, a little emotional directness goes a long way. "Rows" is another matter entirely. With epic scope and an orchestral structure to match, the song billows and builds into a gorgeous meltdown of celestial proportions. "Draw for me a rainbow / to signify loving eyes," Bjerre sings as if he's drowning in a sea of absence and sadness. It took two decades as a band, but Bjerre and company, intentionally or not, finally composed their answer to Pink Floyd's "Wish You Were Here." The sound of thunder that Mew displays on +- may be a delicate one, but it's not less profound because of it.