Accessibility links
National Guard Seeks New Mission After War Indiana's National Guard is fighting to stay relevant after the base has quieted dramatically now that troops have come home from the wars in Iraq and Afghanistan. 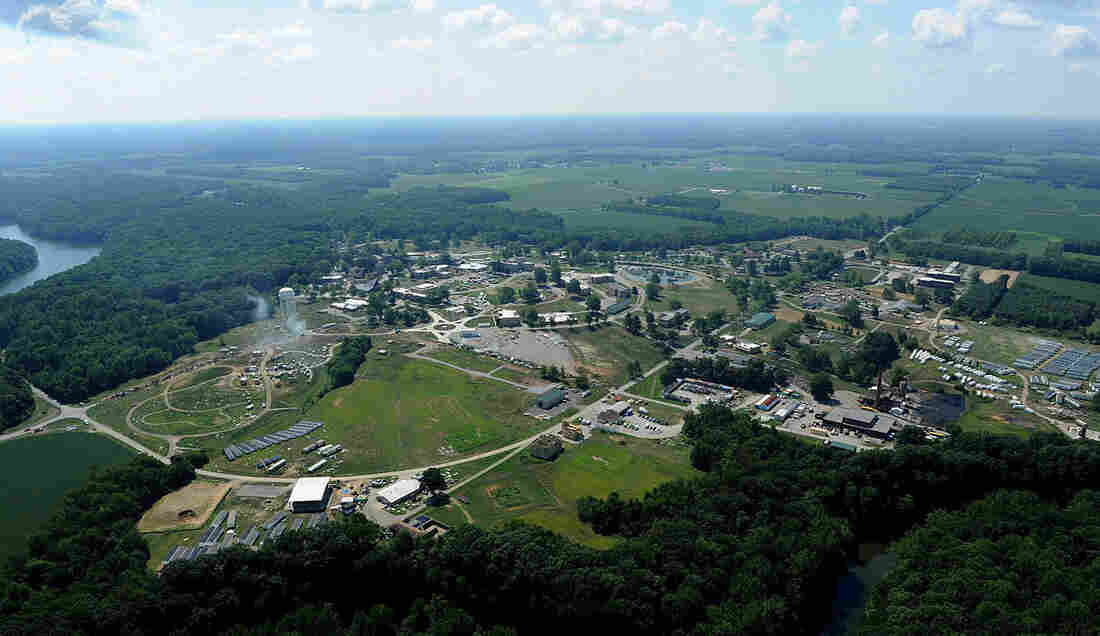 The Army spent $300 million to upgrade Camp Atterbury and the Muscatatuck Urban Training Center — seen here in this aerial photo from 2012 — for Indiana's National Guard to use to prepare for the wars and Iraq and Afghanistan. But now that troops are coming home, the Guard is looking for new ways to keep the base relevant. Sgt. Ashley Reed/Wikimedia Commons hide caption 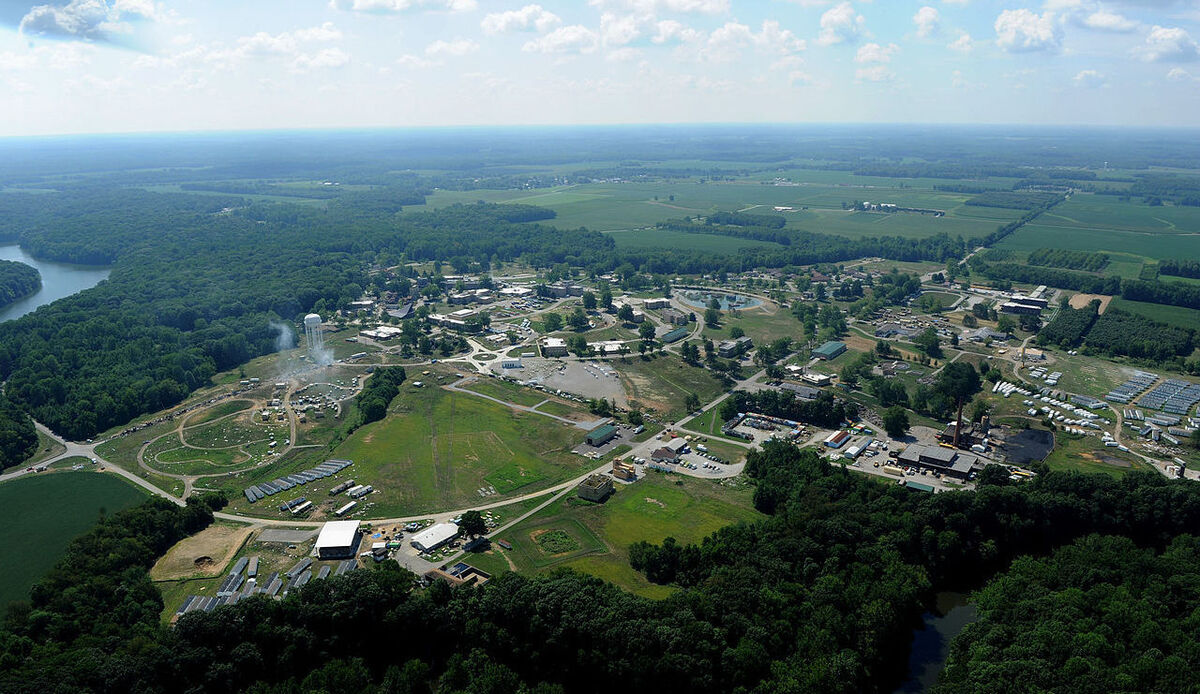 The Army spent $300 million to upgrade Camp Atterbury and the Muscatatuck Urban Training Center — seen here in this aerial photo from 2012 — for Indiana's National Guard to use to prepare for the wars and Iraq and Afghanistan. But now that troops are coming home, the Guard is looking for new ways to keep the base relevant.

NPR — along with seven public radio stations around the country — is chronicling the lives of America's troops where they live. We're calling the project "Back at Base." This is the first of four reports this week about the National Guard.

The Army spent billions of dollars getting the National Guard ready for the wars in Iraq and Afghanistan. But now that the money has been spent and troops are coming home, there are questions about the Guard's mission.

One place the Guard is fighting to prove its worth is at Camp Atterbury — home to the Indiana National Guard.

Carved out of the cornfields and forests of southern Indiana, Camp Atterbury has been training troops since 1942. It became a quiet National Guard base and didn't see much action from the Army after the end of the Korean War.

"I wouldn't call it Sleepy Hollow, but was a kind of a regional training area," says Adjutant Gen. R. Martin Umbarger. When he's not in uniform, he runs the family feed business, but most days he oversees the Indiana National Guard, which he's led since 2004.

A couple of years after the Sept. 11 terrorist attacks, the Army reactivated Camp Atterbury to mobilize soldiers deploying to Iraq and Afghanistan. Those troops required intense training in house-to-house fighting and urban warfare.

Umbarger says he realized there needed to be a more realistic training ground. He thought Muscatatuck, a recently closed state mental hospital that was just down the road, could become an urban training center.

"When I first heard of Muscatatuck, I really figured it would be a bunch of broken-down buildings and when I went down there and got out and said, 'Oh my God, these buildings are in great shape. This is a city,' " Umbarger says.

Over the next decade, the Army spent $300 million to upgrade Atterbury and Muscatatuck, including an $84 million barracks complex and a second set of railroad tracks. In 2013, it processed 119,000 troops, mainly from units heading back home. 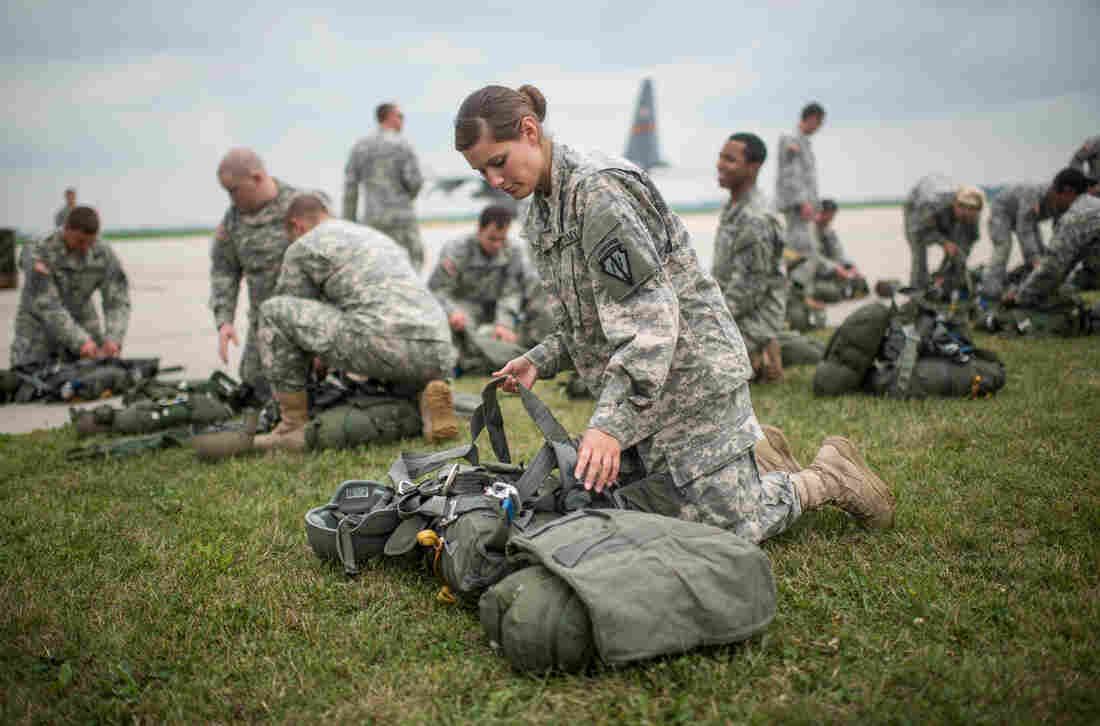 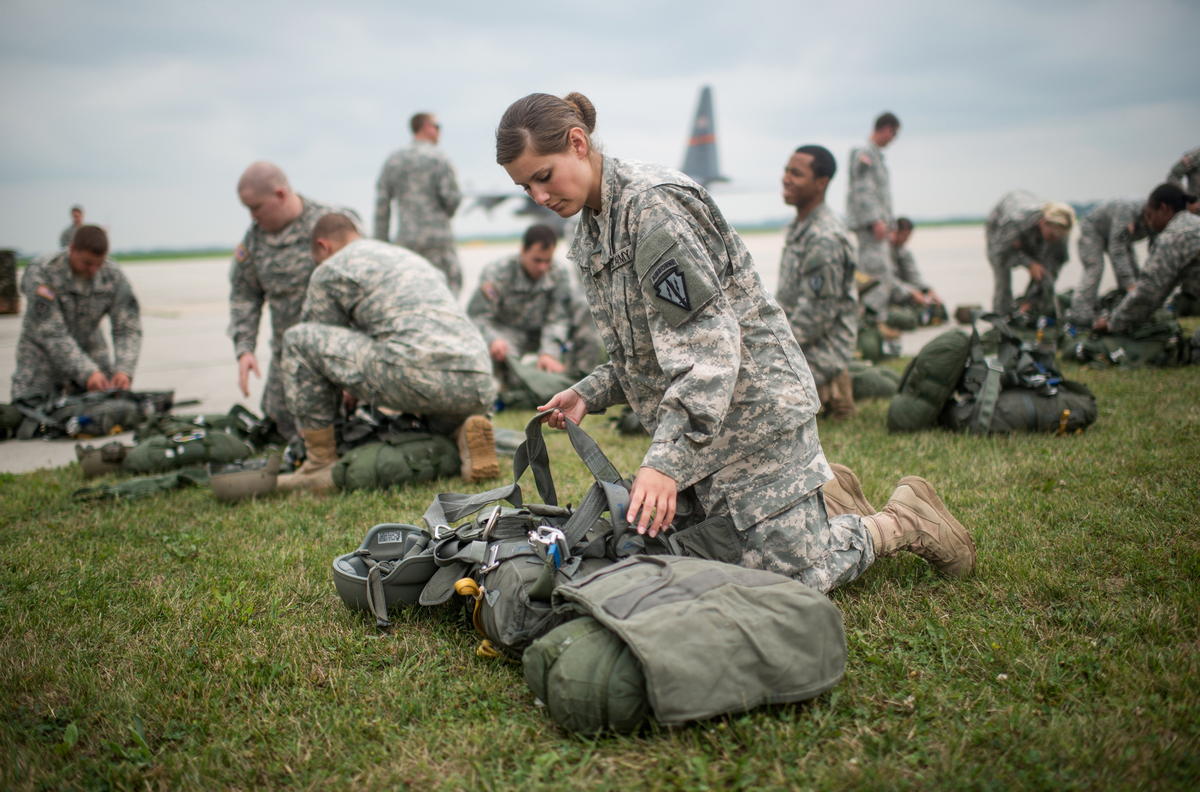 But coming home has become an issue. By the time all that money was spent on the new barracks, the wars were basically over. Atterbury had finished mobilizing troops, so that mission was gone. The base lost 160 jobs. And there's been a ripple effect.

Outside the base, at Sherman's Barbershop in nearby Edinburgh, Ind., Richard Pile was cutting a soldier's hair "high and tight." Sherman's opened in 1942, the same year as the base. As recently as 2013, the shop would sometimes see busloads of troops.

"They lined up out the door, all the way down the street," says Pile, one of the shop's owners.

He says business dropped off last year, though the base is still important to the small town.

Those soldiers also filled hotels and restaurants. A 2012 report from Indiana University showed Atterbury brought in nearly $400 million a year to the state.

The challenge for Atterbury now is to stay relevant.

It's been marketing itself to new customers besides the Army, such as contractors who need a training ground.

The National Guard's argument is that after spending $300 million, Atterbury/Muscatatuck is a good location for anyone who needs to simulate an urban environment on a large scale. For a price, you can break down doors and smash windows. 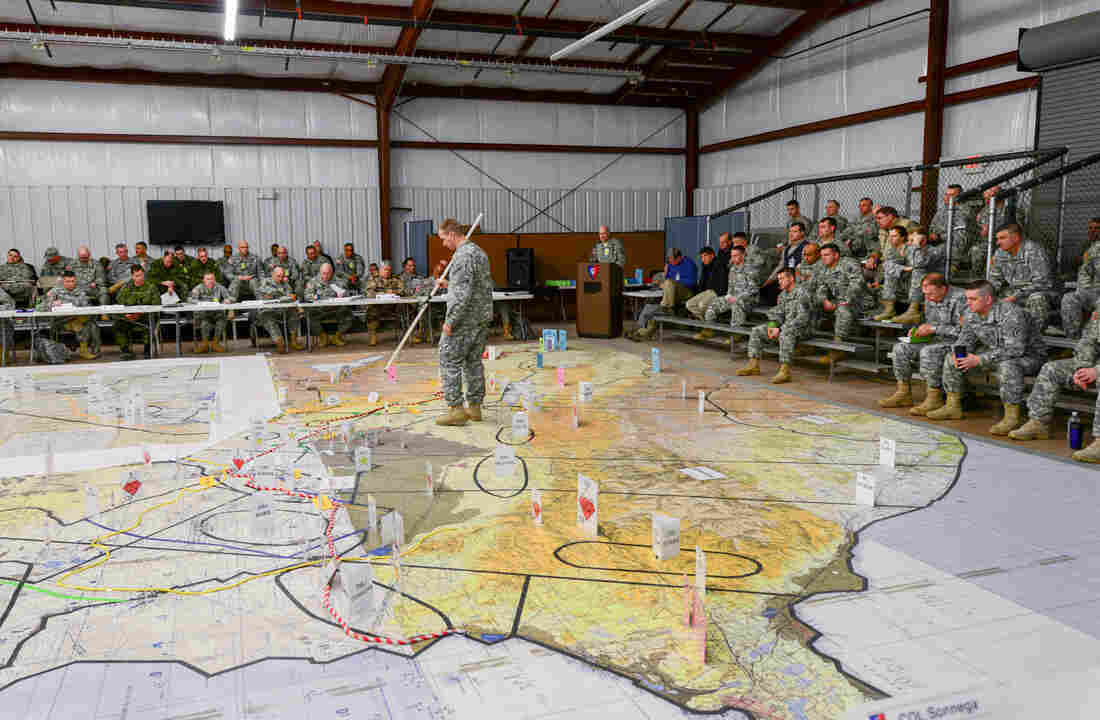 Service members at a 2015 war-fighter exercise participate in a combined arms rehearsal at Camp Atterbury and Muscatatuck. The Indiana National Guard is hoping its base will continue to serve organizations that need training facilities. Camp Atterbury Public Affairs via DVIDS hide caption

All that marketing keeps Atterbury on the Army's radar, too. That's why the base just hosted a war-fighting exercise for 3,500 troops from the Guard, active-duty Army and the Canadian Army.

All those soldiers recently filled a 24-hour mess hall, staffed by a private contractor. Staff Sgt. Peter Murdock of Indianapolis, who was attending the event, says when he joined the Guard seven years ago, there was a lot less building.

But now, in the past couple of years, he says: "You can definitely tell it got quieter."

Still, Atterbury's found a niche. There was a time after World War II when cattle and sheep roamed a largely shuttered base. This time, the Guard is getting creative to make sure that doesn't happen again.