Accessibility links
'One Of Us' Is A Difficult, Unforgettable Look At Tragedy Journalist Åsne Seierstad's new book retells the story of Norway's Anders Breivik, from his troubled, violent childhood to his 2011 killing spree. Critic Michael Schaub calls it a painful masterpiece. 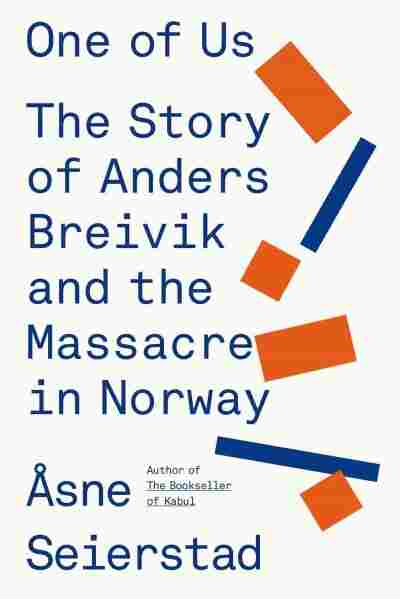 The Story of Anders Breivik and the Massacre in Norway

One of Us opens with a girl running for her life. She and her friends are being stalked, hunted by a young man in a police officer's uniform on the small Norwegian island of Utøya. They lie down in the woods, pretending they're dead, hoping the man will see them and move on. He doesn't. He shoots the girl in the head, shoots her friends in their heads, point-blank, execution-style. In search of new victims, the man moves on. But almost four years after that July day when 77 people, many of them children, were slain in cold blood, the nation of Norway still struggles to move on.

The man was Anders Breivik, the homegrown Norwegian terrorist who shocked the world with his 2011 massacre in Oslo and Utøya. A far-right opponent of immigration, "cultural Marxism" and feminism, Breivik killed eight people with a bomb in Norway's capital before fatally shooting 69 at a summer camp sponsored by the country's Labor Party. In her new book One of Us, Norwegian journalist Åsne Seierstad recounts Breivik's evolution from a troubled child to a wannabe teenage tagger to, as he would later brag to a lawyer, "the biggest monster in Norwegian history since [Fascist politician and Nazi collaborator Vidkun] Quisling."

Breivik's childhood was a sad one. He was raised chiefly by his mother, who seemed depressed and unstable, and who resented him as a young child, finding him "clingy, whining ... [m]oody and violent." He showed early signs of psychopathy, including cruelty to animals; his neighbors forbade their children from associating with him, especially when pets were involved. As a teenager, he developed an obsession with tagging — graffiti — hoping to become one of Oslo's preeminent practitioners of the street art. But even after a series of arrests, he was still regarded as a "toy," a wannabe: "He was behaving like a king, but he was only a toy."

Breivik's obsession with fascism, and his growing hatred of women and immigrants, especially Muslim ones, came slowly, although with obviously disastrous results. He locked himself in his room for years playing World of Warcraft, isolating himself from his friends, before becoming enchanted with the writings of several right-wing authors who warned that Europe was at risk of being ruled by Islamic law. He fantasized about bombing a journalists' convention, about attacking the Labor party congress with a flamethrower. Soon, he'd acquire firearms and bomb-making materiel. The rest, of course, is tragic, unspeakable history.

Seierstad's recounting of the massacre is one of the most difficult things imaginable to read. By the time Breivik makes his way to Utøya, the reader has learned about the lives of many of the children on the island — some from the idyllic towns of northern Norway, some children of an immigrant family who escaped war-torn Kurdistan to make a new life for themselves. The descriptions of the murders are vivid, sickening and heartbreaking.

Seierstad does an incredible job telling the whole story of the massacre and its aftermath, the deeply flawed response by law enforcement and the families who lost children. Her writing, translated into English by Sarah Death, is both straightforward and compassionate. She doesn't spare the reader's feelings; it's a deeply painful book to experience.

And that's the point, of course. The question the world asked after the Norway massacre, as it does after every one of these, was "Why?" What happened to Breivik to make him do this? The urge to demand an explanation is a natural one. One of Us does not provide one, because there isn't one. Breivik, like so many terrorists and murderers, is beyond explaining. It's a difficult conclusion to reach, but, as Seierstad knows, it's often a necessary one.

One of Us is a masterpiece of journalism, a deeply painful chronicle of an inexplicable and horrifying attack that we'll likely never understand. It ends where it has to — with families still struggling to pick up the pieces of their lives. And with Breivik, in jail, pathetic and broken and whining about the justice system that put him away. In the end, it's the victims and their families that Seierstad cares about; they're the ones we'll remember, whom we'll keep with us. Breivik, who wanted nothing more than for the world to know his name, becomes a footnote in his own story, a sad man who wanted to change the world, but instead strengthened the resolve of the people he terrorized — the least memorable character in this chapter of history, and in this brilliant, unforgettable book.