Accessibility links
It's The Fuzz! Cat Detective Swipes A Claw At Crime In 'William' When the Mona Cheesa goes missing in Paris, "international cat of mystery" William is called in on the case. Helen Hancocks joins NPR's Scott Simon to talk about William & the Missing Masterpiece. 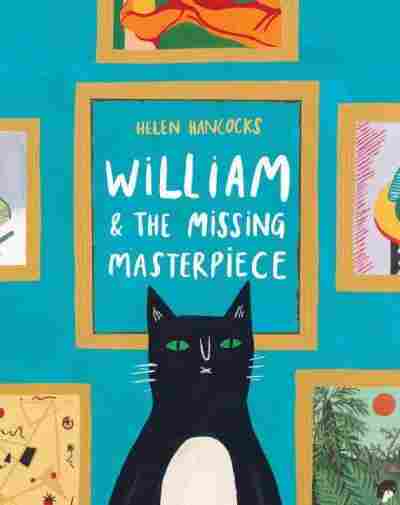 By Gouda — the Mona Cheesa is missing! And when that most famous work of art is discovered to have been taken from its frame in a Paris art museum, the world's foremost International Cat of Mystery, William, is called in on the case.

William & the Missing Masterpiece is the latest book — ostensibly for children — from Helen Hancocks, whose debut book, Penguin in Peril, was the best-selling picture book in the United Kingdom in 2013. She tells NPR's Scott Simon that sometimes pictures come first when she's thinking up a new book, and sometimes it's the story, but with William, "I had the character of William and just sort of started shaping the story around him and what his adventures would be. He's actually based on my cousin's cat called William," she says, "I would just sort of stare at him every visit and wonder what he got up to."

On the real William

He's the most handsomest cat you'll ever meet! His fur is so soft, and his eyes are brilliant green. He just has a definite character. He doesn't seem a normal cat — if he was a man, I think he'd be a very handsome man. And I don't know, he just has a bit of mystery about him. I guess that's why I had to write a story about him.

On learning to draw

My father was an art teacher, and my grandparents were both artists as well, so I definitely think I've got it from that side of the family. I mean, I've always been encouraged to sit at the kitchen table with whatever, like crayons or felt-tips and paint, and just be left for hours to carry on doing whatever I wanted.

On what she's learned about children by telling them stories

I think they're definitely a lot more alert and cleverer than I thought. They always think of a question which you've never thought of, and it always sort of surprises me how much they can take from the pictures and the words, and put their own interpretation on it that you'd never think of. They're so fascinating — I kind of forget that I was once that age, and was also fascinated by so many things, and it's sort of nice to be reminded of that.

Read an excerpt of William & the Missing Masterpiece